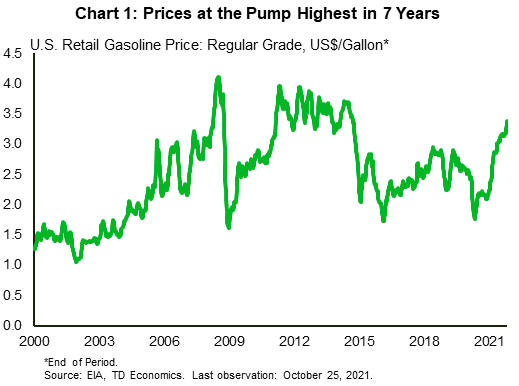 Drivers have been getting a big dose of sticker shock in recent months when filling up their tanks, with the average price of a gallon of gasoline topping $3 for the first time in seven years. Unfortunately, homeowners are also likely to face sizeable increases in heating costs this winter also. Since publishing our Quarterly Forecast in September, we have raised our price forecasts for both crude oil and natural gas (for more details see Commodity Report) and this will have an impact on the economic outlook. While these higher energy costs are likely to weigh on consumer spending in real terms, the impact on the broader U.S. economy is smaller than in the past. The shale revolution has dramatically increased domestic oil and gas production and eliminated the energy trade deficit, meaning much of the higher revenues for producers and knock-on investment provide a partially offsetting boost to the U.S. economy.

Simplistically, higher energy prices act like a tax on consumption, leaving less income to be spent on other goods and services, and the recent increases would be poised to shave roughly 0.3 percentage points of real GDP growth in 2022 and 2023, were it not for offsets from domestic production.  Estimating this lift is more uncertain in the current environment given labor shortages and supply constraints. Even with a likely net energy-related drag exerted on the US economy, we still see growth advancing at a very healthy pace. 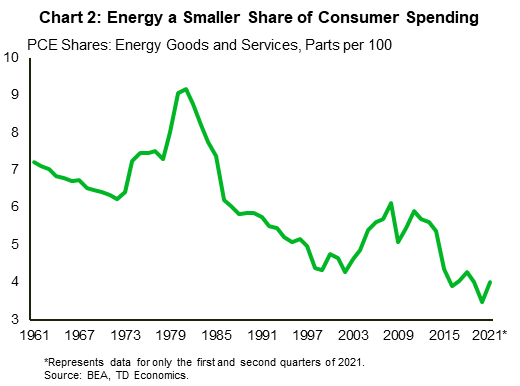 Just as consumers start hitting the road more frequently, not coincidentally, gasoline prices are about 60% above their year-ago levels (Chart 1). That’s not really a fair comparison since oil prices fell sharply earlier in the pandemic. However, even compared to two years ago, prices at the pump are up roughly 30% higher. Wholesale natural gas prices are up even more sharply, more than twice as high as they were in October 2019. The Henry Hub price of natural gas is at a level not witnessed in the shale gas era. Consumers may not feel it until they start paying winter heating bills, but the EIA is projecting that nearly half of American households that heat with natural gas will pay 30% more this winter, and even steeper increases for the roughly 10% that use heating oil or propane.

It will come as small consolation for many consumers whose budgets will be squeezed by the higher bills, but energy costs have a smaller impact on consumer budgets than they did a generation ago, at roughly 4% of expenditures (Chart 2). However, that number understates the impact for most households who face energy costs are roughly 8% of their total expenditures.1

We estimate our upgraded energy price forecast is likely to knock between 0.3-0.5 percentage points off real quarterly consumer spending growth through the end of 2022. This drag is coming against what was expected to be solid underlying consumer spending growth of around 3% in 2022, boosted by pent up demand for travel and services.  Hence, this headwind is enough to put a dent in household spending, but far from derail it.

One potential offset could also come from the $2.7 trillion in excess savings (see report) consumers have built up over the pandemic. These could be spent to a greater extent than we currently assume to help cushion the impact. Also, the gains in energy bills are coming at a time when wage gains are picking up for many workers.

The cost impact on consumers and business would have been the bulk of the story 15 years ago, but the U.S. energy picture has changed since the shale revolution dramatically increased domestic oil and gas production. As a result, the U.S.’s longstanding energy trade deficit has tipped narrowly into surplus in recent years (Chart 3). That means more of the “benefits” of higher prices in terms of increased revenues and investment in the sector, and knock-ons to related industry is reaped by the U.S. economy.

Based on past relationships, the increased investment in the oil and gas sector, all else equal, could boost GDP growth by 0.1%-points in 2022, offsetting a portion of the hit to consumer budgets. And there would likely be multiplier effects to industries that support the sector, making that estimate likely on the low end.

Economic research2 examining the impact of the plunge in oil prices in 2014 found that the initial stimulus of lower oil prices was largely offset by the reduction in real investment in the oil sector. (Or in fact was a very modest positive, adding 0.2 percentage points to annual GDP growth.) The key uncertainty is whether the impact will be symmetric with the recent increase in prices. 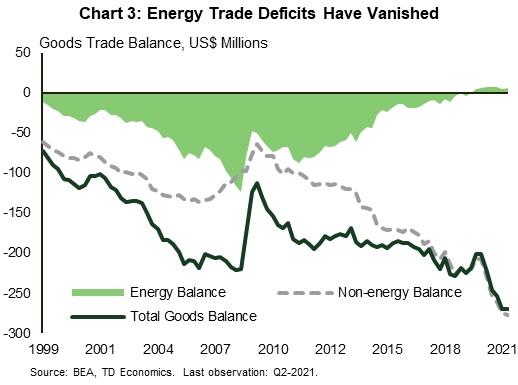 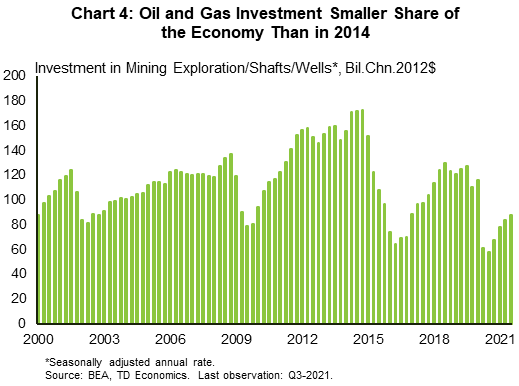 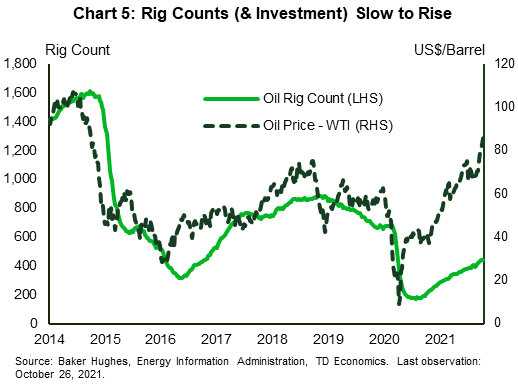 Anecdotal evidence suggests the boost could be smaller in the current environment. For starters, investment in the oil and gas sector was a smaller share of the economy immediately prior to the pandemic than it was back in 2014. Investment in mining exploration, shafts and wells has been rising at a rapid clip over the past four quarters, in line with the recovery in oil prices (Chart 4). However, its influence on growth is smaller than it was in the 2014-2015 period of price declines, suggesting less of a offset than was experienced in that episode.

Second, the oil and gas sector is facing similar constraints on resources and labor as the rest of the economy. It may not be able to ramp up as quickly as in the past given the recent heightened producer focus on capital discipline. So far, rig counts have not risen as much as recent price gains suggest based on past relationships (Chart 5). These themes were echoed in the Fed’s recent Beige book, which cited growth and optimism in the sector. At the same time, ,the report stated that supply chain problems continued to worsen, increasing lead times and raising the cost of production.

The dramatic run up in energy prices is likely to see costs remain above what we previously expected for some time. This is expected to weigh on consumer spending in the near term, though mitigated to some extent by offsets from excess savings and rising wages. But, when it comes to the overall economy, the effect on growth in 2022 is likely to be quite modest, or roughly two tenths of a percentage point. With the U.S. economy expected to run in the 3.5-4% range next year, that represents a modest drag, thanks to the offsetting impact from domestic production.