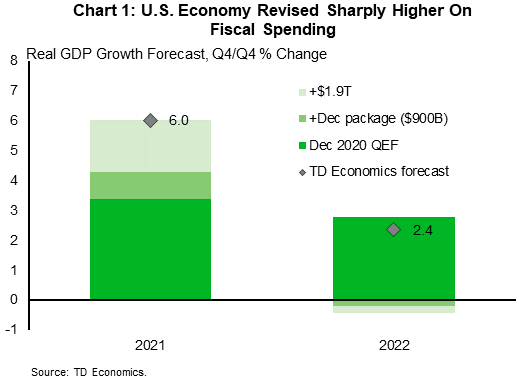 The U.S. outlook has been upgraded substantially since December, thanks to more than $2 trillion in additional fiscal support than we included at that time. In late December, Congress passed a $900 billion relief package, larger than the $400 billion package that we embedded at the time we published our forecast. The $600 per person in direct payments have already boosted consumer spending in recent high-frequency data, resulting in notable upgrades to economic growth in the first quarter of 2021.

Now, the new Democratic majority in Congress looks poised to pass something close to the $1.9 trillion mark noted in President Biden’s American Rescue Plan in the coming weeks through the budget reconciliation process. Our updated baseline forecast, which includes the bulk of this package, is shown in Table 1. This represents a substantial upgrade relative to December (Chart 1). Real GDP is now projected to expand by 5.7% (annual average) in 2021, up from 4.1% in December. This corresponds with a lower unemployment over the next two years, reaching 3.8% in 2022. Without another substantial fiscal policy boost in 2022, subsequent fiscal consolidation has lowered our forecast on a quarterly basis in 2022, but the strong hand off from 2021 still results in an upgrade on an annual average basis to 4.0%, from 3.3% in December.

There is a high degree of uncertainty in the forecast, as it depends on assumptions about how much of the next round of relief checks is spent versus saved, and how quickly government spending is rolled out. Still, the size of the fiscal package, at over 9% of GDP, is too large to ignore, and comes as solid progress on vaccine distribution leaves us increasingly confident of a notable pick up in activity as the year progresses.

Financial markets have already moved to price in more generous fiscal policy. Faster growth and rising inflation expectations have been a key driver of recent moves in bond and equity markets. At the start of the health crisis in March 2020, the S&P 500 Index saw a peak-to-trough decline of over 30%, while inflation expectations were pricing an economy that would experience years of low inflation. Since then, the equity market has accelerated past pre-pandemic levels and market-based inflation gauges have risen above the Federal Reserve’s 2% target.

Considering the significant upgrade to the economic outlook, we have pulled forward our expectation for the Federal Reserve to begin raising the federal funds rate by about six months, to the third quarter of 2023. However, before any rate hike occurs, the central bank will need to address its balance sheet policy. Currently the Fed is buying $80 billion in Treasuries and $40 billion in Mortgage-Backed Securities per month. The Fed has stated that it plans to continue these purchases “until substantial further progress has been made toward the Committee’s maximum employment and price stability goals.” We expect this to occur by the mid-point of 2022, when the unemployment rate is likely to push below the FOMC’s median longer run forecast of 4.1% and inflation is likely to be comfortably above 2%.

Still, the Fed will have to be careful with its communication on asset purchases. In 2013, when Fed Chair Ben Bernanke casually mentioned that the Fed was considering adjusting QE, markets immediately started pricing the removal of monetary accommodation. Even though the Fed did not adjust policy until January 2014, the rapid shift in expectations caused the 10-year Treasury yield to rise from 1.7% in early May 2013, to almost 3.0% by the beginning of September 2013. Right now, the Fed has expectations pinned down through forward guidance that conveys a central bank that is not thinking about raising rates or adjusting QE. The moment it changes this communication, it may be accompanied by a swift jump higher in yields.

We see government yields continuing to move higher, with a year-end target of 1.60% for the 10-Year U.S. Treasury yield by the end of this year. This assumes that markets will continue to reprice expectations for the federal funds rate as stronger growth materializes.