Will the U.S. Economy Ride the Blue Wave?

A lot has changed in the month since we published our forecast in December. The pandemic has worsened, and vaccine rollout has arguably not been as quick as we had hoped. Fortunately, Washington passed the $900 billion Coronavirus Relief & Recovery Supplemental Appropriations Act (CRRSA Act), which extends a lifeline to many out-of-work Americans and struggling businesses and has resulted in an upward revision to baseline growth in 2021. Overall, federal Covid-19 relief passed thus far has cost roughly $3.4 trillion, or about 16% of nominal GDP – an unprecedented response to a once-in-a-lifetime health crisis. Now that Democrats have won a fingertip hold on a Congressional majority, the Biden administration plans to add further assistance, and has a greater ability to implement its campaign priorities. Ultimately, what they can achieve is, as always, contingent on negotiations in Congress, but the probability has shifted enough that a more systematic analysis is due.

Ever since the Democrats won the Georgia Senate runoff elections on January 5th, markets have moved to price in faster growth and higher inflation due to expectations for a dramatic increase in fiscal assistance. Last Thursday, President-Elect Biden announced his first plan to help get the economy back on its feet and help bring the Covid-19 pandemic to an end. The American Rescue Plan totals $1.9 trillion dollars and includes direct assistance for households, spending to deal with the health crisis and funding for businesses, state and local governments to help cope with the ongoing hit to revenue from the pandemic (see Table 1 for a summary of key elements).

President-Elect Biden has indicated that this is the first phase of his policy agenda. The second is expected later this year and would seek to implement more of his campaign commitments, such as funding for green infrastructure, higher education and health care. This would also likely include tax increases on higher income Americans and corporations to help offset the costs. (For more details on Biden’s election platform, see our earlier report). The details of this second phase are more uncertain and will likely depend on the course of the economy, the pandemic and how receptive Congress is.

In the meantime, the American Rescue Plan presents a material upside risk to our forecast for economic growth released in December. However, the degree of upside is highly uncertain. Democrats only have the narrowest majority in the Senate. They will need support from Democrat and Republican Senators to get the 60 votes required to avoid a filibuster. So far, some aspects of the plan – most notably the $1,400 checks to all modest income Americans – have proved less popular. It seems almost a foregone conclusion that the package will end up being negotiated down before it is passed.

Given the uncertainty, we have estimated the impact of three potential policy scenarios on our baseline forecast. The scenarios are as follows:

The CRSSA Act signed into law over the holidays was larger than we had assumed in our December forecast. Passage was highly uncertain at the time of our forecast, and, as such, we had assumed a $400 billion package. As a result, even before we estimate the potential upside risk to the outlook from the Biden plan, the baseline forecast has been upgraded to incorporate the extra spending.

Partially offsetting the full impact of the CRRSA Act, economic activity slowed more than we had expected through the end of the year, reducing growth in the fourth quarter of 2020 and first quarter of 2021, before the impact of the CRRSA was added (Chart 1). On net, baseline real GDP growth is now expected to be 4% this year (on a Q4/Q4 basis), 0.6 percentage points higher than projected in December, even before we consider the upside risk from a potential American Rescue Act.

Assumptions Matter For Impacts, And Are Uncertain

At this stage it is highly uncertain what elements of the Biden plan will see the light of day.  As such, we have modelled top-line real GDP projections under three alternative scenarios (Charts 1 and 2). How much the various fiscal scenarios lift economic growth depends critically on various underlying assumptions. For example, in scenario 1, the economic impact of the $1,400 checks is determined by how much of the money is spent versus saved. It assumes that the checks are issued in Q2 2021, but are saved to a high degree, and the saving rate spikes in the quarter. The saving rate gradually returns to the baseline level by the end of 2022. How much consumers will spend is highly uncertain and depends on consumer confidence and the course of the pandemic. Ongoing restrictions and pandemic concerns could limit households’ desire and ability to spend. 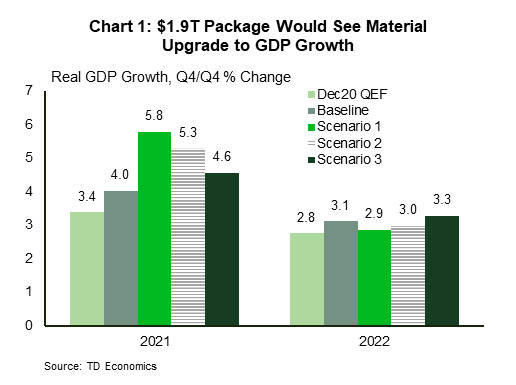 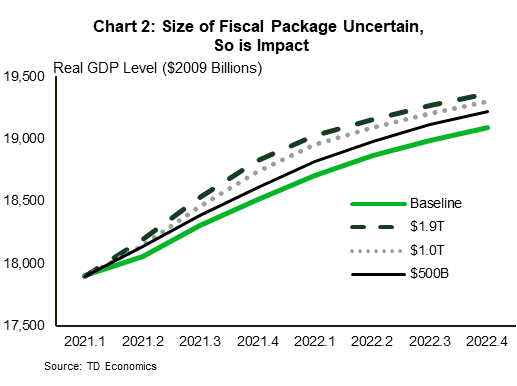 All scenario results are influenced by how quickly the government spending measures roll out. We assume the package is passed in March, but that the peak spending occurs in the third quarter of 2021, and then tapers back to baseline spending by the end of 2022. Government spending will likely take a bit longer to ramp up than direct payments to individuals. This assumption may prove optimistic, however, given much of the funding is to ramp up the health response to the pandemic, spending could flow quickly.

These forecasts for 2022 carry more uncertainty. If the administration can pass another package of longer-term spending and tax hikes later in 2021, this will likely have a major impact on projected growth trends in 2022 and beyond. The impact will depend on the nature of the spending and tax increases.

Nevertheless, the substantial upgrade to the growth outlook – especially under Scenarios 1 and 2 –would yield reduced economic slack and likely stronger inflationary pressures than in our baseline forecast. This would have implications for monetary policy and could lead to the Federal Reserve tapering its current asset purchases earlier than currently expected (see recent FOMC minutes). However, the Fed has communicated that it won’t respond to signs of inflationary pressures in the same way as in the past. It will need more evidence of a fulsome recovery before it eases its foot off the accelerator. Our current forecast expects the Fed to remain on hold until 2024. If all these fiscal measures come to pass and the recovery continues without a hitch, the timing on that may need to be moved up by a couple of quarters. Bond yields have already moved to price in higher inflation driven by more expansionary fiscal policy. This could limit any additional increases once the size of the program is ultimately decided, and could result in disappointment, if the relief package ends up being on the smaller side.

These scenarios illustrate the range of possible economic impacts depending on what Congress may plausibly agree to. It is very early days, and it remains unclear what Republican Senators will support. We think it is most likely an eventual package could be somewhere between scenarios 2 and 3, or $500 billion and $1 trillion. President-elect Biden has indicated a preference for working on a bipartisan basis, but if GOP Senators are not open to negotiation, Democrats could choose to use the budget reconciliation process, as the GOP did for the Tax Cuts and Jobs Act in 2017. They can only use this once per fiscal year, and it would likely delay when the next round of relief would get passed.