Excess Household Savings and Implications for Inflation in Canada 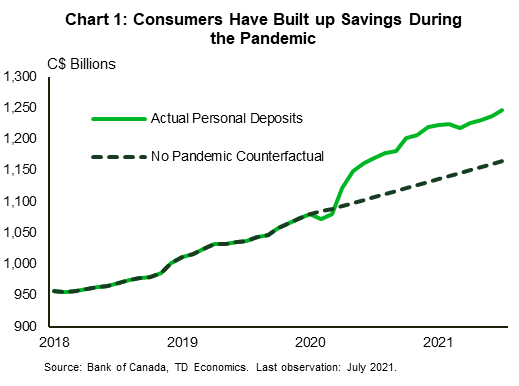 Canadians have amassed a record amount of savings during the health crisis. By some estimates, consumers have built up $300 billion in excess savings over the course of the pandemic.1 This stockpiled spending firepower -- at a time of growing supply-side constraints – has contributed to worries that inflation could prove to be even higher and more persistent than currently thought.

While we too are mindful of this risk, there are a number of reasons to suggest that the inflation impulse from additional savings won’t be as hefty as some might believe. First, given that consumers have directed this bounty to a number of different purposes, the amount parked in highly liquid cash form is significantly lower than the headline estimate. Second, survey data indicate consumers will only gradually draw on these funds to finance purchases, thereby easing price pressures. And third, a reorientation of spending from goods to services could also moderate price growth as the former is experiencing far greater inflation due to supply-chain constraints.

Notwithstanding these mitigating factors, the pool of excess savings is large, with highly uncertain implications for both consumption and inflation moving forward. No doubt, this upside risk was a key consideration behind the Bank of Canada’s decision to signal earlier interest rate increases at last week’s rate announcement (a shift that led us to adjust our rate call as in Dollars and Sense). Furthermore, as we discuss below, the central bank incorporated what we believe to be a reasonable assumption around spending out of the accumulated savings in its baseline economic outlook.

Only A Share of Excess Savings Can Be Easily Spent

Consumer savings grew rapidly during the health crisis. Public health restrictions limited discretionary spending, while the extraordinary nature of the crisis brought forth precautionary behavior, both of which boosted household savings. According to national economic accounts data, accumulated savings from first quarter of 2020 to the second quarter of 2021 was close to $300 billion (13% of GDP) larger than what it would have been if households continued to follow 2018-19 saving patterns.

Households have already tapped into some of these funds to pay down debt and/or invest in real or financial assets. On the former, multiple surveys, including the Bank of Canada’s Survey of Consumer Expectations, found that respondents had used a portion of their built-up savings to pay down debt since the pandemic struck. Indeed, just before provinces moved to reopen their economies in June this year, non-mortgage debt balances were down $10 billion relative to the February 2020 level. In addition to reducing debt burdens, Canadians directed a part of their additional saving towards securing real estate assets. The housing market was in a frenzy through much of the pandemic period, and excess savings enabled many to get in on the action. Some individuals also bought financial assets using these funds.

As a result, a significant share of excess savings may not be easily accessed or deployed towards near-term consumption. This implies that consumers’ spending firepower from excess savings is lower than the headline $300 billion estimate suggests. 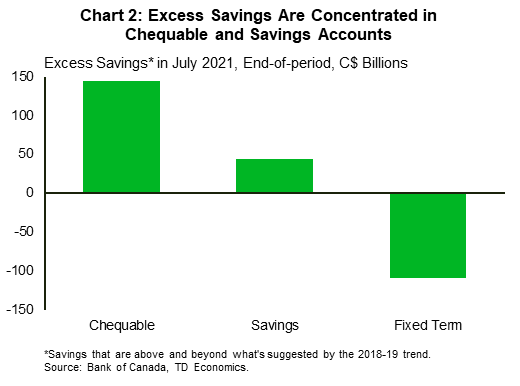 Personal deposit balances provide a better gauge of near-term consumer spending potential. Like total savings, deposit balances took a level shift up at the beginning of 2020 and have remained elevated (Chart 1). As of July 2021, there were $80 billion in additional savings in personal deposit accounts relative to pre-pandemic trends. However, looking deeper under the hood across personal deposit categories, we find that funds accumulated in chequing and savings accounts increased, while fixed-term deposit balances declined (Chart 2). At the end of July, there were about $145 billion in additional funds in chequable deposits, about $45 billion in savings, and $110 billion less in fixed term deposit accounts.2 As money in the former two accounts are in highly liquid cash form, this indicates that consumers have built up $190 billion that can be easily accessed and deployed towards consumption purposes in the future.

Canadians’ spending arsenal could be amplified by strong positive wealth effects emanating from solid advances in household net worth over the pandemic period. From the first quarter of 2020 to the second quarter of 2021, household net worth increased by 26%, or $3 trillion. Rising home prices and continued stock market gains were major contributors. With Canadians feeling wealthier, they could be tempted to loosen their purse strings even further as provinces continue lifting restrictions.

At the same time, however, consumers are likely to only gradually draw on their excess savings for consumption purposes due to many competing priorities. In past consumer surveys, respondents reported that paying down existing debt is an important objective. Some said they would use the cash to finance down payments for homes or buy financial assets. In the recent Bank of Canada Survey of Consumer Expectations, respondents said they had intended to spend about one-third of their accumulated savings by the end of 2022.  If one uses the $190 billion in deposits as an approximation of what households have considered “savings”, that implies a spending impulse of around $60 billion over the next several quarters.

Even at that lower amount, $60 billion still represents a sizeable 3% of GDP and has the potential to further stoke already bubbling price pressures, especially at a time where supply-side constraints are leading to shortages across a number of sectors. It remains unclear, however, as to the speed in which consumers will draw on their savings. A faster drawdown would have greater inflationary impacts. 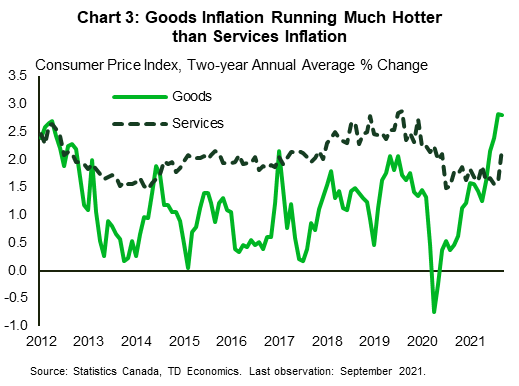 Some of those price pressures are likely to be alleviated from the reorientation of consumer spending from goods to services. Goods inflation is running much hotter than that of services recently, owing in part to supply chain disruptions3(Chart 3). Since provinces began reopening, goods inflation has continued to climb, reaching 2.8% on a two-year annual average basis in September, meanwhile, services inflation was 2.2%.4 Given that consumers spent heavily on goods through much of the pandemic, and that there is far greater pent-up demand for services such as travel, in-person dining and recreation activities, households are expected to redirect a greater share of outlays towards these services. Already, high frequency consumption data indicate a reorientation of spending from goods to services in recent months (see report). This rotation could help to ease pressure on stretched supply-chains and, thus, lead to some inflation relief.

That said, a solid ramp up in services consumption could increase service inflation over time. For instance, with strong consumer demand, labour shortages present in certain service sectors may worsen (see report), and businesses may need to raise wages to attract new workers. If firms pass on these costs to consumers, inflation would accelerate.

No matter how you slice it, the amount accumulated in savings is large and unprecedented. But then questions arise around to what extent households may be willing to part with these cash balances as well as when they choose to spend this money.

In the October MPR, the Bank of Canada adopted what we believe to be a reasonable assumption around the boost to consumption from excess savings in its baseline forecast. By our estimates, the Bank embedded around $40 billion increase in spending through a drawdown in excess savings over the three-year projection. In their forecast, this contributes to robust consumption growth of around 5% to 6%, and above-target inflation of 3.4% in 2021 and 2022. There are upside risks to this view. If consumers spend the full $60 billion as they had indicated in the Bank’s own survey, this could lead to higher inflation in the near and medium term.

Tough Decisions Ahead for The Bank of Canada

Despite the uncertainty around future consumer spending behavior, it’s clear that excess savings could move price growth into overdrive in the coming quarters. Indeed, combined with ongoing supply constraints and continued reopening impacts, inflation is likely to remain above the Bank of Canada’s target range of 1% to 3% well into 2022, with an appreciable risk that it remains above in 2023 as well.

The Bank of Canada responded to these concerns in last week’s monetary policy decision. The Bank ended the quantitative easing program and tweaked its forward guidance, moving forward when it expects economic slack to be absorbed and the 2% inflation target to be sustainable achieved from the second half of 2022 to the middle quarters of that year. Given the aforementioned risks to inflation, we expect the Bank will hike rates three times in 2022, beginning in April, taking the overnight rate to 1.0% by the end of the year.

So far, the Bank has shown great nimbleness in its ability to shift communication in response to evolving economic conditions. It will continue to do so given the extraordinary amount of uncertainty still present in the economy. A resurgence of COVID-19 may weaken the recovery such that more monetary stimulus is needed. At the same time, a faster-than-expected acceleration in household spending, will mean a quicker rise in interest rates. The Bank will be monitoring developments closely, and if there are signs that its economic winds are blowing its narrative off course, expect a change in communication sooner rather than later.