Explaining the Malaise in U.S. Investment:

The Role of Uncertainty 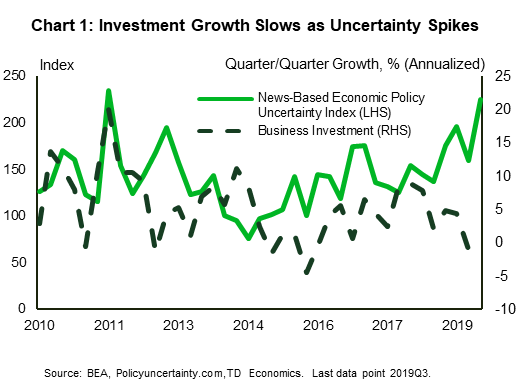 Imagine a deep fog that considerably limits your vision. You can only see a few feet in front of you. You can keep walking forward, but you’re not really sure of what’s coming up ahead. You’re likely to move slowly and may just stay where you are until it passes.

This is something like the situation facing many U.S. firms. Volatile policy-making, a fragile global economic environment, and the U.S.-China trade war have combined to put businesses under a deep fog of uncertainty. Without a better understanding of what policies might unfold, businesses have been less enthusiastic in making longer-term investments. Since early-2018, as uncertainty spiked, investment growth slowed, even turning negative in the second and third quarters of 2019 (Chart 1).

Equipment spending has borne the brunt of the uncertainty impact. By our estimates, the amount of investment in equipment would have been 4% higher if the rise in uncertainty in 2018 and 2019 had not occurred. Unsurprisingly, perhaps, the equipment categories facing the steepest losses are those caught in the middle of the U.S.-China trade war: information processing, transportation, and furniture and fixtures.

Slower investment growth reduces the pace of capital accumulation and, all else equal, means weaker productivity growth. A more certain economic environment would help bring investment back off the sidelines and give a lift to the U.S. economy in both the short and long term.

Economic policy uncertainty (EPU), a commonly used proxy for uncertainty, has seen a steep increase over the last few years, with the measure accelerating in 20181.  In the third quarter of 2019, the EPU index surged to its second highest level since 1985. The last time uncertainty rose by this magnitude was when the U.S. debt ceiling dispute dominated newspaper headlines in 2011. 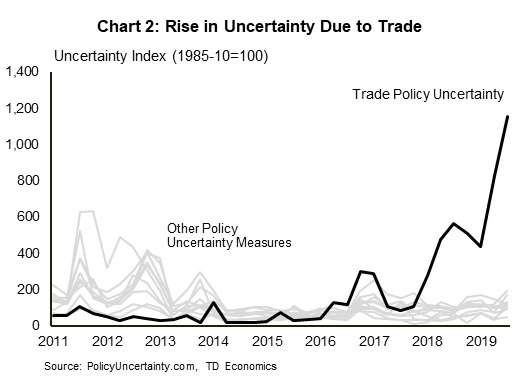 Informing the aggregate EPU index are categorical sub-indices that include monetary policy, fiscal policy and taxes. Unsurprisingly, among the various categories of uncertainty, it was only trade uncertainty that sky-rocketed through 2018 and into 2019 (Chart 2).

The rise in trade uncertainty reflects the actions taken by the U.S. administration. In around late-2017 and early-2018, the administration opened investigations into a plethora of trade practices including those concerning solar panels, washing machines, steel and aluminum, automobiles and, of course, Chinese trade practices. Soon after opening investigations, the administration moved swiftly by first imposing tariffs on a number of these products from countries around the world, prompting retaliatory tariffs from affected nations such as Canada, Mexico, and China.

Without a clear sense of direction for these conflicts, or how they might be resolved, trade policy uncertainty climbed quickly. At the same time, there were rumblings of a trade war with China. Indeed, in July 2018, the U.S. imposed its first round of tariffs on China, resulting in counter tariffs of the same magnitude by China.

From there, the trade war worsened with additional tariffs enacted by both sides. The global trade environment was rocked by the volatility of the talks, and trade uncertainty soared. Businesses were left without much guidance or clarity on the status of the trade negotiations and this in turn had unintended consequences for investment in America.

When uncertainty first picked up, business investment growth was coming off a fairly steady upward rise from a contraction in 2015 (Chart 3). Over 2016 to 2017, the major components of investment —structures, equipment, and IPP— all saw growth trend higher. 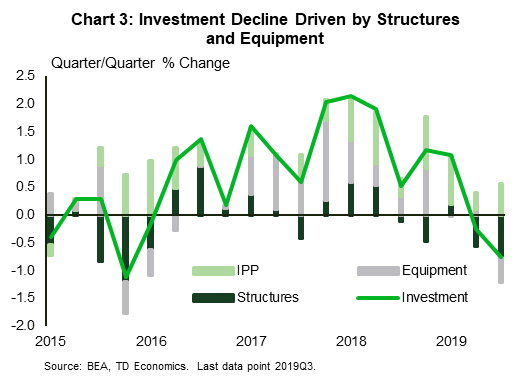 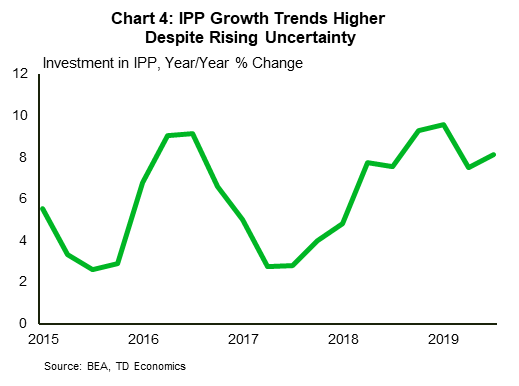 However, in 2018, with the rise in uncertainty, investment started trending downwards. It would appear, from first glance, that uncertainty played an important role in weakening investment growth. But, it’s important to remind ourselves that other factors could also have influenced investment. Topping the list are the hikes to the federal funds rate through 2018 and softening global growth.

Investment in intellectual property products is an area of investment that appears to be least affected by rising uncertainty. Since slowing through 2017, IPP investment growth trended higher, brushing off any ill-effects of uncertainty along the way (Chart 4). Indeed, our model suggests that uncertainty did not have a statistically significant impact on IPP investment.

Growth in IPP has consistently outpaced that of the other components over the past two years, underlining the robust nature of investment in this area of the U.S. economy.

Given these facts, it’s not surprising that equipment investment growth exhibits a negative correlation with uncertainty starting in 2018. But this is a correlation and not causation. To establish a causal link, we rely on our model results. 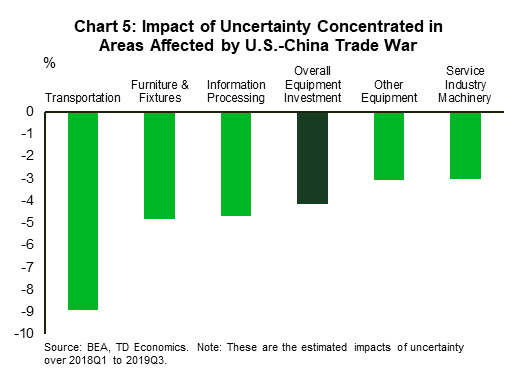 Our model yields statistically significant evidence that uncertainty has had a negative impact on equipment investment. We estimate that over and above any tariff-induced price effects, uncertainty reduced the amount of equipment investment by 4% from the first quarter of 2018 to the third quarter of 2019 (Chart 5). This roughly translates to -0.2% on the level of U.S. GDP.  There are, however, large error-bands around these estimates. The impact could have been as large as 8% on equipment investment, which would imply -0.4% on U.S. GDP at the end of the third quarter this year.

Within equipment investment, we find that the impact of uncertainty is concentrated in areas most affected by the U.S.-China trade war. Rising uncertainty took 9% off of the level of investment in transportation equipment, while investment in furniture and fixtures, and information processing equipment saw a 5% impact.

Interestingly, uncertainty also weakened investment in service industry machinery, indicating that uncertainty effects have also been felt in areas not directly caught in the U.S.-China crossfire. With incoming tariffs set to cover nearly all capital equipment imports, we may see uncertainty shocks rise in magnitude, while spreading to other areas of equipment investment. 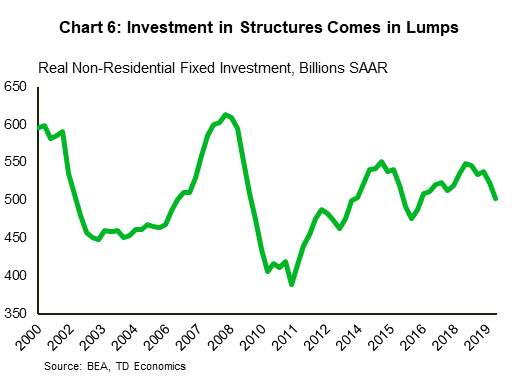 Surprisingly, from a model standpoint, uncertainty appears to have no discernible impact on structures investment. This is likely due to its lumpy nature (Chart 6). Firms typically spend a lot of money over a relatively short period to build, for example, new office buildings, factories, malls etc. And once a project is underway it is difficult to turn off the spending taps, despite changes in uncertainty. This results in an almost zero correlation between uncertainty and structures investment.

However, this doesn’t mean that the recent pickup in uncertainty had zero impact on structures investment. Building projects are very expensive and must fit within a firm’s long-term plans. If uncertainty is fogging up the outlook, it is likely that firms will think twice before investing. This might be a reason why, amid the surge in uncertainty, structures investment growth weakened since 2018.  Indeed, in real terms, the amount of spending on structures is now 7% lower than the average in 2018.

Other factors holding back investment in structures are further explored in the text box below. 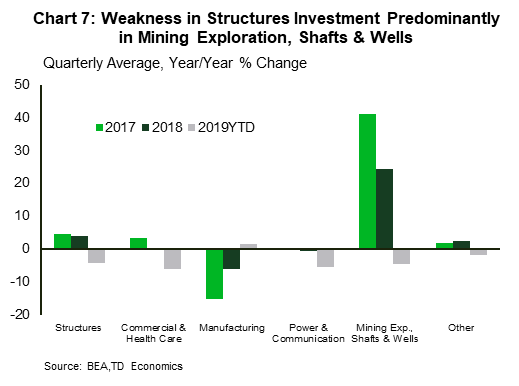 Average quarterly investment growth in mining exploration, shafts and wells—which represents oil-related structures investment—fell sharply from 35% in 2017 to -5% so far in 2019, the greatest decline of all the sub-components of structures investment. It is likely that despite the advances made in oil drilling technology, producers were unable to maintain the shale industry’s rapid pace of expansion observed in 2017. More recently, operational issues and innovation plateaus have also hit the industry, further weakening investment growth.4

As uncertainty continues to hold back investment, U.S. productivity growth stands to suffer. Indeed, without a sense of what future policy might look like, firms have tightened their belts and have opted to rein in investing in longer-term purchases like equipment. If uncertainty remains at an elevated level over an extended period, it could lower the amount of capital in the economy, thus weakening productivity.

A resolution to the U.S.-China trade war could help boost investment, but it is unlikely to occur immediately. Firms will need to be convinced that policy-making has entered a new regime and is not as volatile as it has been over the last few years. If we entertain a scenario where this does occur, and uncertainty returns to a level more in line with historical standards, equipment investment could increase by more than 7% over the next two years.5 But current events suggest this is an unlikely outcome.

Instead, supply chains appear to be rearranging, and deglobalization risks are rising. Taken together, this implies that we have not yet come to a stable equilibrium for investment to start flowing again. Until then, it is likely that we will see lackluster investment growth for some time to come.

Economic policy uncertainty has risen considerably since 2018 owing in large part to the U.S.-China trade war and the volatile nature of the negotiations. Reacting to a cloudier outlook on economic policy, American firms have moved investment to the sideline, with the impact most noticeable in equipment investment.

As the negative impact of uncertainty grows, the U.S. economy could be put on a weaker long-term growth path. Less investment in capital, could reduce productivity growth from its already low level. A resolution in the trade conflict could help kick-start investment, but the real challenge is convincing firms that there is more certainty to economic policy. Without this step, don’t expect a big rebound in investment anytime soon.