U.S. Mortgage Rates Are At Record Lows. But Why Aren’t They Lower? 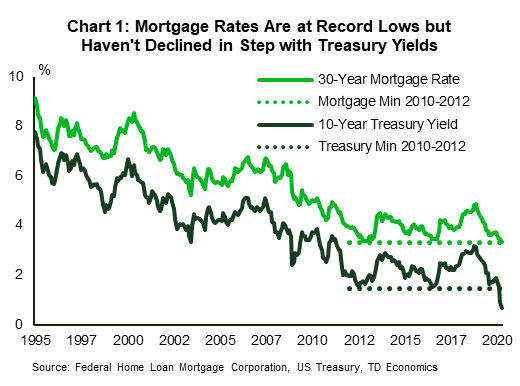 The most common residential mortgage rate in the U.S. - 30-year fixed-term conforming – declined to 3.23% over the past few weeks, the lowest level on record. This follows a series of aggressive measures undertaken by the Federal Reserve (the Fed) to maintain financial stability and ease credit conditions. When the unprecedented nature of the economic impact caused by the coronavirus pandemic became more apparent in early March, the Fed responded swiftly. The fed funds rate was cut by 150 basis points in less than two weeks. Treasury yields declined to record lows. From this perspective, one might conclude that the Fed has been effective in easing credit conditions. However, Treasury yields have declined by much more than mortgage rates (Chart 1). The spread between the 30-year mortgage rate and the 10-year Treasury yield widened from 1.7 percentage points in mid-2019 to 2.7 percentage points in April, the highest level since the global financial crisis. This indicates that the mortgage market has not fully benefited from the easing in credit conditions.

Why hasn’t the decline in Treasury yields been fully transmitted to mortgage rates?

The spike in mortgage spreads coincides with the financial turmoil that erupted in mid-March when extreme volatility in equity, fixed-income, commodity, and foreign exchange markets led to a “dash for cash”. Investors quickly sold off a broad range of assets to purchase the most safe and liquid assets (short-term U.S. Treasuries). The sell-off drove up yields on a wide variety of financial instruments, including Mortgage-Backed Securities (MBSs). 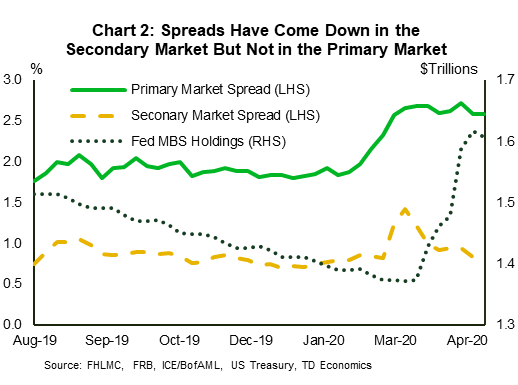 Rates on mortgages originated in the “primary market” are heavily influenced by financing conditions in the secondary market. Most mortgage originations in the U.S. are securitized (packaged into MBSs) and sold to government-backed agencies Fannie Mae and Freddie Mack (“Fannie & Freddie”), who insure them and sell them on to investors in the “secondary market”. The price that Fannie & Freddie pay for MBSs is largely determined by their price in the secondary market, which has a major influence on the rate at which mortgage originators offer to households. Effective yields on MBS portfolios (the inverse of MBS prices) tend to move in line with mortgage rates.

The sell-off in MBS holdings in mid-March reduced their price, widening the spread between effective yields on MBS portfolios and Treasury yields. On March 23rd, the FOMC announced that it would purchase Treasury securities and agency MBSs “in the amounts needed to support the smooth functioning of markets.” So far, the Fed’s MBS holdings have increased by $234 billion (as of May 7th), reaching $1.6 trillion. Secondary market spreads declined to pre-March levels. However, spreads in the primary market remain elevated (Chart 2).

What can account for the deviation between rates in the primary and secondary markets?

An important difference between the markets is that agency MBSs are insured by Fannie & Freddie, which protects investors from default risk (foreclosures and mortgage modifications). An increase in default drives a wedge between primary and secondary market rates.

It’s not difficult to understand why mortgage lenders might be concerned about a major deterioration in the credit quality of households in the current environment. The unemployment rate spiked to 14.7% in April, well above the previous high of 10.8% in 1982. The majority of the unemployed – 18.1 million of 23.1 million – reported to be on temporary layoff. Many of these would shift to permanent status if the downturn becomes more prolonged, or if a second wave of outbreaks leads to another period of extensive lockdowns. 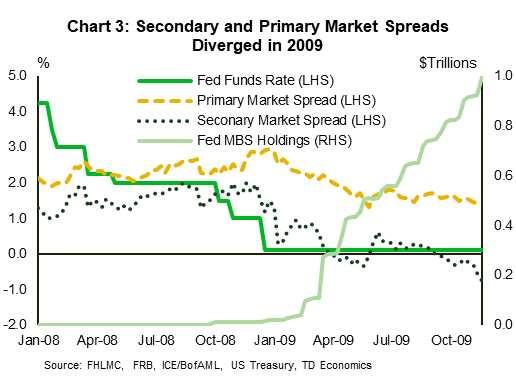 Banks began to tighten lending standards in the first quarter of the year, making it more difficult for households to qualify for first-lien mortgages, as well as other consumer credit instruments such as revolving home equity lines of credit (HELOCs), auto loans, credit card loans, and other consumer loans.1 The Mortgage Bankers Association reported that credit availability in April fell to its lowest level since 2014.2

Some aspects of the current situation are reminiscent of what transpired during the global financial crisis. It’s worth reflecting on those events. The secondary mortgage market froze following the unprecedented collapse in house prices and uncertainty surrounding the pricing of subprime mortgages. Major financial institutions with large subprime exposures came under extreme pressure. Major banks failed (IndyMac in July; Washington Mutual and Lehman Brothers in September). Fannie Mae and Freddie Mac went into government conservatorship. The Housing and Economic Recovery Act was enacted in July to restore the market by enabling the Federal Housing Administration to guarantee new sub-prime mortgages and authorizing states to refinance subprime loans using mortgage revenue bonds.

The Fed responded by cutting the fed funds rate by 400 basis points over the course of 2008. In November 2008, the Fed announced a program to buy $500 billion in MBSs in what was to become the first of three large-scale asset purchase programs (quantitative easing “QE1”).3 The announcement coincided with a sharp drop in secondary market spreads. However, primary market spreads came down much more gradually (Chart 3). This occurred during the deepest recession (at the time) since the great depression. The unemployment rate peaked at 10% in October 2009 and remained above 9% until late 2011. Home prices declined by an unprecedented 30% at the national level.4 Mortgage delinquency rates peaked at just over 9% in early 2010, the highest on record by far. Clearly, mortgage default risk was a major concern at the time.

What more can be done to ease credit conditions in the mortgage market? 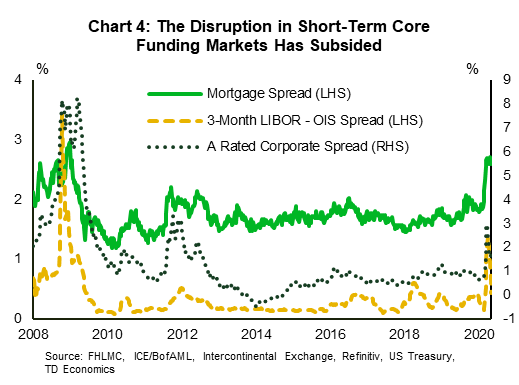 The Fed has undertaken several measures to contain banks’ funding costs. On March 17-18, the Fed introduced liquidity facilities to alleviate stress in core short-term funding markets (commercial paper funding, primary dealer credit, and money market mutual funds). A commonly-used indicator for this is the spread between the London Interbank Offered Rate (LIBOR) and the Overnight Interest Swap (OIS) rate. The “LIBOR-OIS spread” began to widen in early March, reaching a peak of 1.4 percentage points in late March, the highest level since 2009 (Chart 4). The LIBOR-OIS spread has subsequently declined by around 100 basis points, indicating that the liquidity facilities have been effective.

Other measures will help reduce banks’ funding costs further. The Paycheck Protection Program Liquidity Facility (PPPLF) extends credit to financial institutions that originate loans under the Small Business Administration’s Paycheck Protection Program (PPP). The Fed’s (unlimited) large-scale asset purchase program along with the various liquidity facilities will result in a substantial increase in excess reserves and deposits in the banking system. The expansion in deposits will provide banks with a low-cost, stable source of funding. Lowering the cost of funds will partially compensate banks’ for taking on the risk of lending to households in the uncertain times ahead.

Historical experience suggests that mortgage rates will fall back in line with Treasury yields when concerns about default risk dissipate. So far, bankruptcies have been limited; most unemployed workers have not been permanently laid off. The economic outlook hinges on when and how the virus will be contained.  An extended lockdown, or a second wave, would have permanent damage. A prolonged downturn with escalating bankruptcies would put many households in financial distress. This risk is reflected in current mortgage rates.

Mortgage forbearance programs add to the uncertainty. The Coronavirus Aid, Relief, and Economic Security (CARES) Act enacted by Congress on March 27th provides homeowners with a federally-backed mortgage forbearance for up to 180 days, with the right to request an extension for up to another 180 days. Eligible homeowners currently undergoing financial hardship do not have to make principal or interest payments until the fall. The payments are deferred, not forgiven. This will postpone and amplify financial distress for households unable to regain their previous (pre-pandemic) income.