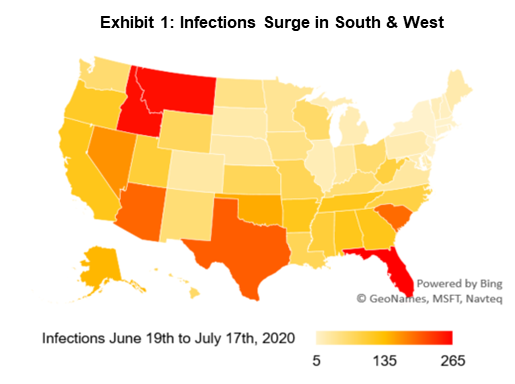 Since publishing out latest Quarterly Economic Forecast on June 17th, the number of coronavirus infections per day in the U.S. has surged. The upturn that started in the sunbelt states has now spread to many areas across the country and threatens to short circuit the economic rebound that got underway in May (Exhibit 1). In fact, it is likely that early re-openings in some areas that were initially not very hard-hit by the virus – and which in turn had helped to boost economic data in May and June – have sowed the seeds of the current surge in infections. In contrast, the areas that were initially the hardest hit and had more stringent and protracted lockdowns, like New York and New Jersey, have not seen an upturn in cases.

At the time of our June forecast, most of the economic data was coming in stronger than expectations, setting the third quarter up for a healthy rebound of just under 30%   annualized following a contraction of around 33% in the second quarter. However, considering the renewed shutdowns, the data is likely to show some loss of momentum in July and into August, and places downside risk to the growth rebound in the third quarter.

High-Frequency Data Point To Loss In Momentum In Certain Areas 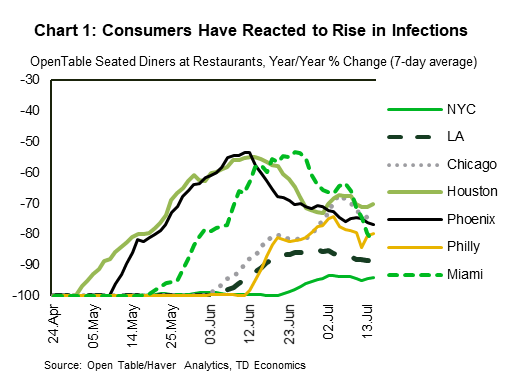 One of the innovations in this fast-moving economic crisis has been a wealth of weekly or even daily economic indicators to track economic activity much faster than the usual lags with monthly data. To name a few, restaurant reservations, TSA traveler checkpoints and mobility trends on phone location data add to the more traditional weekly initial jobless claims as real-time economic metrics.

Some of these high-frequency indicators show that consumer behavior is changing in areas where infections have surged. The OpenTable restaurant reservation data shows pronounced drops in cities with surging cases starting in late June (Chart 1). In contrast, indoor dining had not yet re-opened in New York City, so reservations there remain low.

Given regional variations, the impact is less at the national level, although it is likely to worsen in the weeks ahead. The Dallas Fed’s Mobility Engagement Index1, measures the deviation from normal mobility behaviors induced by COVID-19. It has levelled off and declined very slightly in recent weeks at the national level (Chart 2).

Once again, however, looking at the state level, you see decreased mobility over the period from June 20th to the latest week as of July 11th in states that have had the largest increases in infections from June 19th to July 14th (Chart 3). Once again, hard-hit Florida, Texas and Arizona stand out as states where the improvement in mobility and engagement has started to reverse since late June. 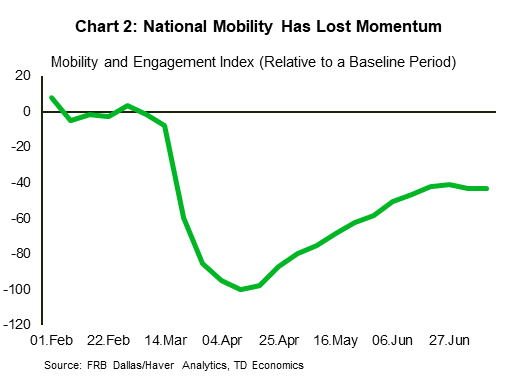 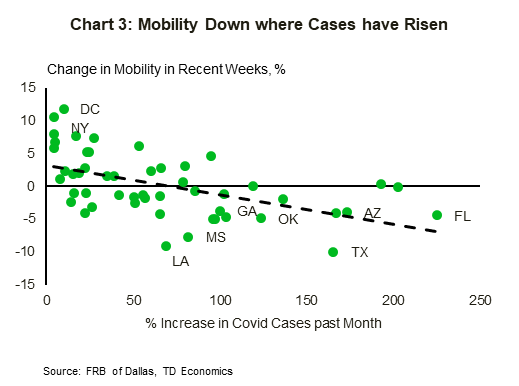 These declines in restaurant reservations, and mobility show that consumers may increasingly be physical distancing and staying home in areas where infections have risen. However, other segments of the economy have continued to improve thus far. The New York Fed’s Weekly Economic Index (WEI) is a broader economic indicator that combines ten daily and weekly indicators of real economic activity and scales them to align with year/year growth in the economy2. The index continues to show improvement in the latest week ending July 11th (Chart 4).

That said, if the index remained at its current level through the entire quarter, it is consistent with GDP growth of about 18% at annual rates for the third quarter. Our recent forecast for a 28.8% rebound requires continued improvement in the weekly index through the quarter. If it worsens or does not improve as much as we had forecast, this presents a downside risk to our near-term view.

Risks To Labor Market Worst In Leisure And Hospitality 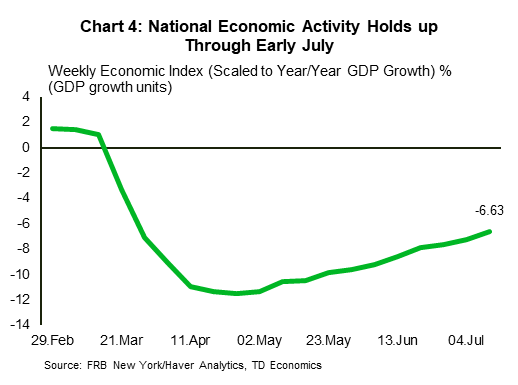 The renewed shutdowns also present a risk to the impressive progress seen in the labor market in May and June. From February to April, employment in the U.S. fell by more than 25 million jobs as measured by the household survey, which is used to calculate the unemployment rate. This took the unemployment rate from a very low 3.5% to 14.7% in April, and down to 11.1% in June, as employment has rebounded by nearly 9 million jobs.

Economists often point out that the headline unemployment rate doesn’t describe “shadow” unemployment of people who have not actively looked for work in the prior four weeks or are unavailable to start a job – the criteria to be counted as unemployed. As was likely common during the pandemic shutdowns, people may not have looked for work because the industry they work in is shuttered (restaurants, movie theaters etc).

This more complete picture is shown in Chart 5, which also highlights the high degree of people on temporary layoff, and subsequent decline from the April peak. As of June, about 60% of unemployed people were on temporary layoff, down from near 78% in April. This is completely unprecedented in prior recessions, and due to the temporary shutdowns of many workplaces, which initially was expected to be relatively short lived.

As workplaces started re-opening in May, the number of people on temporary layoff dropped sharply as employees were called back to work. In fact, it amounts to about 85% of the employment gain over that period. The risk is with the increase in infections, millions of workers still on temporary layoff are delayed in being recalled, or many who were called back in May and June are furloughed once again, weighing on the July employment figures. Our June quarterly forecast assumed about 2.8 million more people head back to work in July , and the unemployment rate falling to 10%. While some areas of the country (primarily the Northeast) are still re-opening parts of their economy, losses in the resurgent states put those job gains at risk.

Looking at employment by state, as large states, California and Texas alone accounted for 1.6 million of the 4.9 million employment gain (in the household survey) in June. If you add in other decent sized states with a significant upturn in infections (Florida, Arizona and South Carolina), they account for 2 million jobs gained in June. With renewed restrictions affecting these regions in particular, it could have a significant impact on the jobs numbers in the coming months.

That said, the latest round of closures has been more targeted, rather than complete stay-at-home orders. Bars and indoor dining have been a common area to be shut down again, and these are where jobs are most at risk. Food services and drinking places shed 6 million positions  from February to April but bounced back quickly in May and June. The industry gained back about 2.9 million positions, or about 48% of the total jobs regained. That is a relatively strong rebound compared to the rest of the services sector, which has regained 36% of jobs lost since February. Renewed shutdowns present a significant downside risk to job gains in the sector in the months ahead. 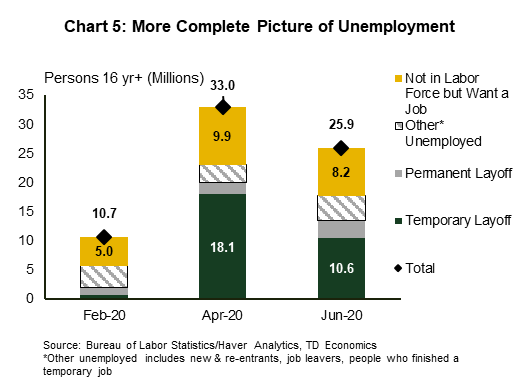 The original high-frequency indicator is weekly initial jobless claims. These have remained elevated in recent weeks despite employment gains in May and June, with over a million Americans still claiming benefits every week. 32 million Americans were collecting unemployment benefits as of June 27th, under the broad range of programs available, including the Pandemic Unemployment Assistance, which broadened eligibility to self-employed and gig workers (Chart 6).

Looking back at Chart 5, the 26 million Americans who are either unemployed or out of the labor force but would like to work, as measured by the monthly household survey in June lines  seems to be quite a bit below these very high claim figures. The difference, in part, may be that people who are still employed but have seen their hours cut back significantly can still collect a reduced level of unemployment benefits.  Moreover, individuals that are in a work sharing can still qualify for benefits in some U.S. states (as at the end of June, about 343k people fell into this camp).  Typically, the number of people under this broader measure of labor underutilization is much higher than the level of people collecting unemployment benefits. The fact that it is currently the reverse speaks to the unique nature of the current shock and the generosity of the expanded unemployment benefits rolled out as part of the CARES Act (see report). 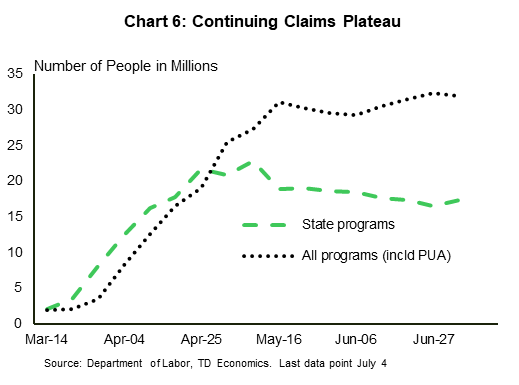 The sky-high number of unemployment benefit recipients, and the risk that this number will get worse in the coming weeks given the loss of momentum in many areas of the economy, underscores the necessity for continued assistance from Washington. The $600 weekly federal top up – Pandemic Unemployment Compensation – ends on July 31st. Many Republicans are not in favor of having many people with lower-paid jobs collecting more money than they would have made working. But this generosity has helped keep retail spending very strong and prevented a larger wave of financial hardship. Hopefully a compromise can be reached in Congress that customizes the benefit a bit more so that people can still earn more than the state maximums, which are very low in some states (Florida, for example tops out at $275 per week), but not the one-size-fits-all approach that the PUC took in the interest of simplicity and speed in the face of a rapidly deteriorating crisis back in March.

Recent high frequency data indicates at least a loss of momentum at the national level in early July and in many regions a retrenchment.  It is likely that the national data will fall back in the coming weeks given the virus has yet to be contained in many areas of the country. How long a greater degree of caution continues depends on the spread of the virus, but it presents a downside risk to our third quarter growth forecast released last month. The outcome is not set in stone, however. Further assistance from Washington should be forthcoming in the next few weeks. Ideally it would include some kind of top up to state unemployment benefits, in addition to assistance for states and localities broadly as outline in our earlier report, and potentially an extension with further tweaks to the PPP program. These would help to cushion the now worsening blow to many areas of the economy that will continue until the pandemic is contained.