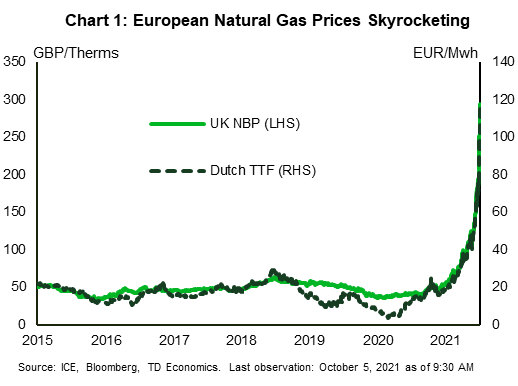 Add global natural gas shortages to the long list of supply chain disruptions impeding the global economic recovery and sparking inflationary concerns. The strong uptrend in natural gas prices has become more amplified in recent weeks, with the Northern Hemisphere faced with impending shortages as it approaches the winter heating season. Indeed, European benchmark natural gas prices are up more than 500% this year – and have risen more by around 100% in the past month alone (Chart 1). In Asia, spot LNG spot prices have also surged. And more recently, North American natural gas prices have joined the party, with Henry Hub futures reaching their highest levels since 2014 before paring some of their gains.

Spillovers are being felt across the energy complex. Despite a bearish U.S. inventory report last week, WTI oil prices recently shot above the US$75 mark on speculation that oil to gas switching would further tighten crude markets. The rally was even more noticeable following OPEC+'s announcement that the group will stay the course with its planned production increases of 400K bpd every month. Elsewhere, other substitutes (coal) and commodities relying on natural gas feedstock and heavy electricity usage (fertilizers, aluminum) are witnessing output reductions and surging prices.

The Economic Impacts Are Already Being Felt

The winter heating season still hasn't started, but this turn of events is already lifting inflation and adding downside risks to economic growth across Europe and Asia. Case in point, China's official manufacturing PMI slid into contractionary territory last week (to 49.6 from 50.1). In China, power rationing has been implemented across several provinces for industrial and residential users. Meanwhile in Europe, several small UK utility providers, caught off guard by the price increases, have failed. Power prices are rising across several countries, adding further upward pressure to already-high consumer price inflation. Indeed, early estimates suggest that Eurozone inflation increased to 3.4% (y/y) in September, the highest since 2008. Some European governments are already intervening to cap electricity rates and/or provide financial support to offset rising costs to consumers. There are mounting concerns that should this tightness continue, it could also impact more vulnerable emerging market economies. Finally, the impacts on factory output in China and Europe are exacerbating concerns around already-constrained global supply chains. 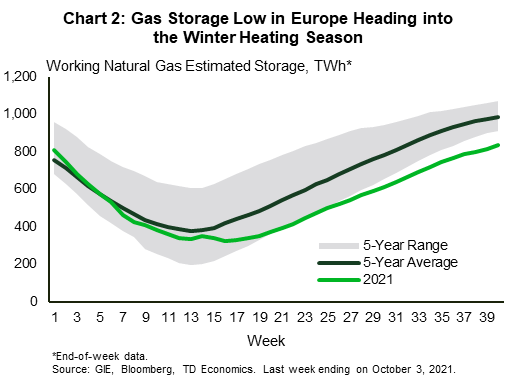 Shortages and supply chain disruptions have become more commonplace since the onset of the pandemic. In the case of natural gas and power, a confluence of drivers – almost too many to list – have compounded at the wrong time to tighten markets. Like other areas of the global economy, demand appetite in some regions has rebounded strongly and faster than expected. On the supply side, the summer injection season in Europe is ending on a disappointing note, leaving inventories notably low (Chart 2). Flows from Norway and Russia to Europe dropped through the summer. Idiosyncratic events, including a fire at a UK-France electricity connector may have worsened the situation.

Unfortunately, constraints on natural gas procurement are widespread globally, resulting in spiking LNG prices. Global LNG markets have been witnessing elevated demand and competition from the more longstanding buyers. At the same time, China has been cementing its position as an increasingly important player in the market while it tries to wean itself off coal-generated electricity. Brazil also contributed to the rise in global LNG demand, with drought conditions limiting its ability to produce hydroelectric power. 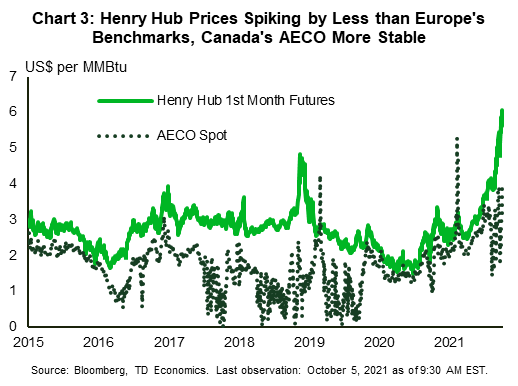 Against this tightening global backdrop, North American economies have started to feel the pinch. The recent spike in Henry Hub benchmark prices is a notable departure following years of lackluster performance. However, while some ripple effects are being felt through disrupted global supply chains and the small exposure of North American markets to LNG exports, North American economies are partly shielded by still-plentiful domestic natural gas production capacity. In Canada, AECO prices have risen this year, but by less than Henry Hub futures (Chart 3), with inventories closer to the five-year average, lesser exposure to the global LNG market, and lesser weather-driven production disruptions. Inventories in the U.S. are running below the five-year average. Recent storms impacted production in the Gulf of Mexico.

But production is gradually recovering. LNG export capacity in the U.S. (around 11% of dry gas production) is limited by infrastructure, capping the ability of producers to direct more output towards the currently more lucrative external markets for the time being, and thereby partly cushioning against the spillover effects.

"The Cure to High Prices is High Prices" Still Applies, but it Could Take Time

With global markets tight, the near-term outlook for natural gas prices will be at the mercy of weather. And all told, some volatility into Q4 would not be entirely surprising for the entire energy complex globally.

Europe is more susceptible to continued elevated prices through the autumn and winter given its notably low inventories and the lack of immediate alternative supplies. And, competition from other buyers will likely keep prices elevated. Indeed, China has recently indicated it will secure fuel sources regardless of the cost. Some areas of potential respite to Europe include an increase in Norwegian and Russian gas flows. Milder weather in the fall/winter would also be supportive.

In North America, weather will also be critical in determining the trajectory of prices, and colder-than-expected spells could still result in near-term volatility given the lower than average inventory. But stripping away short-term movements, domestic production capacity is still ample and should be able to respond to price spikes. Indeed, Henry Hub natural gas futures are not signaling any lasting significant shortages, with prices projected to moderate from current levels to settle in the US$3-US$4.5 per MMBtu range after next winter (near the higher end of this range in 2022). In its latest Short-Term Energy Outlook, the Energy Information Administration (EIA) has forecasted a 3.2 billion cubic feet per day increase in dry gas production next year, with domestic consumption projected to remain flat, partly due to higher prices.

The case for a more bullish oil price outlook in the fourth quarter has turned more compelling, especially as some OPEC+ members face difficulty in quickly ramping up production. In addition, OPEC+ indicated early this week that the group will stay the course with respect to its quota tapering plan, adding 400K bpd of crude every month. Amid speculation that the natural gas shortage is prompting oil-to-gas switching for power generation, this may result in further market tightness throughout the fourth quarter. Prices are still likely to receive some reprieve as U.S. production recovers from the late-summer hurricane impacts. Over the medium-term, with plentiful OPEC+ spare capacity and rebounding U.S. production, sustained rallies beyond current levels appear unlikely.