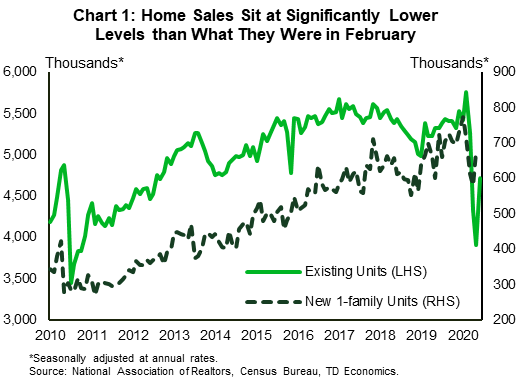 While most areas of the U.S. economy are undergoing a gradual improvement in activity, the housing market, specifically home sales, is exhibiting signs of a V-shaped recovery. Pent-up demand — particularly from millennials who have delayed homeownership – and falling mortgage rates have supported housing demand even as the health crisis has had devastating impacts on the labor market. All signs point to a strong rebound in third-quarter home sales – both new and existing.

Beyond the near-term, challenges still remain for the housing market. The most notable risk surrounds the job market and the current rise in infection rates. Absent a continued rebound in jobs, which remain 10% below pre-crisis levels, and income, which has to-date been highly dependent on increased government transfers, we could be poised for a renewed setback in home sales and prices later this year.

Housing Activity Weakened Due to Pandemic

Leading up to the COVID-19 outbreak, the housing market was gaining momentum. Buyers were flocking to purchase homes and builders were responding. Total home sales — existing and new homes — rose by 1.1% in 2019, after declining by 3.2% in 2018.1 In February, just ahead of state mandated lockdowns, sales reached a post-2008 financial crisis peak of 6.5 million (annualized) units. Construction also picked up. Housing starts rose to a post-crisis high of 1.6 million in January 2020, up 27% from a year-earlier.

Housing market activity appeared set to continue to strengthen through 2020. The labor market was adding jobs, and with unemployment near a record-low, income growth was accelerating, and mortgage rates were sitting at historically low levels. The ingredients were there for solid housing sector growth this year.

Unfortunately, COVID-19 upended these trends. With the virus quickly spreading in March and April, states put their economies under lockdown. This dealt a heavy blow to the housing market as buyers retreated. Sales of existing homes plummeted to levels not seen since 2010, while new home sales tumbled by around 20% from February to April (Chart 1). New home sales re-gained 70% of their losses in May, while existing home sales, which make up around 90% of the home sale market, saw a rebound of nearly 21% in June, but still sits 18% below where it was in February.

State lockdowns had a considerable impact on housing construction as well. Housing starts fell by over 40% from February to April (Chart 2). However, as economies reopened, starts have picked up and now sit 24% below February levels. 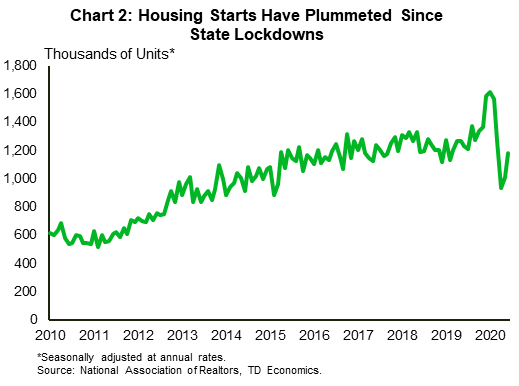 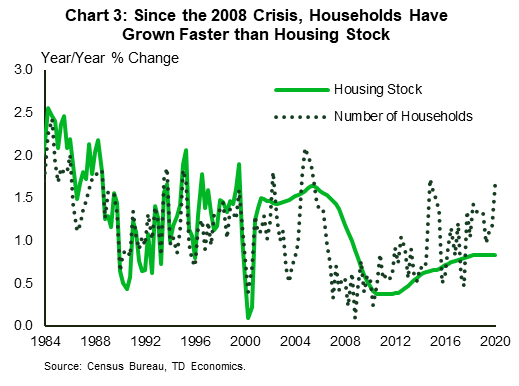 The drop in residential construction exacerbated a long-standing issue in the housing market — insufficient supply. Indeed, since the 2008 financial crisis, households have formed at a faster pace than growth in the stock of housing (Chart 3). This was partly due to an overbuild in housing prior to the crisis, evidenced in a rising vacancy rate, which normalized in the following years. However, the homeowner vacancy rate now sits at a 41-year low, suggesting there are deeper problems with housing supply. In fact, in the first quarter of 2020, the housing stock was 2.6 million units lower than what it should have been to accommodate the 124 million households in America.2,3 High home building costs, zoning restrictions, and lack of skilled workers are some of the reasons housing supply has not kept up with demand.

With lockdowns bringing residential construction to a halt in many states and potential sellers reacting to deteriorating economic conditions by taking their homes off the market, the inventory of homes available for sale declined by 8% from February to May. This drop in supply pushed home prices higher. The CoreLogic national home price index rose from an average of 3.6% y/y growth in 2019 to 4.8% in May 2020.

Millennials Behind The Resilience In Homeownership Demand

While the COVID-19 pandemic has weighed on housing supply, demand has remained resilient. This is most clearly seen in the surge of applications for new mortgages, which reached unprecedented heights in June and the early parts of July (Chart 4). After being shut out due to lockdowns, buyers have been flocking to the housing market, especially millennials.4 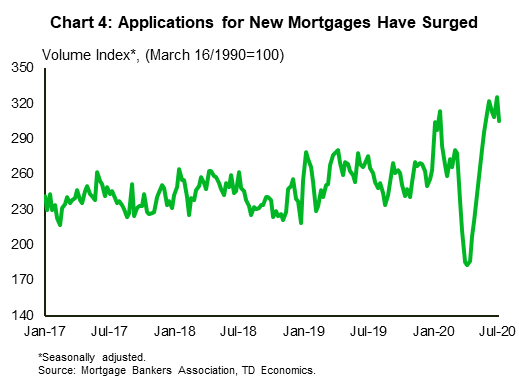 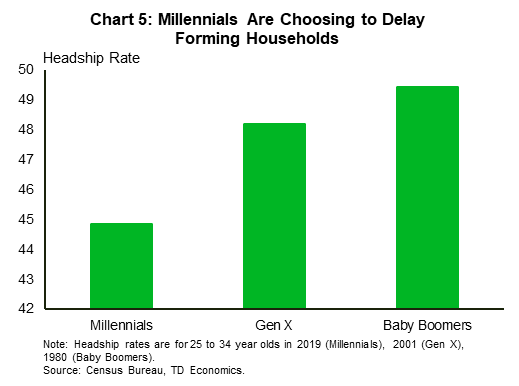 Indeed, millennials are the main source of  pent-up demand for housing in the United States.5 This generation has, for several years, put off buying homes and forming households of their own, choosing to livewith parents or rent with roommates due mainly to elevated home prices.6 As a result, compared to older generations, millennials have a significantly lower headship ra te – defined as the number of household heads per population (Chart 5). However, in recent years, we have started to see the headship rate for millennials improve (Chart 6). The indicator flattened in 2018 and posted an increase in 2019, suggesting that more millennials are finally forming their own households.

Not only were millennials branching off on their own, they also started buying homes. The homeownership rate for 25 to 34 year-olds rose from 39.2% in 2017 to 40.7% in 2019, the strongest increase among all age cohorts.7 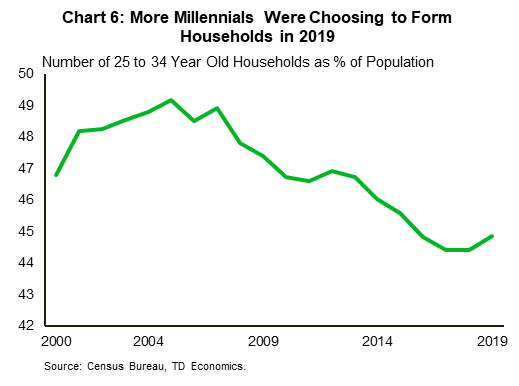 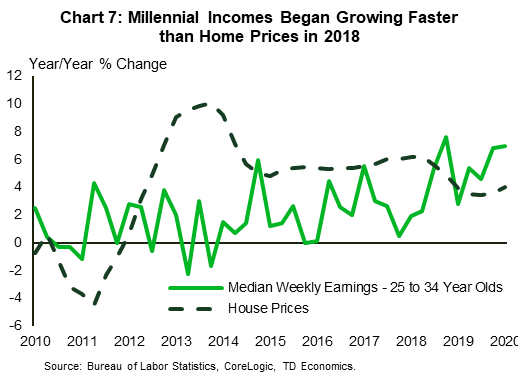 The key reason for this shift in millennial preferences was likely increasing affordability. After falling behind home price growth for many years, incomes finally rose faster than home prices in 2018 (Chart 7). With homes more affordable, more millennials opted for homeownership over renting.

This momentum carried into 2020 when the pandemic struck. Importantly, as evidenced by the heroic rebound in applications for new mortgages, demand from the large millennial generation has barely missed a beat. Although around 10% of 25 to 34-year-olds have lost their job since February, a significant number of the 90% that remained employed appear to have dipped their toes into the housing market. 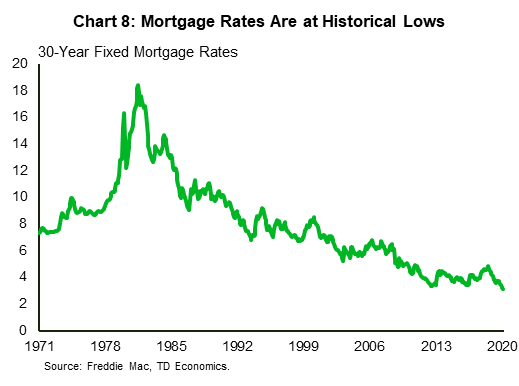 Another important reason why homeownership demand has been resilient so far through the pandemic is historically low interest rates (Chart 8). For the first time in fifty-years, the thirty-year mortgage rate fell below 3% in mid-July. With mortgage rates this low, homebuyers would save nearly $300 a month on an average priced home compared to late-2018, when rates were sitting near the 5% mark. This has kept buyers engaged with the housing market despite the downturn in other parts of the economy.

Sales Pickup Likely To Continue But Challenges On The Road Ahead

Supported by low mortgage rates and demand from millennials, home sales appear set to pick up further in the near-term. However, for sales to continue to be strong beyond the next quarter, economic and health conditions will have to see further improvement.

The boost from falling mortgage rates, on the other hand, is likely to dissipate somewhat. The Federal Reserve has indicated it will keep the target range for the federal funds rate at rock-bottom levels through 2022 and has committed to continue the quantitative easing program at least until the economy is on a solid recovery path. This will continue to hold down mortgage rates in the years ahead. Still, with the 30-year fixed rate mortgage hovering near historic lows, further declines appear unlikely.

As the initial boost to activity from lower rates diminishes, the future path of housing sales will increasingly depend on labor market conditions. Prospective buyers must be employed to have the income and confidence to enter the housing market. As of now, higher income individuals, who are able to purchase homes, have not been as impacted by the economic downturn. Indeed, 85% percent of the jobs lost since February have been concentrated in sectors that pay below average wages. However, if the labor market recovery falters and job losses mount in higher paying sectors, potential home buyers will move to the sidelines. 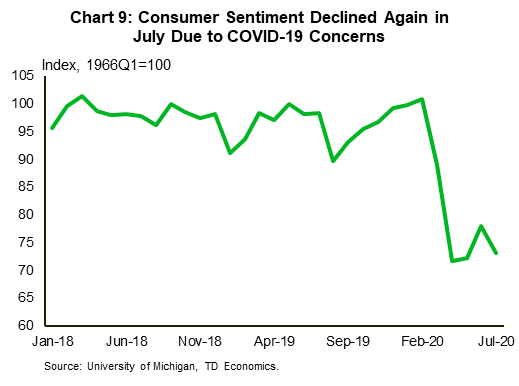 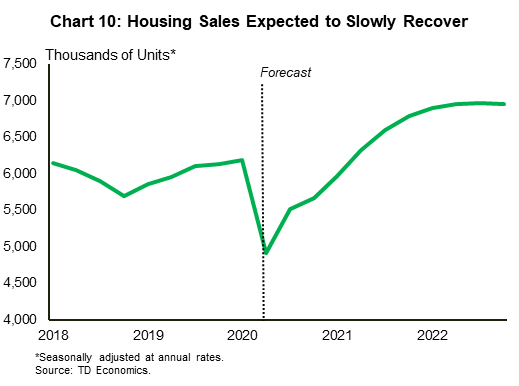 A robust labor market recovery will not be possible without successfully containing COVID-19. Positive health outcomes will instill confidence in businesses and consumers to invest and spend, thereby boosting employment growth. Unfortunately, this is not the direction the U.S. appears to be headed in. Coronavirus cases have surged recently — primarily in southern states — and, as a result, consumer sentiment declined back to April levels in July (Chart 9). Some businesses have also announced they will once again close newly reopened stores, or delay opening closed ones. Moreover, some state and local government authorities in California, Texas and other affected regions have been pausing or rolling back reopening plans. This could induce further job losses and income declines, weighing on housing sales activity.

Assuming that America ultimately manages to bring the virus under control, in part through improved systems of tracking/tracing as well as treatments, we should see the labor market continue to improve in the fourth quarter, but at a slower pace compared to the third. As a result, we expect the recovery in housing sales to also slow following the initial strong burst of growth in the third quarter (Chart 10).

It is possible, though, that if labor market conditions remain favorable in higher paying sectors, buyers will continue to frequent the housing market. However, this activity will likely be limited by supply issues as sellers think twice about listing their homes during the pandemic.

In terms of prices, we expect they will remain elevated in the third quarter given low housing inventory. However, as the labor market recovery slows in the fourth quarter, price growth should also weaken. Still, supply constraints will put a floor on prices over the near and medium term.

The housing market is one of the brightest spots in the U.S. economy at the moment. Demand has remained resilient despite the devastating impact of the coronavirus. Behind this strength are millennials who, after many years of sitting on the sidelines, are making the leap into homeownership due to rising affordability. However, this momentum appears likely to slow, in part as the initial thrust from falling mortgage rates dissipates, but also as the resurgence of COVID-19 weighs on the labor market recovery. While ongoing improvement appears likely, much like the overall economy, it will likely be well into 2021 before activity regains its pre-crisis level.