Is the U.S. Business Sector Vulnerable to a Hard Landing?

The U.S. business sector debt burden from a historical perspective 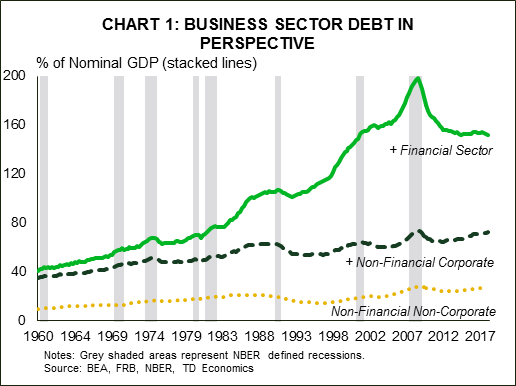 Much of the increase over the period 1980 to 2008 occurred in the financial sector. Subsequent deleveraging in the sector followed the implementation of regulatory reforms requiring more stringent capital adequacy levels and reduced dependence on wholesale financing. The Tier 1 capital ratio for the U.S. banking system is currently at 13.5% (2018Q2), well above the 10.1% level established in 2007Q4, while the loan-deposit ratio decreased from 89.6% to 71.2% (in 2018Q1).1 The debt burden in the financial sector is currently well below the level at the onset of the global financial crisis and below the level at the onset of the 2001 recession. By contrast, the debt burden in the non-financial sector is currently above levels at the onset of all previous recessions.

The above analysis gauges the debt burden in the non-financial sector with reference to GDP at the aggregate level. Value-added output at the sectoral level (sectoral GDP) provides a meaningful measure of the ability of firms to meet their debt service payments. In the non-financial sector, value-added output currently accounts for about two-thirds of aggregate GDP, down from over 70% in the early 1960s. On this basis, the debt burden of the non-financial sector is currently above levels at the onset of the global financial crisis and previous downturns (Appendix Table 2). Unincorporated businesses (sole proprietorships and limited partnerships) account for most of the increase (Chart 2). 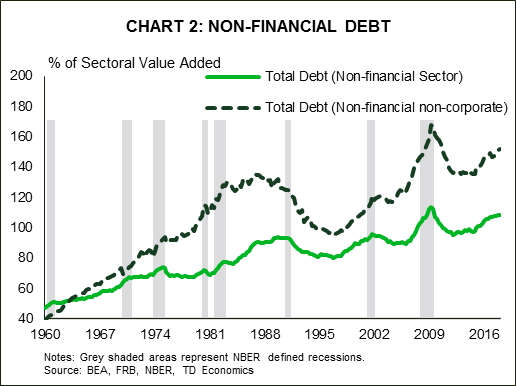 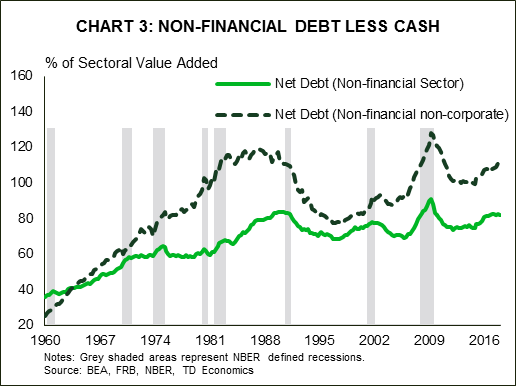 Debt levels are less onerous, however, when one takes into account the high amount of cash that businesses are currently holding on their balance sheets.2 Netting off cash holdings brings the corporate debt burden down slightly below levels at the onset of the past three recessions (Appendix Table 3). Taking into account cash holdings of unincorporated businesses reduces the debt burden to the level observed at the onset of the global financial crisis but above levels at the onset of previous recessions (Chart 3).

There is an important caveat here – much of the cash is believed to be held by relatively few businesses.3 Cash holdings at the aggregate level therefore overstate the reserves available to most corporations in the event of a major downturn in the credit cycle. 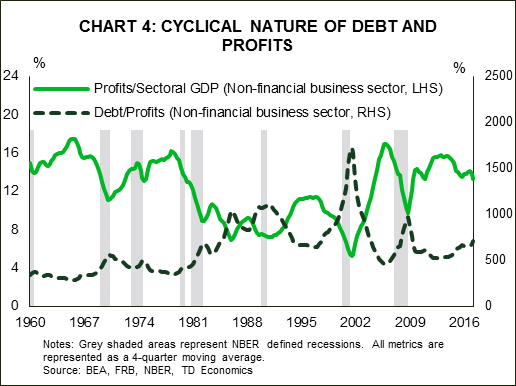 Corporate profits are currently elevated relative to sectoral GDP, averaging 14.3% since the economic recovery began. This is higher than the level seen at the onset of the 2001, 1990, and 1981 recessions, but below the average in the year preceding the global financial crisis (15.2%) (Chart 4). Meanwhile, corporate debt has grown in line with profitability. The corporate debt-to-profit ratio is currently just above the level at the onset of the global financial crisis and well below levels prior to the previous two recessions.

The debt burden appears manageable under current economic and financial conditions. However, it’s hard not to notice the cyclical regularities in corporate debt, profits, and output. Recessions have more often than not been preceded by a downturn in corporate profits relative to sectoral GDP. The corporate profit-to-GDP ratio has tended to peak prior to the onset of recessions. This ratio peaked at 16.1% back in 2014.

How will firms’ interest expenses evolve in a rising rate environment? 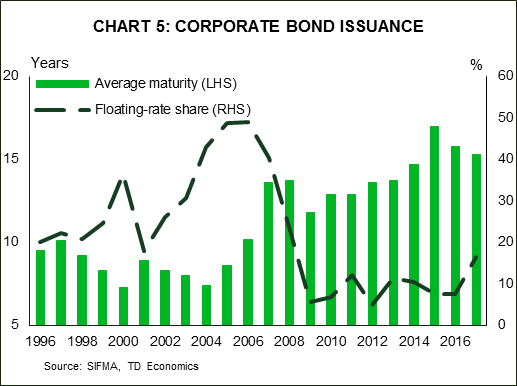 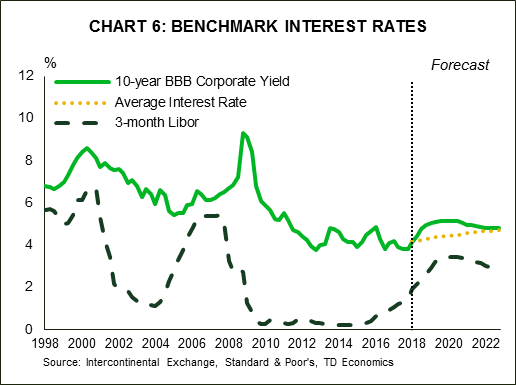 To illustrate, consider a corporation with interest rate expenses equal to 4.2% of their outstanding bonds (equal to the average effective interest rate on the 10-year BBB corporate bond index over the past six years). Assume that the corporation’s debt level continues to grow in line with earnings (3.8% on average) and the maturity structure of its bonds are the same as that for the total investment-grade corporate debt outstanding. The cost of bond financing is set to the 10-year BBB corporate yield, which we project to increase to a peak of 5.2% by the end of 2019. Debt accumulation accounting calculations indicate that the average effective interest rate on the firm’s bonds would increase gradually to 4.7% over the five-year projection horizon (Chart 6).

Interest rates are projected to peak in 2020. Analysis by Standard and Poor’s (2018) of S&P-rated U.S. corporate debt indicates that as of December 2017 approximately 30% of S&P-rated non-financial corporate debt was scheduled to mature over the three-year period 2018-2020. Speculative grade issuers, in particular, have taken advantage of favorable financing conditions to extend the maturity structure of their debt - only about 21% of their debt was scheduled to mature over the period 2018-2022, compared to 35% for investment grade issuers.

Unincorporated businesses are vulnerable to both interest rate and refinancing risk 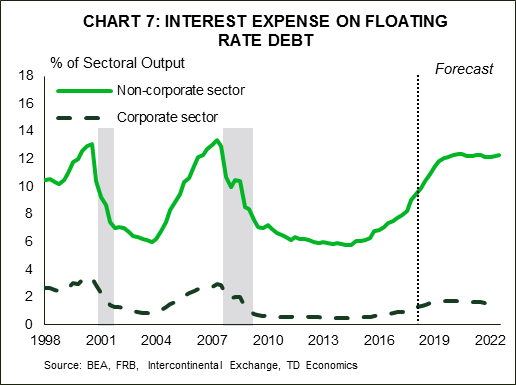 Debt of sole proprietors and limited partnerships largely consists of leveraged loans and revolving credit facilities, which generally have shorter maturities than corporate bonds and are predominantly on floating rate terms.5 Interest expenses on those debt instruments are expected to rise significantly over the next two years.

To illustrate, consider the following scenario. If the entire amount of non-corporate debt was on floating rate terms, a spread of 410 basis points over LIBOR would be required to reconcile interest paid in 2016 (the most recent period available from the integrated macroeconomic accounts) with debt outstanding at that time. Maintaining that spread above the projected LIBOR rate as shown in Chart 6 would increase interest expenses from 9.0% of GDP in the sector to over 12% by the end of 2019, which is close to the levels observed at the onset of the global financial crisis and the 2001 recession (Chart 7).

The projected increase in interest expenses on floating-rate debt is much more subdued in the corporate sector. This reflects two factors. The amount of debt on floating rate terms is much lower equating to approximately 30% of debt outstanding.6 And the spread needed to reconcile interest paid in 2016 with debt outstanding was much lower (198 basis points). In this scenario, interest expenses in the corporate sector would increase from 1.2% of sectoral GDP to 1.7%, well below the levels observed at the onset of both the global financial crisis and the 2001 recession (equaled 2.9% in 2001Q1 and 2007Q4).

The U.S. Federal Reserve Board faces a difficult challenge at the current phase of the business cycle with the unemployment rate at a near-record low and core PCE inflation expected to rise above the target level in the coming year. Similar episodes have, more often than not, ended with sharp increases in interest rates, along with a deterioration in profitability.

Non-financial corporations reliance on long-term, fixed-rate debt mitigates their exposure to such an outcome. However, the ability of unincorporated businesses to manage their high debt burden could deteriorate sharply in such a scenario given their reliance on short-term floating rate debt.