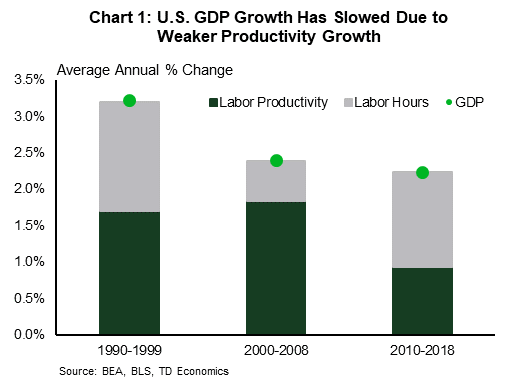 Productivity growth in the U.S. has been on a steady decline for the past two decades. Growth in output per worker fell from 2.1% in the 1990s to 1.1% in the 2010 to 2018 period. This decline has been the main reason for the relatively weak pace of economic growth in the decade-long expansion following the Great Recession (Chart 1).

Looking ahead, we don’t expect a major revival in manufacturing productivity. The forces behind the weakness – increased industry concentration, slowing technological change, and global offshoring – appear unlikely to reverse any time soon, suggesting a continuation of the recently observed trend.

In the early 2000s, trend productivity grew steadily at around 2% on an annual basis (Chart 2).1 Productivity growth in service-industries was solid, in line with the overall average. But the real star of the show was goods-producing industries, with productivity gains averaging around 4%, nearly double that of services. 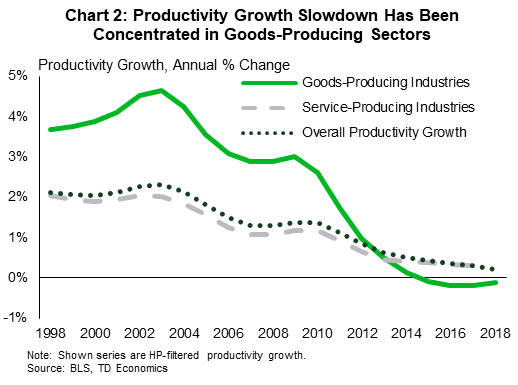 The Decline in Manufacturing Productivity

The manufacturing industry was once the beacon of productivity in the U.S., generating gains in the range of 4% to 8% in the late 1990s through to the early 2000s (Chart 4). But, beginning in 2004, productivity growth began a secular downturn that continued through to 2015. The magnitude of the decline is astonishing: productivity growth fell from a peak of 7.6% in 2003 to -0.1% in 2015, a drop of eight percentage points.  Since 2015, productivity growth has improved modestly, but it continues to remain at very low rates. 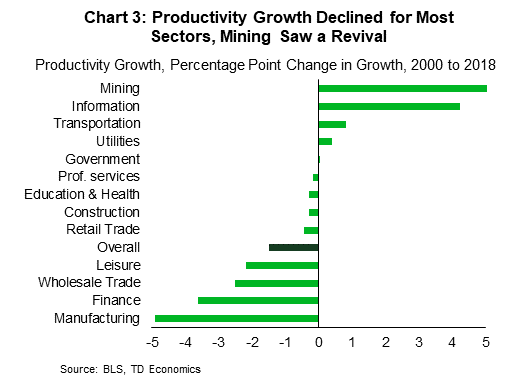 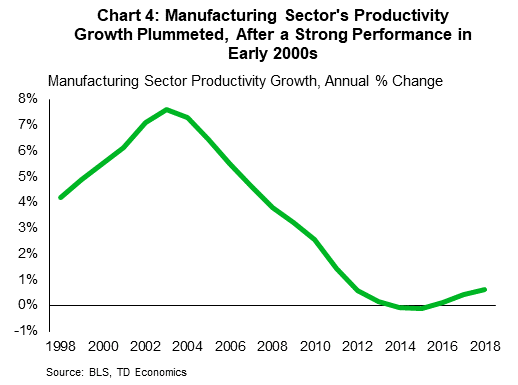 The other consequence of advances in information technology was a dramatic reduction in the cost of communication. This, along with China’s entry into the World Trade Organization in 2001, allowed global goods production to be “unbundled” across national borders. As a result, the manufacturing supply chain has become more fragmented across the globe, with an increasing amount of inputs sourced from places outside the U.S. – a practice commonly known as offshoring. For example, to produce its vehicles, General Motors is involved in 133 manufacturing operations spanning 16 countries around the world.6

Offshoring lowers costs for businesses and provides a competitive advantage, but it may also reduce innovative capacity within the U.S. Workers less exposed to the various aspects of the production process are less likely to identify areas ripe for efficiency gains, improve existing technologies, and find new applications for these technologies.7 Indeed, this has already occurred in some manufacturing subsectors that produce goods such as batteries and electronics and semiconductors. As businesses formerly domesticated in the U.S. shifted production of these goods to other countries, the know-how went along with it. All in all, while the research so far is inconclusive, evidence is mounting that global offshoring may have weakened productivity growth in the U.S. manufacturing sector.

Another potential reason for the productivity growth slowdown is increasing industry concentration. That is, business competition within industries is on the decline. Competition encourages creative destruction. Faced with competition, businesses that are continually innovating and lowering costs gain or maintain market share, while those that don’t usually fail.8 Since the 1980s, competition in the manufacturing industry has been on the decline as witnessed by weakening business start-up and failure rates (Chart 5). Recent research suggests slower knowledge diffusion is an important reason for this decline. Firms are increasingly using patents to limit the transfer of knowledge within industries, thus raising barriers to entry and giving an advantage to incumbent firms.9 This practice grew in the 2000s likely further weakening competition, therefore constraining productivity growth.

Looking ahead, over the next few years, the forces weighing on manufacturing productivity will likely remain in place. The fall in communication costs made feasible by the internet and digital communication will not be reversed. And, while the U.S.-China trade war has weighed on global supply chains, so far it has done little to shorten them. Instead, investment in the manufacturing sector has been held back by elevated uncertainty from trade negotiations, putting further downward pressure on productivity growth. 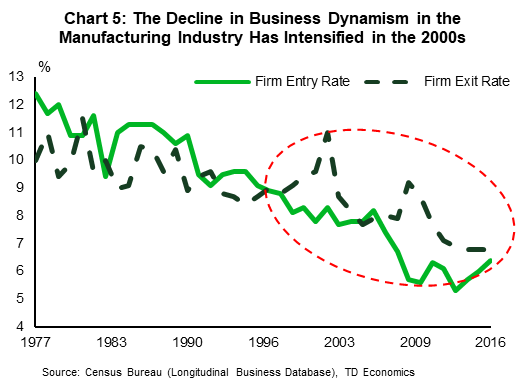 By the same token, the decrease in competitive pressures and accompanying drop in firm start-ups and failures is a slow-moving train. Changes in legislation may help, but will face resistance and do not appear to be forthcoming.

Over the longer term, however, we could see a pickup in manufacturing productivity, albeit not to rates observed in the 1990s. Technological progress is advancing in areas such as automation, 3D printing and artificial intelligence, and it could just be a matter of time before they are efficiently adopted in manufacturing processes. These may help on multiple fronts: they all reduce the labor cost advantage of emerging markets and could help to bring more production back to the U.S. And, assuming these general-purpose technologies are widely dispersed across firms, they may also help to increase competitive pressures and drive further innovation.

Another factor that could potentially support a pickup in manufacturing productivity over the long haul is the 2017 U.S. Tax Cuts and Jobs Act, which substantially lowered the marginal effective tax rate on investment in manufacturing as well as other key industries.

This remains an area to watch. While so far there is little evidence of technological advances showing up in the productivity numbers, sudden jumps have been known to occur. This is perhaps the best hope for a major pickup in overall U.S. productivity growth.