Bringing the Heat to the American Labor Market 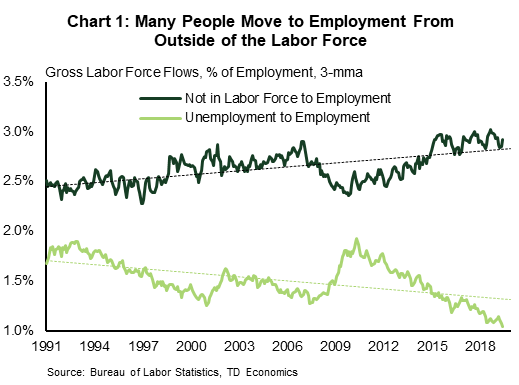 In his recent testimony to Congress, Federal Reserve Chair Powell struck back at the notion that low interest rates would cause the labor market to overheat, saying “to call something hot, you need to see some heat.” As evidence of the tepid state of the labor market he pointed to wage growth that “barely covers productivity” and that is not “high enough…to put any upward pressure on inflation.”1

On the surface at least, job market statistics look good. At 3.7%, the unemployment rate is well below levels experienced prior to the last recession. There are now more job openings than there are officially unemployed people to fill them, a change from most of the recovery.

But, as increasingly recognized by Fed officials, the unemployment rate may not be capturing still-important sources of labor market slack. Indeed, many people who enter employment are not officially unemployed at all, but exist outside of the official labor market (meaning they weren’t previously “actively” looking for work) (Chart 1).
An alternative metric to the unemployment rate is the percent of core working age people (25 to 54) who are employed. As an employment rate, it moves in the opposite direction of the unemployment rate. But, it has the advantage of including everyone in the population, so it is not dependent on whether people are actively looking for work. The downside is that it includes people who may be permanently out of the workforce. It is, therefore, difficult to disentangle structural changes in this ratio from cyclical ones.

Still, there is a good case for using a broader measure of labor market slack. Recent research suggests that the employment-to-population ratio is less prone to statistical biases that may result in an under reporting of unemployment.2 What is more, the core employment rate appears to have a closer relationship with wage growth. Using this metric, the puzzling lack of heat in wage growth is less of a mystery – the employment-to-population ratio is still below its pre-recession level and well below its peak hit in 2000.

So, what would it take to get back to these halcyon days of yore? First and foremost, the recent uptrend in labor force participation among core-aged people would have to continue. Even after a decade-long recovery there are many people who, while not actively searching, want a job and have searched for one in the past year. Just as important it will take time and a continued economic expansion. Assuming the trend that we have seen over the past three years is maintained, the employment-to-population ratio would still not hit the 2000 mark until 2022.

More than one measure of “wage” growth 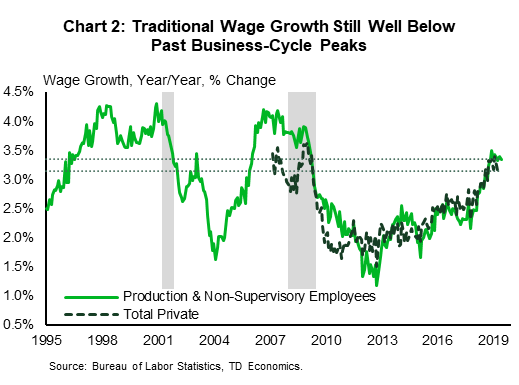 The wage growth metric that is most often cited in the business press is hourly earnings of all employees on private non-farm payrolls. According to this measure, wages were up 3.1% from year-ago levels in June, down from a peak of 3.4% in February of this year. Unfortunately, this data only goes back to 2007, so comparisons to past business cycles are not possible.

A similar series, which measures hourly earnings for non-supervisory workers and goes back to 1964, shows a similar trend, but with slightly faster growth at 3.4%. It too is still well below the peak of over 4% seen in past economic cycles (Chart 2).

Both wage metrics, however, are far from perfect. They do not account for changes in compensation or other benefits. A wage metric that does is the compensation index within the quarterly employment cost index (ECI) data. This data is more volatile. While it shows some improvement, like average hourly earnings, it is still running well below past business cycle peaks. In the second quarter of this year, overall compensation was up 2.8% year-on-year, well below the most recent peak of 3.5% in 2007 and even further below the 4.5% peak hit in 2000 (Chart 3). 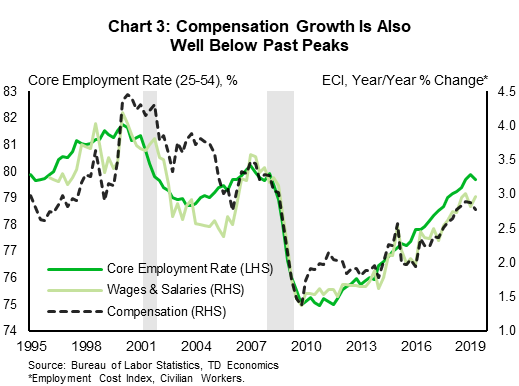 Yet another measure that has some appeal is the Atlanta Fed’s wage tracker. It captures “the median percent change in the hourly wage of individuals observed 12 months apart.”3 Because it measures the wage growth of the same people, it excludes changes in wage growth that are due to changes in the composition of the employed. Research shows these compositional effects are important and can distort the signal coming from the traditional wage data.4

Looking at either the ECI or the Atlanta Wage tracker, two obvious facts emerge. One, wage growth has been making steady progress. Two, there is still a long way to go before hitting the highs seen in past business cycles.

One reason that wage growth may not have reached past highs is that the labor market still has enough slack to keep downward pressure on wages. Just looking at the unemployment rate, this is not all that apparent. The current rate of 3.7% is a fair bit lower than the minimum level hit in 2007 of 4.4%. Indeed, the last time the unemployment rate was comparable to its level today was in 2000 when it hit 3.8%.

More inclusive measures, however, tell a different story. Economists at the Kansas City Fed estimate a Labor Market Conditions Index that integrates a wide array of labor market indicators. It shows a level of activity that is close to its 2007 level, but still well under its level in 2000 (Chart 4). Similarly, the “underemployment rate” that captures the share of workers involuntarily employed part time (people who would prefer full time work) is still elevated relative to its nadir at the turn of the century.

Just as signficant, the number of people employed relative to the overall population was much higher in those years compared to today. Part of the reason is that the population in the late 1990s was younger than it is today with more people in their prime working years and fewer in retirement. 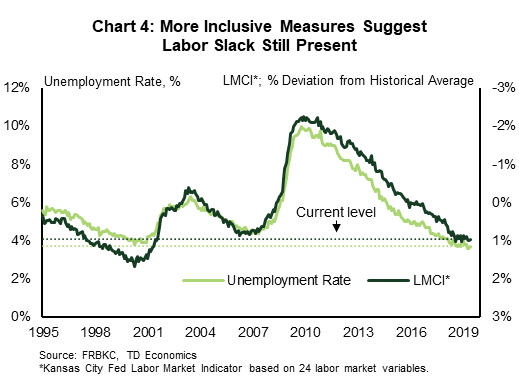 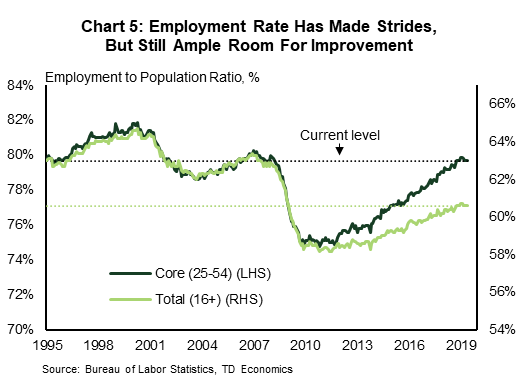 Limiting the focus to people from 25 to 54, the aging impact is much less significant. Most people in this age group are out of school and not approaching retirement. The employment rate for people between the ages of 25 to 54 is often called the core or prime employment rate. This ratio is still six-tenths of a percentage point below the most-recent peak of 80.3% hit in January 2007. The absolute peak in the core employment rate was reached much earlier in 2000 at 81.9% – more than two percentage points above the current level. (Chart 5).

The trend is your friend 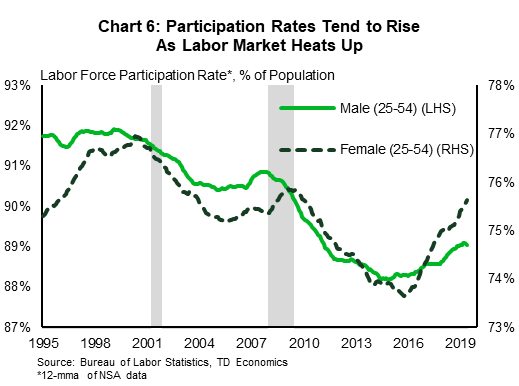 Instrumental to achieving this record employment rate was the increased participation of females in the labor force. From the 1950s through to 2000, the participation rate of females moved more or less continuously higher. Unfortunately, this trend stopped abruptly with the turn of the millennium and core female labor force participation reversed from 2000 to 2005. It had a brief period of increase from 2005 to 2008, but began descending again in the immediate aftermath of the Great Recession (Chart 6).

Since 2015, this trend in the female participation rate has reversed again, to the point that it has nearly completely retraced the post-recession losses. The improvement in female labor force participation is likely due to the relative strength of the job market. Looking at the pattern since 2000, there appears to be a close relationship to the business cycle. As long as a recession can be avoided, the recent improvement should continue. 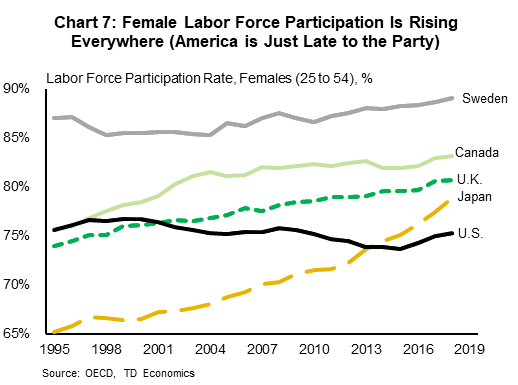 While there are a myriad number of factors that explain the longer-run trends in labor force participation, including the impact of the opioid epidemic, the last three years give hope that continued job growth can heal the scars inflicted by past economic downturns. 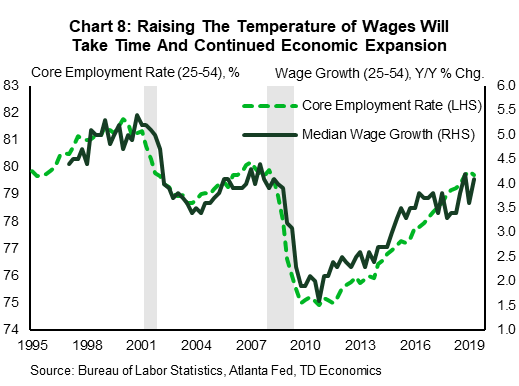 If we take the position that wage growth is still not satisfactory because there is still slack remaining in the labor market (Chart 8), the simple question is, what would it take to bring the heat? In a word: time.  If we assume the same pace of improvement as the past three years, given that the core participation rate is roughly two percentage points below its 2000 peak, it would take another three years of economic expansion to retake that mark.

Three years may seem like a long time, but it speaks to the damage caused by the economic downturn and the relatively slow pace of improvement from it. This is one reason to discount arguments that the length of the recovery itself suggests a recession is around the corner.

The punchline for job growth is simple. As long as the employed are coming from the ranks of people currently outside of the labor force, job growth of around 150k a month can continue, even while leaving the official unemployment rate relatively stable.

A theme of throughout Chair Powell’s recent testimony to Congress was that the unemployment rate may not be capturing all the slack in the labor market and that it could continue to make strides without putting upward pressure on inflation.

This note explores one obvious way this could happen – job growth continues to draw people back into the workforce until the core employment-to-population ratio returns to past business cycle peaks. Assuming this occurs at the same rate it has been over the past three years, it would take another three years before the peak core employment threshold is crossed. All the more reason for the Fed to do all it can to ensure the recovery continues.