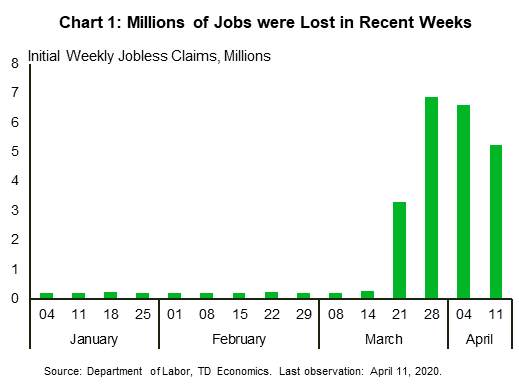 The United States has become the global epicenter of the COVID-19 pandemic, with over 600,000 confirmed cases as of writing. In order to stem the further spread of the disease, most states have issued stay-at-home orders and instructed non-essential businesses to shut down, leading to a sudden stop in economic activity, and millions of job losses.

With the economy entering a self-induced coma, state and local government finances have taken a massive hit. Revenue collected in the form of sales and income tax has all but disappeared. At the same time, expenses have risen significantly as authorities rush to respond to the growing pandemic.

As most state and local governments cannot run budget deficits, they will have to turn to rainy-day funds to provide some financial relief. However, for almost half of all states these are unlikely to be adequate in plugging large budgetary holes. Without sufficient federal aid, state and local governments will have to cut spending significantly, which could slow the pace of recovery once the virus is contained.

COVID-19 Has Made a Dent in State Revenues, While Expenses Rise 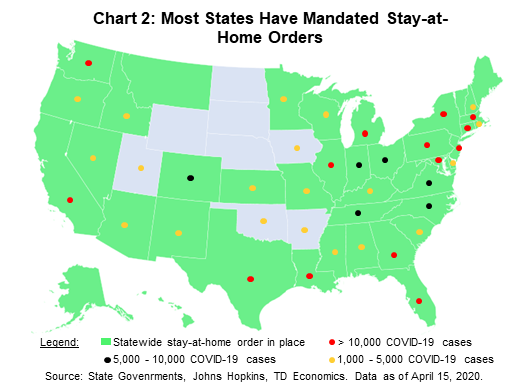 The impact of containment measures on revenues differs from state to state. States that have enacted more restrictive policies sooner are experiencing a larger drop in revenues. On the other hand, several states including Arkansas, Iowa, Oklahoma and Utah have yet to mandate statewide stay-at-home orders, despite current COVID-19 case counts in the thousands (Chart 2). The decline in tax revenues is likely not yet as striking in these states, but they face the risk of finding themselves in a more vulnerable position should the pandemic get out of hand.

As revenues decline, expenses are rising as states take COVID-19 head on. State and local governments have increased spending in areas most affected by the coronavirus. Support for health care, emergency treatment facilities, and unemployment insurance have all picked up significantly.

Adding to what is already a heavy burden, the turmoil in financial markets is having an adverse impact on state and local pension funds. These funds, which had increased the share of equities in their portfolios in recent years, are now struggling to generate income on their assets. At the end of the last year’s third quarter, state and local pensions had 47.3% of their portfolio invested in U.S. stocks. In the first quarter of this year, financial markets recorded their worst performance since the financial crisis, with the S&P 500 and the Dow Jones Industrial Average falling by 20% and 23%, respectively. 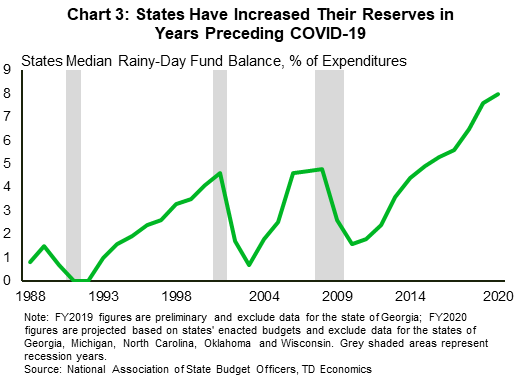 Since most state and local governments are required to balance their budgets, they will have to dip into their rainy-day funds to mitigate the pressure on both revenues and expenses.1 Fortunately, states have been building up their rainy-day funds in years preceding the pandemic. The median state balance for such reserves now sits at a record 8.0% of expenditures, or about $70 billion, according to projected data based on states’ enacted budgets for FY2020 (Chart 3).

Local governments also boosted their rainy-day reserves following the financial crisis. The median rainy-day fund balance for the largest 25 U.S. cities has grown from $387 million in 2007 to $582 million in 2018, representing a 50% increase.

Nearly Half of States Stand to Have Expenditures Exceed Revenues

Under the current circumstances, strong reserves are helpful, but are unlikely to be sufficient to close budget gaps. Indeed, for the majority of states, the spread of COVID-19 and measures to contain it will result in expenditures exceeding revenues, even when accounting for rainy-day funds. Without federal assistance, these states would have to cut spending.

In the absence of spending cuts, we estimate that 44 out of 50 states will see their budget balance move into operating deficits due to the impact of the pandemic. Even after factoring in all available rainy-day funds, we find almost 50% of states (24) will face budget gaps (Appendix, Table 1). 2, 3

In terms of pure revenue impact, the hit is largest for California and New York, whose revenues we estimate will decline by about $24 billion and $12 billion, respectively, relative to projections from their current fiscal-year enacted budgets. These are also two of the states most impacted by the coronavirus, New York being the epicenter of the pandemic with a case count in excess of 200,000 at the time of writing. Other populous states such as Texas, which has neither personal income nor corporate taxes, and Florida, which collects no personal income taxes, may feel a relatively lower, but still sizeable, impact on revenues due to the sudden stop in economic activity.

Before factoring in reserve balances, the revenue hit would create a budgetary shortfall of $21 billion and $5.8 billion, or 0.7% and 0.3% of GDP, respectively for California and New York, all else equal. Relative to the size of the economy, Connecticut is likely to see the largest budgetary shortfall of any state at 0.9% of GDP. Meanwhile, on the other end of the spectrum, New Mexico is likely to end with a substantial budgetary surplus equivalent to 1.4% of GDP, even after the revenue shock.

In order to plug budgetary holes, state governments can draw down rainy-day fund balances. Indeed, several states, including Arizona, Georgia, Maine, Maryland, Nebraska, Washington and California have already moved forward in using reserves in the battle against COVID-19. Rainy-day fund withdrawal conditions vary from state to state, but can generally be summarized under three main concepts: budget gaps, volatility and forecast errors.4 Our analysis suggests that conditions will be met under the current circumstances to allow such withdrawals for all states.

Should state governments decide to use their entire rainy-day fund reserves to balance their budgets, roughly half of all states are still likely to end the current fiscal year with a non-negligible budgetary shortfall, assuming no other spending cuts. We outline the states with the biggest gaps relative to GDP in Table 1 in the appendix.

The current pandemic is the type of exceptional situation rainy-day funds are for, but totally exhausting such reserves to balance state budgets is not without costs. Indeed, during the recovery phase, state governments will likely need to boost spending to support a rapid and durable recovery. Empty rainy-day fund balances could push state governments toward future fiscal austerity, which in turn could further delay the recovery.

Policymakers Have Responded, But it is Not Enough 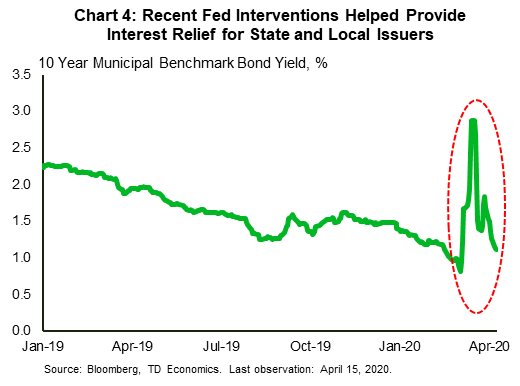 Without support from federal policymakers, state and local governments will have to enact severe budget cuts to balance the books. State and local government are an integral part of the American economy, accounting for about 13% of total employment. As the economy enters a period of contraction, this could turn into an additional headwind and would crush any hope of a “V-shaped” recovery.

We saw this play out in the aftermath of the Great Recession. In 2008, state and local governments drastically reduced spending in response to falling revenues. In the following years, spending was slow to recover as governments looked to build up their rainy-day funds. This lowered GDP growth by 1.2 percentage points between 2009 and 2012.5

We are now witnessing a near-term shock to economic activity far worse than 2008, but the reaction of policymakers could prolong the recovery just as it did then. For example, officials in Arkansas, Missouri, Idaho and Ohio have moved to order budget cuts, while a spending and hiring freeze has been implemented in Maryland. In states like Florida and New York, discussions around reigning future spending in have also started to surface. Fortunately, we have seen support come through Congress and the Federal Reserve in recent weeks, but more is needed.

On the monetary policy front, the Federal Reserve enacted measures to support state and local government finances. It announced that it will expand an emergency lending program to include purchases of short-term municipal bonds and variable-rate demand notes. Following these announcements, yields on municipal bonds declined, providing some much-needed interest relief for state and local issuers (Chart 4). However, this does not address the budget shortfall issue as bond proceeds largely go toward funding capital projects and not operating expenses.

The Fed’s moves last week, on the other hand, do ease pressures on the operating budget. It established the Municipal Liquidity Facility, which will offer up to $500 billion in lending to states and municipalities by purchasing tax anticipation notes, tax and revenue anticipation notes, bond anticipation notes, among other short-term assets. Some states will be able to use these revenues towards their operating expenses, relieving stress on state budget balances.

Congress, too, has been hard at work legislating several relief packages, many of which contained help for state and local governments. The Families First Coronavirus Response Act, which was signed into law on March 18, included $1 billion in emergency funding to state unemployment trust funds, while also temporarily increasing the federal share of Medicaid by 6.2 percentage points. Should the increase be maintained for the entire year, it could be worth around $35 billion in additional support. The Coronavirus Aid, Relief, and Economic Security (CARES) Act enacted by Congress on March 27, 2020 included $150 billion in grants for state and local governments as part of a $2 trillion package.

While these developments are certainly most welcome, they are likely not enough. These measures will help cover the extra COVID-19 related expenses but will not cover the full decline in revenues. Notably, the CARES Act grants came with restrictions, as they are exclusively to be used to cover costs directly related to the coronavirus response that have yet to be budgeted by state and local governments.

There are early indications that Congress is working towards a “Phase 4” relief package to provide additional direct aid for state and local governments. According to our calculations, the next funding package for state and local governments should amount to at least $200 billion in order to cover budget shortfalls. If the virus impact intensifies, policymakers should consider a larger amount.

The rapidly spreading coronavirus has caused sudden stops in large sections of the U.S. economy as authorities mandate restrictive measures to contain its spread. The immediate impact, which is starting to come through in various economic indicators, is tremendous and we forecast U.S. economic growth to contract by double-digits in the second quarter.

At the forefront of response efforts are state and local governments. The drop-off in economic activity is creating a large hole in their revenues at the same time as virus-related expenses skyrocket. Until recently, they also had to contend with an unprecedented rise in their borrowing costs as investors flocked to safer assets. Although the response from policymakers has been encouraging thus far, more assistance is likely required for these entities so that spending is not reined in when the virus finally passes.