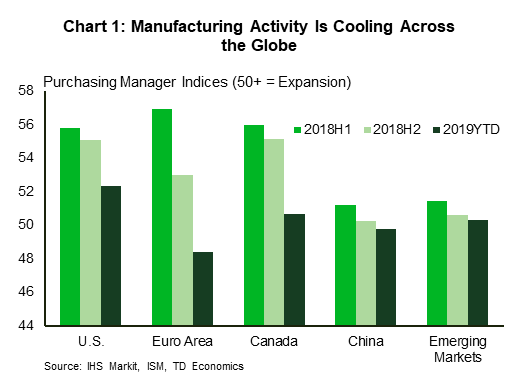 Manufacturing industries around the world are undergoing a synchronous slowing (Chart 1). In fact, in some major economies, the manufacturing sector is in contraction (i.e. China, Euro Area), while in the U.S., the pace of expansion has decelerated.

Softness in the U.S. manufacturing sector is particularly concerning as it could be a harbinger of a broader economic slowdown. In the current context, manufacturing weakness appears less related to domestic issues, and more to global factors. Specifically, elevated trade uncertainty and slowing global growth. Indeed, the deepest declines in manufacturing shipments are concentrated in sectors that are relatively more export intensive.

While external conditions have worsened, U.S. domestic demand remains healthy. As in previous episodes, most recently in 2015-2016, resilient domestic demand will likely put a floor on U.S. manufacturing activity. However, if external conditions weaken drastically, it could push manufacturing to levels that are consistent with a more widespread economic slowdown. Shielding against this outcome is a key reason for the Fed’s pivot to insurance cuts.  Given the delicate state of the U.S. economy this is an area well worth paying attention to.

U.S. manufacturing activity started cooling in the middle of last year, when growth in manufacturing shipments, measured in real terms, began to trend down (Chart 2). Shipments growth weakened from around 3% year-on-year in April 2018 to 0.6% in May 2019.1 While Boeing production cuts had some impact, they were only implemented in April 2019.  The longer-running drop in shipments growth appears to be driven by exports, which saw growth decline significantly over the same period. 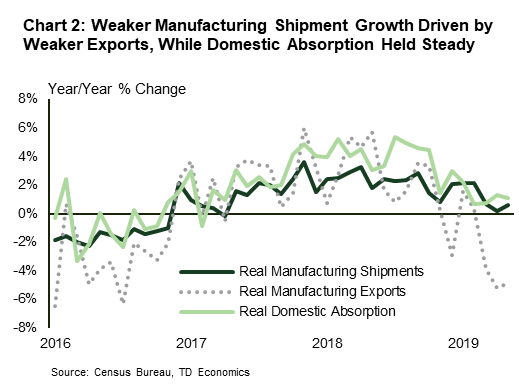 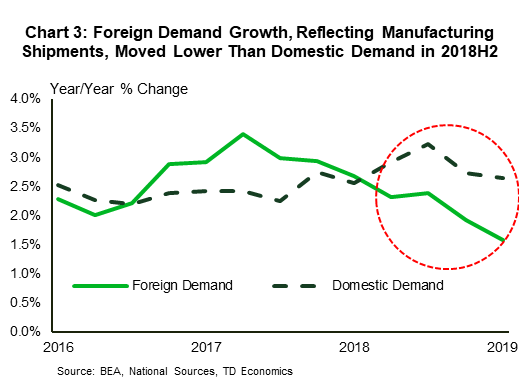 Meanwhile, domestic absorption growth – that is output intended for the domestic economy – weakened slightly, but not nearly as much as exports.2 This indicates that the moderation in manufacturing shipment growth is due primarily to external factors.

Indeed, foreign demand growth moved below that of domestic demand in the second half of 2018, tracing the trend in manufacturing shipments (Chart 3).3 Rising uncertainty and cyclical slowing likely brought foreign demand growth lower but disentangling the two impacts is difficult. What is discernible is that U.S. manufacturing shipments are responding to global conditions.

A plausible reason for the turn down in shipments is the direct intensification of the U.S.-China trade war. It’s no coincidence that manufacturing activity and associated exports began falling around the same time as the ratcheting up of the U.S.-China trade war. Afterall, it was in September 2018 when the two countries went punch-for-punch with tariff measures.4 Interestingly, while these developments likely dampened manufacturing exports to China, we observe slower growth across all major trading partners (Chart 4). Average monthly year-over-year export growth went from being above 7% in the first half of 2018 to contractions for China and Canada, while falling by around six percentage points for the European Union and Mexico. Given that the decline in export growth has been broad-based, it appears to be less due to the direct trade disruption between China and the U.S. and more due the measurable slowdown in global growth alongside the fog of uncertainty created by the growing trade disputes. 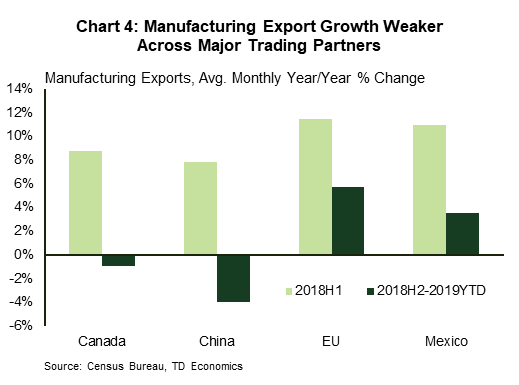 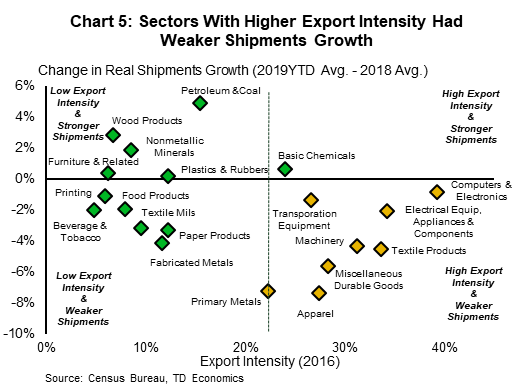 Rising trade uncertainty and slowing global growth have weakened U.S. manufacturing activity. In the first quarter of 2019, growth in manufacturing sales sharply declined, which likely prompted less hiring (Chart 6). This will likely get worse before it gets better, as there seems to be a six-month lag between sales and hiring.

To the extent trade uncertainty continues to rise and/or global growth weakens further, the manufacturing sector will bear the brunt of the impact, with sales and hiring continuing to decline. However, healthy domestic demand growth will likely provide some counterbalance to international weakness. 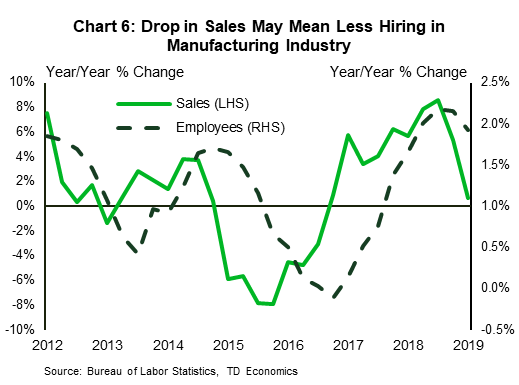 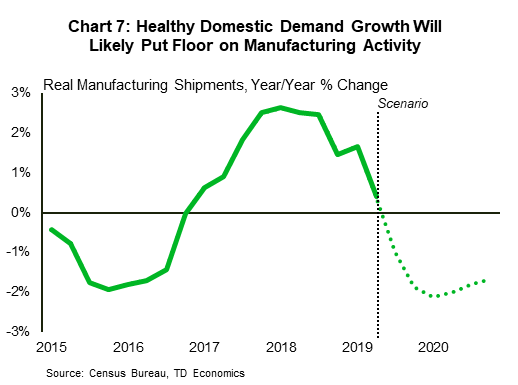 To illustrate this point, we examine a scenario where domestic demand increases at a steady rate of around 2% out to the fourth quarter of 2020, while foreign demand growth has continued to fall, declining to 1% – the lowest growth rate since the Great Recession. In this scenario, manufacturing shipments contract through the rest of 2019, before stabilizing then rising modestly in 2020 (Chart 7). 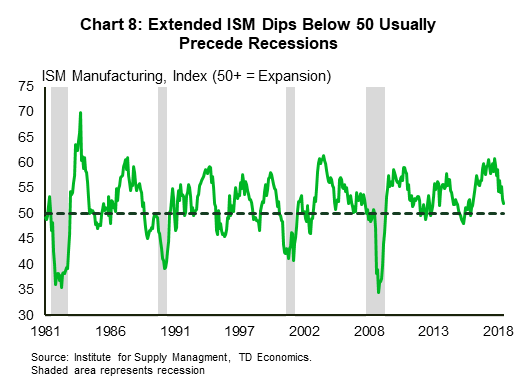 This scenario assumes a weaker path for foreign demand than we currently expect, but still produces a manufacturing projection that is not recessionary. In 2015-2016, manufacturing shipments saw a similar decline for almost identical reasons: global growth weakened, and the exchange rate appreciated sharply. However, domestic demand remained resilient, effectively introducing a floor on manufacturing activity. We expect domestic demand to again soften the blow brought on by external factors.

Still, the domestic demand shield is not impenetrable. Existing trade disputes may escalate, new trade wars may open up, geopolitical risks may rise, or the European economic slowdown may turn out to be much weaker than anticipated. On the whole, the direct hit of slowing manufacturing activity to the U.S. economy will likely be small (given manufacturing only makes up 11% of U.S. GDP), but the indirect effects may be larger. Whenever the Institute for Supply Management’s (ISM) manufacturing index has dipped below 50 for an extended period, a recession has followed (Chart 8).

U.S. manufacturing activity has slowed in recent months as global developments such as rising trade uncertainty and softening global growth constrain foreign demand. Domestic conditions, on the other hand, appear more stable and do not seem to be weighing heavily on manufacturing activity. Indeed, within manufacturing, sectors with lower degrees of export-intensity have either avoided contraction or experienced a much more muted slowdown so far this year.

Identifying the source of recent manufacturing weakness gives some insight into what developments to keep on the radar. First, it means continued attention to global growth. From an already-weakened state, any sharp deterioration could bring manufacturing activity to a level that becomes a risk to the broader U.S. economy. On the other hand, signs that global growth is bottoming implies that this risk may begin to fade.

Second, with weakened foreign demand, domestic demand becomes an even more important driver of both manufacturing and broader U.S. economic growth. In the past, its resiliency has softened the impact of negative external shocks on manufacturing activity. There are positive signs in recent data on this front, particularly in retail sales that have rebounded with gusto from their soft patch earlier in the year.

The Fed’s communicated pivot to insurance cuts should work through both of these channels. Lower U.S. interest rates support global financial conditions and limit upward pressure on the dollar. But, more directly, lower interest rates are meant to shore up domestic demand. If successful, they should show up in improved manufacturing activity in the months ahead.