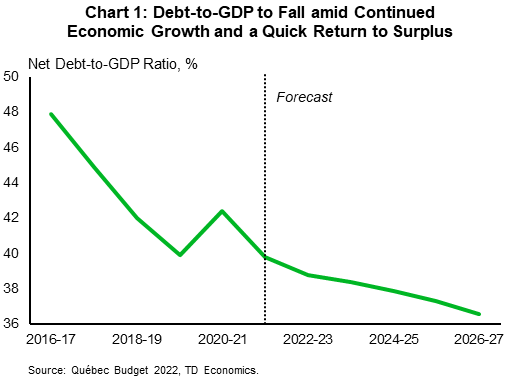 Backed by expectations of healthy economic growth and increasing fiscal leeway, the Quebec government will introduce some $22 billion in new initiatives through FY 2026/27, the largest portion of which will go towards restoring the healthcare system, stimulating the economy, and helping residents cope with rising inflation pressures.

Even with these measures, however, the government envisions balancing its budget (before contributions to the Generations Fund) by FY 2023/24. Notably, Quebec’s books were  already in a surplus position in FY 2021/22, once COVID-19 support measures are excluded. Steadily rising GDP should also help the province make headway on its net debt burden, which is projected to drop from 39.8% in FY 2021/22 to 36.6% by FY 2026/27.

The Quebec government is projecting real GDP growth to average about 3.7% from 2021 to 2023, which is a touch softer than our own projection. We are in line with the government in terms of our nominal GDP projections in 2021 and 2022, with their forecast calling for solid growth of 9%, on average. However, we anticipate stronger nominal GDP growth in 2023, with the wedge between us and the government accounted for by our higher inflation assumption.

Even with a healthy nominal GDP forecast, overall revenue growth is projected to slow to 2.2% in FY 2022/23 after a 10.5% surge last fiscal year. The main weight is federal transfers, which are expected to decline for the second straight year, continuing a partial unwind from the 21% gain seen during the first year of the pandemic.  After this fiscal year, revenues are expected to grow at a 3.1% annual average pace.

Province to keep Spending Growth Elevated in the Near Term

After leaping higher by 15% in FY 2021/22, program spending growth is set to cool, but remain relatively firm at 5% in the upcoming fiscal year. After which, it is projected to average 3% over the next four fiscal years.

As part of its overall $22 billion commitment to new initiatives, the government will spend $3.8 billion to help people cope with rapidly rising inflation. Most of this money will be spent at the end of FY 2021/22, with the government delivering a one-time payment of $500 to adults with incomes of $100k or less. The remaining money will mostly be spent on affordable housing initiatives, including helping households make their rent payments, and adding new affordable supply to the market.

At $8.9 billion, healthcare spending makes up about 40% of the total earmarked for new measures, with funding to be put towards human resources, access to data, information technology and modern infrastructure. Elsewhere, new education spending is projected to amount to $2.8 billion through FY 2026/27. Funds will partly go towards improving access to, and boosting graduation rates from, higher education settings. Over the same period, some $2.2 billion will be spent on supporting communities and strengthening community action, including expanding services for vulnerable families and youth, promoting gender equality, and supporting Indigenous peoples. The government will also spend $350 million on environmental initiatives, including helping the transition to green energy and supporting sustainable practices.

Notably, the government has earmarked $4.2 billion over 6 years towards stimulating economic growth. This money will go towards increasing productivity and supporting regional economic development. This funding will also flow towards strengthening the integration of immigrants into the workforce and supporting the recovery in the cultural sector, which has been devastated by COVID-19.

To boost productivity, the government will implement its Research and Innovation Strategy while also devoting resources towards continuing the digitalization of businesses in the province. In addition, some $224 million will be put towards stimulating investment in new technologies, entrepreneurship, and exports. The big maneuver here will be extending the higher tax credit rates, introduced in last year’s budget through the investment and innovation tax credit, to this year. To support regional development, the province will undertake various measures, including investing in regional air transportation, the bio-food sector, and preparing the tourism industry for recovery.

Despite program spending growth vastly outpacing that of revenues, the deficit is projected to shrink from about $4 billion in FY 2021/22 to $3 billion in the upcoming fiscal year. This is because COVID-19 support payments are forecast to shrink by about $7 billion in FY 2022/23. The government plans to fully eliminate its deficit by FY 2023/24, with the surplus expected to gradually rise to $2.2 billion in FY 2026/27.

The government’s improved budget balance, coupled with expectations of relatively firm economic growth, is expected to keep net debt-to-GDP on a downward path. Indeed, the ratio is forecast to drop from 39.8% in FY 2021/22 to 38.8% in the upcoming fiscal year.

By FY 2023/24, Quebec’s debt ratio is expected to be 38.4%. In comparison, Ontario forecasted its FY 2023/24 ratio to be 43.6% in its fall fiscal update. Even allowing for the possibility that the Ontario’s debt burden may look somewhat better once its budget is released in April, that’s still quite a gap between the two provinces. And in fact, Quebec’s debt burden has been below Ontario’s since FY 2020/21. Note that Quebec’s net debt-to-GDP ratio is forecast to fall even with robust capital investment expected to take place through the Quebec Infrastructure Program. For this year, capital spending intentions are flagging a 17% surge in public sector construction spending.

After a detour brought upon by the pandemic, the government is expecting to be back in black ink in relatively short order. Note that Quebec ran surpluses for 5 straight years before the pandemic struck. Meanwhile the debt burden is forecast to continue falling, which would extend the years-long downtrend in this measure.

Government spending and investment have played important roles in Quebec’s speedy recovery from the pandemic and the budget suggests that further growth support could be in cards for 2022. Meanwhile, the one-time payments to households by the government(amounting to 0.6% of GDP) will help soften the bite on incomes and spending from sharply higher consumer prices.