This report is a Q&A on the outlook for housing markets across Canada. In it, we detail what's happened so far and our expectations for Canadian and regional activity, both in the near and longer-term. We also articulate factors that might help to lessen the extent of adjustment and address the major risks to our outlook. 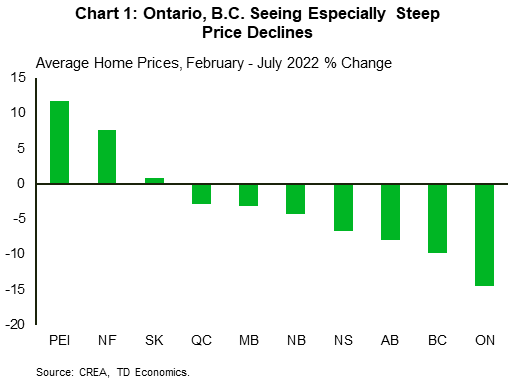 Question 1: It's well known that Canadian housing markets are softening as borrowing costs have jumped. How do we judge the depth of the correction so far?

In the second quarter, Canadian home sales declined by 20% on a quarter-on-quarter basis, while national average home prices dropped by 9%. And, national sales and prices took another leg down in July. However, peeling away the headline reveals a more nuanced regional story (Chart 1):

Relatedly, benchmark prices (which are a less volatile measure than average home prices) for single-detached homes have dropped 7% since February, while condo prices have held up better. This reflects the steeper erosion in affordability for detached units during the pandemic. It is also similar to the 2017-2019 experience, where a host of macroprudential measures (i.e., Ontario's Fair Housing Plan, B-20) and rising interest rates cooled detached markets following their steep affordability deterioration, while condo prices increased.

Unlike the 2017-2019 period, we think that condo prices will drop in coming months although likely not the same extent (or perhaps duration) as their single-detached counterparts. To this point, we've already seen some softening as they've declined in 3 of the past 4 months. Note that condo affordability also worsened significantly during the pandemic. In addition, rising borrowing costs and falling prices could be weighing on investor demand for these units, as they are providing some counterbalance to rapidly rising rents.

Question 2: How deep will the correction be and how long will it last?

Canadian average home prices could fall 20-25% on a peak-to-trough basis from 2022Q1 – 2023Q1 (Chart 2), as sales crater by about 35% over the same period. Reflecting their affordability deteriorations (Chart 3), steeper declines are forecast in B.C and Ontario while more middle-of-the-road retrenchments are likely in Alberta, Quebec, and the Atlantic Region. Meanwhile, we expect prices to hold up better in Manitoba and Saskatchewan over this period.

Our forecasted decline in national home prices would only partially retrace the 46% runup over the course of the pandemic. As such, our forecast can be more aptly described as a recalibration of the market, instead of something more severe. 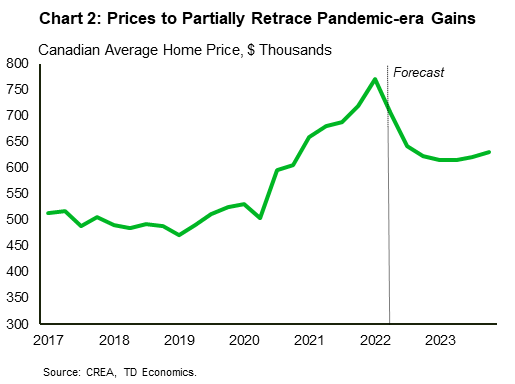 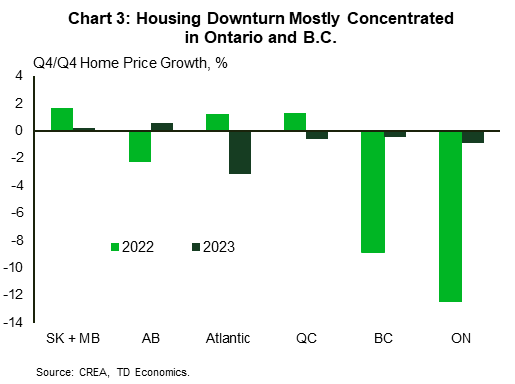 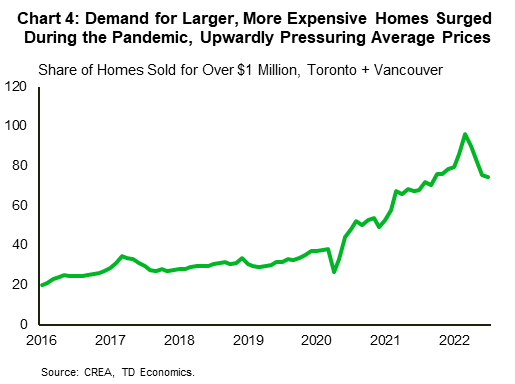 Note that our forecasted peak-to-trough decline in Note Note that our forecasted peak-to-trough decline in Canadian home sales falls well within the range seen in past housing downturns and was surpassed by the Global Financial Crisis, where sales tumbled by 38%. Our projected price drop represents an unprecedented decline (at least from the late 80's onwards, when the data began). However, it follows an equally unprecedented runup during the pandemic.

As previously noted, demand for larger, more expensive housing soared during the pandemic (Chart 4), which imparted even more upward pressure on average home prices. Because of how they're calculated, average home prices are disproportionately impacted by transactions that take place at the upper (or lower) end of the price spectrum. This has now switched from being a tailwind to a headwind for average prices, as valuations for more expensive units (like detached housing) are unwinding at a relatively speedy pace.

Question 3: Why a "recalibration" and nothing worse?

We think there are some factors that will help cushion housing demand and prices: 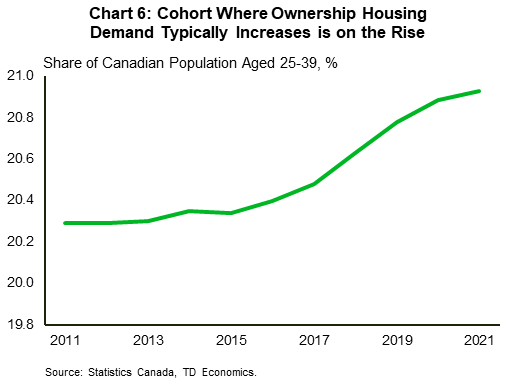 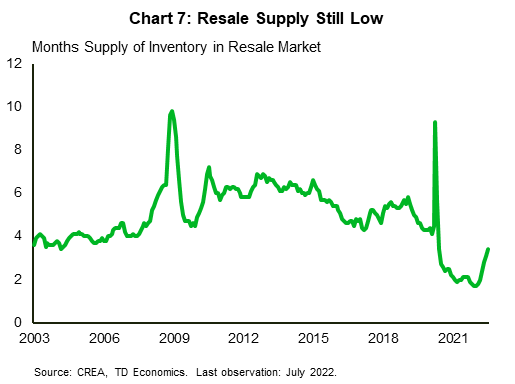 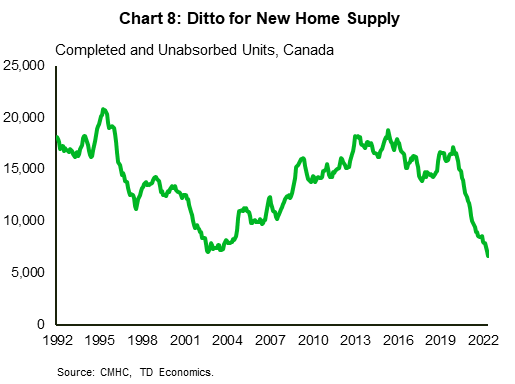 Question 4: What is your longer-term view of the market?

Long-term, we're more positive on the outlook for housing. This has to do with our view that population growth should remain healthy, underpinning fundamental demand for housing. Note that the federal government is targeting 432k new permanent residents in Canada this year. Much of this quota is being filled by persons who are likely already in the country and are transitioning from non-permanent to permanent resident status. Data from Immigration, Refugees and Citizenship Canada indicates that in a typical year, these transitions account for about 25% of new permanent residents, although this figure is closer to 50% in 2022. However, if you net these people out, immigration this year is on track to match 2017's solid level, which was during Canada's most recent population boom.

After next year, we estimate that to just keep up with population growth (and other drivers of fundamental demand), Canada will require about 215-220k new units each year through 2028, which is somewhat above the country's pre-pandemic run-rate for starts. However, this is only part of the story. With interest rates rising and home prices likely to only partially retrace pandemic-era gains, affordability should remain strained over the next several years. So, the recovery stage of the cycle is likely to reflect a slower price growth trend than the past decade, where Canadian average home prices rose at annual average pace of 7%.

Question 5: What about housing's impact on the overall economy? 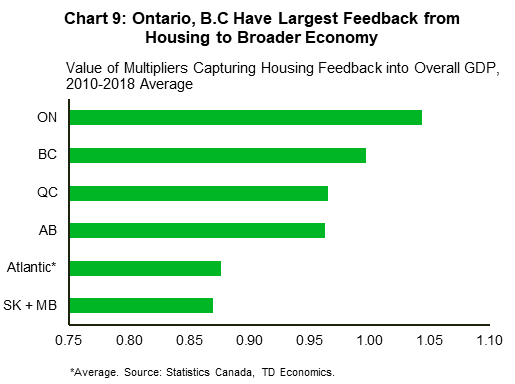 Our forecast anticipates that the housing downturn will shave from 1 – 1.5 ppts from GDP from 2022Q2 – 2023Q1 as residential investment declines and consumer spending is hit by falling home prices. This is a milder hit to growth than what took place during the Global Financial Crisis and the late-80s housing downturn. At the same time, it's more in line with what took place during the mid-90s and is more severe than the policy-induced decline in activity observed from 2017-2019. It also isn't enough, in our baseline forecast, to cause a contraction in overall GDP.

Regionally, the impacts of the housing downturn are likely going to be felt more in B.C. and Ontario. Housing should retrench the most in these two markets and their overall economies have historically been more sensitive to spillovers from housing (Chart 9). On the opposite end, there should be less spillover in Saskatchewan, Manitoba and the Atlantic Region as housing should hold up better, and the historical linkages between housing and the rest of the economy aren't as pronounced.

Question 6: What are the risks or special considerations for your outlook? 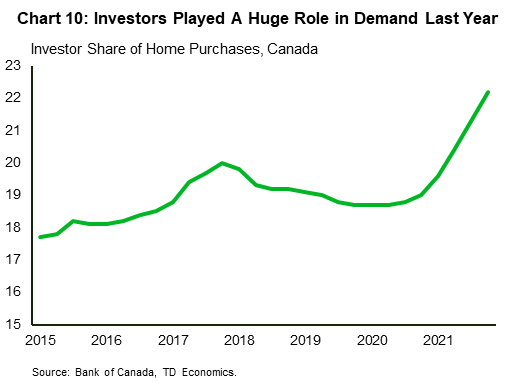 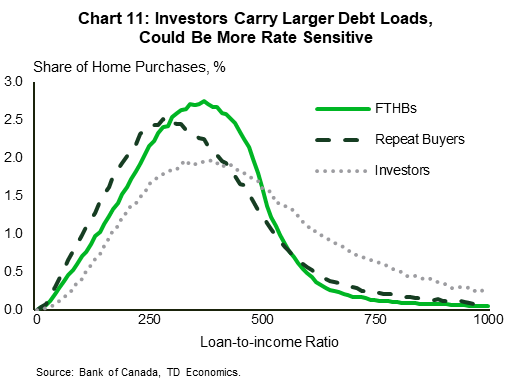