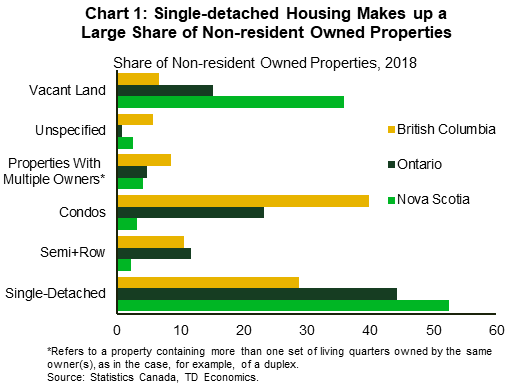 The federal government's ambitious April 19th budget included a wage range of new policy initiatives. Beyond pandemic support measures, commitments to support low-wage workers, students, indigenous communities, seniors and small and medium sized businesses were pledged. On top of these commitments, massive investments in the green economy were pledged. However, the marquee measure was a new, national daycare program, projected to cost $30 billion to set up and $9 billion annually thereafter.

Despite calls from a number of analysts to take action to cool the nation's frothy housing market, the government stayed its hand on broad based taxes. Still, a few notable measures were included. Probably the most attention-grabbing was the announcement of a new 1% tax on the value of vacant units owned by non-residents. This tax would become effective January 1st, 2022 and is projected to increase revenues by $700 million over 4 years. While data covering non-resident housing ownership is generally sparse, we note that single detached units made up about half of non-resident homes owned across Ontario, B.C. and Nova Scotia combined in 2018, while condos accounted for about 1/3rd (Chart 1). 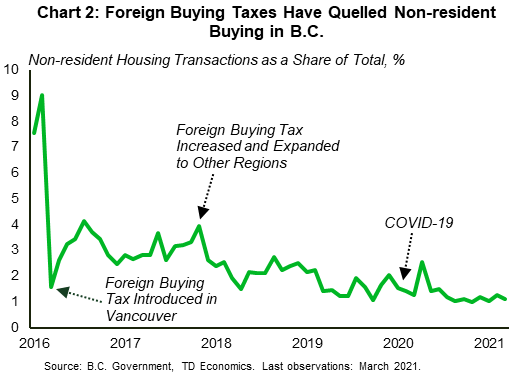 This measure could influence both housing demand and supply, although we think it will do little to curb current housing market froth which appears to be overwhelmingly domestic-driven. In addition, non-resident activity has already been cooled to a significant degree by foreign buying taxes already implemented in B.C. and Ontario. In B.C. for example, non-resident purchases accounted for only about 1% of total transactions in the first quarter. In fact, this share plummeted after the introduction of foreign buying taxes in Vancouver and has remained low amid a subsequent increase in the foreign buying tax rate, and its expansion into other markets (Chart 2).

As an analog to the national policy, a non-resident speculation tax has already been implemented in B.C. Introduced in 2018, this measure charges a 2% tax rate on nearly all eligible properties. It's difficult to tease out the impact of this policy on demand, as several other measures were introduced at around the same time, including the above-mentioned changes to the foreign buying tax, along with higher transfer and property tax rates for expensive houses. However, all these measures do not appear to have moved the needle that much, as of the number of non-residents who own either one or multiple properties in B.C. was flat from 2018 to 2019 according to Statistics Canada. This compares to a 1% gain for resident owners.

A national non-resident vacancy tax could positively impact rental supply by incenting some owners to rent out their vacant units. Data gaps make it difficult to precisely assess the potential impacts on rental supply. However, we note that the number of condominium units rented out in key markets in B.C. jumped by 16% in 2019, versus the 2% decline the prior year. This suggests the potential for some positive impact on rental supply from the federal government's proposed measure. However, this stock would likely be more expensive to rent than purpose-built units. Less probable are increases in resale housing supply. We note that new listings declined in B.C. during 2019 and, while we don't know what would have happened in absence of the policy, it's clear that resale supply didn't boom higher.

Budget 2021 also included measures to boost housing supply, nearly all of which is meant for vulnerable Canadian populations. To this end, the government is pledging an additional $2.5 billion over 7 years and bringing forward $1.3 billion of previously allocated funds, mostly into FY 2021/22 and 2022/23. This funding will go towards the construction, repair and support of about 36,000 units, with an emphasis on accelerating construction and repair timelines. We applaud the government's efforts in this crucial area.

Some $300 million of this funding will flow to the Rental Construction Financing Initiative (RCFI), which is meant to support the construction of new rental supply by offering favourable financing terms to developers. The government hopes that this will result in the conversion of excess commercial space (driven in part by COVID-19) into 800 market-based rental units. Of course, 800 units is a drop in the ocean with respect to rental supply, although nearly 25,000 units have been supported through the program since 2017, according to the government. It's worth noting there is some debate regarding how much the program has incented builders to construct rental units (over other types), versus improving the financing terms for those already planning to build rental properties1.

Other measures include the federal government's intention to invest $4.4 billion over 5 years, available through interest free loans of up to $40,000, to help homeowners complete energy efficient retrofits. In addition, in situations where two or more individuals who are not considered to be "relations" (i.e. related by marriage, blood, etc) purchase a home, only one will now have to list the property as a principal residence in order to qualify for the GST New Housing Rebate, instead of all purchasers as before. It's unclear what, if any, impact this will have on demand.

While some modest steps were put forth in the federal budget, the possibility of further actions to cool the nation's heated housing markets remains. At a recent event, the Finance Minister noted she would closely monitor the outcome of OFSI's stress test proposal on uninsured mortgages (see note) and could follow with similar changes to the insured mortgage market. As well, there will be growing pressure on policymakers to take additional action if housing markets don't begin to cool from their recent frenzied pace.