Today’s Federal budget hewed closely to the political balloons that were floated in recent weeks. There was no single headline measure, but a number of initiatives that will impact would-be homebuyers, indebted students, workforce engagement among the older segment of the population and so forth. Likewise, there weren’t any measures that will prompt us to alter our near-term economic projections. Many of today’s proposals have the potential to be productivity-enhancing, but will need to judged with the test of time.

Goosing near term housing demand, with supply to lag 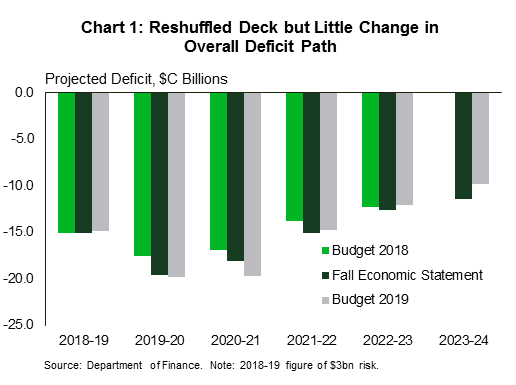 Housing initiatives had a place of prominence, as Budget 2019 sought to address both the demand and supply of the affordability challenge. On the demand side, the key new measure is the Canada Mortgage and Housing Corporation (CMHC) First-Time Home Buyer Incentive. This program will provide first time buyers a shared equity mortgage equal to 5% of the cost of an existing home, or 10% for new builds. The program is limited to households with incomes under $120k per year, and with a mortgage amount that is a maximum of four times household income (i.e. homes priced around $500k). On the latter point, last month’s national average home price was near the cap ($460k), while average sale prices in Toronto and Vancouver were well above the cap ($765k and $925k, respectively). Details of the exact functioning of the program are not yet available, such as what happens if a home is sold at a loss, in the event of death, etc.

Also driving the demand side was a widely anticipated increase in the Home Buyers’ Plan (HBP) tax free RRSP withdrawal limit, from $25k to $35k. The HBP will also be made available to Canadians who have experienced the breakdown of a marriage or common-law relationship, even if they would not otherwise qualify.

In terms of the cost of these measures to government coffers: CMHC will provide up to $1.25 billion over three years for the First-Time Buyer Incentive, but the cost to the government is minimal, estimated to be $30 million per year. The HBP price-tag is similar in magnitude.

In terms of the economy, these measures are not game-changers, but they will have a modest impact on markets. Early analysis suggests that sales could be pushed up by 2% to 5% through end-2020, with prices rising by a similar amount given an unchanged supply path in the near-term.

On this front, the government expanded on previous housing supply-side measures, but these will take a much longer timeframe to impact the market. The Rental Construction Financing Initiative will be given an additional $10 billion over nine years, and extended to 2027-28. The expanded program is expected to now support 42,500 units across Canada (a net addition of 28,500 units relative to the 2018 Budget). The supply focus will be on areas of low rental supply. This is a well-received initiative, but there will be a gap between near-term upward demand pressures created by today’s announcements versus the slower moving change in supply. This is already evidenced in the status report provided today: the initiative was introduced in 2017 and has so far resulted in the announcement of a total of only 500 rental units (with 50 projects being prioritized to receive a loan, i.e. still in the pipeline). Put differently, over a five-fiscal year horizon, the government expects to spend just $385 million of the anticipated $10 billion.

All aspects of the working life examined

Budget 2019 took a three-pronged approach to skills and labour markets, aligned with age groups. For younger Canadians, the cost of education, at least for those who take Canada Student Loans, will be reduced. The interest rate on these loans will now be set at the prime rate, a reduction of 2.5 percentage points, and a six month no-interest grace period was also introduced.

For those aged 25 to 64, the government is introducing a Canada Training Credit, a refundable tax credit available to those earning between $10k and $150k. The credit works via an account, which has $250 added per year, to a lifetime of limit of $5000. Individual balances will be communicated as part of the annual income tax filing process. The balance can be applied against half of the cost of training fees at colleges, universities or other institutions, starting in 2020. Coming alongside the credit is a new EI Training Support Benefit, which provides income support (at 55% replacement). This allows for up to four weeks of leave for training, every four years. These measures come with an approximate $500 million per year price tag.

For Canadians aged 65 years and older, the focus appears to be on extending engagement within the workforce. The Guaranteed Income Supplement for lower-income Canadians will see its earnings exemption expanded from its current limit of $3500 per year. The full exemption will rise to $5000 per year, with a 50% exemption for the next $10,000 of earnings. Seniors will be automatically enrolled to receive CPP benefits at age 70. The government estimates that there are about 40,000 Canadians who are eligible for but not receiving their CPP benefits.

If you’re thinking about buying an electric vehicle, you’re in luck. The government will introduce a $5000 credit for electric and fuel cell vehicles up to a sticker price of $45,000, starting in fiscal 2019-20 (hybrid vehicles are not included in this credit). An expanded capital cost deduction for business purchases of these vehicles is also coming, up to a limit of $55,000. This is $25,000 higher than the current limit on vehicle purchases. The government is also transferring $1 billion to the Federation of Canadian Municipalities to be used to support the greening of community buildings, home energy efficiency retrofits, and improving energy efficiency in affordable housing developments. Municipalities will also benefit from a further, immediate $2.2 billion transfer to be spent on infrastructure needs more generally.

Stock option compensation in the crosshairs

Keeping with the Liberal government’s agenda towards the redistribution of income and wealth, there will now be a $200,000 annual cap on employee stock option grants that receive the current tax-preferred treatment (i.e. the same tax rate as capital gains). This applies to fair market value. Thereafter, the amount will be taxed as regular income. This change will apply only on a go-forward basis, and an exemption will be made for small, fast growing firms. Further details, including what qualifies a firm for exemptions, are due this summer.

There were little other changes, particularly from an investor’s perspective. The oft-rumoured change to the capital gains inclusion rate was nowhere to be found.

Little on the business front

Canadian businesses will need to be content with the accelerated capital depreciation introduced in the Fall Economic Statement. Skills training will be a long term boon for firms, but there was otherwise little new in today’s budget to address international competitiveness issues. There was again no mention of a longer-term tax system review (both corporate and personal) to address how the economic reality has changed since the Carter Commission’s report more than 40 years ago.

The government anticipates little change to their debt management strategy. Total market debt is set to rise by $31 billion in the coming fiscal year, to hit a total of $754 billion. This new financing need comes alongside $250 billion of maturing debt that will need to be refinanced. The government plans to address this via expanded issuance of treasury bills, intended in part to address shortages  in this market that have sent these borrowing costs below the Bank of Canada’s overnight interest rate. On the bond side, more supply in the 3 to 5 year range is planned. Despite the current low interest rate environment, the debt management strategy did not include any discussion of ultra-long maturity debt issuance.

Déjà vu. Last year’s budget was a grab bag of initiatives that ate up the growth dividend. This year was a repeat, with the added provision that details are forthcoming for many of the new initiatives. Looking at the major items, developments to address housing supply are welcomed, but demand initiatives are likely to add upward pressure to these markets in the near-term. Measures to improve lifelong skills, expand access to education, and ease late-life earnings are also well received, but the knock-on effects will only be observable over the longer-term. Overall, this is a marginally growth positive budget, however, we don’t anticipate any material change to our economic forecast as a result. On that note, today may mark the last ‘grab bag’ budget, as our Quarterly Economic Forecast sees a more muted outlook that may generate negative growth dividends. Ultimately, with only modest budget deficits on the horizon, there is little here to keep us up at night, or get our blood pumping.