They Get Low and They Get High: Crude Oil Prices Stayin' Alive 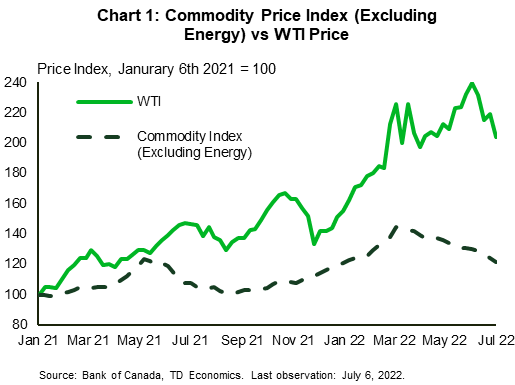 Up to the early summer, crude prices had managed to hold up relatively well compared to a number of other commodities such as copper and lumber.  However, that narrative has shifted more recently, with WTI prices falling victim to almost 15% plunge since its peak of more than $120 per barrel in June.  Last week, the price slipped below the psychological US$100 per barrel mark, which is a 3-month low. Mounting recession fears, risk aversion and a soaring US dollar that had been dealing a significant blow to the commodity complex more generally have spilled over into the market for crude. (Chart 1).

Despite the drop in prices, physical oil markets remain tight, which suggests that the decline in prices seen in recent weeks can largely be chalked up to a reversal in the fear premium that had been steadily building up earlier this year. On a daily production-demand basis, the global oil market stood roughly in balanced territory as of June 2022 (Chart 2) thanks in large part to growing output in non-OPEC countries. These gains have offset the struggles of OPEC to boost its output. Indeed, despite steady modest increases to its overall quota, OPEC supply growth stalled out in April and May before sharply contracting in June (Chart 3).

Chart 2 shows the total demand and total supply of crude oil in 1,000 b/d starting from January 2021 until June 2022. Total crude oil demand surpassed total crude oil supply from May 2021 until February 2022. From February 2022 until May 2022, total supply has surpassed total demand.  Chart 3 shows the million barrels per day change in crude oil supply for both OPEC and Non-OPEC countries from January 2022 to June 2022. OPEC crude oil supply is shown to be slowing and even shows a decrease in supply in June. Non-OPEC crude supply fell sharply in April but is starting to increase production in May and June. 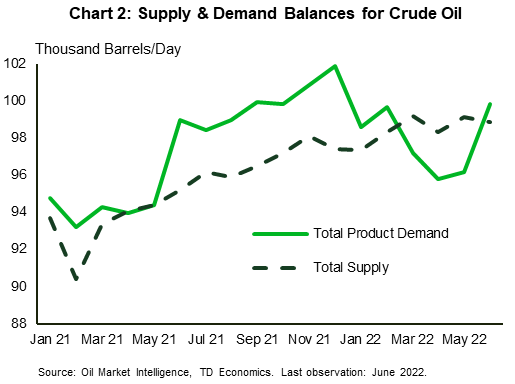 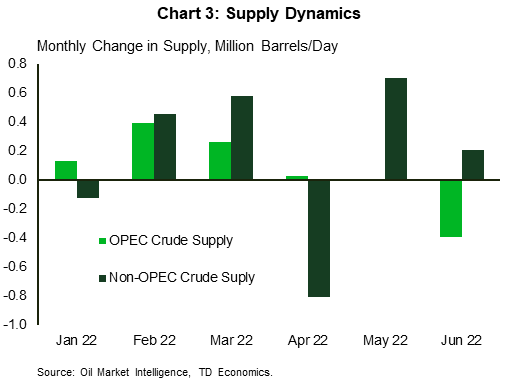 While prices could head even lower in the coming weeks on a further flareup in global recession concerns, we suspect that much of the bad news is already priced into the market. Key support over the near term will continue to be provided by a fundamental backdrop that shows some signs of bending but not breaking. Accordingly, prices could bobble within a wide range, but are expected to average more than US$100 per barrel through the third quarter.

Consumption appears likely to underperform the latest expectations, notably those imbedded in the June short-term energy outlooks of both the EIA and IEA.  Since June, economic forecasts for the U.S. and other industrialized economies have been further ratcheted down. For example, the EIA had assumed global oil demand would come in roughly 1% y/y on average in the second half of this year.  These gains would now appear toppish, especially given demand destruction from the past price spike. A profile whereby consumption effectively flatlines looks more likely over the remainder of this year.

Yet, supply too is also showing significant downside risk relative to previous expectations. In its forecast, the EIA anticipated y/y output growth to hold in the 3.5%-4.5% range through year-end. Yet, headwinds on that side are also mounting.

Greater downside risk to prices is in 2023

The greater potential for an oil price undershoot is not so much over the next few months, but in 2023. For example, the EIA’s price forecast of nearly $100 next year imbeds the assumption that global growth would run at a healthy 3.4% next year. That is 0.7 ppts stronger than our June baseline view of 2.7%, which now could be on the high side given growing storm clouds around the U.S. consumer as well as the overall Euro Area economy. Indeed, in a report we released last week we provided our two cents on how a U.S. recession might unfold if we’re wrong and downside risks to our baseline materialize. We would expect a peak-to-trough GDP decline of roughly 1.7% and a 1.5 ppt jump in the unemployment rate, which would qualify as a relatively mild downturn. This scenario would be consistent with a global growth forecast closer to 2%, which is close to stall speed for a world that typically grows in the 3-4% range.

This alternative scenario would imply a much weaker demand profile. Even under a conservative assumption where global oil demand only increases by half the amount assumed by the EIA in 2023, that would suggest a cumulative build in global inventories of over 600M barrels next year, which would bring the stock of inventory back to a level not seen since November 2020 when oil was around US$40 per barrel.

There will likely remain offsetting upside forces on prices given ongoing geopolitical risks. But even factoring those in, this alternative recessionary outcome would be consistent with prices no higher than US$70-$75. That oil price profile – alongside a prompt softening in labor market conditions globally – would likely drive a hastier retreat back to a lower inflation environment.