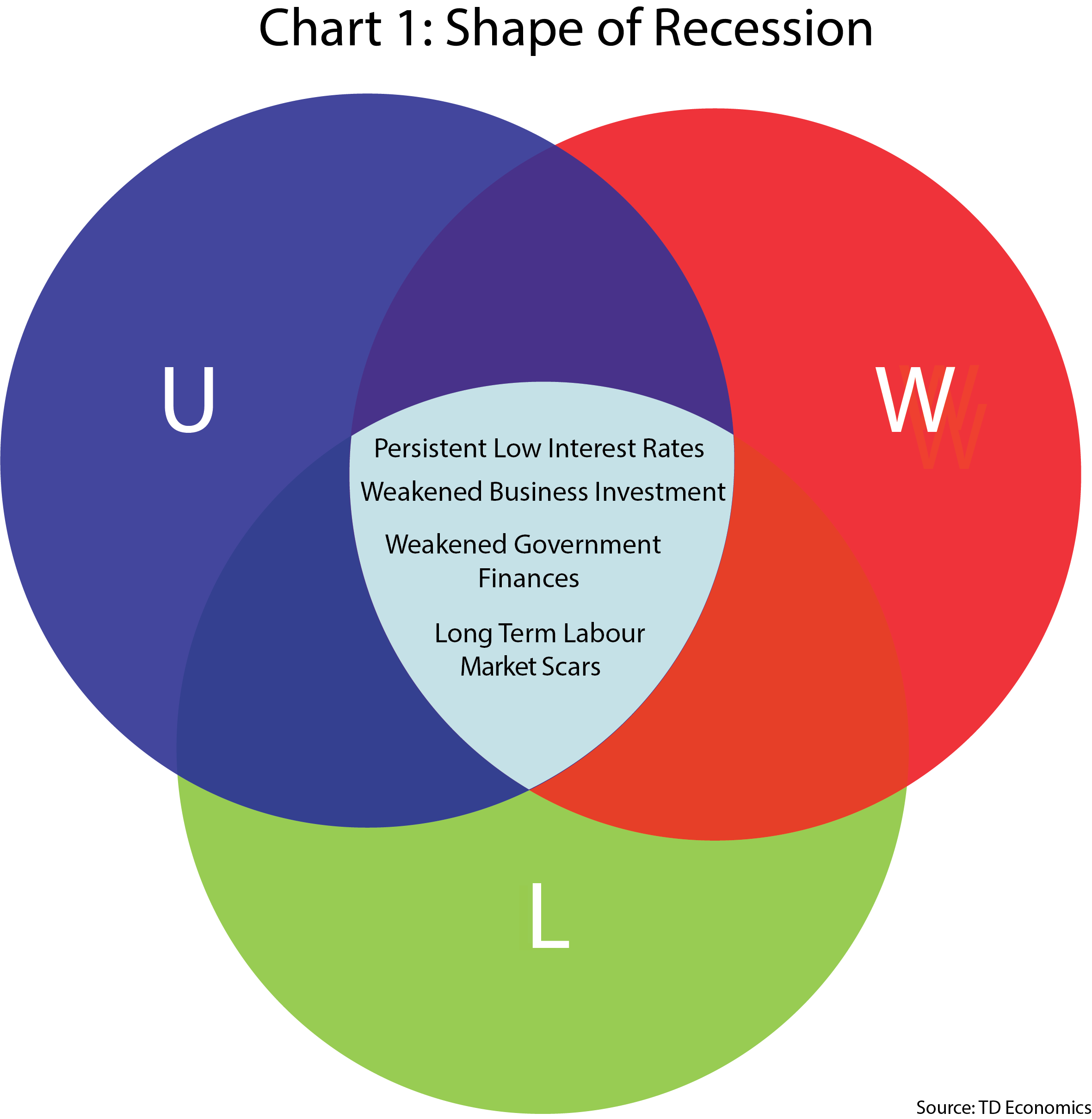 During this period, many sacrifices are being made by Canadians in a gallant attempt to save lives among the most vulnerable to COVID-19. Among those sacrifices are jobs and business operations, some of which will fail to return or carry long lasting scars relative to the duration of the economic shock.

One of the more difficult questions asked by clients is on the potential for lingering effects. This answer crucially depends on a series of events related to the virus and government decisions, detailed in a previous report. However, by using the thought-framework of a Venn diagram (remember those from grade school!), we can depict overlapping outcomes regardless of whether this cycle forms into a L, U or W shape (Chart 1). A V-shaped cycle is excluded from this diagram, as this is improbable given the gradual re-opening approach by governments and the likely persistence of cautious consumer behaviors in the absence of a vaccine or an effective treatment plan to reduce mortality rates. The three key overlapping features of any-shaped economic scenario are:

In this report, we only explore labour market dynamics and its future implications. The current crisis has destroyed three million jobs in just two short months. This is seven times the global financial crisis. Few industries have been spared, but some have weathered the downturn better than others (Chart 2).

However, the burden of the job losses is not shared evenly when we break down the data by age groups. The youngest and least-experienced workers are the most vulnerable during economic downturns, and this has proven true once again. In fact, their outcomes have been even worse than prior recessions. Young people between 15 to 24 years of age are overrepresented in industries and occupations that have been the hardest hit by work stoppages (Chart 3). According to the 2016 Census, more than half of the people in this age group were employed in sales and service jobs, which made up just under half of the jobs lost in March and April. On the other end of the spectrum, very few young people are employed in management occupations, which shed very few jobs (2%) over the past two months. As a result, while representing just 14% of the Canadian population, this age group has represented almost 30% of the jobs lost over the past two months. 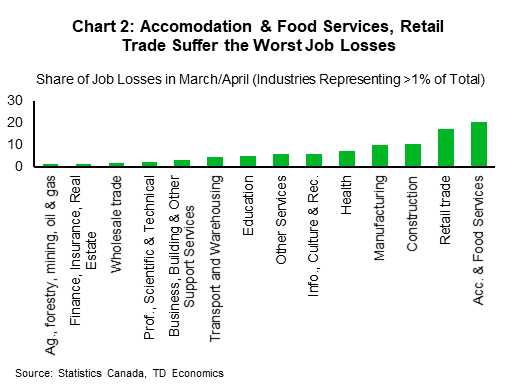 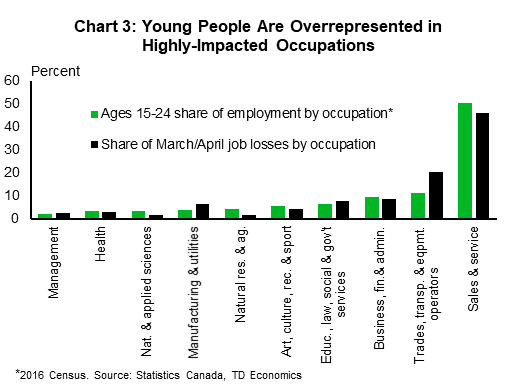 The higher representation within part-time employment is also part of the story. Over the past two months, two-thirds of the jobs lost among the 15 to 24 year old group were part time positions.

This might lead some to be quick to dismiss this as a group of individuals who can fall back on other means of income support (like family) or have a primary focus in other areas (like education). However, the sheer scale of job losses is like nothing before. The employment to population ratio for these younger workers has fallen by an astonishing 20 percentage points, compared to a drop of six percentage points during the global financial crisis. They have also borne a loss of full-time positions tallying 328 thousand, which is no small potatoes and is literally off the charts. And, this only describes the here and now.

We’re taking the time to point this out because past recession cycles have shown that young people often bear long lasting scars on their livelihood. This forms in more than one way. For instance, there is such a thing as ‘luck in timing’. Entering the workforce during a period of weak labour demand coincides with reduced earning potential, which can persist for a decade or more relative to those who benefited from stronger market forces at the point of their entry. A study of Canadian data from the 1980s and 1990s recessions showed that young people graduating into a recession had earnings that averaged over 10% less than cohorts who had graduated when the unemployment rate was lower. Even worse, the gap remained in place for up to decade and lifetime earnings were estimated to be roughly 5% lower than their luckier colleagues.1

The reason for the lower lifetime earnings is not hard to guess. Many new entrants will find themselves in a position of having to ‘trade down’ to a lower skilled job relative to their education. The ability to ‘catch-up’ often involves a higher frequency of switching jobs. In turn, this offers less stability on building a pension and benefits. This slower climb up the occupational ladder can filter into many aspects of life, such as taking a longer period to free oneself of student debt and delaying homeownership and even families. Tragically, it has also been shown to have an impact on life expectancy itself, with increased mortality rates among people starting their careers in economic downturns.2 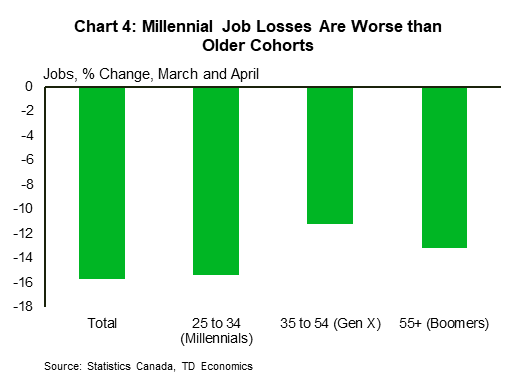 And what of other age cohorts? The next one that is top of mind is the millennial generation, which we more simply defined here as those aged between 25 and 35 years. Employment among these folks has fallen by over 650 thousand in the past two months (15%). While not outsized relative to their presence in the job market, this is still a bigger decline than older age groups (Chart 4).

The reason the millennial group is important to watch is for the simple fact that they comprise a high share of debt relative to generations that came before them (Chart 5). This is largely comprised of mortgage debt, but not exclusively (Chart 6). The degree to which jobs fail to return for these individuals could be scarring on their livelihoods for years to come. For many of these homebuyers who have made purchases in the last few years, the level of equity built up will be relatively small, making them more susceptible to changes in home prices. Even in the event that jobs return for the vast majority (which we expect), this generation will have less ‘pricing power’ on wages relative to before the health crisis. We estimate labour market slack will persist through the end of next year, and that’s in one of the more optimistic scenarios that we face a U-shaped recovery, and not an L or double-dip (W).

The potential for a negative financial transmission shock to the broader economy due to the combination of high debt and reduced earning potential appears larger within this age group than in past economic cycles. 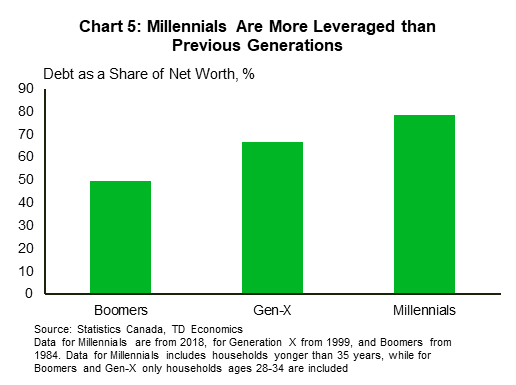 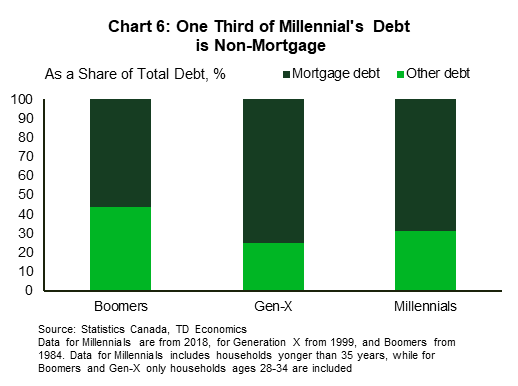 This all paints a worrisome picture, but we remind our readers that the March and April data should prove the depth of the job losses. What matters from here is the rate at which these jobs are recovered to guide the health and depth of this recovery. We also encourage policymakers to keep in mind that the recovery phase may again require tactical measures, potentially well into next year if the current near-term economic hardships are enduring. This is especially true for young people for whom the pain has been deepest, and the scars tend to last the longest.