American-style Inflation in Canada?
Keep Calm and Carry On 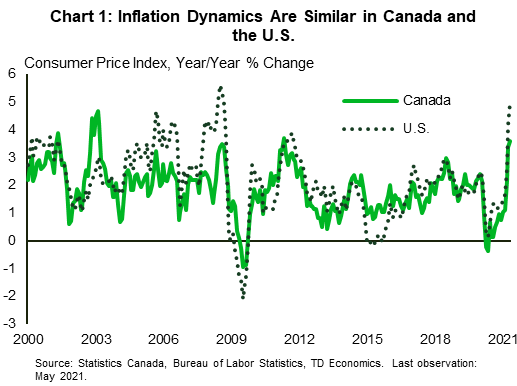 An end to the COVID-19 pandemic is finally in sight. Governments are lifting public health measures as large swathes of the population get vaccinated. Consumers are heading out to patios, booking vacations, and engaging in social activities that have been restricted to them for over a year. While this rebound in demand signals an acceleration in the economic recovery, it is also stoking inflationary fears for the first time in many years.

Indeed, inflation is picking up in both Canada and the U.S. (Chart 1). After collapsing in early 2020 due to a pandemic-induced drop in demand, price growth steadily increased through the second half of last year, before sharply rising in 2021. Typically, inflation follows similar dynamics north and south of the border with little deviation. While prices have risen faster in both countries this year, the discrepancy has widened recently with inflation reaching 5% year-over-year in the U.S. compared to 3.6% north of the border as of May. This has raised the question of whether Canada is bound to see inflation quicken in the coming months. 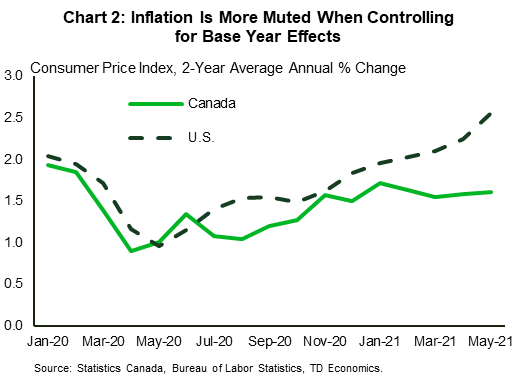 To answer this question, we must first get a more accurate reading of price growth. Since inflation is typically calculated on a year-over-year basis, the depressed nature of price levels a year ago overstate current actual price pressures. One way to look through these base year effects is to calculate 2-year annual average inflation rates. That is, the average annual gain in prices over a 2-year period (Chart 2). Calculated this way, inflation readings are much lower in Canada and the U.S., with the former seeing 1.6% price growth in May, and the latter seeing a 2.6% gain. Notably, on a 2-year basis, inflation in Canada has stabilized since January, but it has continued to pick up in the U.S.

Earlier reopening combined with strains to the supply chain are contributing to the growing disparity in inflation north and south of the border. States have gradually loosened restrictions since December last year, while provinces tightened public health measures due to the second wave of the virus. This allowed consumer demand to recover more rapidly stateside and is reflected in a faster rise in apparel, recreation, and transportation prices (Chart 3A; Chart 3B). In fact, recreation costs are up 1.5% since December in the U.S. but are down 2.2% in Canada. 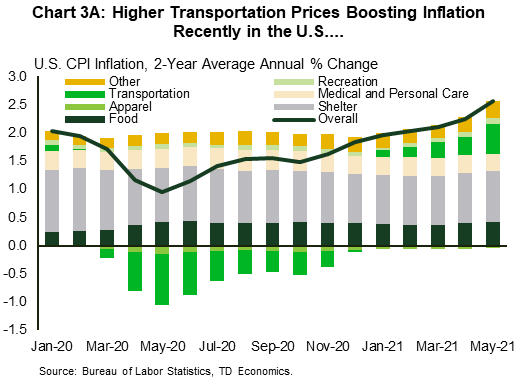 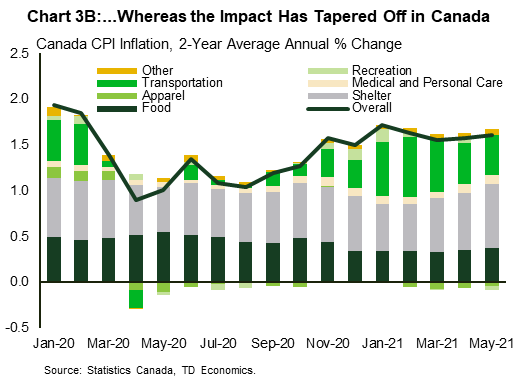 The main action, however, is in the transportation category. The component makes up about 20% of the Canadian consumption basket and 17% of the American one. It has driven inflation dynamics over the past few months, by making above average contributions to U.S. inflation while normalizing in Canada. Higher oil prices pushed up transportation costs early on in the year, but as gas prices levelled off in April and May, it translated to a moderation in inflation in Canada (Chart 4).

Conversely, a strong resurgence in consumer demand combined with semiconductor supply shortages sent vehicle prices skyrocketing in America. Specifically, used vehicle prices increased a whopping 18% since the beginning of the year and, alone, accounted for a third of the increase in headline inflation in May. Vehicle prices have also risen in Canada, but not nearly to the same extent as the U.S., due in part to ongoing health restrictions holding back consumer demand.

Another aspect that is mitigating inflationary pressures north of the border is the strong Canadian dollar. From January to May, the dollar appreciated by a little over 5% against the greenback, helping stabilize import prices (Chart 5). Meanwhile, import costs have continued to pick up in the U.S. reflecting to some extent higher commodity prices and past weakness in the U.S. dollar. 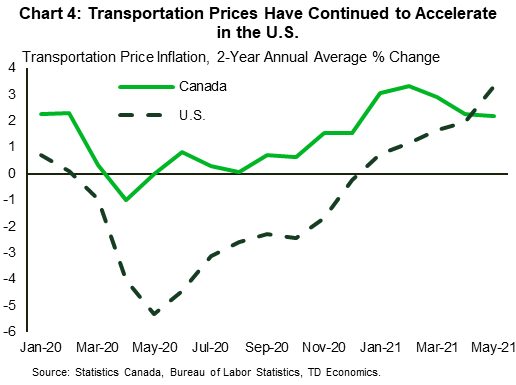 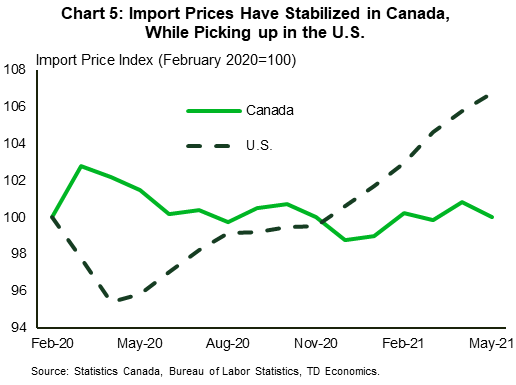 A question is raised whether higher U.S. inflation is partly a function of differences in consumption baskets and respective weightings.  However, we do not find this to the case at present.  In fact, if Canadian weights were applied to the U.S. CPI basket, overall inflation would have been 0.8ppt higher in May, widening the inflation gap. This is because of slightly larger weighting on transportation and household furnishing items in Canada’s consumption basket, in which prices have grown quickly in America

Canada Could See Inflation Rise, But U.S. To Remain Ahead

As provinces further reopen their economies, inflation should pick up in Canada, narrowing the gap with that of the U.S. (Chart 6). Part of that reduction reflects our view that the U.S. headline CPI rate in year-over-year terms has already likely peaked. In contrast, we don’t expect Canada’s rate to hit a high-water mark until the fall of this year. 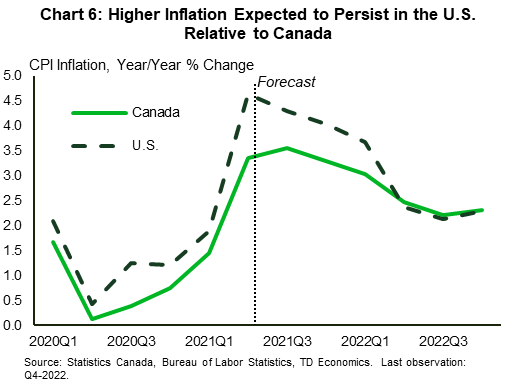 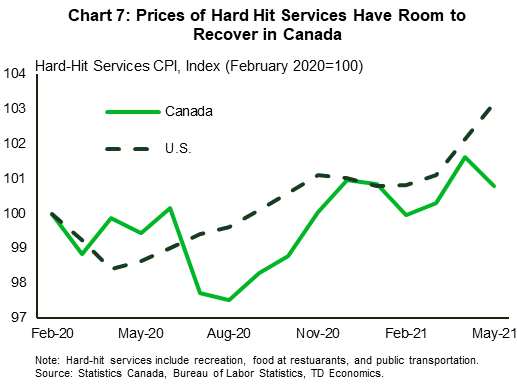 According to reports, the semiconductor shortage will persist at least until the end of the year, suggesting that a similar rebound in automobile demand will result in higher vehicle prices in Canada. In addition, services prices, especially that of hard-hit services (i.e. recreation, food at restaurants, and public transportation), have room to recover (Chart 7). The expected rebound in spending in these categories will lift inflation going forward. If prices reach U.S. levels, it could add about 0.5 percentage points to headline inflation.

Still, Chart 6 shows a sustained gap between inflation trends. There are a few reasons to expect this:

1) Stronger Economic Recovery in the U.S.

Economic activity is swiftly bouncing back in the U.S. with GDP slated to rise 7.4% on a Q4 over Q4 basis in 2021 compared to Canada’s 5.3%. We expect the U.S. economy to close the output gap by the third quarter of 2021, whereas Canada’s is anticipated to only close in the second quarter of 2022, leading to persistently higher inflation stateside over the next several quarters.

2) Labour Shortages Less of An Issue in Canada

The labour market has tightened considerably down south resulting in substantial wage pressures in some sectors. Specifically, over the course of this year, wages in the leisure and hospitality industry have increased by an average monthly pace of 13% annualized, nearly five times higher than historical norms. In fact, of the 13 major industries, wages were rising at an above average rate in 8 of them. While these increases could taper off as more Americans enter the labour force, it could still lead to steeper inflation in the U.S. in the near term, especially as wage pressures have not been as significant in Canada thus far. This is not to say Canada is immune to such shocks. Labour shortages could occur as provinces continue to lift restrictions, but greater labour force participation and less health concerns suggest more modest outcomes north of the border.

Although the Canadian dollar has depreciated a bit recently, we expect this to turn around as investor risk appetite bounces back and growth expectations firm. A strong Canadian dollar will continue to ease the inflationary impact of import prices and help sustain the wedge between price growth in Canada and the U.S.

Inflation has been the topic du jour in recent months.  Reopening and supply constraints have led to rapid price increases in the U.S. raising concerns that Canada is bound to a similar fate. Price pressures will certainly rise in the north as restrictions are lifted but reaching U.S. levels is unlikely. Over a longer horizon, as transitory impacts fade, we expect inflation in both countries to moderate and to fully converge.