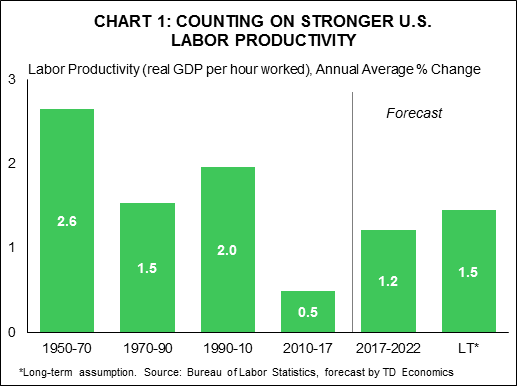 It’s sometimes a hard sell for economists at client meetings to describe the long term forecast of the American economy as no better than 2%. How can this be? Corporate tax rates have been slashed, productivity is rising and the government has never primed the pump more during an all-out economic expansion. Yet, the consensus for economic growth over 2020 to 2022 averages just 1.8%. Further confirmation came from the CBO last week following their analysis of fiscal measures that placed GDP projections within the 1.5-1.8% range from 2020-2028. This is because fiscal policies have yet to change the arithmetic that anchors U.S. growth prospects. I often refer to this as the DNA of an economy – its inherent structure.

Yes, productivity is improving and expected to continue to do so. In fact, our forecast embeds a growth rate that is at least double that of the past five years (Chart 1). So when people ask us if advances in the digital economy are represented in the forecast, the answer is YES. In fact, we are desperately counting on a persistence of stronger productivity growth, otherwise the economic tendency ends up within a more meagre range of 1% to 1.5%. Of course, there is always the potential for productivity to surprise to the upside on our expectation. However, in order to push GDP to 3% and, more importantly, sustain it there, productivity would have to perform similar to the 1950-1970 period. These were different times, embodying a sharp ramp-up in the labor force’s educational attainment coupled with meaningful advances in the quality of life. For more details, see our report here. 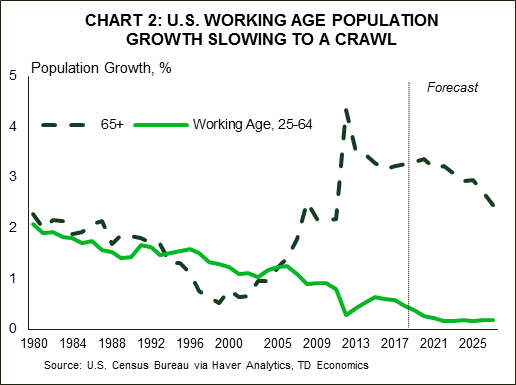 There are two elements to this economic chromosome, and each is just as important as the other. Fiscal policy has not addressed the realities of demographics and its impact on the labor force. Many of our readers are well aware that the U.S. is faced with an aging population, just like most advanced economies in the world. But, what’s less appreciated is the speed at which this is occurring.

The resident population aged 65 years and older is expanding at a rate of more than 3%, and will continue to do so into the next decade. Meanwhile, the working aged population of 25-64 year olds is growing at an annual rate of just 0.6%. Not more than a decade ago it was twice that (Chart 2). This demographic time bomb progressively worsens as the years roll forward. Growth of the working age population will be cut by two-thirds to a barely perceptible 0.16% by 2022, where it will largely stay until 2027.

Options On The Table

Tapping Into Your Backyard Potential