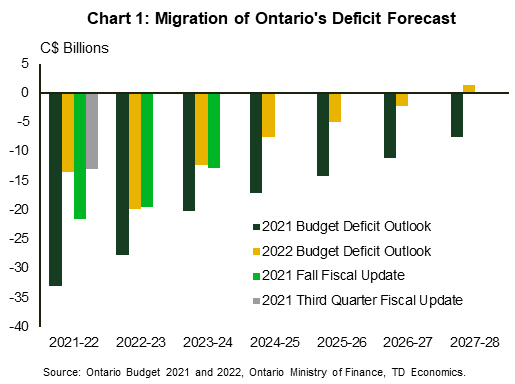 In what has become par for the course in this year’s provincial budget season, Ontario’s fiscal picture has benefitted from a far more favourable economic backdrop than anticipated. In this pre-election document, the government is using a chunk of the improved fiscal space to allocate relief to households through tax cuts and fee reductions, while also ramping up spending for its priorities.  Still, new spending (both program and capital) stole much of the spotlight.  Note that if the government had held base spending at levels projected in the fall fiscal update, the firmer economic backdrop (and associated higher levels of own-source revenue) would have yielded $12 billion in lower cumulative shortfalls over the next few years.

Many of the measures in the budget were announced well ahead of time and include notable new outlays for health and long-term care (for the St. Joseph’s Healthcare Centre, for example) and funding for the transition towards electric vehicles. In addition, details of the government’s new daycare agreement with the federal government have been more fully fleshed out, with Ontario expecting to receive $13.2 billion in annual funding from the feds to implement the program. Studies indicate that Ontario had the second highest average childcare costs in recent years, so this policy could offer significant relief for a subset of households in the province.

On the revenue side, the already-distributed rebates for vehicle registration fees, and their proposed cancellation moving forward, count as marquee measures in Budget 2022, as does the pledge to temporarily cut gasoline and fuel taxes in beginning in the middle of the summer driving season. Also making headlines is the government’s plan to lift the eligibility threshold for the Low-Income Individuals and Families (LIFT) tax credit and the new Ontario Seniors Care at Home Tax Credit. All told, the 3-year price tag of the slew of new tax relief measures is $2.2 billion.

At $13.5 billion (or 1.4% of GDP), the FY 2021/22 deficit is expected to be slightly higher than what was projected in February’s third quarter fiscal update, on the back of lower revenues. However, note that Ontario’s FY 2021/22 deficit projection has been marked down 2 times since last year’s budget. Indeed, at this time last year, Ontario was bracing for a $33.1 billion shortfall in FY 2021/22 and was projecting a $21.5 billion hole at the time of the fall update last November. 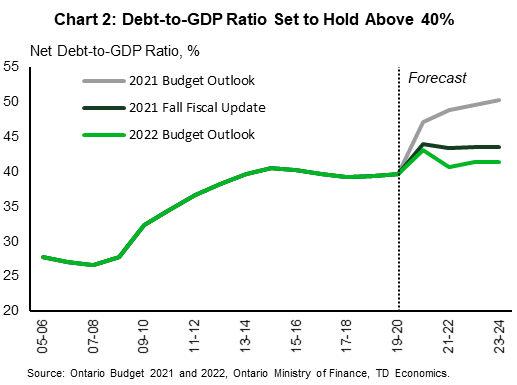 As has been the case in all other provinces, revenue growth last year was helped by the much-improved economic backdrop. Indeed, nominal GDP in Ontario soared 12% last year, marking the fastest gain since 1982. Moving forward, growth in nominal GDP (the best measure of the province’s tax base) expected to remain solid at 6.7% this year and average of 4.5% over the next few years.  In level terms, nominal GDP is forecast to be 3% higher by 2024 versus their most recent medium-term projection in their fall fiscal update.

The government’s real GDP forecasts are a touch softer than ours through 2023. Meanwhile, their nominal GDP forecasts are a more meaningful 0.7 ppts lower, on average. However, the government is being purposely careful in their economic planning by considering projections that are below the consensus. Using the government’s elasticities, our projections would imply that revenues could come in about $1.2 billion higher in FY 2022/23 than what policymakers are forecasting.
Reflecting the uncertainty amid the Russian-Ukraine conflict among other variables, the government has maintained its recent practice of showing a few alternative economic scenarios and in their budgeting projections. Nominal GDP growth averages 6.3% in the faster growth scenario and 4.3% in the slower growth projection, from 2022-2025.

Supported by their expectation of outsized GDP gains (which help offset the negative effects from tax relief measures), revenues are projected to expand by an average of 4.3% over the next five years, slightly above the 3.8% rate averaged since the 2008/09 Global Financial Crisis (GFC). Federal transfers are also expected to add significantly to the province’s coffers, as federal dollars flow to the province for the new federal-provincial daycare agreement.

Notably, land transfer taxes added about $6 billion to the province’s bottom line in FY 2021/22, up 53% from the year prior. However, given the probability of falling home sales and prices for the remainder of the year, there may be downside risk, even with the government projecting no growth from this source in FY 2022/23.

Some offset to the upgraded revenue picture on the government’s bottom line will come through higher debt service charges, as interest rates increase. Accordingly, average annual borrowing rates on Ontario’s debt are forecast to rise from 2.1% in FY 2021/22 to 4.1% by FY 2024/25, while debt servicing charges climb from $13 billion to $14.9 billon over the same time. However, the average term of the province’s debt portfolio remains lengthy, at 10.9 years, thus providing some offset. And, expectations for strong GDP growth means that these charges as a share of revenues remain well below historical peaks in the government’s projection.

Overall spending takes somewhat of a hit from significantly reduced COVID-19 support programs in FY 2022/23; however base spending is still projected to advance at a hefty 10% pace, pushing total spending higher. After this fiscal year, total spending is slated to increase by an average of 1.1% through FY 2024/25 – well below the 3.4% pace averaged since the GFC. Health care spending sees a big boost in FY 2022/23, but it’s education spending that is set to record faster growth over the next several years bolstered by the childcare rollout.

With tax relief measures weighing on revenues and base spending set to climb significantly, the deficit is projected to widen to $19.9 billion in FY 2022/23. After which, it is forecast to gradually fall as spending growth slows markedly.

In FY 2021/22, Ontario’s net debt-to-GDP ratio was 40.7%, which was in line with the estimate in the third quarter fiscal update but down sharply from the 48.8% figure projected in last year’s budget. However, Ontario still sits on the higher end in this metric compared to other provinces.

Unfortunately, this ratio is set to drift higher over the medium-term as the government’s debt level is pressured higher by capital investment. For this fiscal year, total infrastructure spending is forecast to climb by 18%, which should support construction activity and overall GDP. It also falls in line with the early-year survey on public and private spending intentions, which forecast a 14% gain in public sector construction spending in 2022.

The fiscal turnaround in Ontario since the early days of the lockdown has been rapid, with help from a surprising sharp V-shaped growth recovery and accelerating inflation.  While the government has spread out the benefits of the growth dividend across spending, tax relief and deficit reduction, we would have preferred to see a greater allocation towards the third objective (i.e., fiscal improvement).  A continued high debt ratio of more than 40% of GDP in Ontario increases the province’s vulnerability to an unexpected economic setback in the coming years. That being said, the budget’s economic assumptions are on the conservative side, helping to buffer some of the risk.

In terms of the measures themselves, our reaction is also mixed.  On the plus side, the new affordable daycare agreement – which commits to creating 86,000 new spaces by the end of the 6-year deal – could bring positive longer-term economic benefits to the province in terms of higher labour force participation and, ultimately, potential GDP.   This assumes potential obstacles, such as ensuring adequate staffing, can be overcome.   Other bigger-ticket items should also help to address some of the province’s more acute challenges, including new investments in health care and infrastructure.

Other flagship measures in this budget will not only do little to support longer-term living standards but could come at the cost of unintended consequences.  Case in point, the temporary gas tax relief probably won’t do much to support the longer-term transition towards cleaner energy.  Moreover, relief and fee rebate measures risk adding another tailwind to inflationary pressures and interest rates in Canada despite their lauded objective to make life more affordable for residents.  Governments and the central bank should be rowing in the same direction, but the 2022 government budget season argues otherwise