In Budget 2021, Newfoundland and Labrador’s government outlines a multi-year plan that sees its sizeable deficit substantially reduced by FY 2025/26. Much of this improvement is slated to come this fiscal year, as revenues surge from levels that were depressed by the pandemic and low oil prices. However, after this fiscal year - when economic growth is projected to taper off and the impact of tax hikes on revenue growth wanes - the province will be leaning on considerable expenditure restraint to put its fiscal house in order.

In FY 2020/21, the Province’s deficit was $1.6 billion, about $195 million below what was expected in last year’s budget. This improvement came courtesy of lower-than-anticipated expenditures, as revenue also fell below expectations. Still, Newfoundland and Labrador’s shortfall was 2nd highest among provinces at 5.2% of GDP, trailing only Alberta (6.6%).

[ Per cent change unless otherwise noted ]

Soaring revenues are anticipated in FY 2021/22, driven primarily by surging offshore royalties as Brent prices are forecast to average US$64 per barrel, up significantly from last year’s average of  US$41.76. Government of Canada transfers are also expected to grow strongly, while own-source revenues are boosted by expectations of a substantial recovery in economic activity. On the latter front, nominal GDP is projected to grow by 16.2% in 2021, more-than-offsetting the 10.9% drop in 2020.  That projection is higher than our 12.2% growth forecast released in March, but partly reflects more up-to-date oil forecasts.

Revenue growth is anticipated to pull-back somewhat in FY 2022/23. After which, revenues are expected to average a 2.0% gain through FY 2025/26, restrained by weak population growth.

In Budget 2021, the government plans on adjusting tax brackets for higher income earners (i.e. those earning more than $135,973), such that income tax rates climb by 3 – 4 ppts for the highest earners. This change would take the combined federal/provincial PIT rate for the highest earners to 54.8% from 51.3%. It is also anticipated to bring in $15.3 million in revenues this fiscal year, although will still leave the province on the lower end of the income tax spectrum versus the other Atlantic Provinces. The government is also evaluating potential HST increases.

Tobacco taxes will be increased again this year, to the tune of 3 cents per cigarette. Meanwhile, a 20-cent-per-litre sweetened beverage tax will become effective next April. On the other hand, the province plans to offer rebates of up to $2,500 towards green home retrofits and for residents who purchase an electric vehicle. In addition, they will rollout at Physical Activity Tax Credit worth up to $2,000 per family. 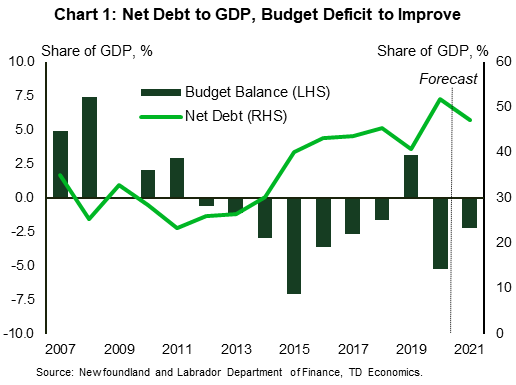 Spending is forecast to continue increasing at a solid rate in FY 2021/22, driven by gains in social spending and resource sector expenditures. However, substantial expenditure restraint is baked into the government’s plans thereafter, as spending falls 9% in FY 2022/23, and averages a 0.2% drop from FY 2023/24 to 2025/26.

Overall, expenses are anticipated to be about 10% lower than their FY 2021/22 level by the end of the projection horizon. This implies a significant decline in real spending, as consumer prices are expected to have climbed by 7.4% over that same time.

To achieve spending efficiencies, the government will begin an immediate analysis and reorganization of Nalcor Energy – the provincial organization tasked with developing the Lower Churchill Hydroelectric projects. Their efforts won’t stop there, however, as all crown corporations and organizations will be reviewed in the search for efficiencies through realignments. For example, the Province plans an integrated services model to streamline back-office operations, and prevent duplication, for its four regional health authorities.

Notable spending pledges in Budget 2021 include $147 million for communities to improve infrastructure and enhance services, $74 million for early childhood development programs, $30 million towards tourism support, and $25 million to improve cellular and broad-band connectivity. Regarding COVID-19, the government will continue allocating the $100 million it set aside for support.

In FY 2021/22, the province is projecting its net debt-to-GDP ratio to drop to 47% from 52% the year prior, despite a projected $600 million investment in infrastructure. If achieved, this would mark a considerable improvement for Newfoundland and Labrador, placing it below Ontario (which would take the mantle as the most indebted province) for the first time since FY 2015/16. Although no longer-term debt projections are offered, the significant deficit reductions planned by the government would be key to sending the ratio down on a sustainable basis.

In what will likely be well received by investors and rating agencies, Budget 2021 commits to significantly improving Newfoundland and Labrador’s fiscal position in coming years. Still, much of this heavy lifting will come on the back of spending cuts, as the hefty revenue increase expected in FY 2021/22 fades away and structural challenges like slow population growth impede further gains. This level of restraint will also require considerable discipline on the part of policymakers, particularly in the face of challenges such as a relatively old, and aging, population.