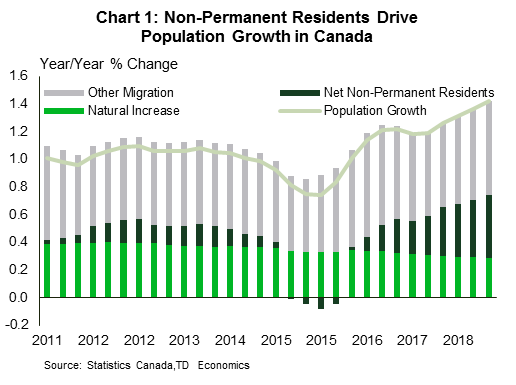 Slowing population growth is a common phenomenon observed across many advanced economies. But in recent years, Canada has diverged from its peers with population growth accelerating sharply.  In 2018, the growth in overall headcount in this country reached 1.4%, the fastest rate in 28 years. It was also the highest among G-10 nations, where growth last year averaged 0.5%.

The key factors likely boosting population inflow over the past couple of years are changes to Canada’s immigration program, which favours younger and higher skilled immigrants, and increasing recruitment efforts by Canadian post-secondary institutions.  However, the rise of international students in Canada is a longer running trend. For some time, Canada has been a destination of choice for international students for reasons such as the favourable mix of quality and affordability of post-secondary education among other factors.

To the extent that these recent trends are sustained, Canada’s economy could stand to reap longer-term benefits. As more former international students are selected to stay in Canada as permanent residents, it could contribute to easing the pressures of an aging population, help address labour shortages, boost sagging productivity and increase diversity in Canada. 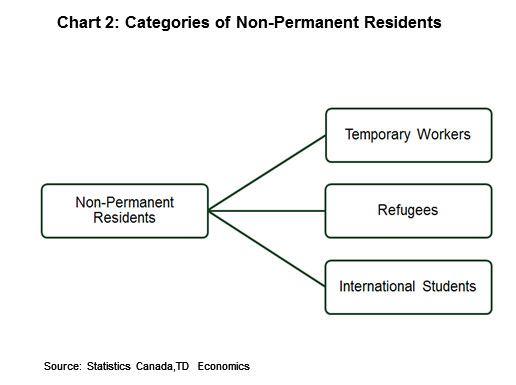 Chart 1 reveals that the category of non-permanent residents is not always a contributor to rising population.  In the first half of the decade, contributions were modest at 0.1-0.3 ppts per year, before turning negative in 2015, corresponding to the period of low oil prices.  However those declines are now a distant memory, with the share steadily increasing to a substantial 0.5 ppts in 2018.

First, temporary workers are those who have been permitted to work in Canada under two main programs: the Temporary Foreign Workers Program (TFWP) or the International Mobility Program (IMP). Applicants may also obtain work permits for other purposes, which include humanitarian and compassionate reasons.

The TFWP aims to fill gaps in the labour market that arise when there are no available Canadians to carry out responsibilities of a job. To establish this need, an employer must undergo a Labour Market Impact Assessment (LMIA). On the other hand, applicants to the IMP are not required to complete a LMIA as its purpose is to fulfill Canada’s larger economic and cultural goals. For example, the IMP serves Canada’s major trade agreements such the North American Free Trade Agreement (NAFTA) and Canada’s reciprocal exchange agreements. It also awards post-graduation work permits to eligible international student graduates which allows them to gain Canadian work experience and fill labour market needs. 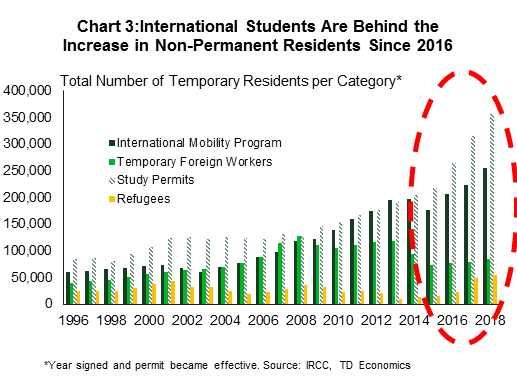 Chart 3 shows how net inflows of TFW have stacked up relative to other non-permanent residents over the past decade. (Given data limitations, we used IRCC source data to infer trends of the various components.)  The TFW category has been dropping in recent years since reaching a peak in 2013. This development can be explained by reported abuses of the program, which prompted efforts by the federal government to tighten the qualifying criteria.

Next,  refugees are those who request protection upon or after arrival to Canada. This has historically been the smallest category of non-permanent residents.
Finally, the last and largest category is international students. These are people who are permitted to study in Canada in any program of their choice.

Canada: A destination of choice for international students 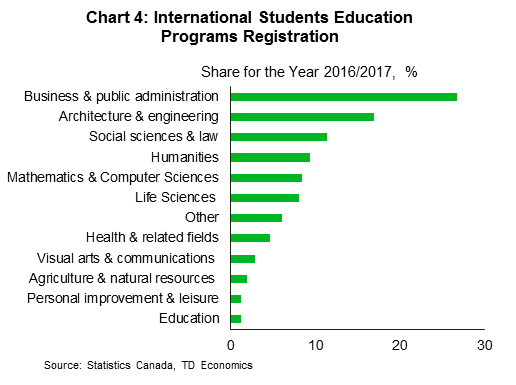 Both the rise of international students and its importance in overall population is not a new development. Canada has long been an attractive location for foreign students from around the world.  High-quality post secondary education (PSE) institutions on offer within a diverse, politically stable and safe country have represented magnetic pulls.

Above all, the economics of studying in this country has fueled foreign student interest. Canadian PSE institutions have offered competitive tuition fees compared to other international student destinations, such as the US and the UK (See table 1).  Moreover, a weaker Canadian dollar has helped to further reduce the relative cost of tuition as well as the overall cost of living for international students.1

Student inflows rise to a new level since 2016

While the trend of students coming to Canada on study permits has clearly been up over the past decade, annual net inflows over the past three years alone have surged from about 250,000 to 350,000 people. We boil down this recent surge to a combination of factors both on the demand and supply sides of the equation, led by changes to federal immigration policies that improved the job prospects for students coming to Canada.

The Express Entry system was introduced by the federal government in 2015 to improve the efficiency and the outcomes of Canada’s immigration program, as well as provide flexibility in selection and application management. In this system, applicants who meet the minimum criteria of the Federal Skilled Worker Program, the Federal Skilled Trades Program, or the Canadian Experience Class are entered into a pool, awarded points based on information in their profile and ranked by the Comprehensive Ranking System. Human capital points are awarded for: age, level of education, official languages proficiency, and Canadian work experience. Additional points are awarded for: post-secondary education in Canada, French language skills, arranged employment, having a family member in Canada, or a provincial nomination. The provincial nominations are awarded through Provincial Nominee Programs which are designed to meet regional labour market and economic development needs. Provinces have used these programs in tandem with the express entry system to increase the number of permanent residents flowing into their respective regions.

Overall, the express entry system eases the immigration process for international students as it awards additional points for a Canadian post-secondary credential. It also allows for younger and higher skilled immigrants to be fast-tracked through Canada’s immigration system and gain permanent residency in six months or less, a likely pull factor for many international students.

In November 2014, the federal government unveiled a strategic plan to promote Canada’s knowledge-based economy and attract 450,000 international students to Canada by 2022.

The strategy appears to be paying dividends, as the government has actually managed to exceed its target for international students well ahead of schedule.

3. A Rise in Federal Immigration Targets

Along with the express entry system and international education strategy, Canada also implemented an ambitious multi-year immigration plan in 2018, which may have also contributed to the rise in international students in Canada. The plan set out ambitious targets to raise the number of permanent residents accepted into Canada with the majority of spaces allocated for economic class applicants (Table 2), the category encompassing international students. Early indications suggest that the plan is already in full flow as the number of permanent residents accepted through economic programs surged in 2018. In response to this growth, the government revised up future targets in the 2018-2019 immigration outlook. 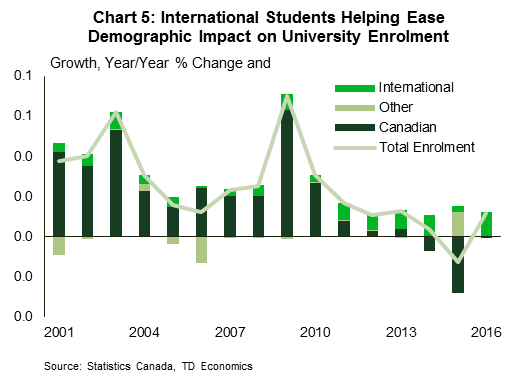 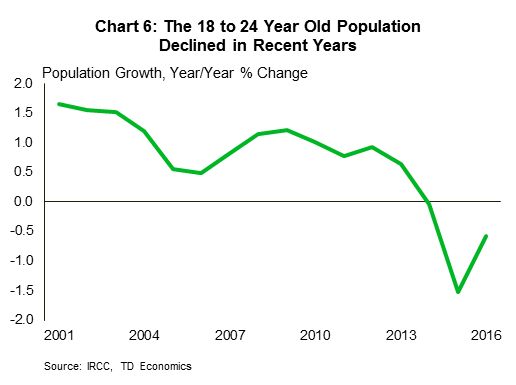 Facing declining enrolment rates and slowing revenue growth, many PSE institutions across Canada have stepped up their efforts to recruit more international students in recent years.

Following a sharp increase in 2009 (due to Statistics Canada expanding the programs covered in enrolment data), university enrolment rates have slowed considerably, driven by a decline in Canadian student enrolment (Chart 5). This was brought about by a demographic squeeze hitting the population of 18 to 24 year olds in Canada, those that typically attend PSE institutions (Chart 6). Given these developments, international students do not appear to be displacing Canadian students, but are helping fill the gap left by them. 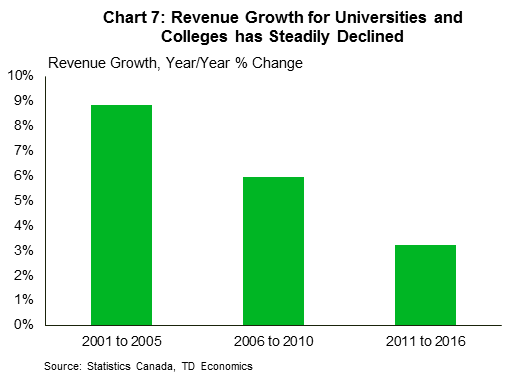 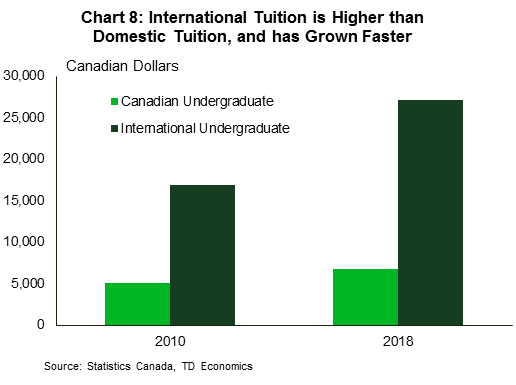 Recognizing common challenges, Canadian PSE institutions have worked together to promote Canadian education internationally. They have organized undergraduate tours for students in Latin America, India and Middle East and produced promotional material for international students.4 PSE institutions have set aside funding for international undergraduate students and many have also established satellite schools in countries around the world. 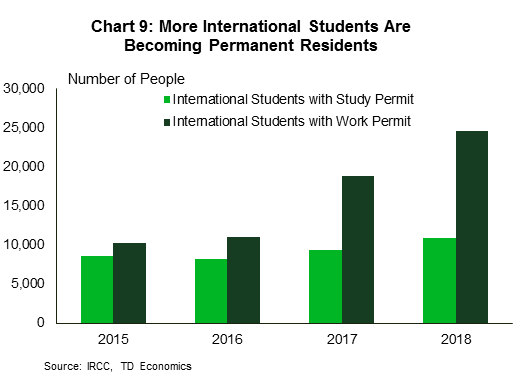 Second, as more and more international students’ transition from non-permanent resident status to permanent resident status, they support long-term prosperity of the Canadian economy. Specifically, they help ease demographic pressures, provide a potential boost to productivity and promote diversity in Canada. Indeed, recent data suggest that not only is the share of students on study permits increasing, but so too are retention rates upon completion of PSE and temporary work permits  (Chart 9).  In a 2018 survey conducted by the Canadian Bureau of International Education, around 60% of respondents stated that they intended to apply for permanent resident status in Canada, up from 51% in 2015.

As Canada’s population ages, there will be more retirees, resulting in growing labour shortages, particularly in high-skilled areas of the economy. Younger skilled migrants will be needed to help ease the demographic pressure on labour markets. International students are best placed to fill this gap as they would have attained their education in Canada, which facilitates a smooth transition into Canada’s labour market.

Productivity May Experience a Boost

International students come from all around the world, with the top five destinations being China, India, South Korea, France and Vietnam. This injects greater diversity into Canadian society, which has been shown to have a positive impact on GDP. Greater cultural diversity brings new skills and ideas to a country, promoting technological innovation, thereby boosting economic activity.6

Can Canada maintain the strength in foreign student inflows?

It is uncertain whether the recent strength in foreign student inflows can continue at this rapid pace.  Much depends on the evolution of economies and government policies. In the near term, there appears to be little blocking further strength in inflows. However, over the medium-to-longer term, governments and policies can change.

In Canada, a more pressing downside risk relates to the federal immigration targets. While the new immigration programs eased the path for international students to become permanent residents, the current immigration targets surrounding permanent residents may not be high enough to absorb the projected number of international students over the next few years.  However, the targets are not binding and the federal government has revised up the targets once already and it may do so again in the future.

It is also unclear the scope to which PSE institutions in Canada have the capacity to absorb more international students, especially when funding may be reduced in some provinces.

Since 2016, population growth in Canada has experienced a revival, reaching the highest growth rates since the early 1990s. The major driver of that growth has been inflows of international students who have chosen to study in Canada for a variety of reasons including changes to immigration programs, and recruitment efforts by post-secondary education institutions.