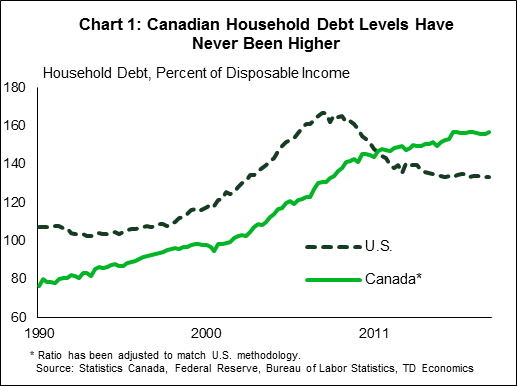 It’s been more than a decade since Canadians have seen the 1.25% increase in interest rates that has transpired over 16 months. This, coupled with high levels of household debt, has sounded alarm bells in several corners. The debt-to-income ratio of Canadian households is nearing that of the of their U.S. counterparts prior to the Great Recession (Chart 1), leaving some wondering if Canada could mirror a U.S.-style deleveraging cycle.

It’s not just the news headlines decrying Canadian households’ love affair with debt; elevated household debt levels are also on the radar of the policymakers. The Bank of Canada’s Financial System Review identifies household indebtedness as its chief economic vulnerability.

There has been some reprieve of late - the inexorable march higher in debt paused over the last few quarters. The debt-to-income ratio peaked in 2016 and has largely moved sideways since then. From the central bank’s standpoint, slowing credit growth is a welcomed development, helping to assuage concerns about a hard handing. It is also a trend we expect to continue going forward. A combination of macroprudential measures and rising interest rates should limit the ability of household credit to outstrip income growth. In turn, this will limit the advance of the debt-to-income ratio, albeit still leaving it at historically elevated levels. Even so, households will still have to contend with rising debt service costs that will ultimately restrain consumer spending and economic growth. 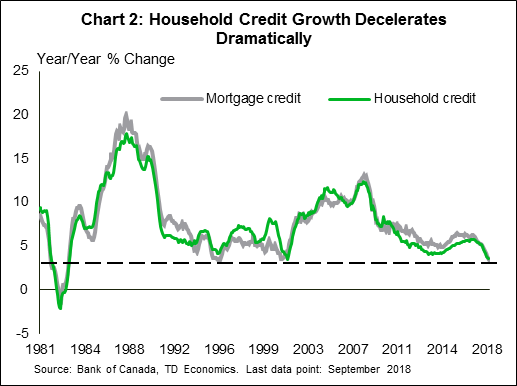 Residential mortgage credit accounts for over 70% of household credit and is the main source of debt growth. Mortgage debt outpaced consumer credit from 2010 through the first half of 2017, but has slowed dramatically over the past several months. A combination of federal and provincial macroprudential measures and an upward trajectory in borrowing rates over the past 16 months succeeded in cooling housing demand and tapping down price pressures. Some readers may find it surprising that mortgage credit is expanding at the weakest pace since the early 1980s – 3.4% year-on-year in September (the latest data available) (Chart 2).

A similar, yet less dramatic, outcome occurred within consumer credit, which encompasses lines of credit, auto loans, cards and other forms of household debt. An acceleration in growth in that category through 2017 also lost some steam in recent months, moderating to 4.2% (year-on-year) in September from 5.3% a year prior. Consequently, the key measure of household leverage – the debt-to-disposable income ratio – is down 0.6 pp relative to its year-ago level. It’s no coincidence that this too marks the first time the ratio has declined on a year-over-year basis since 2001.

Debt servicing costs on the rise 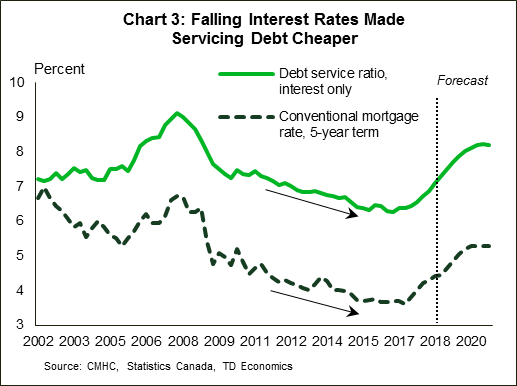 Even as credit growth slows, higher interest rates will raise the cost of servicing existing debt. This is the opposite dynamic of the past decade, when debt service costs were able to hold steady relative to income because falling interest-related costs offset increases in principal payments (Chart 3).

All in all, the effective interest rate on outstanding mortgage and consumer credit is estimated to rise by about 95 and 125 basis points, respectively, from their levels in the third quarter of 2018 through the end of 2020 (Chart 5). This forecast is consistent with expectations around central bank monetary policy, with the Bank of Canada likely to build on hikes implemented in July and October with three additional moves in 2019. Since most consumer credit products are issued at a variable rate, the effective rates on consumer credit will increase in lockstep with the benchmark rate. Meanwhile, the effective average mortgage rate will increase more gradually1. 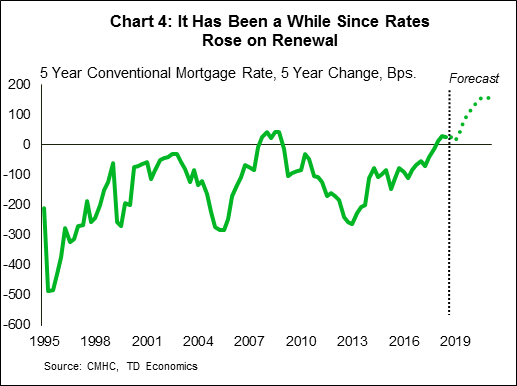 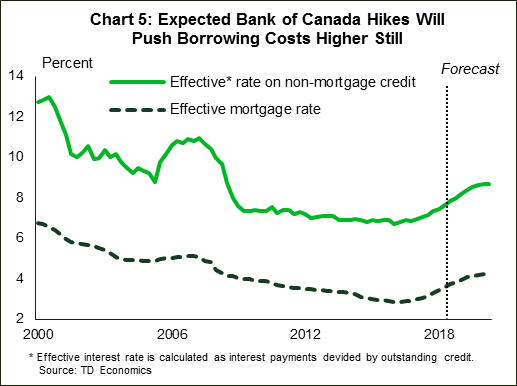 This means that total debt service costs, including interest and principal obligations, will continue to move higher, likely eclipsing 15% of disposable income by the end of 2020, which is roughly 0.20 percentage points (pp) above the previous peak in 2007 and 0.9 pp above current level (Chart 6). Specifically in terms of mortgage debt service costs, these will likely hit an all-time high going back to the early 1990s. But, unlike that period, the cost of servicing consumer debt will also be elevated, consuming 8% of income, compared to 6% in 1990s.

Things could always be better… or worse 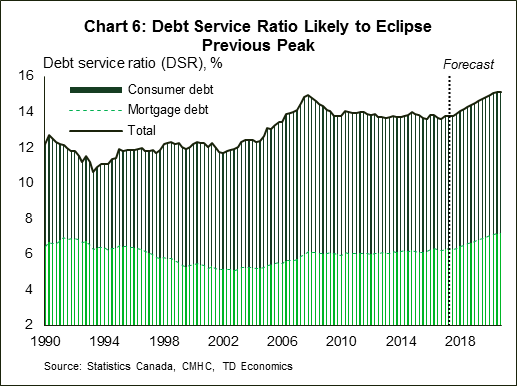 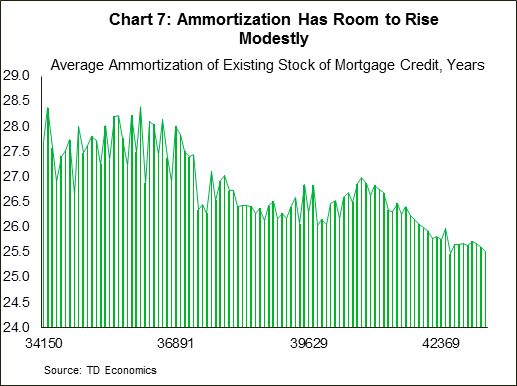 Estimating debt service costs hinges on several assumptions, and small changes can materially impact the outcome. After crunching the numbers, we calculate the average amortization period for mortgage credit is currently a little over 25 years. By comparison, it was around 27.5 years during much of 1980s and 1990s, and around 26.5 during 2000s (Chart 7). The current shorter amortization likely reflects the outcome of regulator’s policies that sought to do exactly that. The maximum amortization period allowed for government-insured mortgages, which account for a declining but still-important share of just over 40% of total outstanding mortgage credit, is currently 25 years. Prior to 2008 it had been as high as 40 years. Falling interest rates over the past decade also accelerated principal repayments.

Even with shorter limits on amortization relative to history, households still have a number of options open to them to mitigate the impact on household budgets of higher interest rates:

It is reasonable to assume that a number of households will take advantage of these options in a rising rate environment2. Accordingly, the most likely scenario for the expected path of the debt service ratio (scenario 1) assumes that the average amortization on existing debt rises by six months over the next two years (Chart 8). This is consistent with the relationship between mortgage rates, principal repayment and amortization observed over the past two decades. Empirically, the principal portion of mortgage payment tends to decline when interest rates rise, which tends to extend amortization. We have discussed ways in which this could be accomplished above. 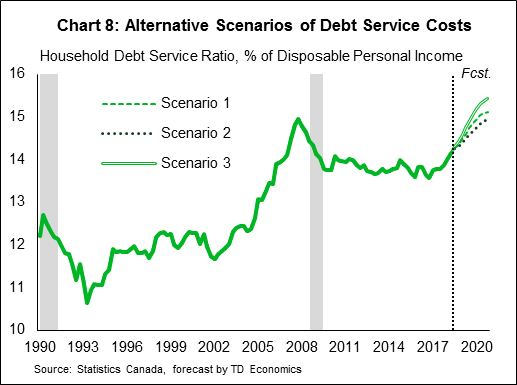 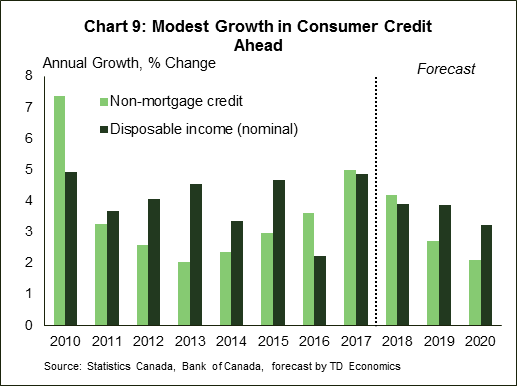 In a more benign scenario, households could extend the amortization even further, taking the average up a whole year between now and 2020 to 26.5 years. Households also have some room to temporarily mitigate higher debt service costs by slightly lowering repayment of principal on consumer credit, such as credit cards and revolving lines of credit. Jointly these changes result in a debt service ratio reached by 2020 of 14.9% instead of 15.1% (Chart 8).

On the other hand, faster credit growth would translate into higher debt service cost. Our current forecast assumes non-mortgage credit growth averages just 2.1% annually over the next two years – considerably slower than the 4.3% pace seen over the past three years and below and below our expectations for both nominal income and consumer spending gains (Chart 9). Assuming consumer credit grows in line with nominal consumer spending at around 3.4% per year over the next two years, while keeping other parameters unchanged, would raise the debt-service ratio to 15.4% by the end of 2020 (scenario 3).

No matter which scenario you look at, one thing remains in common: debt service costs will likely outpace income growth (Chart 10) over the next couple of years, squeezing consumer spending. Based on the individual average disposable income in 2015 of $56,000, rising debt service ratios mean households will need to spend about $500 more on debt servicing under Scenario 1, and $400 and $700 under the less and more severe scenarios, respectively. While those increases should be manageable for most households, they will still divert away spending on other items. Growth in real consumer spending is expected average just 1.7% per year during 2019-2021 period, a full percentage point slower than it has in the prior three years. 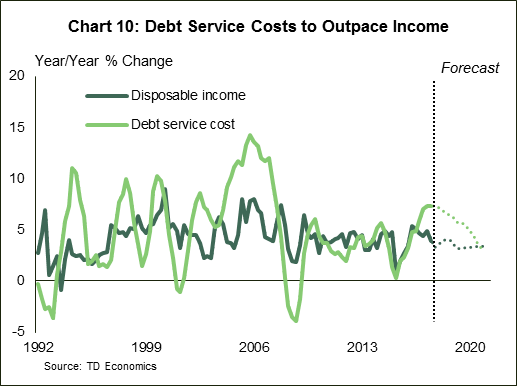 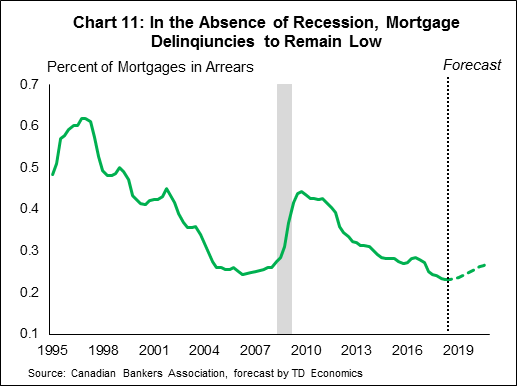 In the absence of a recession, most households should be able to weather increased debt service costs, and so far there’s little evidence that higher rates are putting pressure on households’ ability to meet their financial obligations. In fact, mortgage delinquency rates are at the lowest level since the 1990s. Insolvencies filed by consumers have edged slightly from a year ago, but remain at a level that is little different from the average that prevailed since 2011.

That being said, some households may find themselves in hot water. According to the Bank of Canada, about 8% of indebted households owe 350 per cent or more of their gross income, double the economy-wide debt-to-income ratio, which is currently at 169%. These households could see a substantial increase in financial strain. Given that they hold bit more than 20% of total household debt, this could nudge the delinquency rate higher. However, in the absence of a major economic stress that increase is expected to be modest, rising from 0.23% to 0.27% by the end of 2020 (Chart 11).

Still a vulnerability that skews BoC rate profile to the downside

In last week’s central bank rate decision – which featured a quarter point increase in the overnight rate – the Bank of Canada struck an optimistic tone around the household sector. In its Monetary Policy Report (MPR), it stated that “household sector vulnerabilities are expected to ease” and sees the household debt to income ratio embarking on a continued easing trajectory, which are views that are in line with TD Economics (we see the debt to income ratio edging back from 169% to 167% over the next few years). At the same time, the central bank is more optimistic around the near-term consumer spending outlook, projecting a baseline increase that runs 0.3-0.4 ppts faster than that of TD Economics. The variance may surround different assumptions around the debt service ratio and its spill-over to consumer and housing demand.

Suffice to say that there remains considerable uncertainty around the ultimate path of credit demand, the debt service ratio and how consumer spending responds given the historically high levels of debt relative to income. As noted in our recent Dollars and Sense, a data-dependent Bank of Canada will likely be more responsive to an undershoot of its forecast relative to Fed. With the Bank of Canada likely willing to pause to gauge direction rather than put its faith in model predictions, we see the balance of risks around our expectation for 3 hikes in 2019 to be skewed to two rather than 4 increases.