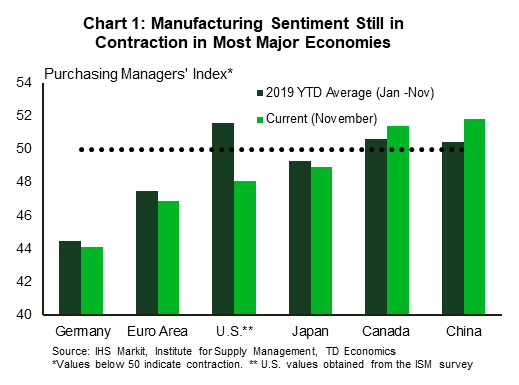 A steep downturn in global manufacturing activity has been a key story in 2019. Growing trade policy uncertainty, slowing demand in China, and a cyclical slowdown in advanced economies have all conspired against manufacturing and sent growth in world trade volumes to its lowest since the financial crisis.

Canada's manufacturing sector – whose struggles over the past few decades have been well-documented – has not been immune to these headwinds. Yet, the sector has managed to buck the trend of contraction, at least so far this year.1 Comparable data on manufacturing sentiment across major countries provide some evidence in this regard. The PMI surveys compile data across a range of indicators, including current production, new orders, inventories, and employment, with any reading above 50 consistent with expansion. At last count, Canada stood slightly above the 50 mark. This was above the readings seen in most of its major counterparts (Chart 1).2

Most indicators pointing to modest expansion

This picture of expanding activity is backed up by key factory metrics. For instance, business confidence in the sector is hovering above the all-industry average (Chart 2). Table 1 shows that, while evidently slowing, Canadian factories have still managed to eke out modest gains in real output this year (through September). This was underpinned by gains in 12 of the 18 industries.

Digging into the details, outperformance was seen in consumer, machinery, non-metallic minerals, and fabricated metals categories. The latter two were likely supported by demand from construction activity. The transportation sector saw positive, if modest gains, lifted by notable strength in aerospace and motor vehicle shipment volumes. At the other end of the spectrum, weaknesses in the primary metals, wood, and paper sub-sectors remained. These categories were impacted by tariffs and trade uncertainty, weakening global demand, and challenges in B.C.'s forestry sector. 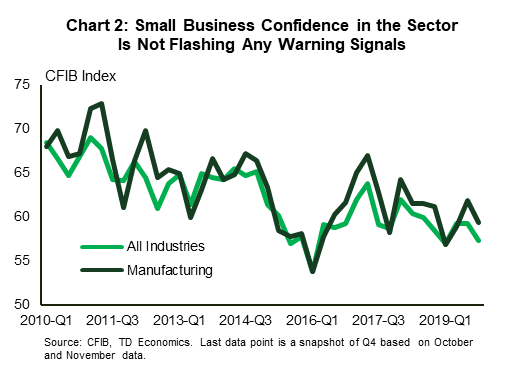 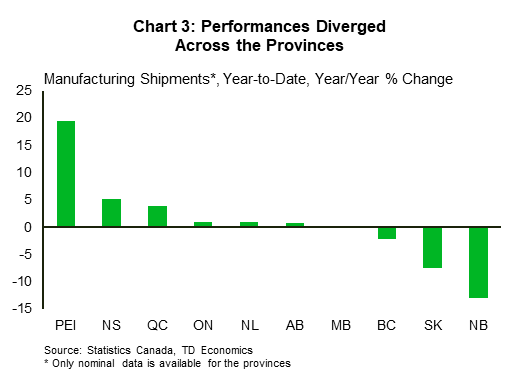 In terms of regional performances, provinces with a heavy presence in the wood and paper manufacturing industries have experienced contractions in nominal shipments this year (Chart 3).3 These included B.C., and to a lesser extent, New Brunswick.4 On the other hand, Quebec's strong performances stood out, driven by healthy gains in the transportation and machinery categories. In Ontario, strength in the fabricated metals and transportation industries was partly countered by disappointing growth in primary metals.

One area of surprise has been employment. Both key surveys from Statistics Canada have pointed to increases in jobs relative to last year, although some reversals have started to show in recent Labour Force Survey releases. A jump in wage growth in the manufacturing sector (+7.5% y/y) lends credence to this picture of labour demand strength.5 Of note, this outperformance of hiring relative to output is not just a story within manufacturing, as other sectors have also recorded similar trends. We have previously noted that this could partly be a function of elevated uncertainty, as companies opt to hire rather than invest in capital to meet near-term demand for their products. Regardless, the gap between activity and employment performance indicators is unlikely to continue.

Reliance on the U.S. provided some counterbalance 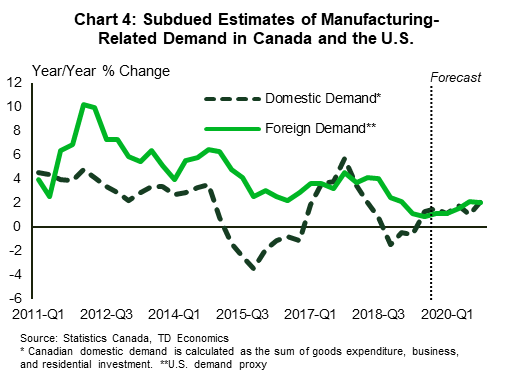 A closer look at the overall foreign and domestic demand picture helps to shed some light around the potential drivers of this recent performance (Chart 4). Canadian manufacturing sales are roughly evenly split between those oriented towards the domestic market and those exported.6 For manufacturing exports, around 80% are destined to the U.S. market. In turn, U.S. demand is proxied by an index that we compiled that draws significantly from the Bank of Canada's Foreign Activity Measure. The measure is heavily geared towards areas that Canadian manufacturing exports are highly sensitive to, such as U.S. business investment, consumer spending, and residential investment.

A few high-level takeaways on this year's drivers are:

In broad terms, we see next year's Canadian manufacturing performance as not dramatically different than this year. We would characterize the outlook as flat-to-slightly down.

Canada's manufacturing sector has been recording modest output and hiring growth this year - notwithstanding elevated global headwinds and a factory recession globally. Our near-term outlook points to a moderate step down in 2020, in part reflecting a continued benign overall demand picture as well as a partial reversal in some of the temporary factors that have contributed to the recent outperformance. 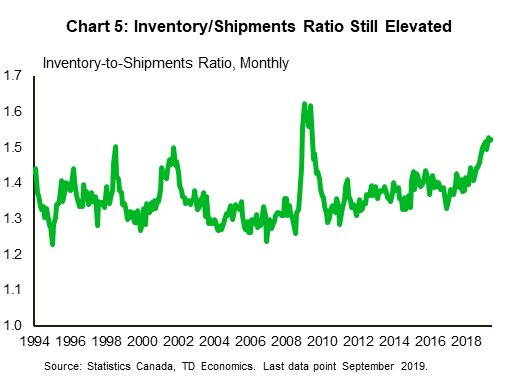 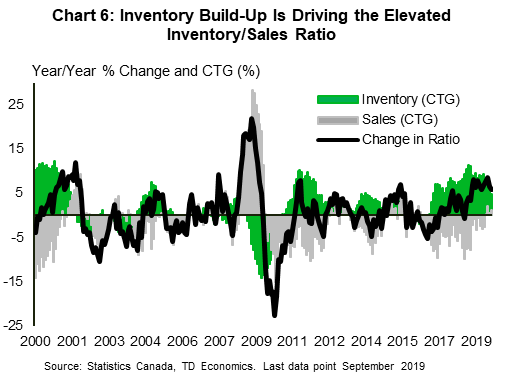 The elevated inventory/shipments ratio in the manufacturing sector has been raising eyebrows since last year (Chart 5). An elevated I/S ratio should be monitored, given its potential impacts on future production decisions. This is especially relevant in the case of slowing sales. Taking a closer look, Chart 6 shows the decomposition of the y/y changes in the inventory/shipments ratio. This ratio can increase due to: 1- lower sales growth and/or 2- higher inventory build-up. The decomposition below shows that, for most of 2018 and 2019, sales growth has been working to lower the ratio, as seen by its negative contribution to growth (which is encouraging). Instead, it is the ongoing increases in inventories experienced since 2017 that kept the ratio at its elevated levels.

Digging into the details reveals that the sectors driving this inventory build-up include transportation, machinery, metals, and food – most of which are trade sensitive and have high export intensities. We hypothesize that this was likely caused by the elevated levels of trade uncertainty in these sectors since 2018. While not our baseline scenario, if sales don't pick up meaningfully, elevated inventory levels could spur reductions in production, exacerbating the impacts of a slowdown in demand.