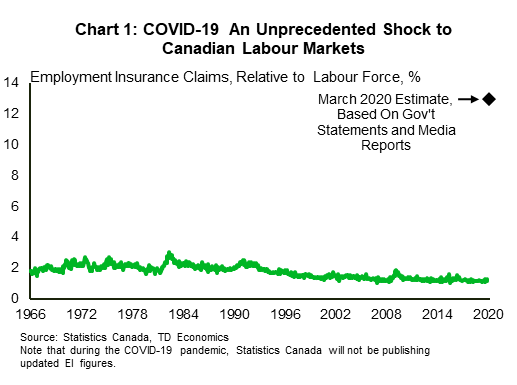 The past few weeks have seen a whirlwind of announcements intended to mitigate shocks to Canadian incomes as the scope of the COVID-19 pandemic and the necessary public health response have become increasingly clear. Key among these are two major ‘prongs’ – the CERB for those who have been laid off or otherwise lost their incomes because of the pandemic, and a 75% wage subsidy intended to mitigate against such outcomes. The latter brings Canada roughly in line with many of our advanced economy peers with similar programs, many of which have been modeled on the German Kurzarbeit (short-time) system. This note outlines Canada’s new measures, how they compare with our peers, and what can be done. Canada’s two-pronged approach puts us ahead of many of our counterparts, but unsurprisingly given the speed of movement, there are some gaps that could be filled to make these measures truly best of class.

The first prong of the Federal government’s response was the introduction of a pair of new income supports that were aimed at assisting those who may not be able to access EI benefits (self-employed, forced to stay home, etc). These came alongside expansions of the GST credit and the Canada Child Benefit. Within a week, the government had evolved its approach, wrapping the two income supports up into the single CERB, while expanding the overall size and scope of the combined measure. It is notable that there is no direct parallel to the CERB among our advanced economy peers. The key features of the CERB include:

The CERB appears likely to be particularly impactful for lower-income workers. Under the EI system, the maximum monthly payout is approximately $2500 (55% of the maximum insurable earnings of $54,800 per year), but someone who earns $40,000 per year would receive just $1800 per month from EI, less than the CERB provides. On balance, the CERB appears well designed, helping fill in many of the gaps in income support systems that were not designed for as unusual an event as the COVID-19 pandemic.

The other prong came later, but is much larger in scope. The Canada Emergency Wage Subsidy aims to pay up 75% of employees’ salaries, up to $847 per week. This covers nearly all types of workers, including part-time, and under certain conditions, temporary and seasonal workers. Although intended to run for only about three months (covering mid-March to early June), the scope of the program means it has a sizeable price tag of $73 billion. However, since it is expected to incentivize many companies to retain workers rather than lay them off, the federal government calculates an offsetting $28 billion reduction in expected CERB spending, from $52 billion to $24 billion. Unsurprisingly, given the rapid pace of developments, there are a few strings attached, and a few unanswered questions:

The subsidy will be retroactive to March 15 and like the CERB, administered by the CRA. Guidance on the definition of pre-crisis pay is forthcoming. Applications for the subsidy are expected to open mid-April, with the first payments due in mid-May. This may create a challenge for some employers who may not have the resources to continue paying salaries while awaiting the subsidy payments. Other programs, such as zero interest loans and loans/guarantees from BDC/EDC can help bridge this gap, but these too can take time to access and many business owners may be reluctant to take on additional debt. To be sure, ramping any of these new programs up will take time, so some degree of ‘waiting damage’ is likely unavoidable. A low margin firm may be able to prove they are unable to top up the salary (acceptable under the program), but still not be able to participate due to a lack of funds to pay the 75% while awaiting reimbursement. Even where low or no interest loans are available quickly, it may still make more sense to furlough staff if no ‘catch-up’ in revenues is likely post-pandemic. This is likely to be true of many personal service providers given the nature of their business. An important element of the subsidy, its encouragement of a continued employer-employee relationship, may be weakened by these challenges.

Still some cracks to fill

The response from all levels of government has been commendable. Given the rapid pace of developments, it is not surprising that some ‘edge cases’ exist, largely related to the CERB. As noted in a recent C.D. Howe Institute memo, the CERB is not, in its current form, designed to deal with income reductions – this would (or should) be covered by the wage subsidy, assuming that an individual’s employer is able to continue paying 25% of wages. But, to take just one example, an individual with multiple jobs could be let go by one employer on the assumption that she/he would receive CERB, but not qualify for it as they continue to receive income from their other employer(s). Similar scenarios are possible for those on disability support programs that allow employment income, such as Ontario Works. B.C. has already indicated that the CERB will not affect disability or income assistance payments.

There is also the question of students and whether the rescinding of a summer job or co-op term offer would qualify for CERB (the government has already indicated that students “planning on working this summer” would not qualify). For both this issue and that of multiple jobholders, Prime Minister Trudeau has indicated that some adjustments may be incoming, such as a tweak to allow qualification for those who now work less than ten hours per week as a result of COVID-19, rather than zero as the system currently operates.

On the wage subsidy front, for certain types of firms that may have little or no traditional revenue, such as start-ups, qualification is unclear. In these cases, alternate metrics such as a freezing of funding availability may make sense as a qualifier. The degree of adaptiveness displayed so far provides a degree of comfort that these and other potential issues are likely to be addressed in the coming days and weeks. Unlike some of our peers that have included ‘special’ top-ups for lower- or minimum-wage workers, the CERB makes such special supports unnecessary. Those making less than roughly $20/hour would see their income completely supported by the CERB if there were assigned zero hours by their employer. Given that this group would include many ‘front line’ workers such as cashiers, personal support workers, and others, it bears noting that quitting a job precludes you from receiving the CERB.

How do the Federal government’s actions to date compare with our global peers? On balance, income support promised to Canadians is somewhat favourable. The CERB supports those who have lost all hours of work or their job, while the wage subsidy should help mitigate those outcomes. Our slightly favourable comparison stems from this two track response – many peer economies have focused more on wage subsidies, building on Germany’s Kurzarbeit (part-work) scheme that kept its unemployment from moving more than a few tenths during the global financial crisis. Key elements of other responses include:

Table 1 provides a summary of these and other international wage subsidy programs. Compared with these countries, Canada’s wage subsidy falls somewhere in the middle, owing to the income cap (it is notable that this is set at the maximum pensionable earnings level, which takes average earnings into account), but unlike many countries, the CERB provides an additional, sizeable income support for those who have been laid off or had their hours reduced to zero, making direct comparisons of overall income support programs difficult.

The U.S. administration has taken a slightly different approach to wage subsidies with its 'Paycheck Protection Program' (PPP). Designed to provide eight weeks of cash flow assistance to small businesses, $350 billion has been made available via Small Business Administration (SBA) backed loans from financial institutions. Recent comments from U.S. Treasury Secretary Mnuchin suggest that a further $250 billion is forthcoming. 75% of the loan must be used to support payrolls, with the remainder more flexible. Acceptable uses for the other 25% include mortgage and utility payments, for example. Up $10 million per loan is available (or 2.5 times a business's average monthly payroll cost in 2019, whichever is lower).

If a recipient firm can meet several criteria, key being maintaining their employment levels over the eight-week period following origination, the loan converts into a non-taxable grant (100% of the loan; the forgivable portion will be reduced proportionately with staffing reductions). This feature makes the program more generous for those that receive it when compared to other countries' approaches. There are a few key caveats however. Unlike in Canada, there is a limit on firm size, and crucially, unlike most other plans, there is a cap on funds, both in the $10 million loan limit, and in that the $350 billion will be distributed on 'first come, first served' basis. On a relative basis the PPP is smaller in size than the Canada Emergency Wage Subsidy (CEWS) – even taking the additional $250 billion into account. Indeed, given their natures, the 2.5% of GDP likely to be transferred via the PPP is perhaps best thought of as a cap on the program, while the 3% of GDP for CEWS is a simple estimate with the final cost hinging on the degree of uptake.

The federal government has quickly stepped in to build income bridges in response to the COVID-19 shock. The two-track approach of payments for those laid off/given zero hours and wage subsidies to encourage employee retention makes Canada somewhat unique relative to our peers. There are still some gaps to be filled and we expect to hear more about on both gaps and supports for the hardest hit sectors in the coming days and weeks. All told however, we have so far seen a reasonably convincing response to the sizeable income shock currently hitting Canadian families.