Checking in on Canada's Economic Recovery 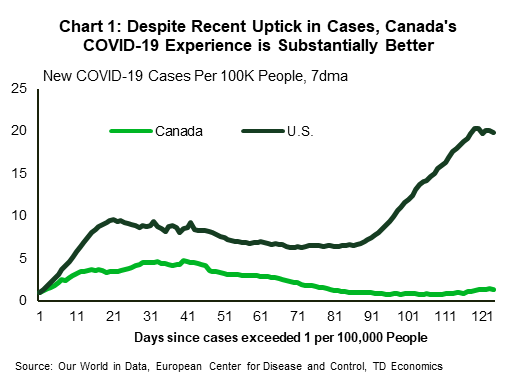 In our June edition of the Quarterly Economic Forecast, we had projected solid GDP rebounds in Q3 of nearly 30% (annualized) in both the U.S. and Canada following contractions of more than 30% in Q2. Canada was set to underperform in 2020 due to a deeper contraction in the first half of the year.

In a more recent report, we highlighted the growing downside risk to that US Q3 call owing to surging COVID-19 cases in some southern and western states. In contrast to actions taken at the start of the outbreak in March, new restrictions implemented in affected U.S. regions have so far been more targeted, while the impacts of have yet to show up conclusively in the data. However, it does appear that June’s upward momentum has been sputtering in affected areas so far in July. Indeed, a forecast released by the Bank of Canada in its July Monetary Policy Report showed a better 2020 real GDP projection for Canada (-7.8%) relative to the U.S. (-8.1%), despite Canada facing the added burden of an oil price shock and a larger drag from elevated household debt. This increased pessimism around the U.S. recovery path has also recently been echoed by Federal Reserve Officials.

In contrast to the U.S., Canada’s near-term outlook appears to be holding intact early in Q3.

We now turn to some of the latest data that are setting the tone for Canada’s performance early in Q3. 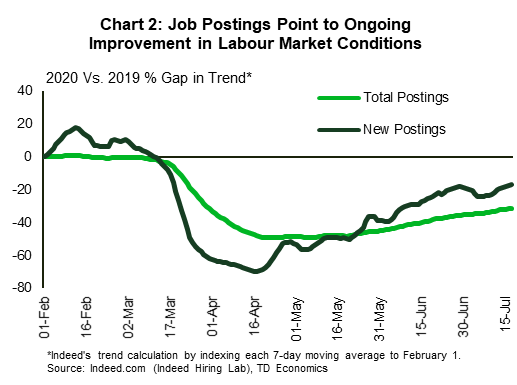 The stronger-than-expected rebound in employment has been a key driving force behind the optimism in Canada’s recovery. While still a long way from pre-pandemic levels, job markets have recouped more than 40% of their pandemic losses as of June, with broad-based rebounds seen across different regions and sectors. This came despite Ontario’s relatively delayed reopening plan. The continued progression towards Stage 3 in parts of Ontario (and potentially soon in Toronto) should inject the labour market with some added momentum in July and August data.

Turning our attention to higher frequency indicators, labour demand, as proxied by job postings, continues to recover from its April trough (Chart 2). Total job postings in mid-July have recovered to around 31% below 2019 trends (compared to a nearly -50% trough), driven by a quick rebound in new postings. Elsewhere, Google Trends data point to a downtrend in employment support and unemployment-related searches, which are now at significantly lower levels than during the peak lockdown period (Chart 3).

One exception to improving labour market indicators is Google’s workplace mobility data, which has clearly hit a standstill since late June (see Chart 5). With parts of Ontario having moved to Stage 3 of its reopening plans, a near-term uptick is possible. That said, work-from-home policies in many services industries may at least be partially contributing to the stalling in workplace mobility indicators, as suggested by the levelling off in other economies further ahead in the recovery stage (i.e, Germany, France). 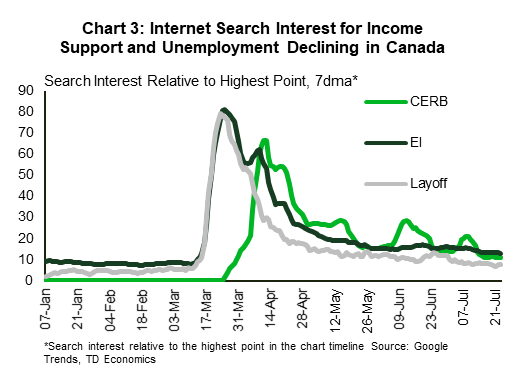 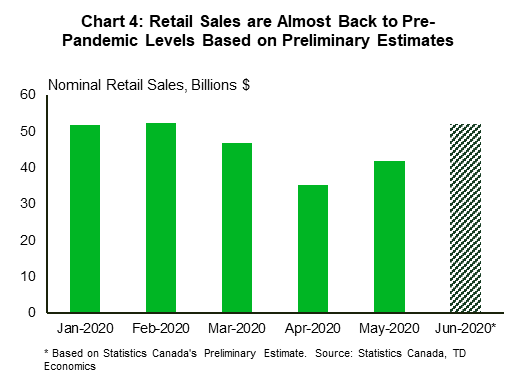 …Supporting a Strong Rebound in Consumer and Housing Indicators

Partly reflecting this better-than-expected outturn in employment data and continued government income backstops, consumer spending figures in the recovery period have surprised on the upside. Indeed, the latest preliminary retail trade data suggests a solid, V-shaped rebound, with activity in June estimated to be back at pre-COVID-19 levels (Chart 4). This “flash” estimate is subject to uncertainty and revisions, but new vehicle sales data from DesRosiers for June (now around 16% below year-ago levels compared to 75% in April and 44% in May) imply that the rebound in retail trade will be strong.

More timely indicators in July reaffirm this conclusion. For instance high frequency spending data (see report) suggest that consumer spending reached year-ago levels in early July. This is consistent with Statistics Canada’s preliminary retail trade data, although the spending data covers a broader slice of household spending, notably on services. Google’s mobility trend data shows sustained improvment (although at a reduced pace of late) in retail & recreation visits up until late-July (Chart 5). However, the accelerated shift to online retail implies that the recovery in this indicator will likely flatten out at some point. 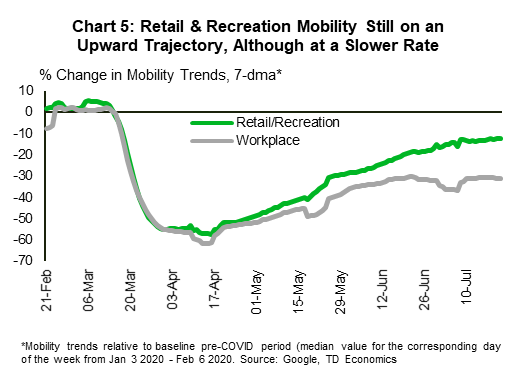 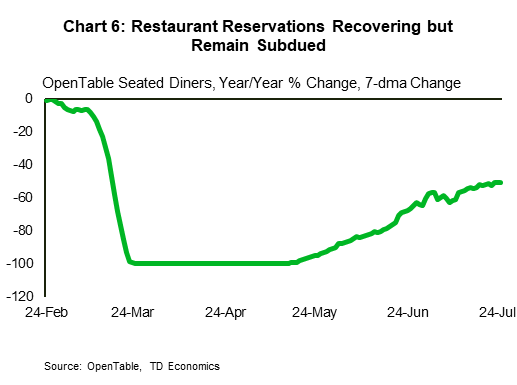 In a similar vein to consumer activity, housing markets have witnessed a strong snap-back in demand from April’s deep slump, leaving sales activity close to pre-COVID levels and above year-ago levels. Tight housing markets have prevented any sustained notable price declines thus far during the pandemic. While our forecast for sales and prices builds in some downside over the medium term from lower population growth, this projection may prove cautious. 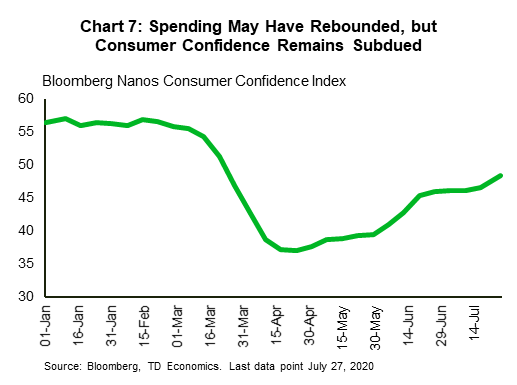 Turning to the battered accommodation and food services sector, OpenTable restaurant reservations also point to continued improvement in restaurant bookings (Chart 6). However, they remain far from year-ago levels. The improvement in this sector, of course, remains on shaky grounds. For one, indoor dining activity has been one of the targeted activities in second-wave-hit locations outside of Canada. In Canada, the sector is presented with a unique risk given the expected weather limitations on patio dining as we head into the fall.

In contrast to consumer and household data, measures of business activity have been more gradual and lagged. Preliminary estimates by Statistics Canada suggest that manufacturing sales have seen a decent rebound but remain around 16% lower than pre-COVID figures in June. The timelier, forward-looking confidence and sentiment indicators for these sectors (CFIB small business confidence, Markit manufacturing PMI) are hinting at decent improvements into June and July, but also remain at relatively subdued levels. High-frequency rail loadings data point to continued but more gradual recovery. in industrial activity (Chart 8). Business activity in general, is expected to lag that in the consumer sector given heightened global macroeconomic uncertainty and still-mandated restrictions on some sectors. 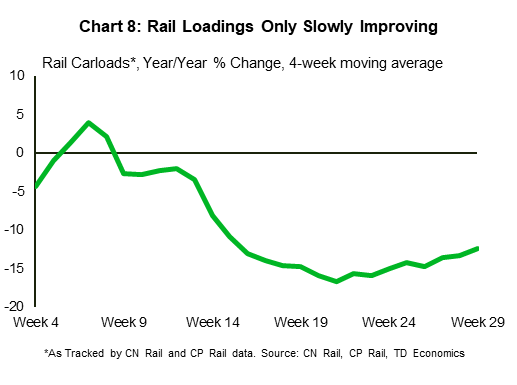 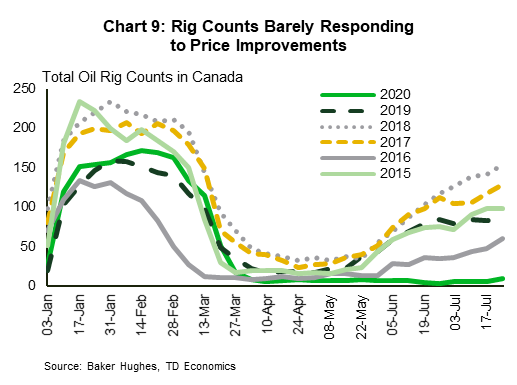 One key area weighing on the outlook for business activity is Canada’s energy sector. WTI Oil prices have stabilized in the low US$40s after dipping to unprecedented lows in March-April time period – although they remain more than 20% below pre-pandemic levels. WCS oil prices have recovered by even more given the now-narrowed WTI-WCS spread. As a result of the improvement in prices, reports and recent earnings releases suggest that some companies are restarting portions of previously shut-in production. However, weekly oil rigs counts are barely budging to price improvements and remain at record low levels (Chart 9). This is a sign of extremely dampened investment in the sector amid heightened uncertainty on global oil demand and prices.

While imperfect, most indicators released in recent weeks point to a recovery that is still intact in Canada heading into Q3. Certainly, there are good reasons to remain cautious on numerous fronts. The recovery in Canada’s largest trading partner could face a bumpy ride amid recent surging infections, while renewed outbreaks in a number of Canadian provinces bare watching. There is also a concern that part of the strong rebound in consumer spending may have been driven by pent-up demand and government assistance – influences that don’t tend to have staying power. The road to recovery has always been expected to be gradual, with a few bumps possible along the road. The recent better-than-expected data heading into Q3 does not change this, but it does place Canada on a potentially better trajectory in the near term compared to some other countries.