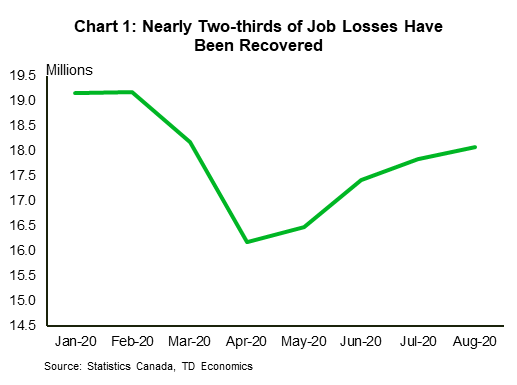 Since the reopening of provincial economies, the Canadian labour market has made rapid gains. Nearly two-thirds of the jobs lost during March and April have been recouped over the May-August period, taking employment to 94% of its pre-pandemic (February) level (Chart 1).

On its face, the labour market’s rebound so far has outperformed even the most optimistic expectations. However, underneath the hood, the story remains one of a very uneven recovery. Employment in some industries has rebounded by far less than others. This is especially the case for high-touch industries such as accommodation and food as well as public transit and air transportation services, which have been deeply impacted by the pandemic.

Looking ahead, the labour market recovery will likely continue, but more slowly and in an uneven manner. Job gains in rapidly-improving industries will dissipate as they approach February levels. With pandemic-related uncertainty elevated, businesses will not be in a hurry to hire more workers. Other industries that have struggled to recover will continue to face challenges, at least until a vaccine is widely distributed. Indeed, the path of the labour market recovery will be closely tied to the evolution of the health crisis.

Chart 2 reveals the marked contrast in recovery speeds across key industries. Of the 1.9 million jobs added since April, 1.2 million (or 61%) can be attributed to six industries alone: education, trade, health and social assistance, professional, scientific, and technical services, other services, and manufacturing. Each of these six industries recouped more than 70% of jobs lost through March and April. Conversely, all other industries have only recovered at most 60% of employment losses.

The educational services industry saw the strongest employment rebound over the past several months as school boards increased hiring ahead of the new school year. This took employment in the industry to 98% of its pre-pandemic level.  The trade services industry also saw a solid bounce back in employment recently. Like educational services, almost 80% of lost trade service jobs were back by August. Within this industry, both retail and wholesale trade contributed to job gains. However, while retail trade employment remains below pre-pandemic levels, jobs in wholesale trade are now higher. Indeed, the wholesale trade industry has been among the biggest winners from consumers staying close to home (i.e. household furnishing, personal goods, and building materials and supplies).  On the business side, a strong rebound in trade activity over the past few months has also benefitted Canadian wholesalers. 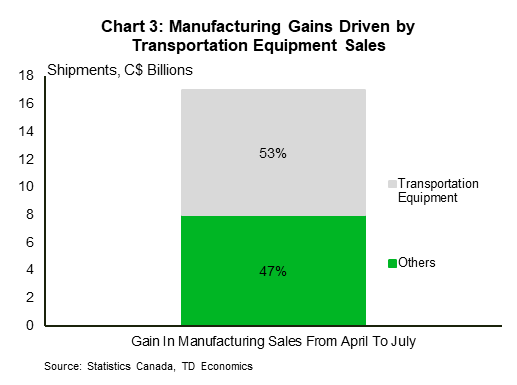 In that vein, the only goods-producing industry to see above-average employment gains was manufacturing. By August, it had recovered 73% of the jobs lost during March and April as activity improved. The transportation equipment industry played an important role in the employment rebound as it was responsible for more than 50% of the increase in manufacturing sales from April to July (Chart 3).  Many auto manufacturers shortened or entirely skipped their summer shutdowns this year which likely boosted employment in the overall manufacturing industry.

Compared to manufacturing, most other industries are seeing a more modest recovery in employment. A number of these are in “high touch” areas that have been hit hard by ongoing social distancing guidelines and weaker demand. For example, COVID-19 fears and rules on limited indoor seating has made a large dent in revenues for the accommodation and food services industry. As a result, businesses in this area of the economy will be in no rush to return employment to pre-pandemic levels especially in light of rising caseloads since late August.

The situation is similar in the information, culture and recreation, business, building and other support services as well as the transportation and warehousing industries. In the case of the latter, the drag on employment is from the transportation industry — particularly in public, air, and rail transportation — which has been hobbled by the pandemic. Warehousing, on the other hand, has experienced a steady rise in employment since the April dip (according to Survey of Employment, Payrolls and Hours data).

Notably, the only decline in employment since April was in the agriculture industry. This outcome was also probably caused by the pandemic. According to reports, a number of farms cancelled their seasonal worker programs, which could have played a role in reducing employment in this area of the economy.1

On aggregate, the labour market picture could have been worse if not for the Canada Emergency Wage Subsidy (CEWS) program. CEWS incentivized employers to rehire or not lay off workers by providing employee wage subsidies for businesses whose revenues suffered because of the pandemic. Since it can boost hiring while also preventing firing, it is difficult to map CEWS into the Labour Force Survey employment data. Early estimates suggest, that even while costly, CEWS did indeed assist the employment rebound.2 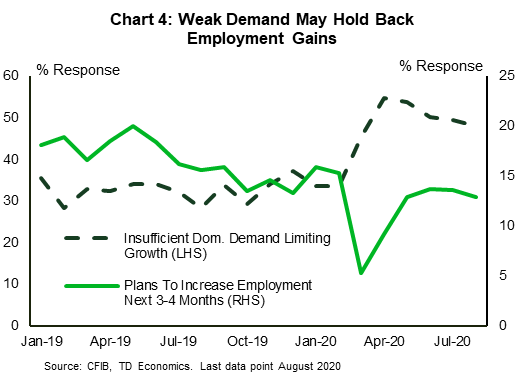 Despite the unevenness, the labour market is recovering faster than what we had expected. Reopening economies and the resulting unleashing of pent-up demand led to a rapid increase in employment. But as demand is fulfilled, employment gains will slow especially as pandemic-related uncertainty still fills the air. Put another way, it took four months to recapture 2/3 of the losses, but the next third could take another year or even longer.

In the near term, consumers are likely to clutch their purses a little tighter due to the pandemic reflecting dissipating pent-up demand, the end of the loan deferral period and the gradual transition off emergency household benefits. This, along with recent evidence of more precautionary savings, implies a slowdown in revenue growth for household-oriented businesses. According to the Business Barometer survey conducted by the Canadian Federation of Independent Businesses (CFIB), since March, around half of total survey respondents said that insufficient domestic demand was the main factor limiting their ability to increase sales or production (Chart 4). At the same time, the percentage of respondents that planned to increase employment in the next three to four months has trended lower over the past few months, pointing to a moderation in the labour market recovery.

In addition, CEWS, which has provided some support to the labour market rebound thus far, may offer less of a boost going forward. The program is slated to deliver lower base rate subsidies from September to its conclusion at the end of the year, which appears to be leading to a decline in its popularity. Moreover, in some industries, even a more generous subsidy than what currently exists is unlikely to keep businesses operating in the face of a near total revenue collapse.3

Indeed, the labour market recovery will continue to be uneven. Without a vaccine, businesses in struggling industries (i.e. food and accommodation services, transportation, recreation) will continue to face challenges, thereby weakening employment prospects in these areas. Conversely, industries less impacted by the virus, could see faster employment growth, but not as rapid as it was in the months directly following the lockdowns. Due to the jagged nature of the recovery, the industrial makeup of Canadian employment will likely have shifted when the labour market reaches pre-pandemic levels, which we foresee will be in late-2021. 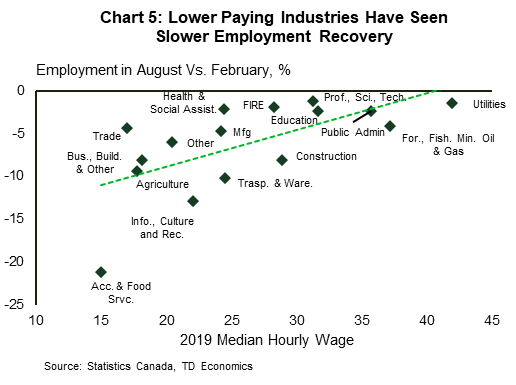 The labour market has rebounded, recovering two-thirds of the jobs lost early in the pandemic. But the recovery has been uneven so far, with industries most impacted by the crisis still a long way from getting back to pre-pandemic levels.

Many of the industries challenged by the crisis are also lower paying ones (Chart 5). Some jobs will not come back in these industries, meaning workers may have to look for jobs in other areas of the economy. This search period will take time, prolonging the labour market recovery.

Fiscal programs will play a crucial role in supporting workers through this period. The Canadian Emergency Recovery Benefit (CERB) has done well to lift incomes by providing $500/week to unemployed individuals. While they provide less support ($400/week), the next phase of programs — expanded employment insurance and Canada Recovery Benefit (CRB) — will continue to supplement incomes over the next 26 weeks. This will be important for two reasons: one, income support ensures spending which in turn helps employment growth, and two, it promotes inclusive economic growth which is fundamental for the durability of the recovery.

Ultimately, however, the path of the labour market recovery will be closely tied to the evolution of the health crisis. A substantial increase in COVID-19 caseloads could see provincial governments re-impose social distancing guidelines that could weaken the pace of employment gains or worse, lead to another decline. It is also possible that a faster-than-expected vaccine shifts employment growth into a higher gear. Much is uncertain. What’s less ambiguous though, is that this next phase could be the bumpiest in the labour market’s road to recovery.