The Long-Run Impact of the Recession 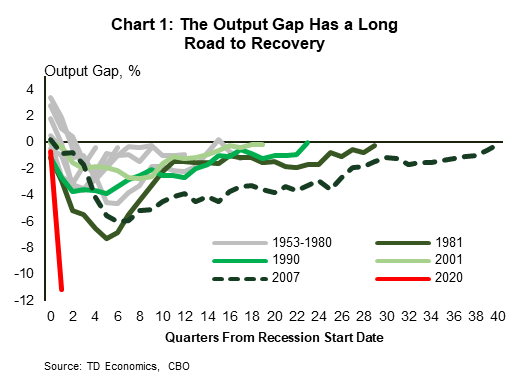 Recessions not only disrupt the present but can also alter the long-term economic growth path. There are many differing and colliding reasons for this outcome, not the least of which is the complex inter-relationship between aging demographics, automation, the digital shift, and the lower diffusion of technological innovation globally. Just based on the depth of the current recession, recovering back to the pre-recession level of GDP will take at least three-to-four times longer than the duration of the economic contraction itself. And for those who prefer the counterfactual world, this would still leave the economy far off the mark that would have existed in the absence of the pandemic setback (Chart 1). In fact, it is very possible that the combination of those pre-existing forces and the unique challenges imposed by COVID-19 cause economic growth to be permanently lower, suggesting that we will never really return to that counterfactual world. Here we are referring to a shift downwards in potential GDP. In a twist, this would help to close the output gap earlier in Chart 1, because it means that the size of the economy would be permanently lower, creating a shorter road to take up excess capacity. 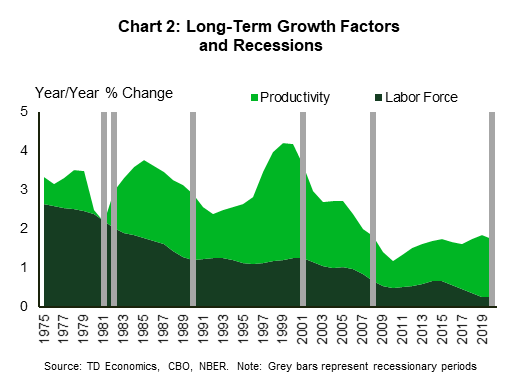 The pandemic-induced recession carries these fingerprints and more. It is completely unfamiliar territory that a virus and its containment are the key determinants of the timing, sustainability and strength of an economic recovery. Several unknowns now underpin longer term growth prospects. For instance, will we see high levels of unemployment and health-insecurity cause people to delay child bearing even more than a typical recession? Will the forward momentum of women in the labor force be halted or thrown in reverse due to greater child care responsibilities as services are reduced in the market place? Will aging population dynamics be pressed further by an even deeper/extended reduction in skilled workers or needed labor immigration into the country? To what degree will labor market hysteresis set in? These would create greater risks of a backdrop reflecting less (productive) workers, less production, less spending, and less economic growth (Chart 2).

Additionally, the current environment has put companies into survival mode for reasons that differ from past recessions. Limitations on operations due to health rules reflects a supply side restraint typically absent from prior cycles. More than ever, business spending is narrowly focused on needs, not wants. That new productivity enhancing technology might be delayed or cancelled. Meanwhile, the formation of new businesses may become stunted, as is typically the case with recessions, but entrepreneurs face greater barriers to entry due to pandemic-induced hurdles. This prevents the introduction of new processes, products, services, technology. It also prevents the necessary job churn that creates opportunities and skills-matching between workers and employers. Recessions can impact productivity and lower the potential long-term economic growth in the best of situations, but this one faces higher hurdles on all fronts. 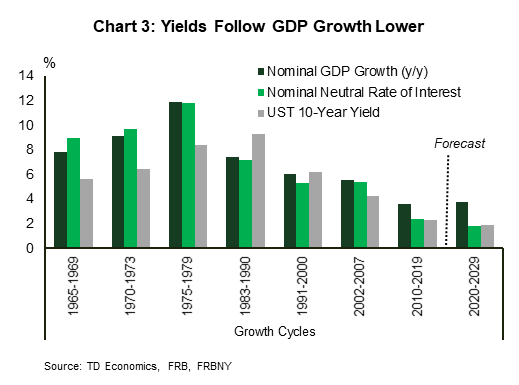 In this context, it’s not unusual to have central banker’s lean heavily on forward guidance that promotes a lower-for-longer interest rate environment. The minutes from the Federal Reserve’s June meeting revealed that members believe that “the committee should communicate a more explicit form of forward guidance for the path of the federal funds rate”. Fed Chair Jay Powell gave an example of this when he stated that the Fed is “not even thinking about thinking about raising rates”. This came through in the Fed’s dot plot which showed that the members see rates at the lower bound until at least 2022. Explicit forward guidance like this helps anchor longer-term bond yields at lower levels. This is particularly necessary to push against the economic risks of lower trend growth. In Chart 3 we show this direct relationship between economic growth and interest rates.

The Bank of Canada also adopted clear forward guidance when new Governor Tiff Macklem stated that “our message to Canadians is that interest rates are very low and they are going to be there for a long time.” For people like us who crave even more detail, he also confirmed that interest rates will only rise when the economic slack from the recession is absorbed and inflation is at 2%. By our forecast, that is most likely to occur in 2023, at the earliest.

Although we have clear guidance that the policy rate will be kept low for the next few years, what’s in store after that? In the long-run, the FOMC members forecast that the fed funds rate will get to a median estimate of 2.5%. This forecast has not changed since December 2019 and implies that Fed members have not incorporated long term scarring impacts from COVID-19. For the Bank of Canada, a rate of 2.5% is assumed.

We are not as optimistic. We believe that even when the economy recovers from the pandemic, the Federal Reserve and Bank of Canada won’t be able to raise rates to that end-point without adversely impacting the economy. We saw what happened when the Fed raised rates to the post-Global Financial Crisis high of 2.5% in late 2018. Interest rate sensitive sectors, such as housing demand, started to deteriorate rapidly despite the Fed adjusting policy in a historically slow and gradual process. For this reason, we only have the Fed getting to an upper bound of 2.0%. 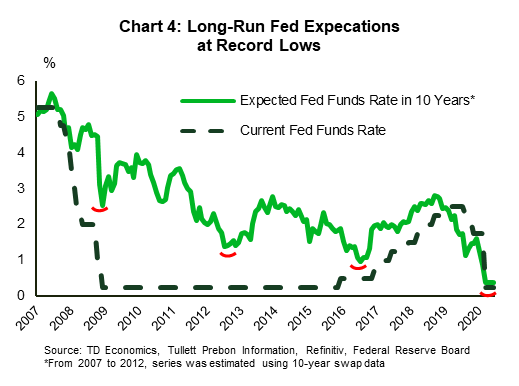 The same goes for Canada. Back in 2017 and 2018, the Bank of Canada raised its policy rate to 1.75%, while also importing higher bond yields from the U.S. This was happening at the same time as mortgage regulations, such as the B-20, were implemented to improve financial stability. The housing market and other interest rate sensitive sectors stalled under that weight. The BoC knows it needs to be cautious next time. This is made even more important because the Canadian outlook may contain more fragility than the U.S in the medium term due to a levered-up household and a much higher dependence on immigration to power the economy forward. Both offer big question marks that can potentially slow the recovery. In the end, we have penciled in 1.75% as a likely endpoint for the Bank of Canada in 2025.

Relative to the Fed and the Bank of Canada, our forecast is certainly less optimistic. But if you thought we were being too dovish relative to the central banks, just look at futures markets. They are pricing a fed funds rate that will be go negative within the next year. The pessimism is even more stark considering market pricing shows a fed funds rate of just 0.3% ten years from now! Even during the global financial crisis when the policy rate was sitting at zero, like it is today, the futures market did not embed this degree of pessimism (Chart 4).

This gloomy outlook gets directly transferred into longer-term Treasury yields. To calculate the U.S. 10-year Treasury yield, we take the shallow path of the fed funds rate over the next decade and add a small premium as compensation for interest rate risk. If futures are correct and the Fed is only able to raise rates to 0.3% over the next decade, the UST 10-year yield would likewise rest at a level of only 0.5% to 0.7%. However, we must caution our readers that futures markets are quite volatile and are currently skewed to the downside amidst unprecedented events.

Our view is that when the economy recovers over the next 5 to 10 years, and if inflation continues to be anchored around 2%, the Fed should be able to raise rates to a significantly higher level than what the market is pricing. Just adding inflation to a historically low neutral interest rate of 0% means that the Fed could raise rates close to our forecast of 2%. Alternatively, given the spectrum of market pricing of 0.3% at one end, and the historical precedent of 2% at the other end over a ten year time frame, it would be reasonable to assume a skew towards the latter as the more probable outcome. This would remain the case even if it takes longer than expected to develop a vaccine (recent news of Stage 3 trials commencing has brought optimism).

Moving Up the Risk Spectrum 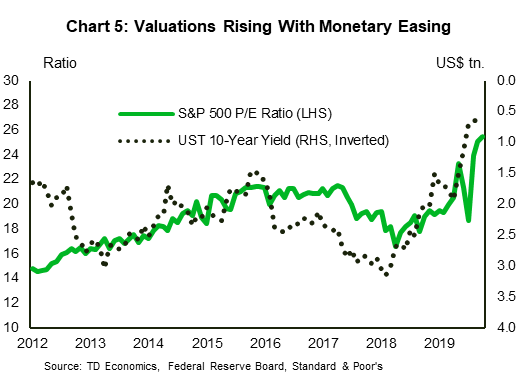 If the Fed can raise rates to 2% over the next decade, investors will still be looking at real yields (net of inflation) that are effectively zero. The same goes for the Bank of Canada. With such low returns from safe assets, there is clear incentive for investors to move up the risk spectrum. This has been a theme for a number of years. In 2008, the Federal Reserve dropped the fed funds rate to 0.25% and initiated Quantitative Easing (QE) in an effort to force government bond yields lower. Though this helped the economy recover, it also helped push the price of risk assets upwards.

The current narrative for investors is much the same. Bond yields are low as a result of central bank action, which drops the discount rate that is used to calculate asset prices. If the profits of publicly traded corporations recover over the next several years, the low level of bond yields directly pushes the present value of equities higher (Chart 5). In a world of low safe asset yields, the appeal of risk assets becomes greater.

Recessions typically result in level shifts in long-term economic growth rates. This would have a direct impact to lower long-term interest rates. Our assumption is that when the economy fully recovers from the pandemic, sovereign yields will still end up coming to rest at levels that will be lower than the peak level seen in the previous cycle. But this would still be higher than what’s currently priced into financial market expectations. In addition, there will still be an incentive for investors to move up the risk spectrum. This will be an area to watch for central banks as the incentives and behaviors could stoke asset bubbles. Perhaps it won’t be long before we are revisiting that familiar central bank debate on whether their role should encompass a broad objective of financial stability that can address asset bubbles. There are some things in the world that don’t change much.