Is the Latest Tariff Action our KerPlunk Moment?

Some of you will remember the children’s game KerPlunk. This is where marbles are resting on top of several suspended crisscrossing straws. The goal is for each player to pull out a straw on rotating turns, dropping the least amount of marbles through the straws and into the base. Eventually, the ability of the straws to support the remaining marbles suddenly gives way to the demise of that player. 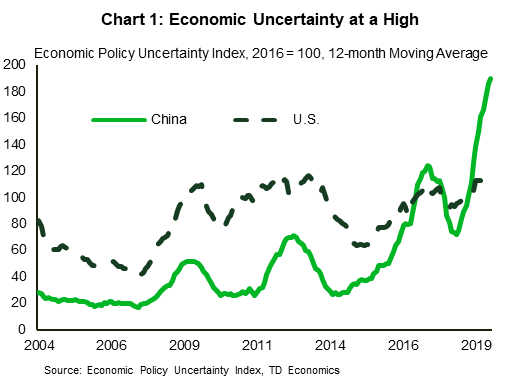 Did the global economy just hit its kerplunk moment with the latest tariff escalation by the U.S. on Chinese goods?

A tariff of 10% hardly seems like a high threshold to kick the legs out of business and market confidence. Many economists (including ourselves) would point out that a 10% tax on imported goods will not fully translate into an equivalent end-consumer price hike. Currency adjustments between the RMB and USD will offer some shock absorption, as well as the ability of businesses to absorb part of the cost either directly or through their supply chain negotiations. This has been happening all along and has spared the U.S. a greater negative shock on the domestic economy via direct income effects.

But, this time the consequences could be different. The latest trade action may simply have pulled too many straws from underneath market and business confidence. The base has become steadily more fragile with a lengthy disruption to trade flows undermining global growth prospects. This time last year, we were predicting global growth of 3.6%. Today, that forecast has been whittled down to 2.9%, the weakest pace in a decade. Businesses have been operating for two years straight with cost structures, market access and investment intentions that can change on a dime due to political announcements. Economic policy uncertainty indices are at a high in both the U.S. and China (Chart 1). Hindsight now shows that the renegotiation of NAFTA was one of the lower trade-hurdles to jump over because there was at least a pre-existing trade pact to build on. The China-U.S. trade war is more than a year underway and lacks that advantage. As does a potential EU-U.S. trade deal. Same goes for a Japan-U.S. trade deal, and so forth.

The latest 10% tariff in isolation is not an issue. But, the market reaction is suggesting that the administration needs to consider whether, after all the straw pulling, it is hitting its kerplunk moment on market confidence. One hint came when the USTR announced a beef deal with Europe on the same week that President Trump initially tweeted the threat of 10% tariffs on China. The ‘good news’ of a deal with the EU to import more duty-free American beef was completely ignored by the markets for many reasons.

First, the estimated amount of quota-free beef would rise from $150mn to $420mn over the next seven years once implemented later this fall by the EU. This is a long timeframe and, more importantly, is a drop in the bucket relative to what’s immediately occurring with tariffs on more than a half-trillion of Chinese imports into the United States. And, we cannot forget that China delivered $110bn in retaliatory action on U.S. exporters and is threatening to respond again should the administration follow through on September 1st with its recent tariff action. 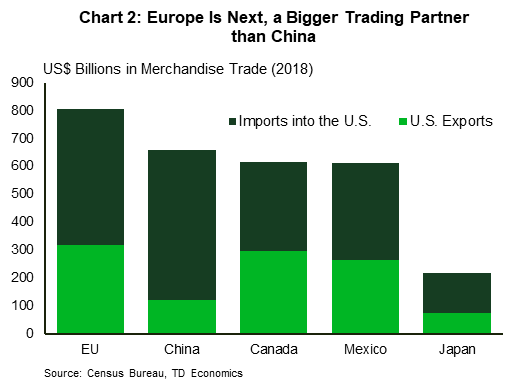 Second, the U.S. has not removed threats of auto tariffs on Europe and Japan, with a decision expected in November. And, a WTO decision favoring the U.S. on EU Airbus subsidy practices means another tariff strike is waiting in the wings. The EU-U.S. trade relationship is larger than that with China (Chart 2). So, even if a deal emerges in short order with China, the global strain will persist on Europe and other regions. For instance, India also recently came under retaliatory fire from the U.S., and other Asian markets (like Vietnam) have been warned. These are just the actions on countries known at this time. Few businesses and market participants would have anticipated the broad tariff threat placed (and subsequently removed) on Mexico a few months back in an attempt to address border security issues.

Third, for business and investor confidence to bounce up from a floor, it likely requires visibility, credibility and/or a swift off-ramp to the trade tensions. The latest tariff escalation with China served to reinforce a favored market reference: the trend is not our friend. 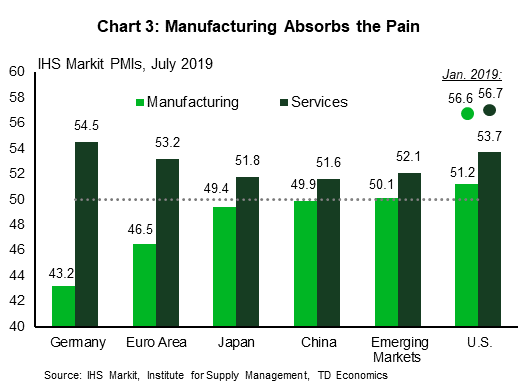 So, bond markets are battening down the hatches, fearing the global economy’s kerplunk moment may be close at hand. This has some foundation, as the economic strain is becoming ever more present within business sentiment indicators, including those of the U.S. (Chart 3). Even the Federal Reserve has been citing weakening business investment – captured by what will soon be three quarters running of decelerating non-residential structures and equipment. A recent report we did on the global determinants of U.S. manufacturing conditions suggests that this sector has more pain in store.

While lower interest rates certainly can’t hurt and should help mitigate economic pain, the global slowdown and deterioration in business sentiment is not occurring because the cost of financing is too high (though the pace of tightening had likely contributed). American businesses have benefited from large corporate tax cuts and face very cheap financing costs relative to history. The real (inflation-adjusted) fed funds rate is barely positive. Even before the July rate cut, it was well off levels that have preceded previous recessions (Chart 4). Tight financing costs are not the core problem and we are doubtful that lower yields will fully resolve what ails business confidence. 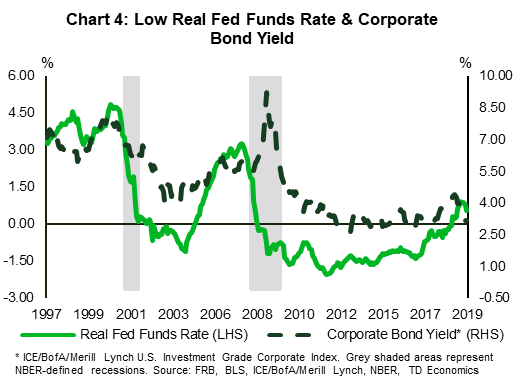 To complicate matters, low yields don’t seem to carry the same ‘oomph’ they once did for the household sector. Our analysis shows that for every 100-basis point move in mortgage rates, the sensitivity of demand for homes is roughly one-quarter that which existed prior to the many years ahead of the Great Recession. There are a myriad of factors for this related to both supply and demand side frictions, but the bottom line is that the roughly 110-basis point drop in the 30-year mortgage rate in the past eight months will offer only a modest fillip of growth to housing, provided confidence holds in the market. 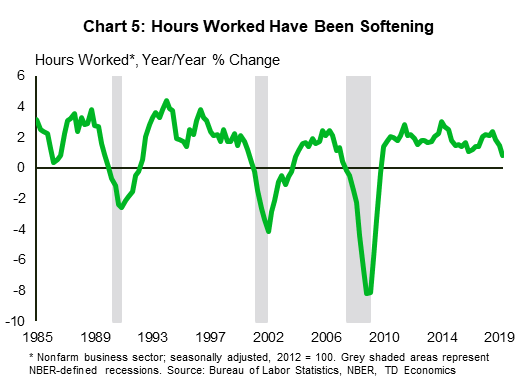 Another worrying sign has recently crept into the data directly affecting households. Although consumer spending remains strong, its persistence is dependent on the willingness of firms to keep hiring within economic uncertainty. On this, a yellow flag has gone up. Hours worked have softened, and this does have a decent leading correlation to the business cycle (Chart 5). It is not at thresholds that throw up a red flag, but once again, the trend is not our friend. Given the parallel softening in business sentiment and industrial production, the risk cannot be fully dismissed that negative hiring momentum builds.

This risk was recently made more acute by the brief inversion of the U.S. 10yr-2yr Treasury curve. It would need to be sustained and push deeper into negative territory to mark a red flag, but this potential signal should not be ignored. Although it is not a sure thing, it has been an accurate predictor of the last three recessions. This business cycle imposes new dynamics on the curve due to global central bank asset purchases and changes in regulatory capital requirements, to name just two factors that can distort its shape and diminish its signal relative to previous cycles. But, with the absence of hindsight, history remains our best guide until proven otherwise. 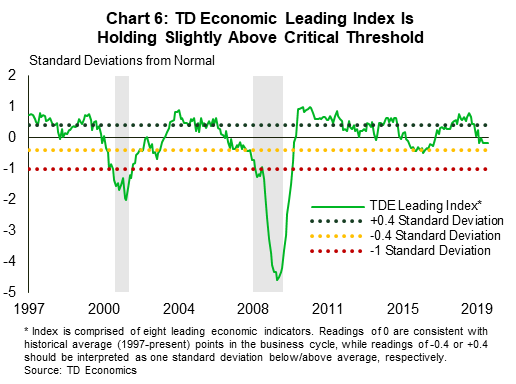 Despite all the financial market gyrations, our TD Economic Leading Index continues to hold above -0.4 standard deviations (Chart 6). This is the threshold that runs a high risk of hitting the point of no return towards recession. As a result, we maintain the belief that the economic cycle is more likely to see a repeat of the 2015/16 experience of slow growth, rather than negative growth.

To be clear, the principle of a more even playing field between nations is not in question. Our concern is that the process in getting there has become too jarring. As of right now, the economic data are holding up, but one more pull on the straws could be our kerplunk moment.