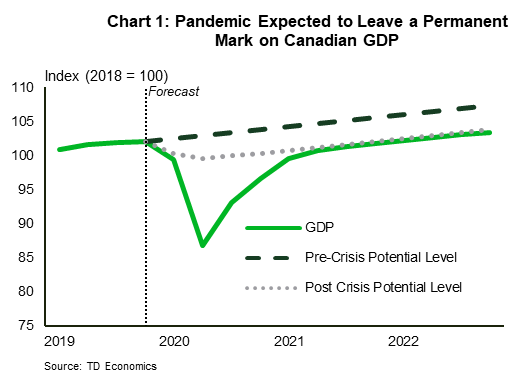 The COVID-19 pandemic has caused forecasters to re-evaluate their outlooks. A severe recession is now a certainty as social distancing and other needed public health measures have shut down large swathes of the economy. As captured in our last forecast update, an unprecedented near-term contraction of activity is expected (Chart 1). This contraction is expected to be evident in nearly all expenditure categories, from services consumption to business spending on machinery and equipment. This expenditure-based approach to measuring and forecast GDP is perhaps the most commonly discussed, but it is not the only way to slice the data. With differing restrictions, responses, and consumer/user behavior by industry, the aggregated nature of the expenditure-based approach is unlikely to capture the nuances of the current situation.

Fortunately, GDP by industry provides an alternative and perhaps more nuanced view of economic activity in pandemic period and the recovery. The variety of restrictions and business and consumer responses make it clear that no two industry’s outlooks will be quite the same. But, for many, they look similar. These similarities allow the use of an “LUV” framework for classifying economic outlooks (See our Chief Economist’s recent Perspective for more on the meaning of LUV). Our “U-like” outlook for overall GDP still appears most likely, but beneath the aggregate outlook, some industries, such as food retailers, are likely to outperform. Conversely, others such as oil and gas and travel, are likely to underperform for some time. The eventual post-pandemic outlook is not ‘one size fits all’, masking significant variation in industry outlooks. Note that a complete industry listing is provided in the Appendix – varying degrees of aggregation were applied in the analysis reflecting commonalities and differences.

The “L’s” Have A Long Road to Recovery 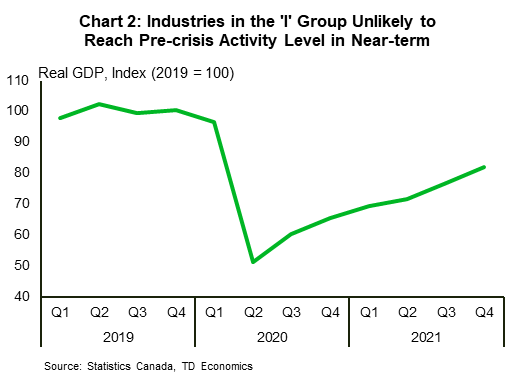 “Taking the L” takes on a whole new meaning in the context of COVID-19 (Chart 2). For some industries, the operating environment is likely to remain challenging for the foreseeable future. Indeed, output in this group is expected to be nearly 20% below pre-crisis levels by the end of 2021. There are seven clear candidates, accounting for approximately 10% of pre-crisis economic output, which are expected to remain in a very challenged environment for the foreseeable future. Air travel, ground transportation and tourism have already seen major setbacks as borders have been closed and routes cancelled. All indications are that these restrictions will remain in place for some time, and even when lifted, demand may be sluggish to bounce back. The ‘close quarters’ nature of air travel suggests that even as restrictions are lifted, in the absence of a vaccine, quarantine on arrival measures may be longer lasting, limiting travel to the absolutely necessary. The logic behind including accommodation in this category is similar.

For food services and drinking places, the immediate impact has been severe as being restricted to take-out/delivery saps a major source of income, and many bars and restaurants have concepts/business plans that are not compatible with takeaway. Experience from other jurisdictions, as well as guidance from public health officials suggests that even as re-opening occurs, it will be with severely restricted capacity. A similar outlook is likely for arts/entertainment. Many will welcome the return of sports, but the return of spectators in any significant number is likely to be some time away.

Finally, the oil and gas sector stands out less because of the direct impacts of COVID-19 on workers, but rather due to the demand shock that the pandemic has created and the resulting plunge in crude prices that has been accentuated by dissension earlier this year within OPEC+ (see report). Even as drivers’ demand rebounds in the coming months, it will take time to reduce large stockpiles both at home and abroad, limiting both near-term price upside and new investment. This is not to mention ongoing issues around pipelines and takeaway capacity more broadly. The energy sector is now facing a significant blow even as it had barely started its recovery from the 2014/2015 oil price shock.

The “U’s” Take Time to Recover

U-Shaped recoveries are likely for the bulk of major industries. More than 30 industry groups, covering nearly two thirds of economic output are in this category.  For this grouping as a whole, convergence back to pre-virus levels is likely to occur sometime in 2021. Many of these industries are likely to be able to adapt to social distancing guidelines quickly as measures lift.  However, these adaptations will still in many cases hamper output in the near term, while demand for goods and services will also take some time to recover (Chart 3). 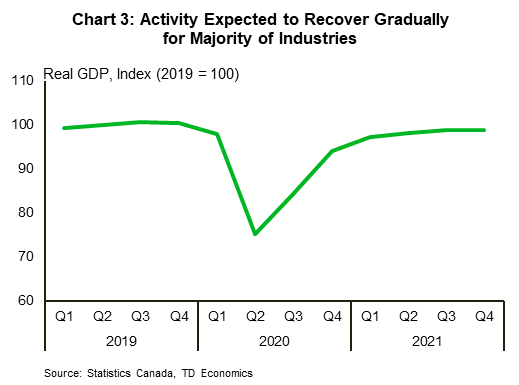 For manufacturers, physical spacing requirements and damaged order books appear to be the order of the day, keeping the rebound modest until later this year. It is a similar story for many retailers, where store openings will likely be staggered depending on physical location. Further, curbside pick-up and other measures that reduce the likelihood of impulse purchase are likely to remain in place for some time. The story is the same for real estate activity, where the current stasis period is expected to give way to only a gradual resumption of sales as continued uncertainty keeps buyers cautious.  (See our recent housing forecast update). For almost all industries in this category, new ways of doing business will be the order of the day for the foreseeable future, but adaptation in ways that re-assure workers, consumers, and others that they can work, shop, or place orders without fear should be possible.

For “V’s”, A Quick Recovery Likely 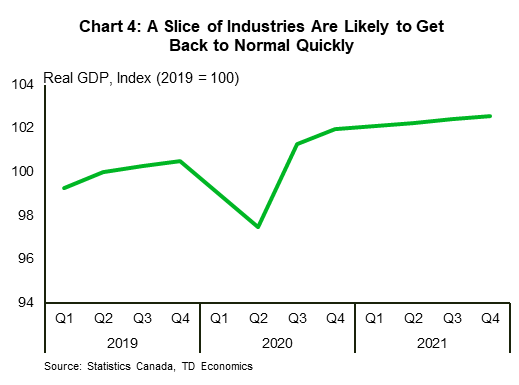 For some industries, the pandemic hit is likely to be either negligible, or short lived, leading to a quick recovery, or in some cases, simply a continued trend. This describes 12 major industries that produced just under 30% of Canada’s economic output last year. As shown in Chart 4, in aggregate we expect output among these industries to be somewhat above trend in the near term, before growth cools down a bit next year as activity normalizes. There are some obvious candidates here: food stores have seen a ramp-up in activity both due to precautionary motives, as well as a substitute away from restaurant meals. Similarly, for manufacturers of cleaning products and other needed chemicals, as well as medical equipment, demand for at least a subset of products has intensified. Food manufacturing also falls into this category, although the risk of supply chain disruptions, particularly in protein production risk sending this industry grouping to the U’s.

Gas stations are expected to recover activity quickly as most social distancing guidelines including opening up parks fairly early, and as work arrangements shift back towards ‘in person’, experience in other countries suggests that people are more likely to travel by car, rather than take the (perceived) risk of public transit. The shift to online shopping bodes well for non-store retailers, as well as the transportation backbones of the economy – particularly rail transportation, which is expected to normalize following blockades and other disruptions in February. Information processing and other online services have already benefitted from shifting work and leisure patterns. Health and social assistance are expected to pick up fairly quickly as well – most ‘re-opening’ plans include many shuttered services such as dentistry early in the timeline.

Perhaps a surprising inclusion in this list is education. This is a product of how these sectors get measured, which is on an hours-worked basis, rather than, say, pupils taught. While some near-term hit is expected, most teachers continue to be paid. What’s more, where school re-opening plans have been communicated, they involve a significant degree of social distancing between students and teachers, requiring additional physical space and creating the possibility that more teachers may be needed in the near term as student-to-teacher ratios drop. However, this is true largely for elementary, and to a lesser extent high schools. For universities and colleges, where foreign students have been a key driver of growth, enrollment and by extension hours worked may see a near-term hit as overseas students choose to stay in their home countries. Government policies around what qualifies one as a student in the context of remote education (i.e. whether they must be physically present in Canada) will be a key determinant of the ultimate path for this sub-sector.

Finally, while it is relatively small portion of GDP (about 0.4%), the “facilities and other support services” grouping, which includes janitorial and other cleaning services is set to experience a surge in demand. Nearly all re-opening plans include heightened requirements for cleaning and sanitization – a key element of giving workers and customers the confidence to begin returning to normal activities.

It has become a truism of late to say that uncertainty is elevated, but it is a truism for a reason – uncertainty IS elevated. Given the current context, it is important to keep assumptions, and the risks around them, clear. This analysis takes current re-opening plans into account, and assumes that they are effectively met. Delays in these plans would delay the recovery, stretching out the U’s, and possibly moving industries between categories. A second wave of infections is not assumed – such an outcome would of course zero out the recovery and would likely cause most industries in the U and V categories to look more like a sine wave. Conversely, a significant ramp up of test and trace capacity that brings new infection rates quickly to near-zero would likely increase consumer confidence and accelerate the recovery. And while something of a stretch, given the sheer number of groups working on it, an early vaccine would do much to improve the outlook for those industries in the L category.