Comin' Down the Mountain 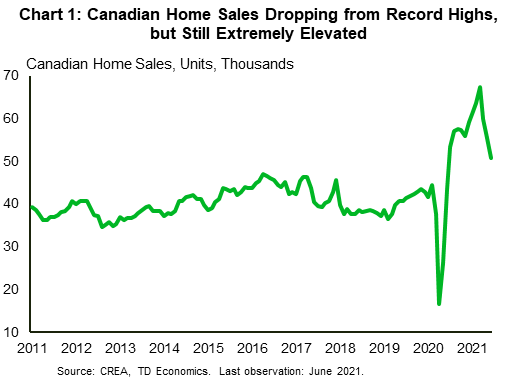 One thing was abundantly clear about the first quarter's stratospheric pace of Canadian home sales – that it was unsustainable. The question was how long it would hold up. As it turns out, March seems to have been the absolute peak of the mountain in terms of activity, a couple of months ahead of what we had anticipated in our outlook released last winter.

Since March, Canadian home sales have dropped by 25%. Although this is a steep decline, the actual level of activity through June remains blisteringly strong (Chart 1). Consider that if June's sales figure held up for the entire year, over 600k units would be sold. This would beat 2020's record level by a comfortable margin.

Now that sales have begun their correction in earnest, the interesting question becomes how steep the decline will be. Beyond merely unwinding from what were clearly unsustainable levels, a few other factors should weigh on activity. The tighter stress test rules that began on June 1st will likely be a near-term headwind, although the tightening this time around amounts to 46 bps, versus an increase of over 200 bps in early 2018 when the stress test was first implemented on uninsured mortgages.

Secondly, Canadian bond yields are likely to grind higher through next year.  While yields have pulled back unexpectedly in recent weeks on concerns around global growth and the Delta variant, we see this as a brief detour from the longer-term path of rate 'normalization'.  As the global recovery remains resilient and inflation forecasts continue to be nudged upwards, an upward trend in bond yields will likely reassert itself, taking mortgage rates along for the ride.

Increases in borrowing rates over the forecast horizon are likely to be relatively modest and gradual.  In our latest financial forecast, we expect the Bank of Canada to hike their policy rate only once through 2022 (in the second half of next year). Meanwhile, 5-year government bond yields are projected to rise by about 110 bps, respectively, from now until the end of 2022 (or less than 20 bps per quarter).  At the same time, however, each quarter point increase in rates is likely to have outsized impacts in today's high-priced market relative to the past.

Even as the affordability constraint continues to grow taller, we are forecasting sales to remain healthy at around 140k units in 2022 (Chart 2). For one, robust economic growth should support rising job growth and household incomes. Second, we expect population growth to pick up in the second half of the year, supporting investor demand. Lastly, households have a mountain of excess savings to deploy (estimated at over $240 billion as of the first quarter of 2021), and the latest Bank of Canada Survey of Consumer Expectations suggests that Canadian households plan to funnel 10% of these excess funds into down payments (Chart 3). 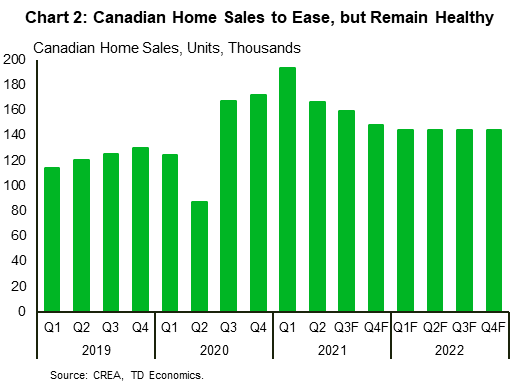 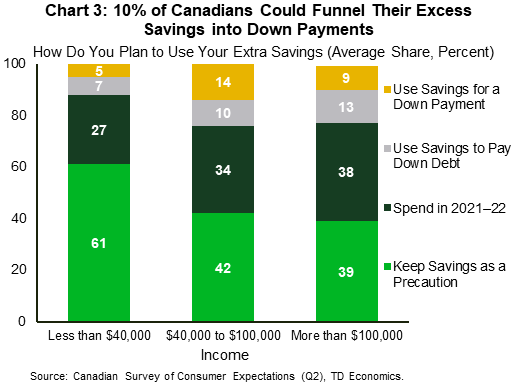 Regionally, the sales story is broadly playing out as we expected in our March forecast.  Alberta is topping the leaderboard with sales up 13% year-to-date. Other jurisdictions with favourable affordability conditions, like Saskatchewan and Newfoundland and Labrador, have also outperformed. On the opposite end of the spectrum, relatively steep year-to-date sales declines have occurred in places where affordability is more stretched, including Nova Scotia (-32% ytd), Quebec (-20%) and Ontario (-17%). This trend should hold moving forward, leading sales to underperform where affordability is poor by historical standards. Accordingly, relatively steep sales declines are anticipated for 2021 and 2022 (on a Q4/Q4 basis) in Ontario, Quebec and most of the Atlantic Region (Table 1). Meanwhile, we see better performances across the Prairies and B.C.

Home Prices: Growth Gearing Down a Notch or Two 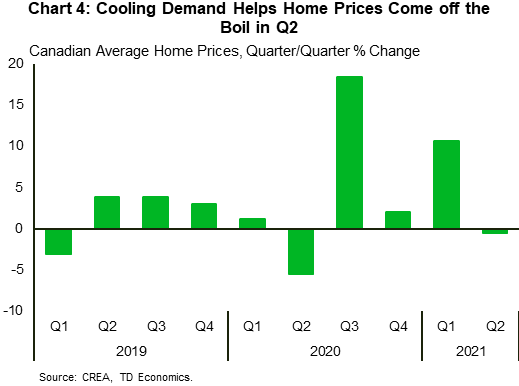 Home prices dipped slightly in the second quarter, marking a sea change from the 10% quarterly gain averaged from 2020Q3 to 2021Q1 (Chart 4). Yet markets remained drum tight, as the sales-to-new listings ratio was 73% – indicating that conditions were titled heavily in the favour of sellers. What's more, the ratio sat well above the 45% level that is typically associated with negative home price growth.

Why is home price growth slowing despite the ultra-tight supply/demand balances that continue to characterize many markets in Canada? In our view, an important piece of the puzzle relates to what is being sold. Note that Canadian average home prices (which can be heavily influenced by transactions on either end of the price spectrum) fell by an average of 1.7% m/m from April-June. In contrast, Canadian benchmark prices (which strip away these impacts) averaged a 1.3% m/m gain over the same period.

In line with our earlier expectations, sales of condos have consumed a rising share of the market (Chart 5), as their affordability vis-à-vis detached housing has dramatically improved and investor demand has been on the rise.  This trend is likely to continue in the coming quarters as re-openings and return-to-office improve the attractiveness of urban centres.  A rising condo share will also be supported by ample available supply. Higher sales of these relatively inexpensive units should help restrain average home price growth. Note that this is the reverse of what happened earlier in the pandemic, when sales of relatively expensive detached units dominated, upwardly pressuring average home prices. 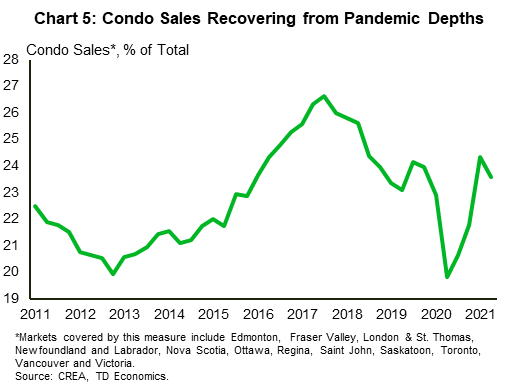 We expect sales to decline into the early part of next year, with only modest gains thereafter. Cooler demand conditions should also keep price growth contained. Note that the new stress test regulations will not only weigh on demand but could also cause a modest shift down the value spectrum for some purchasers, given that affordability has worsened by about 5% in the wake of the new rules.

On the supply slide, our forecast anticipates a pickup in new listings in the third quarter, reflecting elevated home prices and reduced COVID-19 fears. After which, growth in new listings should be flat, on average, through next year. When combined with the softer expected demand backdrop, markets are poised to become more balanced, supporting our call for slower home price growth through 2022. However, we acknowledge some risk to our near-term view, as listings have largely tracked sales since the beginning of the year. If they continue to do so, listings could decline in the third quarter, just as sales are expected to. This would leave markets tighter than we are anticipating in the near-term.

Regionally, average home prices have registered strong year-to-date gains, ranging from 6.7% in Alberta to 16.4% in New Brunswick. However, price growth has been weaker across nearly all provinces since March. Notably, prices have dropped across most of the Prairies, Ontario, New Brunswick and PEI. Meanwhile, they are only modestly higher in B.C., Manitoba, Quebec and Nova Scotia. The exception is Newfoundland and Labrador, where price growth has been strong since March.

Moving forward, we expect that quarterly price growth will strengthen in the Prairies, advancing at the fastest rate along with Newfoundland and Labrador. This reflects affordability conditions that are solid by historical standards. On the opposite end of the spectrum, weaker growth is expected in Ontario, Quebec, PEI and Nova Scotia, as affordability has become poor in these markets. We also think that a rising share of condo sales could weigh on average prices in Alberta, Ontario and Quebec, given that condos remain relatively cheap compared to other structure types in these regions.

B.C. and New Brunswick are likely to turn in middle-of-the road performances with respect to price growth, reflecting decent affordability conditions. In B.C., demand for condos has held up well and prices aren't as discounted relative to detached homes as in some other provinces. This implies less upside for condo sales relative to other structure types and in turn, less downside for average home prices.