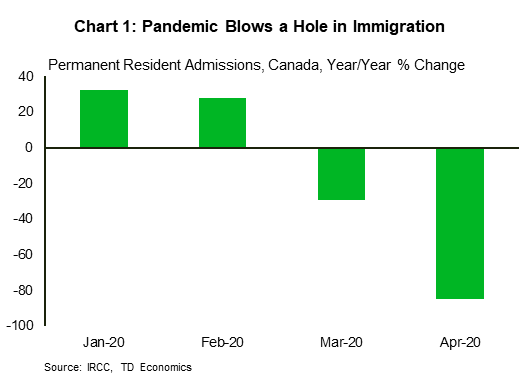 Population growth forms the fundamental basis for housing demand. From 2016-2019, Canada saw a tremendous expansion of its population base as federal immigration targets were raised, and a myriad of factors drove an historic intake of foreign students (see report). This underpinned home sales, drove robust demand for rental housing, and supported the fastest pace of homebuilding since the Global Financial Crisis.

More recently, however, the COVID-19 pandemic has thrown sand in the gears of Canadian population growth.  The national population count expanded by only 75k in the first quarter of the year – the weakest such gain since 2015. Higher frequency data points to a further significant slowing in the second quarter, as the number of immigrants arriving to Canada dropped by 80% year-on-year in April (Chart 1). While some of this setback is likely temporary in nature, we see the mix of ongoing travel fears, a pandemic-related slowdown in processing times for immigration applications, government travel restriction measures, and an only gradually healing global economy holding population growth well below its pre-virus rate of around 1.5% annually over the next few years. 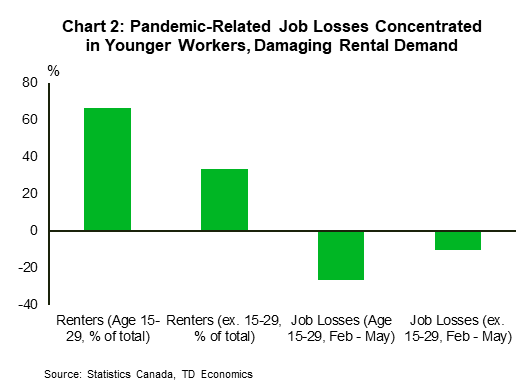 The population slowdown will exacerbate the hit to rental demand coming from the record job losses observed during the pandemic. These losses likely delivered a disproportionate blow to rental demand, given their concentration in industries with relatively low homeownership rates. In addition, a large share of younger workers has lost their jobs since the onset of COVID-19, and the tendency to rent is generally highest in younger age cohorts (Chart 2).

At the same time, rental supply has been increasing, both for purpose-built and investor-owned units (Chart 3). This is due to robust construction in recent years, the (probable) conversion of Airbnb units into long-term rental housing amid bans and weakness in tourism, and rising condo prices and rents during the past few years. The supply of condos for rent, in particular, has seen a rapid increase. The Toronto Real Estate Board reported a 30% year-on-year rise in these listings in the first quarter, continuing a trend in place since 2018. Moreover, industry data suggests that condo rental supply in the GTA was around 70% higher year-on-year in early June1.

With demand depressed and supply elevated, rents have fallen in markets such as Toronto, Montreal and Vancouver. According to the Toronto Real Estate Board, average rents for a two-bedroom condo in Toronto were flat compared to year-ago levels in the first quarter. Other data points to rent declines in April and May, both in the purpose-built market and for condos. In addition, the rent index in the Canadian CPI dropped 1.2% from February through May – compared to the modest gains that generally take place (Chart 4).

The good news is that job markets appear to have started a recovery from their April lows. However, it will likely take quite a bit of time – at least until sometime in 2022 – for employment to grind back to its pre-virus levels.  In addition, both immigrants and non-permanent residents generally rent upon arrival, choosing both purpose-built and investor-owned units. Much slower inflows of these newcomers will further weigh on rental demand moving forward, downwardly pressuring rents for purpose-built units. 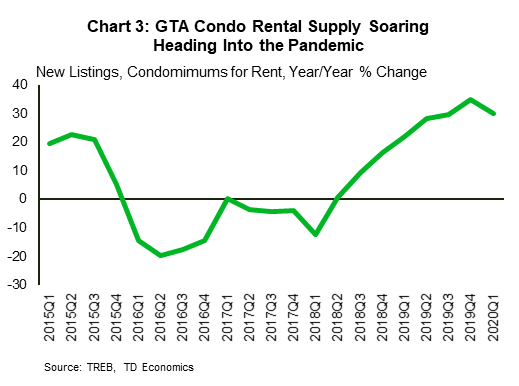 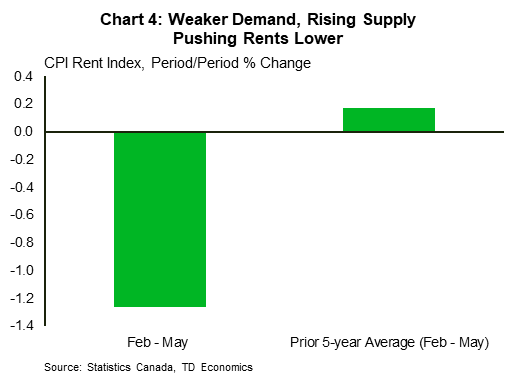 Meanwhile, investors whose units are slated to complete over the next few years will have a much tougher time finding tenants, partly on account of significantly slower population growth. At the same time, falling rents will raise the carrying costs of these properties, financially pressuring owners and likely causing some to sell. As the population slowdown lingers, demand for investor-owned rental units should drop, causing reduced sales. In these ways, weakness in the rental market will spill over into ownership housing.

Notably, condo prices have risen at a faster rate than their single-detached counterparts in recent years (Chart 5). In Toronto and Vancouver, for example, benchmark single-family prices increased by 37% and 14%, respectively, from the end of 2015 through May. Over the same time, condo prices in these regions surged by 76% and 49%. This suggests that condos could be more vulnerable to a price correction as demand falls in the wake of softer population flows.

Reduced Immigration To Have Lasting Impacts On Ownership Housing 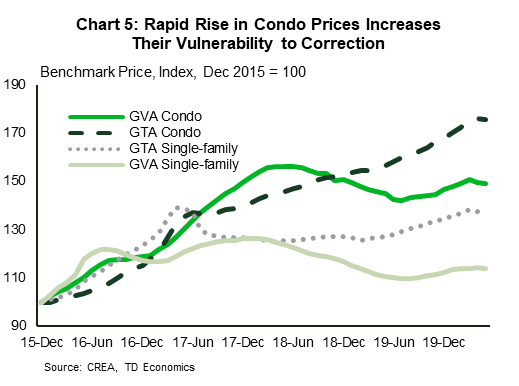 The slowdown in immigration will also have lasting impacts on the market for ownership housing. Although most immigrants rent initially, we still anticipate some impact on ownership housing demand through 2021. A 2019 study by Statistics Canada2 found that homeownership rates for recent immigrants (i.e. those that landed in the prior 5 years), have risen substantially over time (Chart 6).  It also found that homeownership rates of more established immigrants rise to roughly match those of the Canadian-born population. This analysis points to a relatively modest initial hit to ownership demand from softer immigration flows, with the impact building over time as homeownership rates rise.

Immigrants also tend to own more expensive properties than the non-immigrant population. Data from Statistics Canada indicates that in 2018, average assessed values for properties owned by recent immigrants were much higher than the non-immigrant population in Nova Scotia, B.C. and Ontario (Chart 7). And, this gap was even higher for immigrants living in Canada for a longer period, meaning that it was not simply a function of the rapid rise in home prices observed in some markets in recent years. This data suggests that (all else equal) weaker immigration flows would weigh disproportionately on average prices, which are influenced by more expensive properties. However, any impact would be modest initially before rising over time as homeownership rates increased. 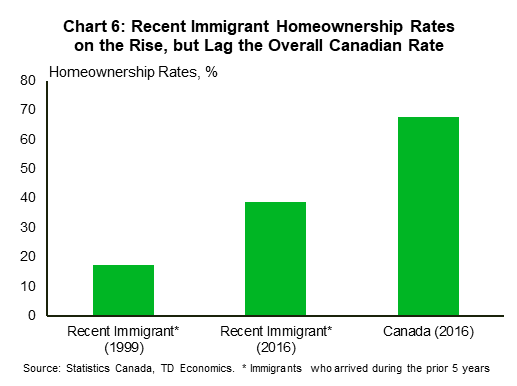 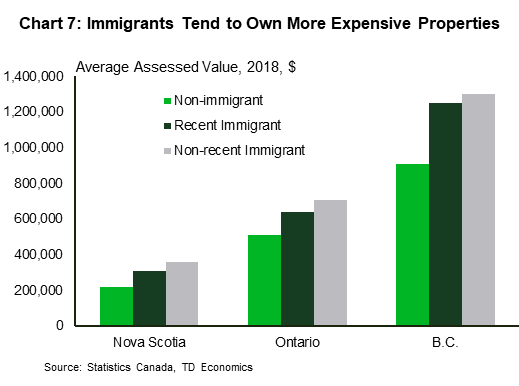 It’s worth noting that there could be some offsets to this dynamic, with some research3 suggesting the impact of immigration on home prices could be watered down by the out-migration of Canadian born residents from neighbourhoods where immigrants tend to settle. 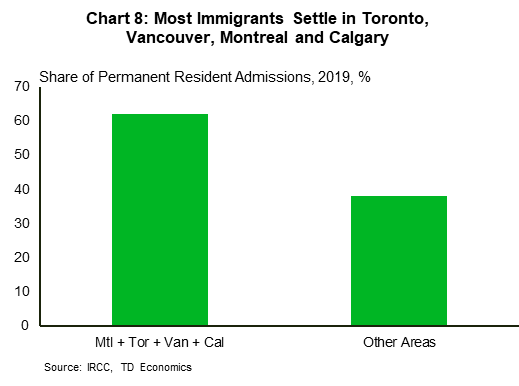 The impact of reduced immigration flows would vary across the country. Most immigrants tend to settle in Toronto, Vancouver, Montreal, and Calgary with these CMA’s accounting for over 60% of inflows last year (Chart 8). These regions also saw the largest slowdown in immigration over March/April, with levels down 60% year-on-year, compared to a decline closer to 50% in other jurisdictions. Moving forward, the largest blow to housing demand from an immigration slowdown would likely be imparted on these four CMAs, given their popularity as “landing pad” destinations. However, the impact on ownership housing demand would probably be smaller in Montreal relative to these other jurisdictions because homeownership rates, in general, are lower there. In contrast, the unemployment rate in Calgary will likely remain relatively elevated through next year. This should yield comparatively slower population growth and a larger hit to Calgary’s housing markets.

Even outside of these regions, lower immigration would leave its mark on ownership housing. Population growth has stepped up considerably across the Atlantic Region (except for economically-challenged Newfoundland and Labrador) since 2016, driven by immigration. What’s more, these provinces seemed to improve their retention of these newcomers. 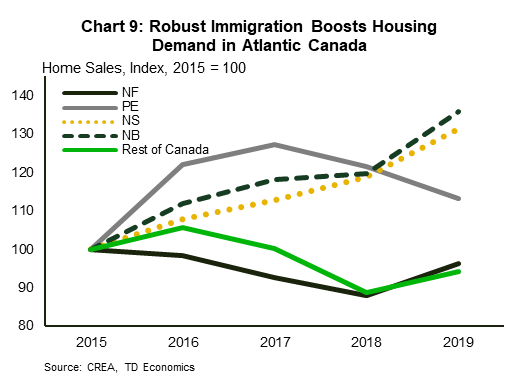 Home sales also grew robustly across most of the Atlantic Region during this time (Chart 9). Of course, it would be tough to chalk up all these gains to immigrant buying. More likely, the boost to regional economies, household incomes and job markets from the population surge gave significant support to housing demand. And, a slowdown in the immigrant intake would likely do the opposite.

Some survey evidence also points to immigrant homeownership rates being higher in the Atlantic Region compared to other jurisdictions in Canada. In addition, econometric analysis suggests that home sales in Atlantic Canada generally respond as aggressively to population changes as the larger provinces, and more so in some cases. And, recent immigrants make up a larger share of total immigrant owners in Nova Scotia, according to Statistics Canada. 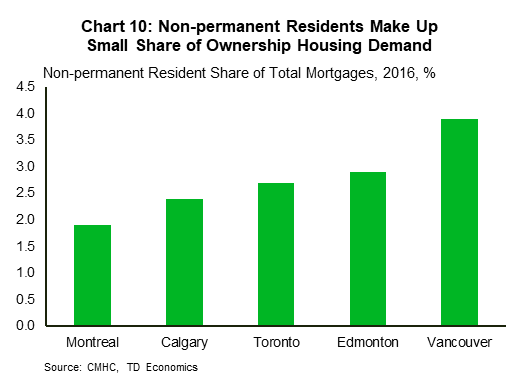 So, the direct hit to ownership housing from weaker non-permanent resident inflows should be quite muted. However, as noted above, rental demand will suffer a hit through this channel. This will feed back to investor-owners, weighing on housing demand, sales, and prices.

Past Population Growth Matters Too

As immigrant homeownership rates rise with a lag, demand for ownership housing will be supported by past population gains moving forward, partly offsetting the drag from weaker future inflows. As noted, population growth has been robust since 2016. And, some of the 1.1 million net immigrants who’ve arrived in Canada since then will make up part of the pent-up demand expected to power solid sales growth in the second half. This will, of course, depend on how many of these people were able to keep their jobs during the pandemic, as well as the speed at which they are re-hired. On the former, immigrants employed in full-time positions have seen larger job declines than those born in Canada during the outbreak (Chart 11), which will dull some of the pent-up demand coming from this cohort.

Also, of note, only 12k people emigrated out of Canada in the first quarter, marking the lowest such level since 2010. The extent to which the pandemic slows emigration should provide some modest offset weaker population inflows, as those who would otherwise be leaving the country stay in their current homes. 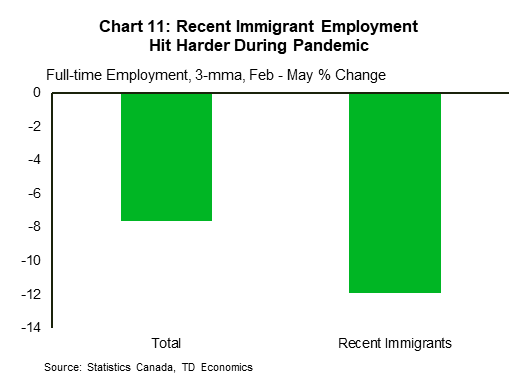 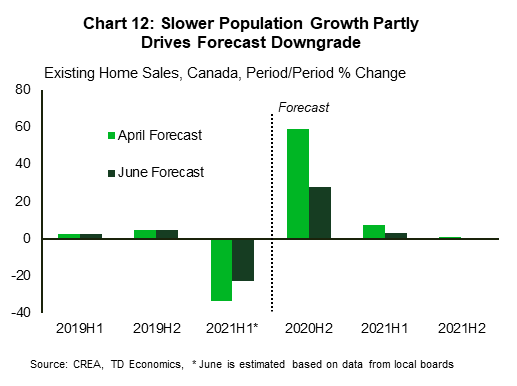 The pandemic-induced slowdown in population growth is expected to linger through at least 2021. Lesser inflows of immigrants and non-permanent residents will impact rental and ownership housing markets alike. The impact on the former will be more immediate while building over time in the case of the latter.

Weaker population growth will play a major role in slowing growth in home sales and prices through next year. Indeed, this dynamic explains about one-third of our downgraded view for Canadian sales growth through 2021, compared to what we thought in April (Chart 12). Meanwhile, other factors, most prominently elevated unemployment, account for the other two-thirds of the downgrade. These headwinds will offset various positives for the outlook, including the presence of significant pent-up demand, supportive demographics and low interest rates, resulting in modest price growth in the second half of 2020 and a mild decline next year.