To watch a Moneytalk interview on this topic, click here.

Much ink has been spilled on what should be done about rampant home prices in Canada, and much of this has been aligned to calls for more macroprudential measures to restrain demand via taxes or mortgage qualification. Maybe I have watched too many Big Bang episodes during lockdown, but the principle of Occam’s Razor should not be overlooked. That is, the simplest explanation, requiring the fewest assumptions, is usually the right one.

The sudden and steep drop in mortgage rates was the catalyst behind the jump in home sales and continued strength in demand. The central bank’s policy move did precisely what it was intended to achieve, even though it may now be proving counterproductive. It’s that simple. Trying to now halt or temper demand through a myriad of additional complex rules is not only inefficient, but also risks unintended consequences.

Let’s take a step back to review the stylized facts: 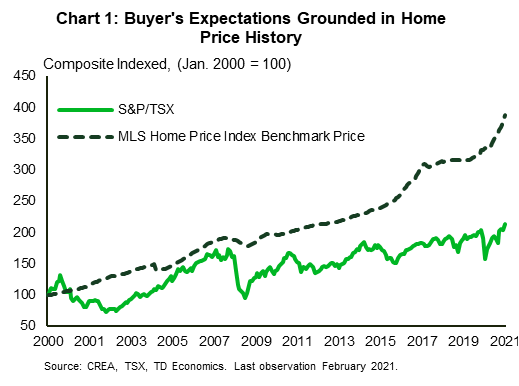 So, does this mean that all is perfectly fine? No. But it also doesn’t mean that buyers are necessarily behaving irrationally by thinking “if I don’t get in now, I’ll never be able to get in!” Let’s face it, housing has been a good bet for roughly 20 years (Chart 1). In an ironic twist, all those macroprudential policies over the years have added guardrails to make home purchases a better bet than the past. Mitigating more of the credit quality, investor and systemic financial risks, also mitigates volatility. So those buy-on-dip days may indeed be harder to come by. It does not mean that concerns over elevated indebtedness of Canadian households should be dismissed. High debt loads will pose a structural restraint on spending growth and enhance domestic vulnerabilities. But, it’s hard to deny that the past behaviour of housing is a reinforcement of a “buyer mentality.”

Canadians don’t shy away from housing debt because more and more people see it not just as an ownership opportunity and store of value, but as a path towards wealth creation that carries less volatility than investing in the stock market. And, this buyer rationale gets reinforced with Canada’s heavy lean on immigration targets that continue to be revised up, now at roughly 400,000 for 2021. The housing demand inflow continues to be ‘populated’ even within an aging demographic – more so than any other G7 country. New housing supply is working hard to keep up with the recent influx of population changes, but the composition of that supply has been disproportionately represented by multiple units, rather than the highly sought after detached home. If you go back to the 1970s when Canada experienced a similar period of strong population growth, the distribution of new housing supply was much more skewed to the detached market. And don’t forget, in most other countries in the world, 60% of the population does not settle within 200 kilometers of five major cities.

So, layering in more taxes as a means to “control” demand or price growth is probably not going to do the trick on any kind of sustainable basis. In fact, as Table 1 shows, Canada already collects more property taxes than Australia, New Zealand and some other countries where home price and credit growth are not quite as heated as here. With time, behaviours adjust if the supply imbalance has not been addressed. For instance, a home buyer in Toronto faces twice the land transfer tax as one in Mississauga (due to the city imposing a matching tax structure relative to that of the province). Yet, even before the pandemic, Toronto consistently demonstrated strong demand and price growth. If there is a case for taxes, it’s generally on secondary or speculative purchases. Or, should the government pursue taxes on the principle residence, it requires a firm commitment to dedicate that revenue stream to adding back supply and housing renewal initiatives.

We have to take this bull by the horns and apply solutions where they are most needed. Let’s start by getting timely, publicly available and accurate data on speculative, flipping and investor activity, so that policy responses can be right-sized. With this information, more strategic taxing of investor activity and multiple property owners may help to discourage speculation, but policy initiatives must be careful not to discourage productive investment activity that improves the existing stock and adds rental supply into the secondary market.

Second, governments have within their control an ability to reduce barriers and influence new construction, create more affordable rental or rent-to-own supply, while also ensuring that investment commitments are in place for upkeep and quality control.

Third, there’s always an opportunity to improve the current system, but it need not always lie in the hands of the national regulator and the federal government. A review of local market practices should occur to ensure that a seller’s market doesn’t turn into a runaway market due to practices that can jawbone buyers, like price-baiting or gaming the lack of transparency on the bid process. When the Bank of Canada notes that the Greater Toronto Area sold roughly two-thirds of the homes for more than the listing price in February 2021, how much of this behaviour captured strategic pricing outcomes? Here’s an anecdotal experience on this concept. On Tuesday, I noticed a house relisted after just six days on the market. The new list price was not lower, as logic might dictate. Rather, it went up by more than $250,000. And this wasn’t the first time I’ve seen this happen. Why did the price go up? Probably because the initial attempt to draw multiple bids didn’t work. Had it, this would have been recorded as a home that sold “above list”. It might have also drawn in an even larger bully bid that would have reset the neighborhood price benchmark.

With so many dynamics at play, I return to the principle of Occam’s Razor. The quickest route to cooling this market and squeezing out speculation comes down to the interest rate channel, and therein lies the solution. Canada had one of the larger downward movements in mortgage rates relative to other countries, and the current monetary stance may no longer be appropriate for this segment of the market. Regardless, eventually demand will respond to the erosion in affordability that comes with heated price gains. There are some natural limits that will kick in due to those guardrails already in place on borrower limits and mortgage qualification stress testing, unless that behaviour finds an escape route into less regulated segments of the market.

By now, you must be wondering when I’m going to thread in my Big Bang reference to Schrodinger’s Cat. Sheldon introduced this concept to Penny (and the non-physicists watching the show) as a thought experiment where a cat can be both alive and dead as a result of an event that may or may not have occurred. The answer is known only upon observation. To that I suggest thinking of Canada’s housing market as being both speculative and fundamentally sound. Bazinga!