We are living in extraordinary times. The collapse in economic activity and the massive risk-off move in financial markets will be featured in textbooks for years to come. Though the decline in equity markets garnered a lot of attention, financial stress was apparent in other markets as well. Specifically, corporate credit and short-term funding markets. To grasp the magnitude of the stress, we compare it to past historical episodes. This framework will be regularly updated to help our clients understand the evolution of financial market risk. Note: This publication will be updated periodically to reflect notable changes in financial market sentiment. 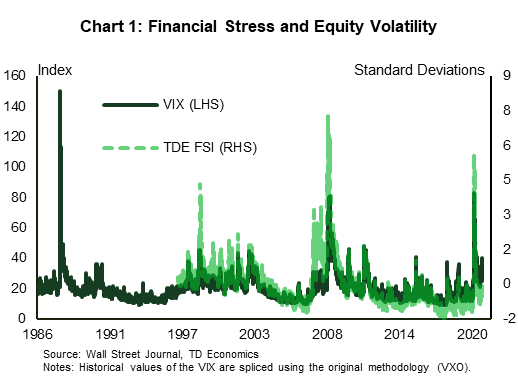 It took just 22 trading days for the S&P 500 to decline by 30% over the February to March time period. The speed of the decline is why the Volatility Index (VIX) increased so dramatically, eclipsing the level from the Global Financial Crisis (GFC) in 2008 (Table 1). With a peak of 83, it is the second highest level ever recorded, but still well shy of the all-time level of 150 reached during the stock market crash of 1987 (Chart 1).

Though the speed of the decline has few comparables, the depth of the decline is right in the middle of what we have seen in past recessions (Table 2). In the post-WWII time period, the average S&P 500 Index decline during recession was 29.5%. More recently, in the GFC and bursting of the tech bubble, the S&P 500 declined 56.8% and 49.1%, respectively. The point here is that even though the VIX reached GFC levels, the stock market did not perform as poorly. This likely has to do with the massive injection of central bank and government support this time around, which has been far more proactive at the onset of the stress than past cycles. It’s also why our Financial Stress Index (in Chart 1) had not spiked as much as in the GFC. 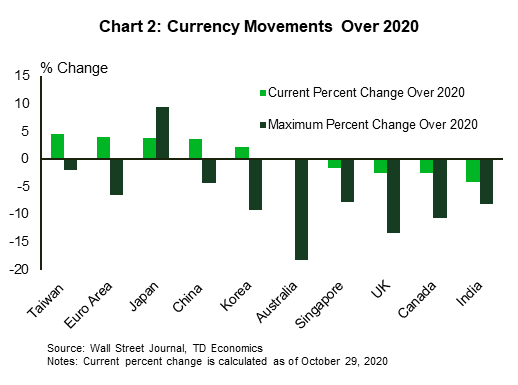 When we look at other international equity markets, it is easy to see high cross-asset correlation, with most markets experiencing peak-to-trough declines of 30%, on average. That said, compared to the U.S. market, the S&P/TSX Composite was relatively weak, reaching a peak-to trough decline of 37.4% (Table 3). The high energy sector weight had a large impact on the Canadian market relative to the U.S. This weakness was also apparent in the Canadian dollar, which deprecated by 11% at the worst point in the crisis. We find that commodity and/or export focused currencies (such as the Australian dollar) were the hardest hit over the stress time period. (Chart 2 and Table 4). Since that time, the Canadian dollar has been improving significantly on the back of improved sentiment and rising commodity prices.

North American financial market sentiment had been upbeat over the April to August time period, with central banks communicating a lower for longer interest rate environment. This coincided with economies around the world gradually reopening and strong job growth leading the way. Over the last couple of months, however, risk assets have suffered, with uncertainty surrounding the upcoming U.S. election, a stalemate in congress over additional fiscal stimulus, and new COVID-19 infections rising around the world all weighing on risk sentiment.

Foreign exchange markets had seen strong flows out of the U.S. dollar over the summer months with the economies that were furthest along in their re-opening phases experiencing the greatest appreciations relative to the greenback. The renewed risk-off activity in financial markets over the past two months has seen the U.S. dollar strengthen against most currencies with the Australian dollar, euro, and pound experiencing notable depreciations. 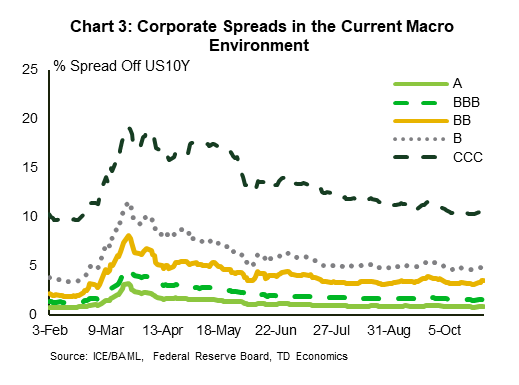 Even though we are in the midst of the recovery, there had been growing concern about the second-round impact from corporate credit markets. We have been warning about rising levels of corporate debt around the world for some time. Declining revenues have increasingly challenged the market’s view on the ability for businesses to service debt payments. This led to a wave of credit downgrades and rising credit spreads in the first half of the year (Chart 3). This was especially concerning for the lowest grade credit borrowers (CCC and lower), where the spread to government bonds doubled in the beginning of the year. Investors were demanding a 17% to 19% premium for investing in such credit instruments. This compared to 20.1% during the oil shock of 2015 and 43.8% during the financial crisis. There has been reprieve on this front, with CCC spreads coming in significantly from their peak, but remaining historically high.

The Federal Reserve widened the credit ratings of corporate bonds it will buy to include recently downgraded corporate bonds that have a rating no lower than BB-, as well as ETF’s that have exposure to eligible non-investment grade corporate bonds. The announcement paid immediate benefit, as BB spreads have declined close to 3% since April 8th.

The investment grade space has been strongly supported by the Federal Reserve announcement that it will purchase investment grade credit and ETFs of investment grade bonds. This market, especially in the lower rated BBB issues, had been under pressure. Since the Fed announcement, the BBB spread has narrowed. The Fed measures are likely the reason why the BBB bond spread only reached a max of 4.80%, below the GFC spread max of 7.52%. 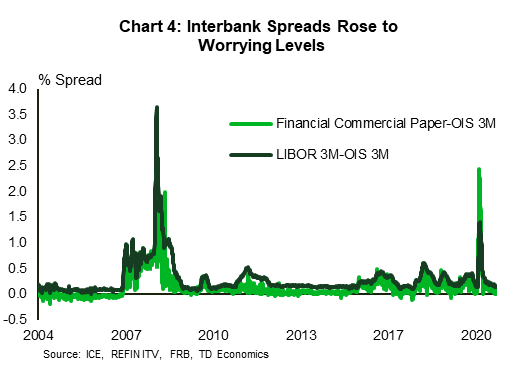 Known as the plumbing of the financial system, the short-term bank funding market doesn’t get the attention it deserves. But those that lived through the financial crisis remember it all too well. When commercial banks and non-financial corporations found themselves in liquidity trouble in 2008, the rate on short-term borrowing soared. We measure this by comparing 3-month LIBOR to the OIS rate and the Commercial Paper rate to OIS. The LIBOR-OIS spread reached 365 basis points at the peak in 2008, and the Commercial Paper spread reached 284 basis points. We can see in Chart 4 that these rates shot up again early in 2020, with 3-month LIBOR-OIS and Commercial Paper-OIS reaching a high of 140 basis points and 244 basis points, respectively. The Federal Reserve stepped into these markets, and we have seen dramatic improvement as the LIBOR-OIS spread narrowed significantly. The central bank will continue to provide cash and liquidity needed in order to ensure the continued functioning of the financial system.

The sudden stop to economic activity was unprecedented. So too had been the speed of the decline in risk assets. Equities, credit, and funding markets all exhibited heighten levels of financial stress, though the depth of the stress has been right around what we see in a typical recession. Since that time, there has been a strong reversal in risk sentiment which has favored risk assets. But as COVID-19 infections are now starting to rise again, we are watching out for pockets of financial stress reemerge.

As the narrative continues to evolve, we want to make sure you have an accurate perspective of the financial market landscape. We are closely watching how this evolves and will use this platform to provide you with updates.