Canadians To Get a (Short) Break From Rising Debt Service Costs 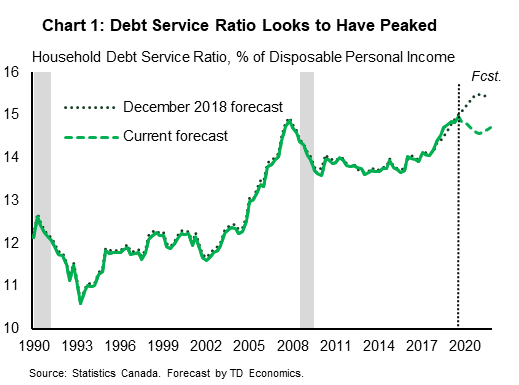 As we look back on the year that was, one of the biggest surprises was the movement in interest rates. Rather than rising, interest rates fell in 2019. The decline in rates came without any help from the Bank of Canada, which held the overnight rate steady through the year. Rather, global events and worries about trade wars and recession pushed Canadian yields down.

The fall in government yields has passed through to mortgage rates and supported a rebound in home sales and home prices. Yet, for most Canadians households, the decline in rates has had little impact. Indeed, the debt service ratio – the share of disposable income that goes toward servicing existing household debt – rose through this year, hitting 15% in the third quarter of 2019 – the highest level on record (Chart 1).

The good news is that the outlook for 2020 is brighter on this front. The debt service ratio should start trending lower in the coming quarters, as the decline in rates over the past year flows through to households. And, with the Bank of Canada likely to cut its policy rate next year, households should also get a break on their unsecured debt burden. All told, we expect the debt service ratio to fall by roughly 30 basis points by the end of 2020, reversing the increase over the past year.

Lower rates only lifting a handful of boats

One of the biggest contrasts between 2019 and the previous two years was the movement in interest rates. As steadily as rates moved up through 2018 (alongside the Bank of Canada’s overnight rate), they did the opposite this year (even as the Bank of Canada held steady). At the longer-end of the yield curve – from the 5-year through to the 10-year – Canadian government bond yields fell close to 90 basis points from their peaks in late 2018. Mortgage rates moved down in tandem, with rates on new mortgages falling about 80 basis points (Chart 2).

Lower mortgage rates have given a boost to the housing market and led to an acceleration of mortgage credit growth. Still, the majority of Canadians have not felt much relief. Indeed, the debt service ratio (DSR) hit an all-time high in the third quarter. The increase in the DSR over the last year was split between increases in the mortgage DSR (up 0.11 percentage points) and the non-mortgage DSR (up 0.15 percentage points). In the case of the mortgage DSR, all of the increase and then some was due to higher interest costs, as the share of income going toward principal repayment fell. As for the non-mortgage debt service ratio, both the interest and principal components of the DSR rose, but rising interest payments made up the majority of the increase. 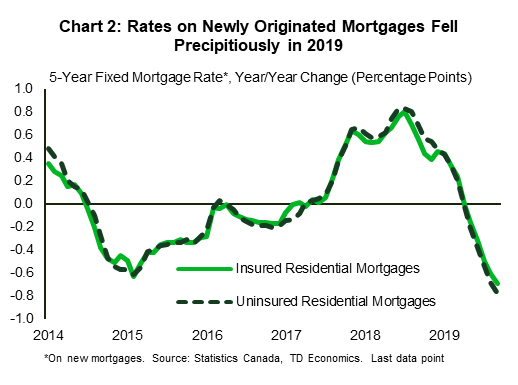 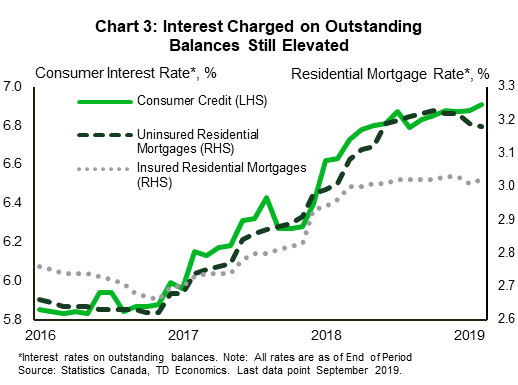 The rise in the debt service ratio may seem hard to square with the move lower in market interest rates. A few points are important in understanding this divergence: 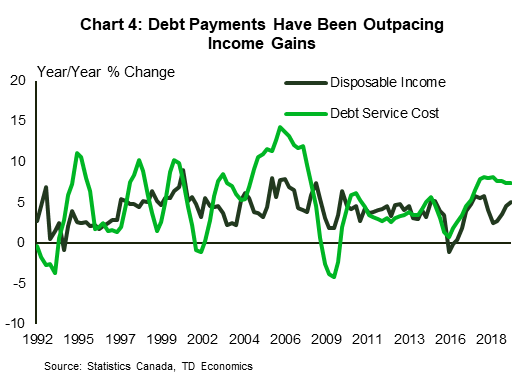 As a result of these dynamics, growth in debt payments has outpaced disposable income this year, pushing the debt service ratio to an all-time peak (Chart 4).

Pressure from higher rates to ease in 2020

The rise in debt service costs over the course of this year has not come as a surprise to us. A year ago, we wrote about the likely increase in the DSR to new historical levels, and this expectation has come to pass.

Looking ahead, however, Canadians should get a break from rising borrowing costs in 2020, something that we didn’t expect to see a year ago. Based on the lagged relationship between market rates and interest rates paid on outstanding debt, the debt service ratio is expected to fall by about 30 basis points from current level to about 14.7% by the third quarter of next year. This would translate into around $300 in savings per households on average. However, as roughly 30% of Canadian households are debt free, for the remainder, the savings gross up to close to $450 over the course of next year.

There are a few important assumptions in this analysis. The first is that the Bank of Canada cuts the overnight rate by 25 basis points in the first half of this year. With at least one rate cut, we expect minimal upward movement in five-year mortgage rates from today’s level. Without this cut, however, interest rates on variable rate products would remain at current levels and rates on fixed rate products would move up by 20 to 25 basis points next year due to the anticipated backup in global yields. Should this be the case, the improvement in the DSR would be cut in half and its staying power would be cut short.

A second assumption is that household credit growth does not accelerate materially going forward. We expect mortgage credit to grow by 4.0% and consumer credit to advance by 2.5% in 2020. If instead it re-accelerates to the close to 6.0% growth experienced from 2015 through 2017, the DSR would hardly budge – even with lower rates – as the increase in debt burden offsets lower rates.

Finally, even with interest rates edging lower next year, we do not expect them to remain at that level indefinitely. Assuming the global economy avoids recession, Canadian bond yields should begin to move higher over the course of 2020 and 2021. As they do, they are likely to bring debt service costs higher with them. Given the assumptions above (one Bank of Canada rate cut and modest credit growth), we expect the ratio to begin turning higher in 2021.

A lot can happen in a year. At roughly this time last year we were expecting the Bank of Canada to raise rates in 2019. However, the intensification of the U.S.-China trade war, the continued slowdown in global growth, and the negative impact on Canadian investment has kept Bank of Canada on the sidelines. At the same time, bond yields have declined precipitously on the more pessimistic global outlook, with mortgage rates following suit.

The decline in rates has been a boon to housing, new mortgage borrowers, and those able to refinance, but has not done much to change the borrowing costs of existing debt holders, which have continued to rise through this year. The rise in debt servicing costs relative to income has led to the soft pace of consumer spending over the past year and no doubt contributed to the rise in personal insolvencies.

By the same token, as this year’s lower rates continue to feed through to borrowers renegotiating loans over the course of 2020, we should see a modest reprieve in debt service costs. This should give a break to households and alongside recently-announced tax cuts, should help support a modest acceleration in spending growth over the next year.