Cryptocurrency: Not a Safe Haven in 2022 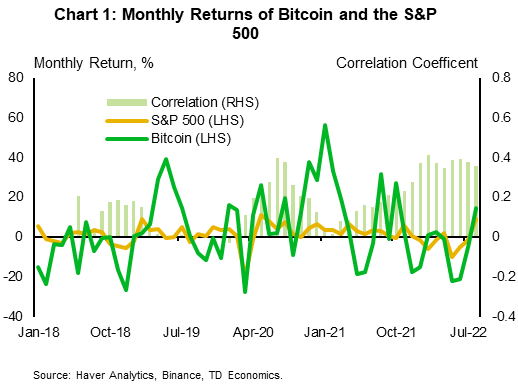 Cryptocurrency has been touted as a hedge against macroeconomic risks and inflation. Proponents of cryptocurrency have argued that fiat currency is vulnerable to being devalued through inflation, especially when central banks “print money” to support the economy. It is common for cryptocurrencies to be designed to remain scarce as their demand increases, theoretically bolstering their value.

Throughout much of 2018 and 2019, major cryptocurrencies were able to offer both meaningful positive returns to their investors and appeared somewhat uncorrelated with broader equity markets – that is to say, it appeared possible that cryptocurrencies might deliver on their promise.

This independence not been maintained over the course of 2022 (Chart 1). From the start of the year to its trough in June, the S&P 500 fell over 20%. Despite rebounding over the summer, it is still down over 13% as of writing. Cryptocurrencies have corrected alongside equities. Since January major cryptocurrencies have fallen by over 50%.

The move higher in the correlation between equities and cryptocurrencies appears to be related to the shifting economic backdrop. Cryptocurrencies have shown lower correlations with equity markets in times of stable and high economic growth and low interest rates. But in more precarious and uncertain economic times, such as the present, they have moved in the same direction as the stock market.

The Cryptocurrency Market is Highly Concentrated and Highly Correlated

The cryptocurrency market remains highly concentrated despite the proliferation of more than 15,000 coins since the popularization of Bitcoin. Together, Bitcoin and Ethereum made up close to 60% of the market cap of the cryptocurrency universe in August 2022. 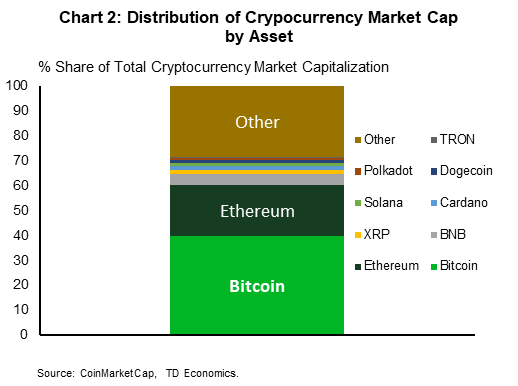 Chart 2 illustrates how much larger Bitcoin and Ethereum are compared to a selection of seven other cryptocurrencies which have been among the next largest coins for much of 2022. These are Binance Coin, Cardano, Ripple, Solana, Dogecoin, Polkadot, and Tron. The smallest of these in August 2022 is TRON, which has a market cap of around $US 500mn, compared to the roughly $US 450bn market cap of Bitcoin. The exact rankings fluctuate with the prices of cryptocurrencies, which of course are volatile. For example, TRON had almost double its 1% share of the total cryptocurrency market cap a few months ago.

Not only are Bitcoin and Ethereum the largest assets in the class, they also appear strongly correlated with the other cryptocurrencies. Chart 3 shows how the smaller players in the market all generally exhibit a high correlation with the dominant players, Bitcoin and Ethereum, using the daily returns in these markets. In other words, an investor in this market would have difficulty diversifying their risk. 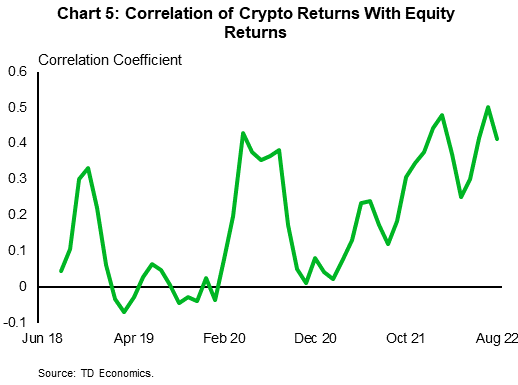 Of course, these correlations are not constant over time. Chart 5 shows the rolling 4-week correlation of the average of these cryptocurrencies against the S&P 500, the index with which it has generally shared the highest correlation with. Here, we see that the correlation has been rising during the recent market correction, and has had periods of seeming independence – notably, during the relative boom years prior to the pandemic, and during the recovery from the pandemic.

A turning point in the correlation of cryptocurrency with equity returns looks to have occurred in 2021, around the time the economic environment began to shift to one of higher inflation and weaker growth.

The increase in correlation also lines up with greater misses by forecasters. To see the extent of economic surprises, we use the Federal Reserve Board of Atlanta’s Survey of Professional Forecasters, which aggregates professional forecasters’ views of the economy in the near-term. We compare the forecasts for the next quarter to the realized data over the last several years.

The results are illustrated in Chart 6: the uptick in the correlation of cryptocurrencies, which began in the second quarter of 2021 was a turning pointing for the U.S. economy. After this point, growth surprises became more consistently negative, inflation surprises became much larger, inflation itself rose much higher, and expectations for future interest rates moved up considerably. 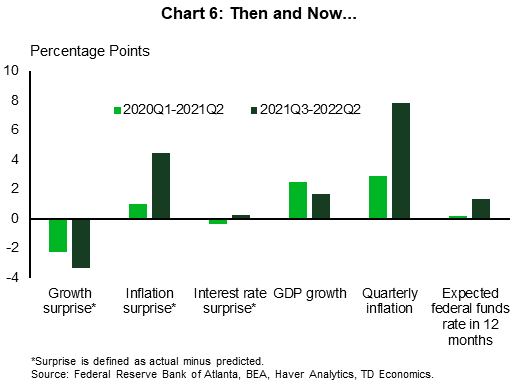 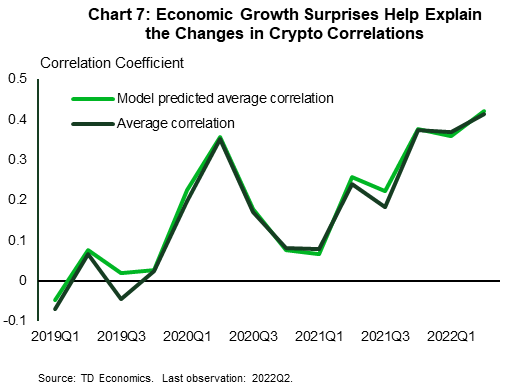 To understand the drivers of the correlation between cryptocurrencies and equity markets, we construct a model, using a variable selection algorithm to determine the specification. The results are shown in Chart 7.

Cryptocurrencies have shown the highest returns and greatest independence from other asset classes when economic growth has been strong, interest rates have been low, and the economic environment has had limited surprises. As a corollary, the asset class has exhibited extraordinary weakness this year, in an environment where the opposite has been true.

As a caveat, our history is short – the largest coins have been around for about a decade, and the cryptocurrency market has evolved considerably every year. The current form of the market, where Bitcoin and Ethereum are dominant players, but new entrants can repeatedly emerge, attract investors, and gain significant market share, took hold in the last five years or so. We only have the end of the last expansion and the pandemic period to base our analysis on. In that time, cryptocurrencies have not had stable relationships with fundamental factors, and new forms and flavours of cryptocurrencies continue to develop. The experience of the past year suggests that cryptocurrencies, like equities, are a growth-linked asset and investing in them is an investment in future economic growth, albeit more volatile than investments in other growth-linked assets.

It is possible that future innovations in this area will lead to a crypto-asset which can function as a safe store of value and hedge against economic risk for its investors, but that world is difficult to see today. Right now, they look like an asset class that depends on the same factors as other risk assets.