Adding Another Layer of Risk 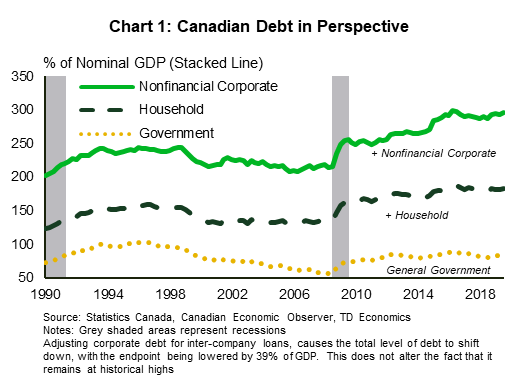 Economists are often asked, “What keeps you up at night?” The answer given over much of the last decade has been elevated debt levels, particularly when there’s a deviation from historical experiences. Regular readers of our publications are aware of how Canadian mortgage and consumer debt are two of the biggest risks weighing on our economic outlook. What doesn’t get much attention in Canada is the high level of nonfinancial corporate debt.1 This debt has risen rapidly over the last decade and is well above previous highs (Chart 1).

In fact, nonfinancial corporate debt is high also when compared to international peers. According to the Bank for International Settlements (BIS), Canada’s nonfinancial debt-to-GDP ratio of 118.7 percent ranks third amongst G20 countries, trailing only China and France (with debt-to-GDP ratios of 154.5 and 154.1 percent, respectively).2 This adds another layer of risk to an already credit constrained Canadian economy. In the event of an economic downturn, corporate indebtedness could result in widening corporate bond spreads and increased delinquency rates, which would amplify the severity of a downturn..

The above analysis examines total debt levels without taking into consideration the amount of cash that corporations are holding. Some have argued that corporations are flush with cash, which would go a long way in helping firms meet their financial obligations in the event of a slowdown. While cash levels have risen significantly over the past few years, debt has grown at an even quicker pace. After adjusting the level of debt for cash holdings, the resulting net-debt to GDP ratio is lower, but still marks a historical high (Chart 2). Even if we take the Bank of Canada’s (BoC) measure of corporate debt, which subtracts inter-company loans, the net-debt to GDP ratio that has risen substantially over the current cycle and is right around historic highs (see Appendix). This cash buffer does provide some level of cushion, however the historically high levels of net debt still warrant caution. 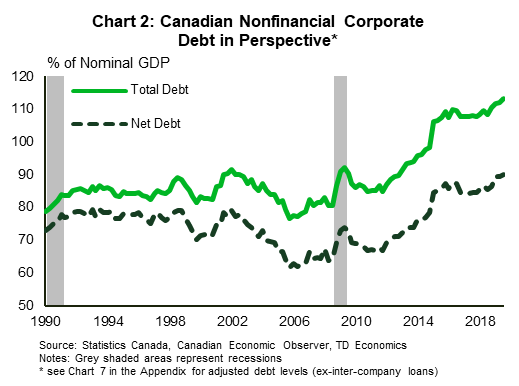 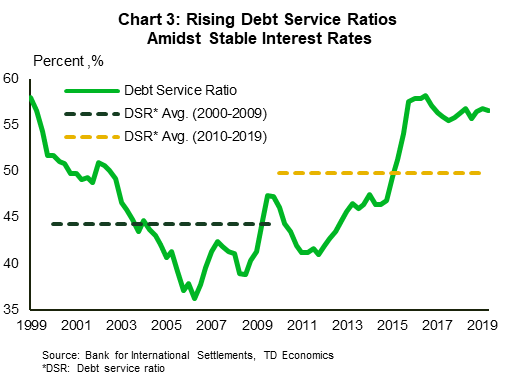 The Rising Share of Income Going to Service Debt

The current economic expansion has been a boon to corporations, with profits consistently outpacing nominal GDP. At the same time, interest rates have been on a downward trajectory. These two factors have made debt more affordable. Even with these fortunate developments, the cost of servicing debt as a share of income for Canadian nonfinancial corporations has continued to increase. The corporate DSR as defined by the Bank for International Settlements (BIS) as interest and amortization relative to income, is currently 56.6 percent and close to historic highs, while being above the average over the previous two decades (Chart 3). Put another way, since the early 2000s, a higher share of corporate income is going to servicing debt, even as profits have increased and interest rates have declined. 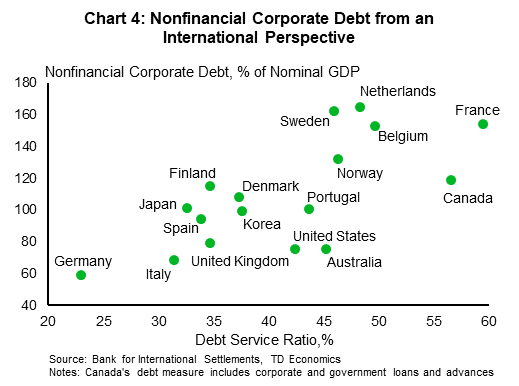 When we compare Canada’s DSR to that of its international peers, Canadian firms are in an unfavorable position (Chart 4). The DSR has increased at a greater pace than any of its peers since the beginning of 2011 and is one of the highest in the developed world. The current DSR is comparable to that of Australia and Belgium in 2016, Norway in 2012, Japan in 1999, and Portugal in 2009. However, it does not reach the elevated levels experienced by Spain in 2007 and Korea in 1999 (at 67.1 and 75.5 percent, respectively).3

It is important to note that not all debt is the same and international comparisons do not adjust for the amount of inter-company loans. In the event of a downturn, the refinancing or cash flow pressure coming from this form of debt is less than that of bank loans or corporate bonds. In Canada, corporations have a higher tendency to borrow inter-company. Even still, the story remains the same. When adjusting for loan type, corporate debt is right around historical highs.

The Industries that are Accumulating Debt

With aggregate nonfinancial corporate debt elevated, it is important to breakdown debt by sectors to see if debt accumulation is widespread or concentrated within a few industries. We find there are specific sectors where debt is concentrated – with Real Estate, Manufacturing, and the Oil & Gas sectors accounting for approximately 45 percent of total nonfinancial corporate debt.4 Even when adjusting for the level of cash holdings, debt levels in these industries remain elevated and are well above their respective averages over the current economic cycle. 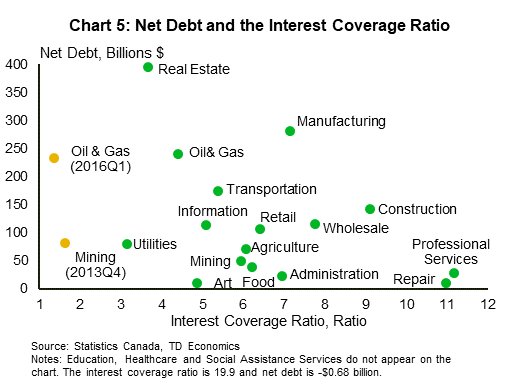 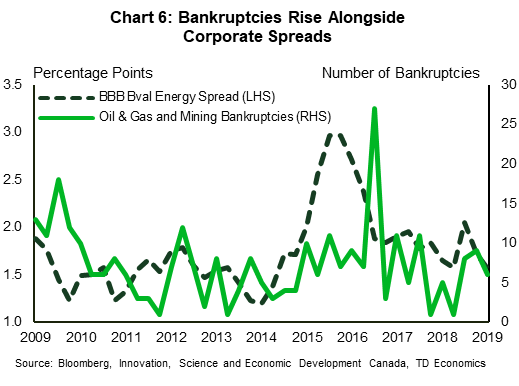 Using History as a Guide to Assess Vulnerabilities

History shows that elevated debt levels coupled with low interest coverage ratios could make firms vulnerable to adverse economic shocks. Evidence of this can be found by looking at the Oil & Gas sector between 2014-2016. During this time, oil prices declined by 71.3 percent, reaching levels well below breakeven prices.  Subsequently, operating profits and the interest coverage ratio declined, reaching all-time lows in 2016Q1. This led to widening credit spreads and a spike in bankruptcies (Chart 6). Real Estate is another sector worth watching. From 1989 to early 1990, the real estate industry was under stress as home prices declined by 12.7 percent peak-to-trough. Subsequently, both operating profits and the interest coverage ratio declined, causing bankruptcies to spike higher.7

Determining which Creditors are Exposed

When we look at the composition of nonfinancial corporate debt (who loaned the corporations the money), it has remained relatively unchanged over the current business cycle with loans accounting for a greater share of debt. With debt service costs close to historic highs, debt holders are more exposed in the event of a profit squeeze.

The BoC has also taken note of nonfinancial corporate indebtedness and has identified some emerging trends in its Financial System Review. With respect to corporate bonds, the BoC notes that an increasing amount of debt issuance is coming from firms in the non-investment grade space. The limited market for non-investment grade issues in Canada has forced a number of firms to issue in US dollars, causing the share of US dollar denominated bonds to increase from 40 percent in 2007, to approximately 60 percent in 2018.8

In addition to the increased issuance of non-investment grade corporate bonds, the BoC notes that more Canadian firms are tapping into the US leveraged loan market. The value of leveraged loans held by Canadian firms has increased more than two-fold to $175 billion over the past four years, with close to one-third of these loans being covenant-lite. Leveraged loans and high-yield bonds combine to account for over 12 percent of nonfinancial corporate debt.9 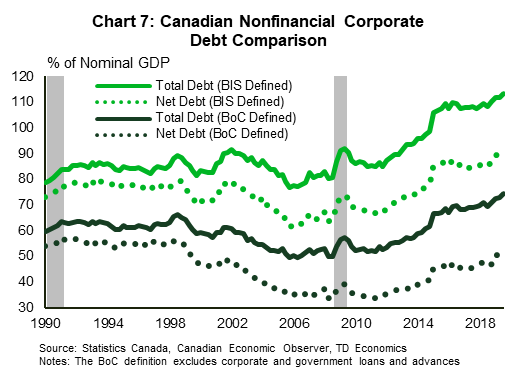 The rise of nonfinancial corporate leverage in Canada is an emerging risk. An increasing share of corporate income is being directed towards servicing debt. This debt service ratio has been on the rise in Canada. Should the economic backdrop deteriorate, the level of corporate indebtedness could act as an amplifier and increase the severity of a recession. This would result in increased delinquencies and tighter credit conditions, which would intensify the negative headwinds facing business investment and labour markets. All told, nonfinancial corporate debt adds one more layer of risk to the Canadian economy.

In Chart 2, we show the amount of corporate debt as a percentage of nominal GDP (both gross and net of cash). This data includes all forms of corporate debt. It has been debated whether certain forms of debt should be subtracted from the total in order to provide a clearer picture of the debt levels in Canada. There is a substantial level of inter-company loans in Canada, due in part to the cross boarder nature of businesses in Canada. The Bank of Canada, in a Staff Analytical Note, argued that subtracting inter-company loans may provide a clearer picture of debt (Duprey et al (2017)). As evidenced in Chart 7, though the debt level is reduced when making this adjustment, it is still on the rise and revisiting historical highs.