Wheat prices have been on a sharp descent since their peak in May (down 35%), and have fallen below pre-invasion levels (Chart 1). The steep fall in prices reflects several factors. Notably, demand estimates have been cut partly due to higher prices causing a substitution to corn in animal feed, rising interest rates raising the opportunity cost of investments in commodities, and a strong U.S. dollar. Moreover, the fear premium related to shortage concerns has narrowed sharply.

Most recently, budding optimism on the UN-backed deal to free up Ukrainian wheat trapped in Black Sea ports sent prices on another leg down as grain flows started in early August. Ukraine is the world's third largest exporter of wheat and is the so-called "breadbasket of Europe". Despite the UN-backed export agreement, there is still much uncertainty around supply in the short term, as the signatories grapple with the logistics surrounding implementation, and uncertainty around Russia's credibility in respecting its terms – especially after Russia attacked the Port of Odessa a day after signing the deal. Not surprisingly, futures prices jumped nearly 4% on the news of the attack. 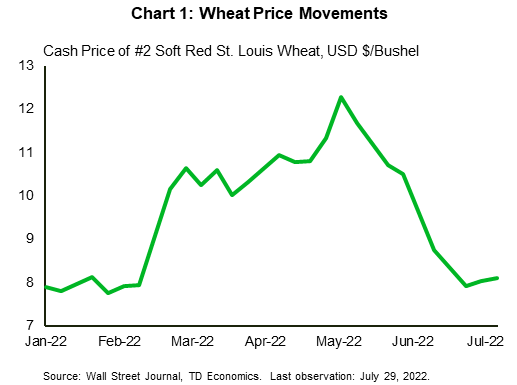 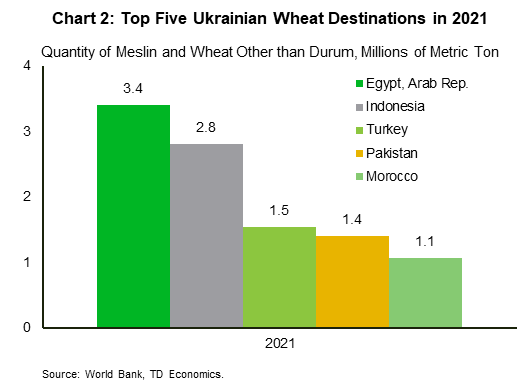 The multilateral pact would unlock the primary export channel for Ukrainian wheat. Currently there are roughly 20 to 25 million metric tons (MMT) stored in Ukrainian silos, containing wheat, corn, and fertilizers that need to be exported before the grains spoil. Freeing up the additional supply of wheat and corn would help to alleviate fears of food security issues amid concerns of a global food crisis, especially in Egypt, Indonesia, and Turkey (Chart 2). Looking forward to 2023, persistently high input prices (particularly for fertilizer) risk reducing yields at a time where ample uncertainty around supplies remains.

Assuming Russia makes good on the deal, the potential for additional wheat shipments from Ukraine through the Black Sea should help supply-demand balances and likely pressure prices even lower in the coming months. Prices soared in May partially in response to expected global decreases in production – the USDA estimated the decline at 15 MMT (Chart 3). However, ahead of the agreement, market conditions had been loosening. Global supply and production fell but so did demand expectations following a substitution of corn for wheat in animal feeds.

Global wheat markets are starting to move towards the balanced levels seen pre-war. Overall wheat demand is estimated to be slightly higher than supply in 2022. The USDA estimates global wheat production to be 771.64 MMT for 2022, eight MMT lower than the previous year. Although supply is down relative to the previous year, signs are pointing to good yields in both Canada and the U.S. Total demand is estimated to be 784 MMT for 2022, slightly higher than global wheat production, but about 7 MMT lower than the year prior. However, the USDA estimates do not take into consideration the new deal that will free up wheat in Ukrainian silos. 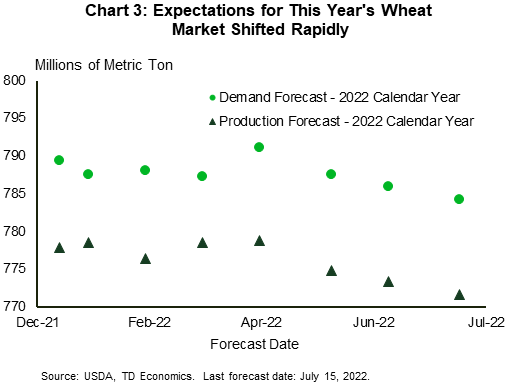 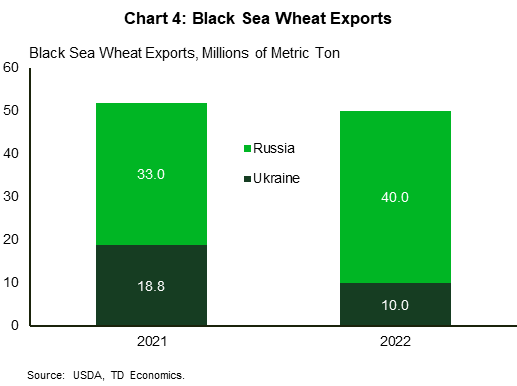 Ukraine's exports, excluding the lift from the new deal, through the Black Sea are estimated to be 10 MMT this year, down from 19 MMT (Chart 4) from the year before. Russia, however, is expected to increase its wheat exports in 2022 to 40 MMT, up from 33 MMT the year before, based on USDA's World Agricultural Supply and Demand Estimates report. As such, Ukraine's decrease in exports is projected to be nearly offset by increased supply from Russia. The UN-backed arrangement could add an additional 5 MMT1 through the Black Sea for the remainder of the year. This equates to about 10% of total wheat shipments through the region. If Ukraine can increase exports, the additional 5 MMT will help to balance global demand in the near term and sustain lower prices. 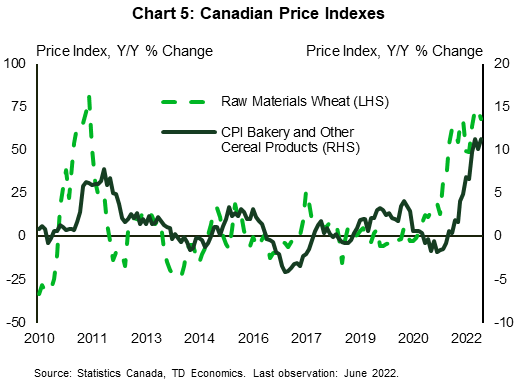 Lower wheat prices will come at some expense to farm incomes around the world. While consumers stand to benefit, hopes for significant immediate relief in food price inflation are likely to be dashed. Case in point, food is 15% of the CPI basket in Canada, but only around 1.5% of the basket is made up of bakery and cereal products which is the direct linkage to inflation. Wheat is also an input into animal feed, so slower price growth could indirectly help lower meat prices that account for 2.1% of the Canadian CPI basket.

Even though some modest easing in food inflation pressures is expected in the months ahead, Chart 5 highlights the lengthy lags at which market prices for wheat move down the pipeline. In particular, wheat prices at the raw materials stage have only begun to turn downward. Despite the decline in wheat input costs, producers continue to face labour and other costs that are still running hot. As such, while we would expect to see the year-over-year (y/y) increase in the food CPI in Canada to soon crest (the June reading was at 8.7% y/y), the extent of slowdown in the second half of this year is likely to be modest.

The UN-backed export deal is not without uncertainty, but we expect global wheat prices to continue receding as the additional Ukrainian supply and lower economic growth prospects weigh on commodity prices. Much of the risk to prices is on the downside, as softer demand predictions for 2022 offset the pressure from lower supply. We see prices remaining at their pre-war levels at $7-8 USD/bushel with the risk of recession adding further price declines. A great deal of the fear priced into higher wheat prices has subsided, and physical markets are moving towards balance territory.