There has been no shortage of developments affecting major Canadian housing markets over the past few years, notably new provincial taxes aimed at reducing speculative activity and – at least until recently – an upward move in borrowing rates. In its latest budget, the federal government stepped in to support first-time homebuyers with a set of new measures, which will have a modest impact (see commentary). But, by far the most meaningful development was the implementation of new stress testing requirements on uninsured mortgages issued by federally regulated institutions (i.e., B-20). This policy was implemented 16 months ago. However, it continues to be an important source of client questions across the country.

While there has been attention recently on the extent to which the new stress testing rules have dampened mortgage lending activity, this report looks more broadly at the consequences of the B-20 policy on trends in housing markets. A number of the B-20-related effects that we touch on below – such as on national demand and regional outcomes – have played out largely as we had anticipated ahead of implementation. Where we have been somewhat surprised is on the breadth of the impacts, including spill-over to activity in rental markets.

B-20 injected volatility into home sales 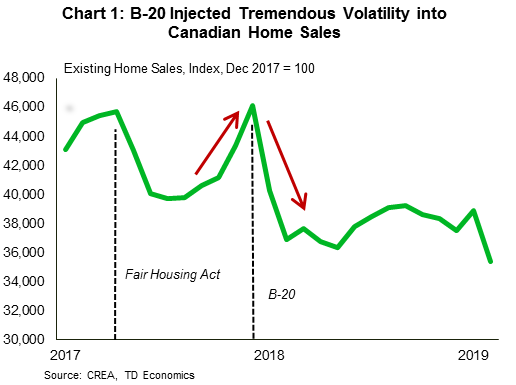 Our key expectation prior to the implementation of the B-20 lending guidelines was that it would significantly distort sales activity both before and after implementation. And indeed, this proved to be the case in spades (Chart 1). Ahead of its implementation date on January 1st 2018, sales surged in the final quarter of 2017 as buyers rushed to avoid the impacts of the new regulation. In our estimation, this pull-forward factor boosted nation-wide sales by about 8% in 2017Q4.

Following implementation, sales dropped dramatically – by around 20% – in the first three months of 2018, with broad-based declines across almost all provinces. What made this policy so impactful relative to other recent federal efforts to tighten rules around mortgage insurance was 1) the average purchasing power of households was reduced by around 20% compared to business as usual levels and 2) the uninsured mortgage market, which accounts for at least 70% of new mortgage originations, was targeted by the policy. In line with past mortgage tightening episodes, sales subsequently bounced higher in relatively short order. However, the magnitude of the recovery was comparatively muted, as activity was further dampened by rising interest rates and severely strained affordability conditions in larger urban markets. 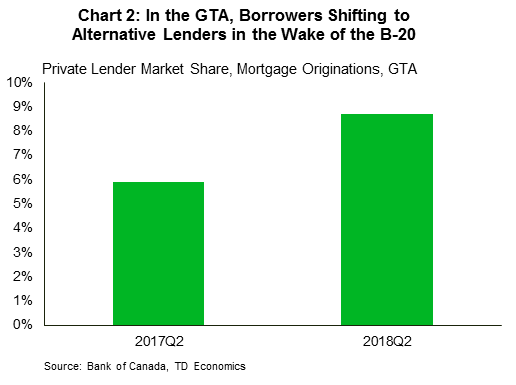 Aside from this initial volatility, the B-20 has fundamentally made it harder for buyers to qualify for an uninsured mortgage. As such, this policy has pushed a significant share of households to the sidelines in order to accumulate a higher down-payment. Our models suggest that across Canada, sales were about 40k lower than they would have been absent the policy between 2017Q4 and 2018Q4, factoring in the pull-forward effect.

Notably, our estimate of 40k potential purchases being sidelined translates into about a 7% reduction in sales during this time. While this may seem modest relative to the sizeable cut in purchasing power imposed by the policy, it’s important to remember that the shock wasn’t imposed on the entire mortgage market and buyers have had ways of lessening its impact on their budgets, like switching to alternative lenders or purchasing less expensive housing. On the former point, we find some evidence that borrowers have moved to private lenders, who are not subject to the B-20 lending guidelines (Chart 2). 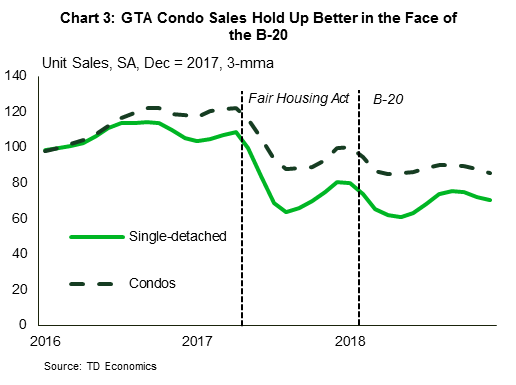 On the latter point, the implementation of the B-20 has likely caused some buyers to move down the value spectrum, but the exact impact remains difficult to tease out of the data.  This would be consistent with various surveys suggesting that potential buyers either have, or will make, some concessions on their preferred housing choice in order to qualify for homeownership. In Toronto, sales of relatively cheaper units dropped by less than their more expensive counterparts last year. Econometric analysis also suggests a disproportionately large negative impact on single-detached units compared to condos in the GTA market, perhaps signaling a move down the value spectrum (Chart 3). However, these impacts were less apparent in other major markets.

The B-20 guidelines cooled off property markets from coast-to-coast. However, the impact of new rules was uneven geographically. While national sales fell by 20%, weakness was pronounced in B.C., where sales plunged by 30% between December 2017 and March 2018. This decline was matched by that of Vancouver, its largest urban market. This disproportionately large hit occurred  despite the absence of a significant pull-forward in activity into the final quarter of 2017. In Ontario, sales fell by 20% during the same period. However, in the overvalued Toronto market, sales tumbled by an outsized 30% (Chart 4). It’s important to note that some of the observed weakness in these markets was undoubtedly related to other factors – most notably rising interest rates and provincial policy actions. However, in our judgement, the B-20 was the most impactful during this time.

The new rules appear to have impacted first-time homebuyers harder than other cohorts. Notably, existing home owners have not been subject to the guidelines if they elected to renew their mortgage with their current lender. More important for home sales is the fact that these buyers have had the advantage of some build up in home equity to use for a down payment. This is in stark contrast to first-time homebuyers, who largely count on savings to finance their home purchase. As a result, these would-be home buyers (that normally account for between 40-50% of the market) would have been facing relatively tougher standards for mortgage qualification. A more youthful-than-average demographic profile of Toronto and Vancouver – and, hence, larger share of potential first-time buyers – likely further exacerbated the impact of the B-20 rules on these markets.

The impact of the B-20 on first-time homebuyers becomes apparent when we hone in on activity in the GTA and GVA condo markets, as sales of these more affordable units serve as a good proxy for first-time homebuyer demand. Despite overall condo demand holding up better than other units in the wake of B-20, important differences have emerged within the condo segment. Notably, sales of less expensive condo units vastly underperformed in both markets last year, as first-time buyers had a tough time clearing the B-20 hurdle 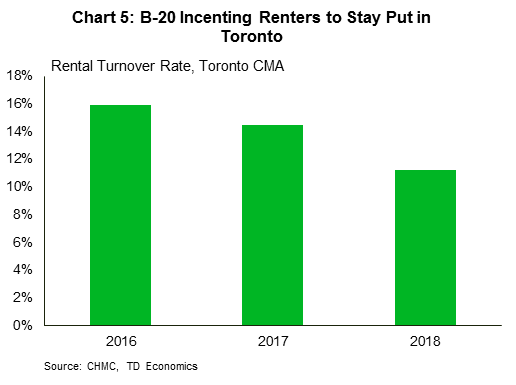 The impacts of the B-20 have not been confined to homeownership. By making homeownership more difficult, the new rules have pushed some would-be buyers to the rental market or forced those that are currently renting to stay put (Chart 5). We estimate that the imposition of the B-20 caused vacancy rates for purpose-built rental units to fall by around 20-30 bps in Vancouver and Toronto. In the latter market, the policy is exacerbating the more pronounced impact from rent controls imposed  two years ago.

For both markets, this presents a significant challenge, as their rental markets are already severely under supplied with current vacancy rates at just 1%, less than half the national metric. Making matters worse, immigration into these two landing pad cities is likely to increase in this year and next, putting additional strain on their rental markets. 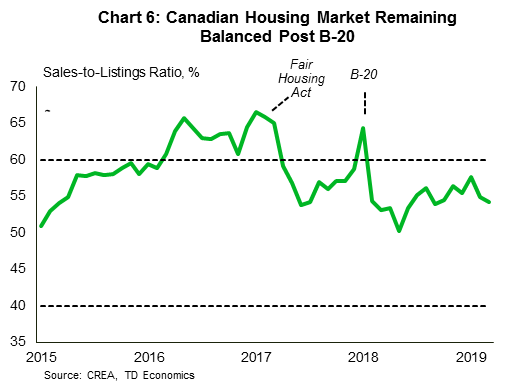 The imposition of the updated B-20 lending guidelines has also left its mark on the supply side of the equation. In the resale market, sellers have taken their cue from buyers. Just as buyers rushed their purchases into the final quarter of 2017 ahead of the B-20’s start date, sellers did so as well, though to a lesser extent, with listings rising by 5% in the final quarter of 2017. Following the start of the new rules, new listings plunged in tandem with sales in 2018Q1, and have yet to really recover. However, the extent of the decline in listings has been smaller than sales, keeping the overall national market in balanced territory (Chart 6). 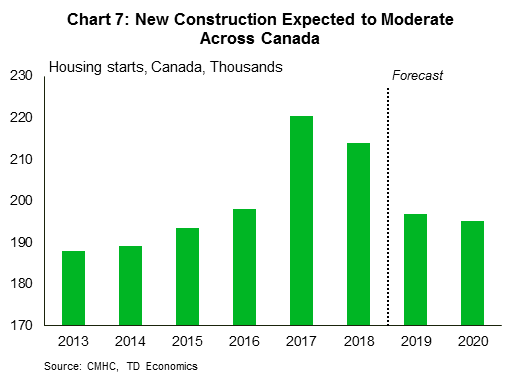 While we have talked at some length about trends in the resale market, the market for new housing has also been affected. For instance, industry data indicate that sales of pre-construction units in Toronto and Vancouver markets were significantly lower in 2018. These trends will show up in new housing construction, albeit with a lag. As such, our current forecasts calls for housing starts to trend lower through 2020 (Chart 7). This implies that new housing construction will likely be a drag on growth next year. Thankfully, healthy job gains and robust population growth will provide a floor. 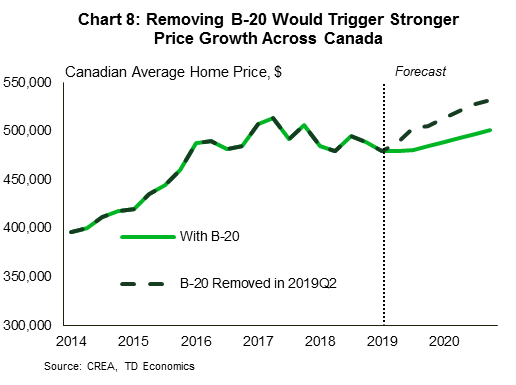 Some stakeholders in the real estate industry have decried the B-20 legislation, arguing that the policy has gone too far in restricting access to the ownership market. In contrast, the federal government and OSFI continue to support the policy, indicating that it has helped to restore balance in the marketplace, contributed to reduced risks around household leverage and helped to cushion prospective buyers to income or interest rate surprises.

Our current projections call for Canadian home prices to stabilize by mid-year and to be about 4% higher than current levels by the end of next year. However, imagine a scenario where the B-20 was immediately removed. All else equal, nation-wide home sales and prices could be around 8% and 6% higher, respectively, by the end of 2020, compared to current projections. This would amount to about a 32k difference in the average Canadian home price relative to our forecast, with disproportional impacts on the GVA and GTA markets.

The removal of the B-20 regulation would represent a significant near-term boost to housing activity, though at a longer-term cost of worsened affordability. At the same time, the homeownership hurdle would be more easily cleared by renters, likely incenting some to vacate their rental units. Rental supply could thus receive a lift in the short-term; however, with affordability for ownership housing likely to deteriorate with the removal of the policy, this effect would prove fleeting.

For the most part, the B-20 rules have contributed to bringing down housing activity to a more sustainable level and larger impacts seen in CMAs where affordability was strained the most. From the standpoint of regulators and the central bank, the B-20 guidelines have been working to improve mortgage quality, slowing credit growth and stabilizing household leverage.

Other consequences were either more surprising and/or unintended, including sales weakness lingering longer than expected, increased tightness in rental markets and the migration of some borrowers to riskier alternative lenders.  These developments need to be monitored. The impact on the first-time homebuyers was also notable, prompting the federal government to follow up with some relief measures in the latest budget.

This speaks to the importance of maintaining flexibility going forward with respect to tweaking the B-20 rules, especially if circumstances change or if housing markets continue to undershoot expectations.