Back in Black (Ink) 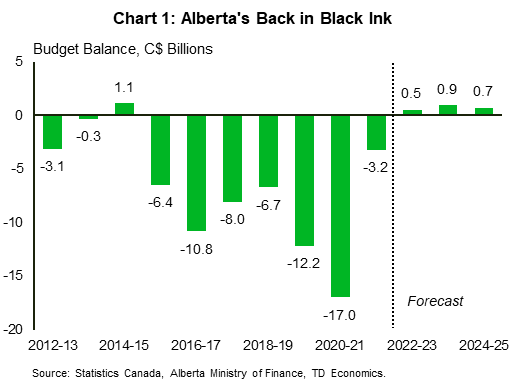 Elevated oil prices allowed Alberta’s government to bank revenues that were much higher than originally expected in FY 2021/22. As such, the deficit estimate for that fiscal year has been carved again, and the Province is set up to run a surplus (its first in nearly a decade) in FY 2022/23. This move into the black is expected despite revenue growth slowing markedly after a blowout year in FY 2021/22. Given that the budget for the year ahead is based on a cautious outlook for crude oil prices, there may be some upside to the revenue picture in the coming months.

The key spending item in this budget is healthcare, which claims nearly $2 billion in new funding over the next 3 fiscal years. However, overall program spending is restrained to very modest pace over the projection period, with an eye to maintaining the province’s improved fiscal position. On the debt front, Alberta’s net debt-to-GDP ratio is set to drop to levels last seen before the pandemic struck. Notably, there are no new major tax initiatives in this budget.

Alberta’s FY 2021/22 deficit is estimated at $3.2 billion (or 0.9% of GDP), down from $5.8 billion in the fall update. Higher revenues drove the thinner shortfall, with everything from income taxes, resource revenue, investment income and federal transfers coming in higher-than-anticipated.

Deficits to Shift to Surpluses in Short Order 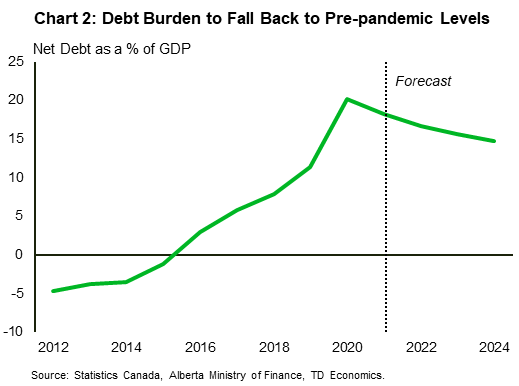 The province is projecting a modest $500 million surplus in FY 2022/23, which then edges up to $700 million by FY 2024/25. If realized, this would mark the first time a 3-year run of surpluses has taken place since the oil bull market in the mid-to-late 2000’s. Also notable is the government’s intention to consider funneling surpluses towards the Heritage Fund and/or debt repayment.

Revenues are slated to grow at a mere 1% pace, on average, over the next three fiscal years. However, this is a stronger profile than was impeded in the fall fiscal update and follows a 40% boom that took place in FY 2021/22. The latter would have put the province into a surplus position if various contingencies for COVID and disasters hadn’t been set aside and ultimately used. Revenues are expected to be constrained in the upcoming fiscal year by a steep drop in investment income on the heels of the big gain seen in FY 2021/22. Over the 3-year planning horizon, falling resource-sector royalties supply the most weight as commodity prices cool.

Still, there is plenty of room for an upside surprise to the government’s FY 2022/23 revenue forecast, especially with WTI oil prices currently hovering around US$90/barrel. For the calendar year, the government expects the WTI price to average $73, below our own estimate of $77, which will likely be revised up shortly given tight global markets and geopolitical uncertainties. To get an idea of sensitivities, the government estimates that revenues rise by $500 million for every US$1 increase in the WTI price and by $455 million for every 1 cent depreciation in the Canadian dollar. On the latter front, the government is forecasting the Canadian dollar to average 79 cents this year, whereas we are expecting it to average around 80 cents.

The government’s mild revenue forecast also comes despite expectations of robust nominal GDP growth. Indeed, policymakers are expecting nominal GDP to grow at a firm 12% pace, on average, from 2021-2023 – slightly above our December projection. Real GDP growth is expected to average 4.9%, roughly in line with our December view. However, the prospect of higher oil prices could see both real and nominal GDP growth run stronger. Indeed, the government is forecasting only modest growth in oil production this year, which could prove too pessimistic given that prices currently sit well above breakeven rates.

Spending is projected to decline in FY 2022/23, weighed down by fewer expenditures on contingencies for COVID-19 and disaster assistance. Over the next 3 fiscal years, spending is projected to drop by about 1%, on average. Still, this marks an upgrade relative to the fall update, suggesting that policymakers have eased off on spending cuts to a modest degree given the revenue profile has been upgraded.

However, growth in operating expenses is also subdued, averaging just under 2% over the planning horizon. Spending on healthcare, post-secondary education and social services ministries see the strongest growth in FY 2022/23. However, over the 3-year planning horizon, healthcare spending is projected to increase at the fastest (though still-subdued) pace of around 2.5% annually. This funding will go towards strengthening healthcare capacity, enhancing mental health resources, recruiting nurses and physicians and easing pressure on the acute care system.

In other priority areas, some $600 million over 3 years will be put towards labour market initiatives and skills training, including expanding enrolments in high-demand programs, and increasing apprenticeship.

Debt to GDP to Fall Back to Pre-Pandemic Levels

Capital spending is slated to total $7.5 billion in the upcoming fiscal year, with healthcare capacity and transportation infrastructure receiving a boost. After FY 2022/23,  capital spending gradually declines. Shrinking capital spending combined with ongoing surpluses are projected to send both the absolute level of net debt and its ratio to GDP lower. The latter is projected to drop from 18.3% in FY 2021/22 to 14.8% by FY 2024/25. If achieved, the latter would mark the lowest such figure since FY 2019/20.

Borrowing requirements total a mere $3.5 billion in FY 2022/2023 – steep drop from the $8.6 billion figure seen in the prior year. Requirements are projected to average $6.7 billion thereafter. Most of this borrowing is set to be completed with long-term debt issuances.

It’s been a long, challenging road back to surplus for Alberta, and the modest spending path laid out in Budget 2022
indicates that fiscal prudence remains a key goal. There’s also a good chance that Alberta’s fiscal position will benefit
from an upside revenue surprise in the upcoming fiscal year. Also noteworthy is the government’s FY 2022/23
capital spending plan, which matches the prior year’s sizeable outlay and should help support growth in 2022.