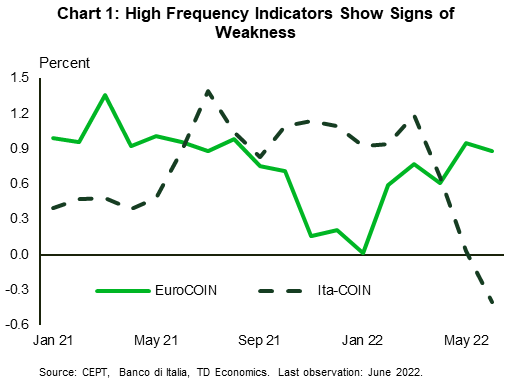 The European Central Bank (ECB) is facing a daunting outlook. The energy shock due to Russia's war in Ukraine that is fueling much of the region's inflation is also increasingly likely to profoundly restrict growth. As near-term indicators are signaling that a recession may soon begin, the ECB has committed to a "meeting-to-meeting" basis for rate decisions that may force them to raise rates into a recession.

Near-term tracking measures have started to show a steep deceleration, or outright contractions, in economic activity in the euro area. July's flash PMI readings for the euro area reflected a decline in output, with much of the pain being felt in its industrial engine – Germany. The EuroCOIN and Ita-COIN indicators are also showing growth having topped out and starting to fall (Chart 1), respectively, while Germany's weekly economic index is showing an outright contraction. Indeed, German GDP data reported last week indicate the economy shrank at a 0.2% annualized rate in the second quarter. 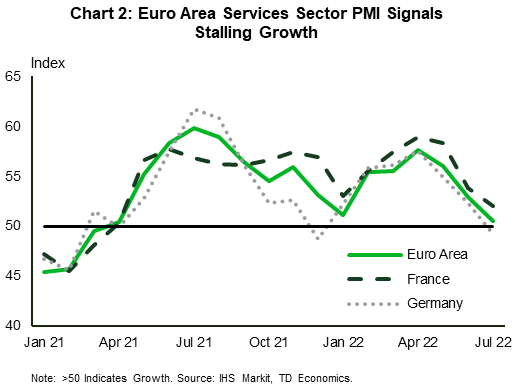 The slowdown in economic activity, given the circumstances, is not all that surprising. What is concerning is the steep deceleration in the services sector (Chart 2). A strong bounce-back in activity earlier in the spring, built on a return to tourism and recreational activities after COVID lockdowns, has petered out. What had been expected to be a key area of support for the economy has wilted under a growing inflationary shock – primarily from the energy sector.

Unfortunately, the energy price shock shows few signs of abating. Worries about an impending recession have helped crude oil prices off their highs, but supply concerns have helped form a high floor under prices. Moreover, natural gas flows from Russia through the Nord Stream 1 pipeline have been reduced to 20% of full capacity, and the prospect of a full stoppage has spurned policymakers to draw up a consumption reduction strategy. IMF research1 suggest a shortage could see gas prices rise between 110% and 370% over the course of a year. The effects on inflation are smaller as pass through to end consumers will depend on the degree to which energy firms are allowed to pass on wholesale price changes, and the extent to which its effects are offset by the deflationary impact of demand destruction.

Fortunately, there has been some respite on the inflation front as commodity prices have eased from their highs earlier in the year on concerns about a global economic slowdown. So, while input price inflation remains high, it isn't rising at as rapidly as in prior months (Chart 3).

Looking forward, it is the ongoing lift to energy prices that is most concerning. Thus far the energy shock is responsible for over half (Chart 4) of the inflationary impulse in the common currency area. But prices are coming under pressure again as Russian gas flows have been curtailed. 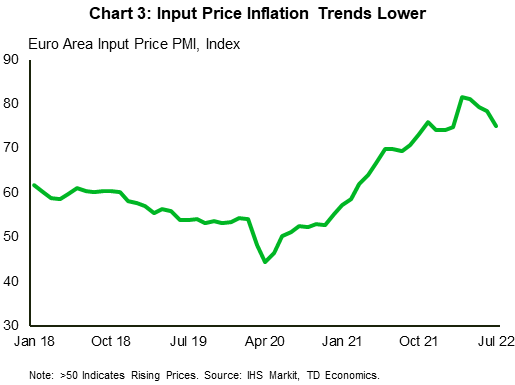 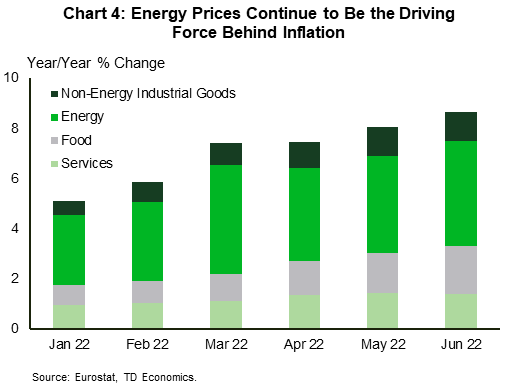 The threat of a full stoppage of gas flows looms, and the demand destruction that would follow would be substantial. A host of literature on potential losses has emerged in the past months. Recent work from the IMF suggests that E.U. wide output losses could range between -2.7% (if households are protected despite countries facing shortages) to a milder -0.4%2 if the EU were able to fully integrate into the global LNG market3. Two important caveats here. First, these losses are relative to a benchmark with no shortages. Since we have already seen supplies dwindle this summer, the effects relative to recent baseline estimates would be smaller. Secondly, these estimates don't incorporate the erosion in consumer and business confidence that would be sure to follow.

In response to the risk of a full stoppage the European Commission has asked for a voluntary 15% reduction in natural gas usage across the European Union (with some exceptions). These voluntary cutbacks could go a long way to limit the economic fallout from a gas shortage. IMF estimates for Germany4 suggest that by strategically rationing gas and complementing this with an effective reduction in household demand, the direct GDP loss in the first six months of the shock could be reduced from 0.9% to 0.2%. 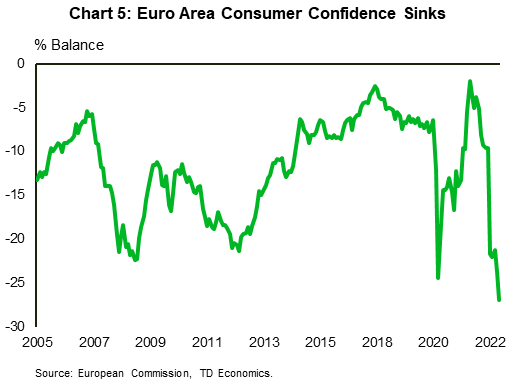 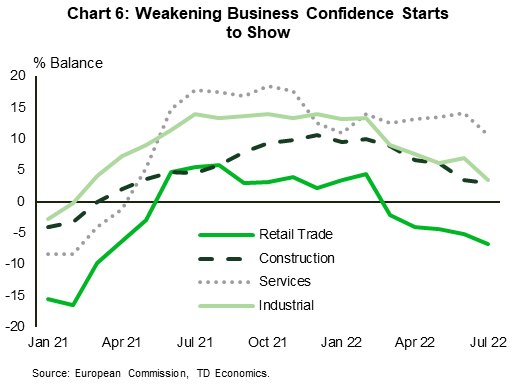 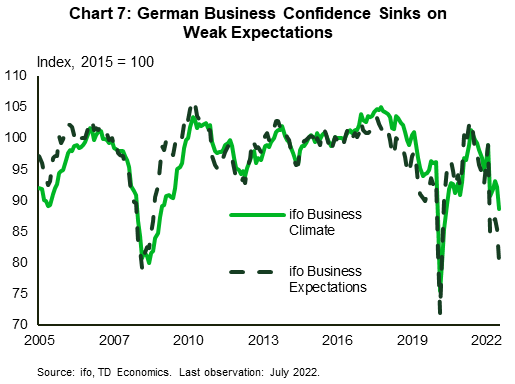 Given the rapidly declining economic outlook, the ECB supported its decision to raise interest rates by 50 basis points (rather than the 25 they had signaled in the lead-up to the meeting) by emphasizing the need to temper inflation expectations and the announcement of a new bond-buying scheme to stabilize monetary policy transmission (the Transmission Protection Instrument or TPI)5.

Exacerbating the inflation pressure has been the steep depreciation of the euro. As policy rate paths between the U.S. and the common currency area have diverged, the euro, now trading at parity with the U.S. dollar, has sunk roughly 17% since its high in early 2021. The broader trade weighted measure is down a more modest 7.4% over a similar time span. Policy rate normalization could help limit further depreciation and be an offset to inflation.

With regards to inflation expectations, there is reason to act. The German five-year breakeven inflation averaged 2.8% last week. Despite being off its peak, it is still higher than at most points over the past 10 years (Chart 8). Consumer price expectations also remain high, albeit easing off record levels in June.

However, it is the wage-price spiral the ECB is looking to counteract. Real wages have steeply contracted across the common currency area as inflation has taken a large bite out of consumer buying power. In Germany, negotiated real wages are down 5.9% year-over-year (or 3.5% when including one-time bonuses) as inflation has outstripped earnings gains from collective bargaining agreements (Chart 9). However, that dynamic is shifting as unions that had previously limited wage demands believing the inflation shock to be temporary are increasingly asking for larger raises. The timely example is Lufthansa's ground staff positioning to strike on a 9.5% wage claim6. Ongoing labour market tightness should support labour's bargaining power with firms until employment intentions fade. 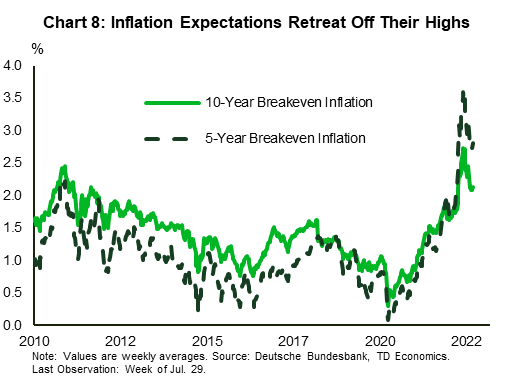 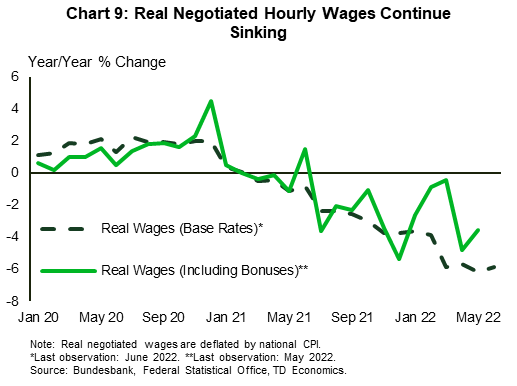 Lastly, political uncertainty within the currency union is ramping up again. Italy is currently mired in political turmoil with PM Mario Draghi stepping down, and potentially fresh elections looming. Of concern for the Italian outlook is the ongoing implementation of an economic reform agenda that is required to progress in order for billions of euros in stimulus money from the Recovery and Resiliency Fund to be disbursed. The Italian funding is not the only portion in jeopardy, as the European Commission is currently embroiled in a dispute with Hungary that could also see its funding pulled.

The downside risks that were on the radar for 2022 are quickly materializing. Europe is staring down an energy price shock that may quickly turn into an outright shortage. The effects across the European Union will vary, with countries most exposed to Russian gas flows and limited infrastructure linkages to LNG supplies facing the most challenging conditions.

For the ECB, the worst-case scenario is quickly developing. Higher energy prices fueling an inflationary feedback loop, while also decreasing output means the Governing Council could soon be faced with the prospect of raising rates to preserve longer-term stability despite an output contraction.