The Good, The Bad, And the Ugly 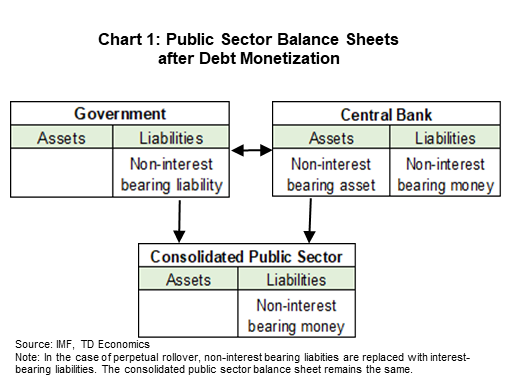 Countries’ unprecedented fiscal and monetary efforts to tackle the crisis have created an uncomfortable dynamic. Government policymakers have rolled out large open-ended measures that will require massive borrowing (see report). At the same time, central banks – including the Federal Reserve (Fed), European Central Bank (ECB), Bank of England (BoE), Bank of Japan (BoJ) and Bank of Canada (BoC) – have announced large and in some cases “unlimited” government bond purchase programs, effectively becoming an enabler of the dramatic increase in borrowing.

Some central banks have gone further, not just purchasing bonds via secondary markets, but by providing funding more directly to governments. The BoE recently announced that it has temporarily extended an unlimited overdraft to the government, allowing it to potentially bypass the sovereign bond market.1  The Reserve Bank of New Zealand (RBNZ) has also indicated its openness to directly buy government debt, while the Bank of Indonesia is already purchasing government bonds through the primary market.

The end goal of these actions has been clearly communicated by central bankers: to assist with the orderly functioning of markets and to provide temporary support to economies during the pandemic induced crisis. Still, it has stoked fears in some corners that central banks are embarking on debt monetization that will ultimately lead to inflation, or worse, hyperinflation. And while policymakers have quickly distanced themselves from monetization, such fears are not entirely misplaced.

In this report, we provide some clarity on the often-fuzzy concept of debt monetization, its risks and preconditions that could yield higher inflation in the future. Although traditionally not considered part of most central banks playbooks, unprecedently large debt-loads being faced by governments around the world will make monetization an increasingly viable option. Notwithstanding monetization’s risks, it could potentially have merits under certain circumstances and when done right.

What is debt monetization?

Monetization is the permanent increase in the monetary base with the aim of funding the government. In other words, monetization occurs when central banks buy interest bearing debt with non-interest-bearing money. The requirement that it be a permanent exchange of debt for cash is critical. Monetization is not a simple open market operation by a central bank that it frequently conducts to achieve its policy targets.

Still, even if there is a permanent conversion of debt into cash, it is not necessarily the case that monetization will yield sharply higher inflation. Other preconditions need to be met:

The risks of monetization have been seen first-hand through history. We can go as far back as the interwar period, where debt monetization led to hyperinflation in Weimar Republic, the legacy of which affects Germany’s outlook to monetary policy to this day. More recently, episodes of rapid inflation have been seen in emerging markets (EMs). Latin America (Brazil, Mexico, Peru) in the late 80s and early 90s is another example where monetization contributed to runaway inflation. More recently, certain African central banks (Zimbabwe, Sudan) have also monetized fiscal deficits leading to a vicious cycle of inflation, currency depreciation and deficit expansion.

But haven’t economies already been monetizing debt through quantitative easing?

There has been much discussion around whether the quantitative easing (QE) programs that have been in effect for much of the past decade – and in some cases relaunched during the pandemic – should qualify as debt monetization. While central banks doing QE have maintained some separation from directly funding government deficits through purchasing assets in secondary markets (until recent weeks), this distinction is superficial at best, since largescale central bank buying has helped to enable governments to borrow at ultra-low rates.

While QE programs over the past decade have led to an increase in the monetary base, they have done little to increase money supply. This was partially due to central banks paying interest on reserves at the central bank and a reluctance of banks to lend in the period right after the global financial crisis (GFC).

Importantly, where QE programs thus far have fallen short in meeting monetization criteria has been their temporary nature. For example, the Fed was careful to justify QE as a key non-conventional tool to help achieve its inflation objectives. When these targets were achieved, QE was reversed in 2017.2  As such, credibility has remained intact and inflation expectations low.

The politics of monetization

Although there appears to be little current appetite among central banks for abandoning current policy setting objectives in favour of debt monetization, this could change down the road as pressures mount and the appeal of monetization grows.

Notably, by the time the dust settles from this crisis, several countries will be facing much larger debt burdens and fiscal deficits (Chart 2 and 3). And depending on countries’ growth prospects and future debt servicing costs, high debt levels may be unsustainable. Governments will have a few options to reduce debt. They can count on inflation, debt restructuring, financial repression, higher taxes, and wealth expropriation. From a political perspective, however, the most feasible option is to allow monetization induced inflation to eat away at debt. The remaining options can have severe political repercussions 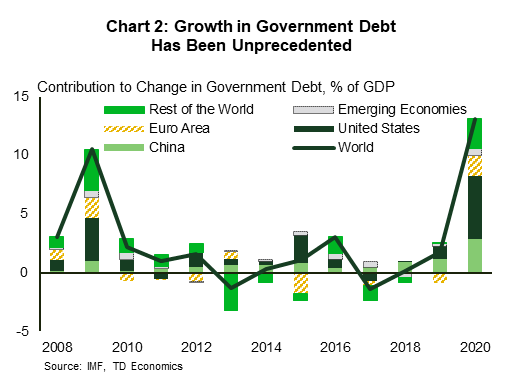 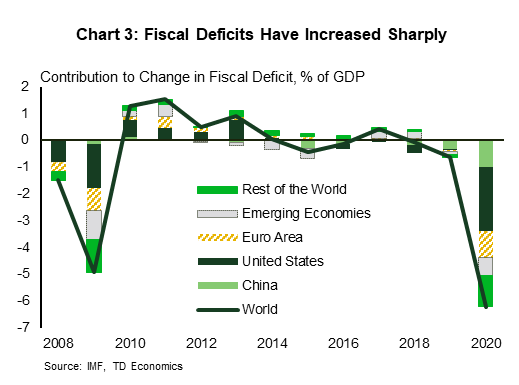 Until now, proponents of monetization were accused of heresy. And there were reasons for that. Accepting monetization and removing legal obstacles will give money-creating power to the government. Elected governments have short-term goals that are aligned with the election cycle, so they can ask for new money (and more spending) at opportune times, thereby allowing inflation to get out of control. While unelected governments are not influenced by election cycles, coercing central banks to print more money is one way they maintain power.

Debt monetization may also be “good politics”. The government would welcome lower bond yields caused by the purchase of government debt by the central bank. From the government’s perspective, printing money also looks good, as it depreciates the currency, increases asset prices and boosts the economy. A depreciated currency would also improve the current account balance, which could also be used for political point-scoring. With monetization, the government can also cut taxes or increase expenditure without having to worry about future interest liabilities. Such convenient fiscal policy, especially during peak election cycles, will inevitably benefit the incumbent government.


However, on the flip side, monetization may also exacerbate wealth inequality as it would lead to an increase in asset prices. Therefore, households already holding assets (for example, equities, real estate) would see their wealth increase. Those not holding assets would see a decrease in their incomes relative to asset-holding households. This will propel the already high wealth inequality, promote populism and generate political instability.

The case for monetization 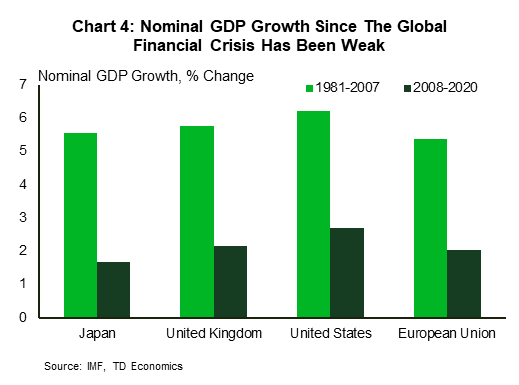 Notwithstanding monetization’s risks, it has its merits under certain circumstances and when done right. Monetization may particularly be useful when aggregate nominal demand needs to be stimulated during a recession or deflationary cycles. Given the weak nominal GDP growth since the GFC, it may also be useful to fuel growth for certain countries outside of a crisis (Chart 4). The need to stimulate nominal demand may especially be true once this crisis is over as pandemic induced scarring to the economy is likely to shift near-term nominal GDP growth downwards.

Monetization – like debt-financed fiscal deficit – can lead to an increase in aggregate nominal demand. But under monetization, the increase in government spending today, does not have to be offset by higher taxes tomorrow, as the increase in the monetary base is permanent. Compared to negative interest rates, monetization can also stimulate aggregate nominal demand without the risk of financial instability caused by large private sector credit gaps or overleverage.

Monetization may be more effective than other measures to stimulate nominal demand. In Table 1, we compare monetization to a range of other monetary and fiscal stimulus measures, such as helicopter money, temporary QE, debt financed fiscal deficits, and a combination of the two.3

For monetization to be safe, and for it to work within existing frameworks, a lot would depend on the relationship between monetary and fiscal authorities. Central banks should be independent and beyond the government’s influence.

Therefore, there needs to be clear legislation on central banks’ mandates as we enter a new phase of policymaking. If central banks appear complicit with the government – either on their own or through coercion – it will damage their credibility. Once credibility is damaged, it will further reduce the effectiveness of monetary policy, especially for tools such as forward guidance.

While there are instances when monetization can be feasible, the risks need to be weighed carefully before embarking down this road. If not in the right hands, a shift in central bank objectives from inflation targeting to funding the government can lead to unanchored inflation expectations. This can drive up bond yields and cause immense damage to the economy. Therefore, as a prerequisite for monetization, it is important to establish clear guidelines within a strong legal and operational framework. To reduce the potential damage to the central bank’s credibility, it is also important to clearly communicate monetization’s scope, timeline and exit strategy.

We live in a new world where the word “monetization” is no longer considered taboo. While feasible in some cases, monetization could be a risky endeavor periled with hyperinflation and increased government influence over central bank decision making. This is especially true for EMs, where institutions are on average weaker than AEs. Central banks continue to signal a desire to maintain the status quo of independence and their existing inflation-targeting frameworks. However, the current framework could come under growing pressure as government debt loads and central bank holdings expand and the line between fiscal and monetary policies become increasingly blurred.

In terms of the impact of adopting a debt monetization strategy, much would depend on how effectively the system was managed. For example, it would not preclude the continued establishment of a strong institutional framework that would guarantee central bank independence. Still, officials would need to tread carefully, since history shows that if it falls in the wrong hands, it could cause inflation expectations to become unanchored, drive up bond yields significantly and cause immense destruction to the economy.