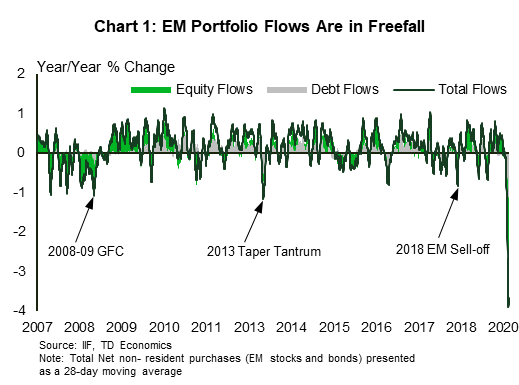 The COVID-19 pandemic has not spared any region of the world, but attention has largely been focused on advanced economies (AEs). The disease is fast spreading in emerging markets (EMs), prompting authorities to initiate travel restrictions and lockdowns, with severe economic consequences. However, EMs are more vulnerable to such crises than AEs. Weak healthcare systems and high population densities constrain EMs’ ability to stymie the virus spread. If dealing with COVID-19 disruptions was not enough, EMs also face an unprecedented stop in capital flows.

Rapid capital outflows are familiar territory to EMs, as are a drying up of inflows. For many EM policymakers, the dark memories of the 1997 Asian crisis are still fresh. While most EMs today have larger buffers than during the Asian crisis, the current crisis is broader and more all encompassing. The COVID-19 related drop in net capital inflows are not only bigger than the those seen during the global financial crisis (GFC), but also the 2013 taper tantrum and 2018 EM sell-off (Chart 1). 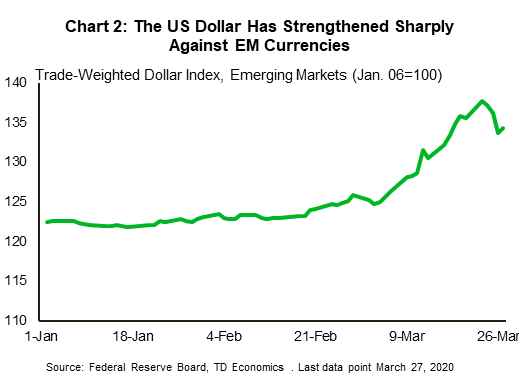 The end result is significant downward pressure on EM currencies (vis-à-vis the U.S. dollar), tighter financial conditions, subdued asset prices, and depleted foreign reserves. Since the beginning of this year, the U.S. dollar has strengthened by 11% against EM currencies (Chart 2). In better times, weaker EM currencies would have had helped their exports, but not this time, as the worldwide spread of COVID-19 means unprecedented weak global demand. All this makes government financing more difficult, especially for those with large deficits or where reserves are not enough to meet financing needs. This crunch also hurts the highly-leveraged EM non-financial corporate sector, which saw its borrowing go up from 65% of GDP at the advent of the GFC to 94% in 2019.

EMs face a difficult policy dilemma in mitigating the economic damage caused by these types of crises. Easier monetary policy threatens to exacerbate capital outflows, worsen dollar shortages, and counteract the positive impact on the real economy. While monetary easing by major AE central banks mitigates some of this risk, more may be needed, including bold moves by EM central banks, an extension of the Federal Reserve’s U.S. dollar swap line and a proactive IMF (International Monetary Fund). 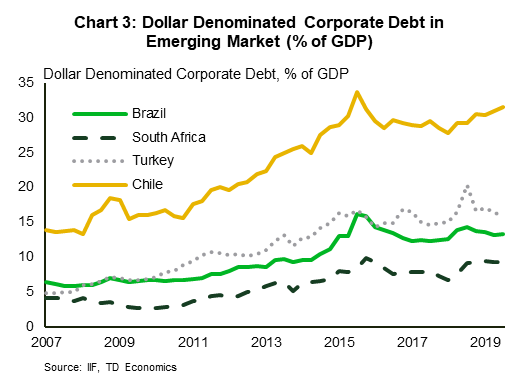 The strengthening of the U.S. dollar due to COVID-19 related flight-to-safety has made it more expensive for EM entities to borrow in the currency. This is problematic because dollars are needed for trade, debt repayment, regulatory requirements, and reserves. EMs are also more vulnerable to having weaker currencies as they have become more exposed to the dollar since the GFC, especially through the credit channel (Chart 3).

In non-crisis times, non-U.S. banks finance their dollar assets (for example: loans, bonds, derivative positions) in U.S. dollar repo markets or FX swap markets. But during crises, the willingness to provide dollar funding shrinks in private markets, raising funding costs. EMs are most vulnerable to such declines in cross-border dollar lending because they have limited access to other sources of funding and cannot typically replace dollars with other currencies.

For EMs such as Mexico, South Africa, and India, starting conditions were already weak. Mexico has seen negative quarterly growth in five of the last eight quarters and is forecasted to contract by 3.2% this year. South Africa ended 2019 with a technical recession and a persistent current account deficit (3% of GDP in 2019), which may prompt it to look towards the IMF for help. India is almost assured its slowest growth in eleven years as its economy continues to disappoint, decelerating into the start of 2020. COVID-related return-to-home measures recently put in place could result in some unprecedented economic declines yet. Even those EMs, such as Turkey, who had momentum coming into 2020 have heavily relied on credit to fuel growth, which keeps their economy fragile. These idiosyncratic weaknesses make EMs more susceptible to COVID-19 related disruptions.

Oil prices were declining due to weakening demand caused by COVID-19, further exacerbated by the Russian-Saudi price war. From about $50 a barrel at the end of February, the WTI benchmark price has plummeted, hitting as low as $14 by end-March. Countries most severely hit include several oil-exporting EMs in Latin America, the Middle East and Northern Africa. Many oil exporting EMs have their currencies pegged to the U.S. dollar and would have to deplete their already fragile reserves to defend their fixed currencies. Oil importing EMs would usually benefit from such a price decline, but their ability to benefit from this price drop depends on how severely COVID-19 affects their domestic demand.

EM Policymakers Are Faced With A Catch-22 Situation

EM monetary policymakers are yet again faced with a dilemma. If they cut interest rates to ease financial conditions, they risk further capital outflows, thereby strengthening the sudden stop. If they tighten to stem the capital outflow, they risk further tightening financial conditions against an already-weak domestic demand backdrop. Traditionally, during crises periods EMs have been reluctant to cut. This has been due to the belief that monetary policy easing would lead to un-anchored currency weakness. However, this time we are seeing some EM central banks (Turkey, Chile, Thailand) cut rates, while others (Colombia, Philippines, South Africa) have started quantitative easing. Though unlikely for now, room to ease further may be limited if their fears come true.

There Is Fiscal Space Available, But Not For Major EMs

On the fiscal side, there is policy space in EMs to respond to the situation. However, given institutional limitations and capacity constraints, coming up with a timely fiscal response may be challenging for most EMs. Europe (Russia, Czech Republic) and Asia (Indonesia, Saudi Arabia) have room for fiscal easing, but the debt burden in a few major countries is a constraint on others.

India is a prime example. India’s fiscal deficit so far this year is 3.3% of GDP which is 129% of its revised budget target. India has now missed its fiscal deficit target three years in a row and is expected to do the same this year. At the same time, India’s total debt-to-GDP ratio stands at 68%. Other large EMs, such as Brazil and South Africa also have large debt burdens standing at 88% and 61% of GDP, respectively. The current situation has also increased EM governments’ borrowing costs, as reflected in the 3.4 percentage point increase in South Africa’s 10-year sovereign bond yield since the start of this year. However, regardless of fiscal space, we do not suggest EMs hold back on fiscal spending in the current environment, as the unprecedented risks from COVID-19 are severe and immediate.

EMs are in a difficult position, but the right policy mix can soften the blow. Some of the policy options include:

EMs are in a difficult position. They are faced with a sudden stop worse than the GFC, which has led to significant downward pressure on their currencies, tighter financial conditions, and severe dollar shortages. Limited policy space and weak healthcare systems have compounded their issues. Given the growing importance of EM economies and the interconnected nature of today’s global economy, shocks of this nature are a recipe for a major balance of payments crisis, that can boomerang to AEs. Deliberate yet bold policy moves by EMs, cooperation of AEs, and multilateral support by the IMF is needed to mitigate symptoms.