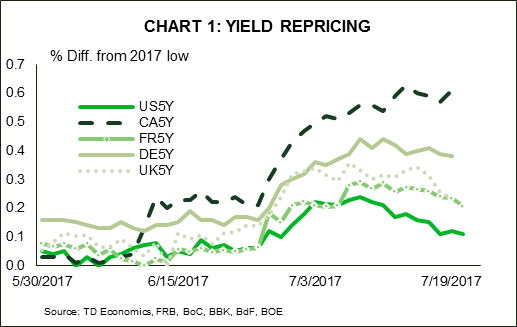 Major central banks have followed the Federal Reserve’s lead by shifting to a more hawkish stance towards interest rates. The Bank of Canada is a prime example, which undertook a rapid change in tone over a six week period that concluded with a 25 bps interest rate hike on July 12th. To financial markets, this was an abrupt U-turn from the Bank’s previously cautious communications focused around weak inflation and trade threats. Across the pond, the ECB has also taken a few steps back from prior dovish sentiment to do “whatever it takes” to support economic activity, towards the possibility that its QE program will cease to continue in its current form by the start of next year. Even the Bank of England is mulling over raising rates just 12 months into the Brexit process. This monetary policy pivot has brought forward rate expectations among market participants, reducing the expected monetary policy gap with the Fed. Consequently, most major sovereign yields have jumped significantly from 2017 lows (Chart 1).

What has fundamentally changed to warrant the seemingly synchronized shift in central bank tone? As we have previously commented, a synchronized mini-cycle over the last year has boosted macroeconomic growth. Global economic prospects no longer reflect a one-horse race, represented by a determined American economy. An eventual return to a trend pace will see the removal of significant economic slack that has pushed unemployment rates to cycle lows. Given the magnitude of this run, typical models used by central banks would tell you that, within the next 12 months, inflation will move back towards its target in a sustainable manner. Through their cautiously hawkish communication, central banks have confirmed their faith in the impulse response calibrated over history. That said, this economic cycle has repeatedly defied “historical” experiences, and it is prudent to challenge models and adapt forecasts based on the current economic reality.

The impulse of inflation dynamics 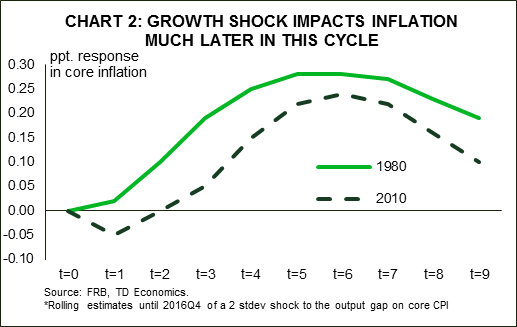 At TD Economics, we have tested these models over this economic cycle, which has revealed that the theoretical relationships have maintained themselves, but under the characterization of much longer lags (Chart 2). As our research demonstrates, an improvement in economic slack is slower to make an appearance within actual inflation data, and even once it does, the magnitude is more muted. We have seen this in the U.S. which, by all accounts, should be producing much firmer readings on inflation. With the unemployment rate pushing through estimates of the natural rate, average hourly earnings have been above 2% for each of the last four calendar years. Yet, during each of these years, the Fed’s preferred measure of inflation, core PCE, undershot the target inflation rate. In comparing across countries, wage growth in Canada, the UK, and Europe have yet to improve to levels like what we have seen in America. This implies that even though these economies have outperformed of late, it will take time before there are stronger signs of inflation progressing sustainably towards target. Once this happens, the case for inflation will become clearer. Until then, America offers a good case study for the inflation dynamics of this cycle.

Since the financial crisis, there isn’t an advanced economy that has been able to consistently keep inflation near target for a sustained period of time. Even central banks admit that the evolution of post-crisis inflation dynamics are not entirely understood given the intensification of structural forces like aging demographics. The ageing of the developed world lowers economic growth, forcing an adjustment of prices to balance aggregate demand in a new economic equilibria. At the same time, we have seen an impact on the supply side, specifically, in the supply of goods and raw materials. The emergence of the Chinese production hub 16 years ago has caused a glut of goods to fill up the supply chain. Furthermore, low raw material and oil prices have persisted due to high inventory levels stemming from extraction efficiencies and legacy investment during the peak of the commodity price cycle of previous years. Adding to these disinflationary pressures is the game changing impact of online retailing. Reduced barriers to entry have brought in new players, increasing competition, and limiting corporations’ ability to pass on higher prices to consumers who can adjust purchase preferences with the click of a finger. The combination of these structural revolutions implies that even if local factors of wages and slack point to higher inflation, global factors are likely delaying an acceleration of prices, or at the very least, the magnitude of those price adjustments.

In addition, recent months have brought forward a more cyclical influence on consumer prices via the pass-through of currency appreciation. Given the importance that yield differentials have on currency crosses, we have seen the basket of major trade weighted currencies appreciate nearly 8% versus the greenback year-to-date. Currency appreciation will make foreign goods cheaper, resulting in lower import prices. The combination of structural factors and import price headwinds imply that central banks can take their time with the removal of monetary accommodation.

From lift-off to probing 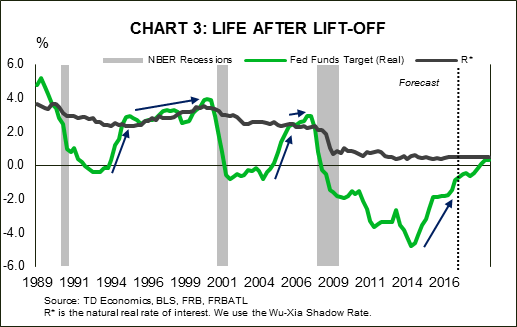 Part of the central bank journey is one of experimentation, ultimately probing for the right level of interest rates that will not compromise economic growth that is already challenged by aging demographics. Hence, there is a distinction between emergency level rates needed to prop economic activity away from danger zones versus equilibrium rates (Chart 3). For the U.S., we believe it has comfortably moved from the lift-off phase to the probing phase. Following four rate hikes and soon-to-be execution of balance sheet run-off, the Fed has far less runway in its rate adjustment cycle than other countries.

On the other hand, the Bank of Canada, Bank of England, and European Central Bank are just starting or are preparing for lift-off. Current policy rates are still at emergency levels first introduced to combat falling commodity prices, Brexit, and sovereign debt risks. Though these effects still linger, a solid macroeconomic backdrop will provide sufficient cover to adjust course and tighten policy. For Canada, this means more rate hikes this year and next. And, for the UK and Europe, forward guidance of less monetary easing later this year and potentially hikes in 2018. Outside the U.S., the lift-off stage has quite some time left to run as there is significant space between real policy rates and the level of real rates that would start to choke off growth. How aggressive these central banks are with rate hikes will determine how quickly we get to economic pressure points.